Today dawned dull and grey. Since there’s not too many features to navigate by on a glacier it was going to be a learning day. First we defined our goal (some slopes that looked skiable to the north on the NW flank of Clemenceau Peak itself); did some map and navigation practise and wrote up a whiteout navigation plan. Basically the plan involves taking bearings to defined points on a map, following such bearings for a set distance then repeating again and again. Useful exercise for an overcast day where objectives would necessarily be limited by lack of visibility. I found for myself that the hardest part is to guesstimate how much distance you are covering on a glacier and that its very easy to overestimate the distance covered. The second tendency is to deviate from a straight line while leading on a rope; so its useful in that event to have the people roped up behind you tell you when you’re deviating. 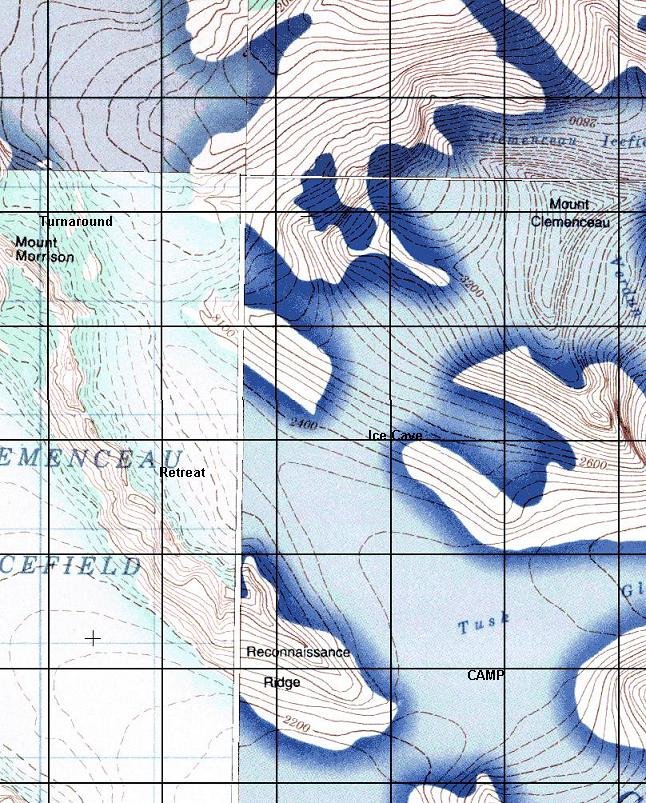 Here’s a window of visibility mid-tour. The light is not good enough to show that its pretty windy. Winds are from the south east. Behind Jonny is the peak of Mt Clemenceau with the standard west face approach plain to see. The route we would have taken if weather had cooperated would be between the bergschrund protecting the west face then a quick approach via the north west ridge on the skyline. This view looks south east to Tusk- Clemenceau Pass.

We then try to approach a east face on Reconnaisance Ridge. Its pretty windloaded and there’s some tricky navigation around nice – sized crevasses that would make good terrain traps. The snow starts sluffing at about 2550m – about 150m up from the icefields floor, and shortly thereafter we stop to dig a pit. Results are pretty lousy CTE 0 (CS) (dwn 20) so we back off. Its quite an object lesson in how windloading can adversely affect snow stability. Too bad really as the slope looked so tempting.

We continue ambling on to a ridge on the east shoulder of Mt Morrison and get to look at some pretty impressive peaks. Mt Clemenceau is the most impressive face of course and this view looks east to its north face. Apparently some nutbar has skied the north face of Clemenceau. The route follows some chute that’s hidden from view and is clean; no rappels involved. Behind Clemenceau, peaking out from the clouds is Mt Broulliard 3065m. The burn below extends into Broulliard Creek and is good tree-skiing if weather craps out badly. 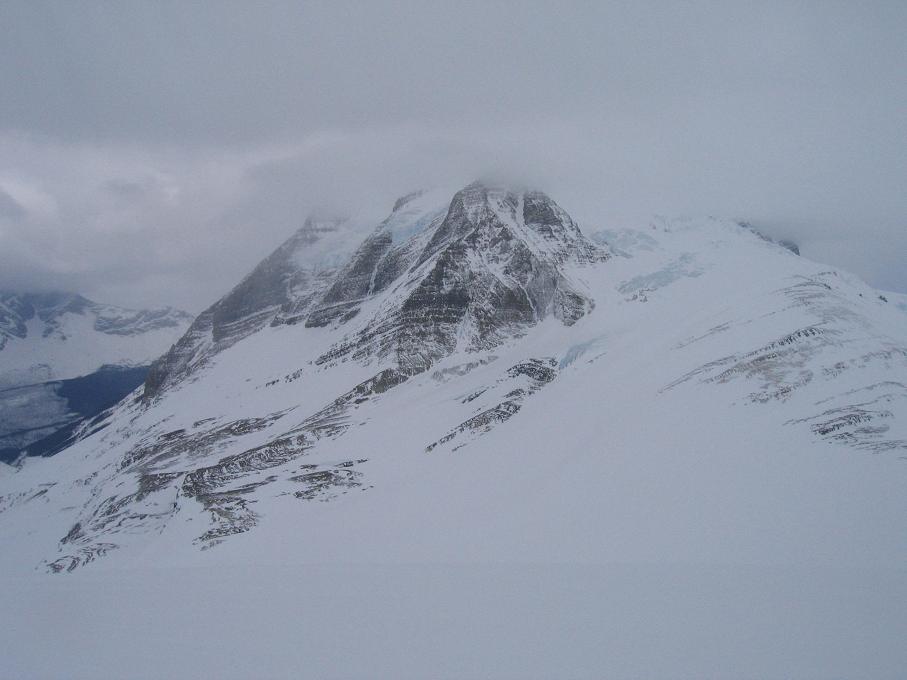 This is our turnaround point and there doesn’t seem to be much point in continuing as further objectives are a little too distant to push for if weather deterioates further so we amble back. Of course, just as we return to camp the visibility improves! Here’s the view from Tusk – Clemenceau Pass looking to YoungHusband Ridge. The logical route to the Columbia Icefields would on the north side of YoungHusband Ridge avoiding the Duplicate Glacier to the south.