The weather breaks for the better in the morning and we are rewarded with spectacular views. This 360 degree pano from base camp starts out with a view west to Cummins Glacier and takes in views from the northern Selkirks to the Central Canadian Rockies.

Here is a view looking north up the Clemenceau Icefield and the route we took yesterday. Visibility is considerably better; the ice-cave we visit is on the ‘schrund lining the valley floor – and another view of Clemenceau – a mountain with which I am getting a little obsessed I guess.

Unfortunately the Rockies giveth and the Rockies taketh away. Impending storm clouds come at us from the Selkirks; Sharon looks concerned.

Here’s Jonny in the kitchen cooking up a storm not letting the quickly building storm faze him. 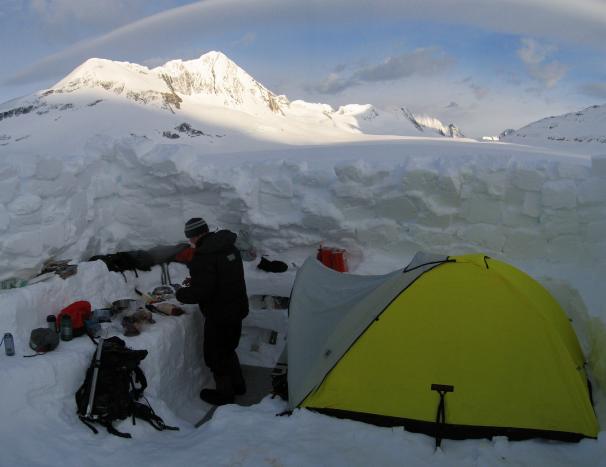 Jonny in front of the east face of Tusk which apparently might offer some good multi-pitch climbing summer routes.

Testing out our palatial bathroom. Quite the view we gave ourselves there. 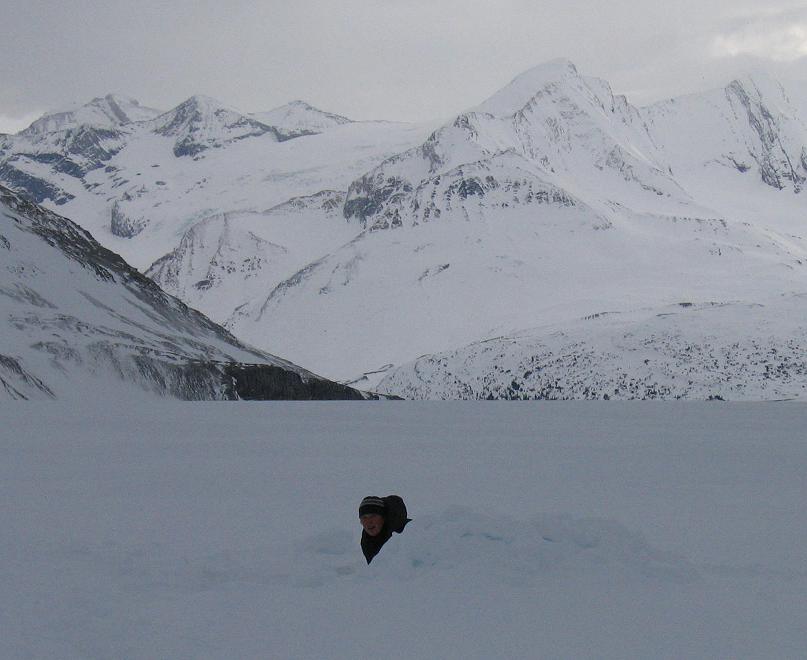 Well, the weather craps out again. We decide to make the best of it and go ice-cave touring. The ice cave itself is not much more then 2km from camp and shortly we are there. We don’t spend too much time hanging out under these nasty looking ice chunks. 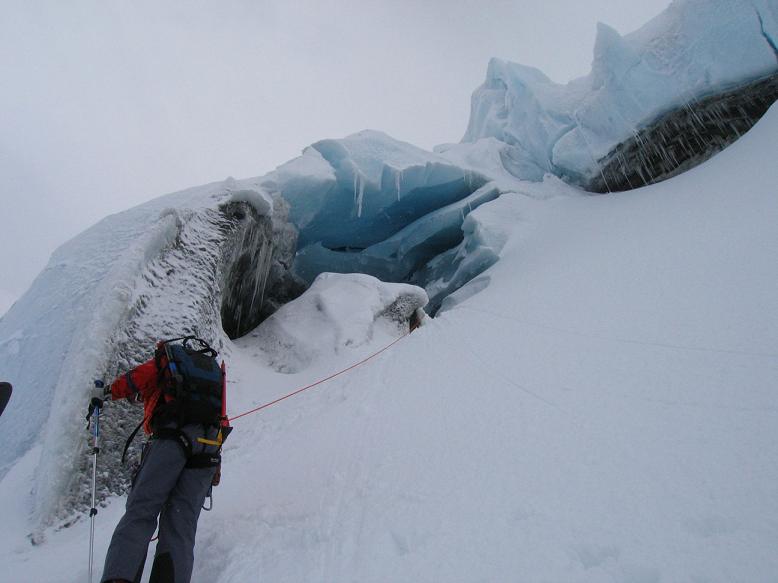 First check out the ice-cave for monsters, yetis or people-swallowing holes. Glacial blue ice sure is something to see. 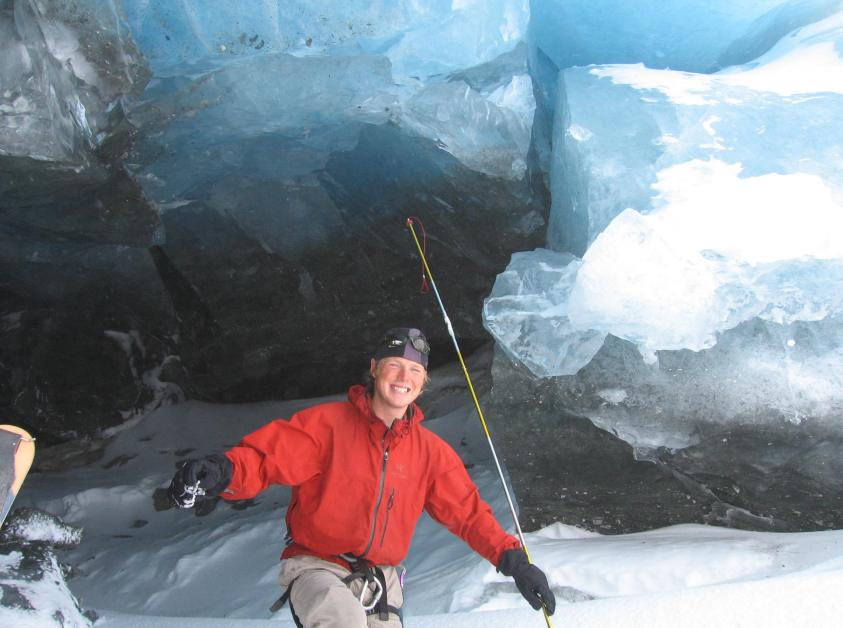 An ice – cave is a nice quiet place to sit out a wind storm. 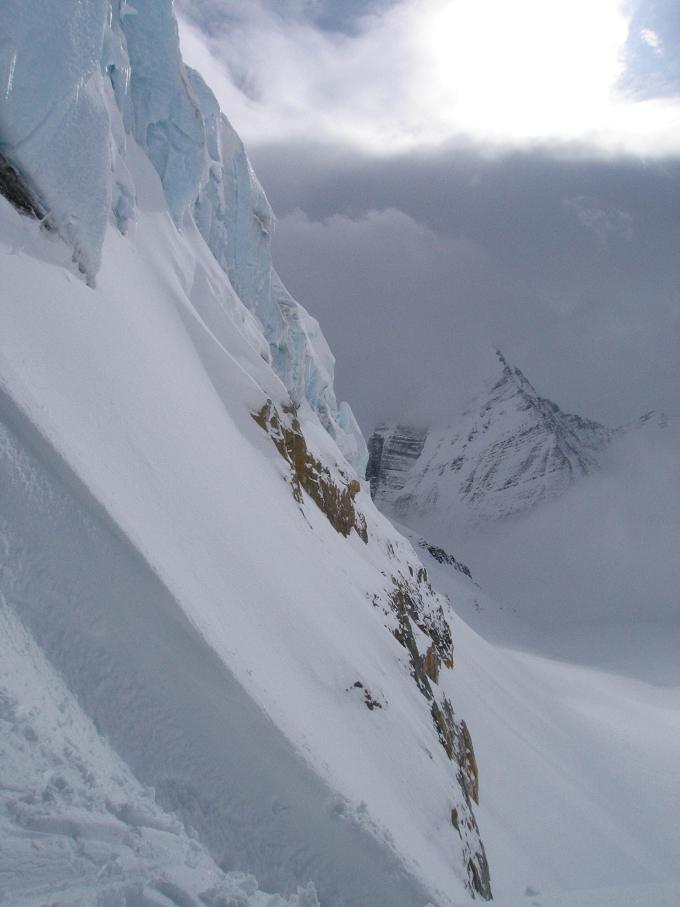 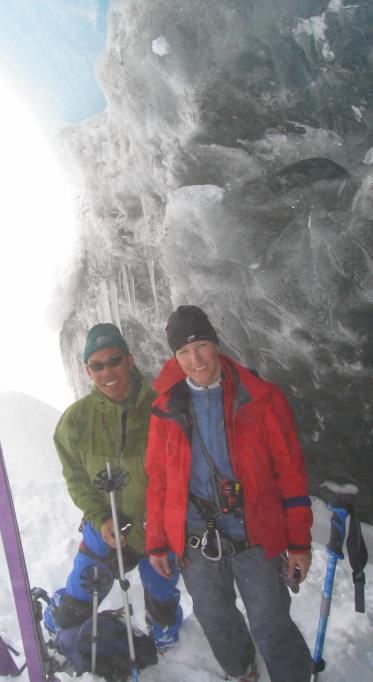 After doing some dicking around playing with ice screws and practising building ice anchors and just generally taking in the fact that we might be the first humans in this place for a long – long while its time to take advantage of a lull in conditions outside and head down to valley floor. Here goes Sharon. 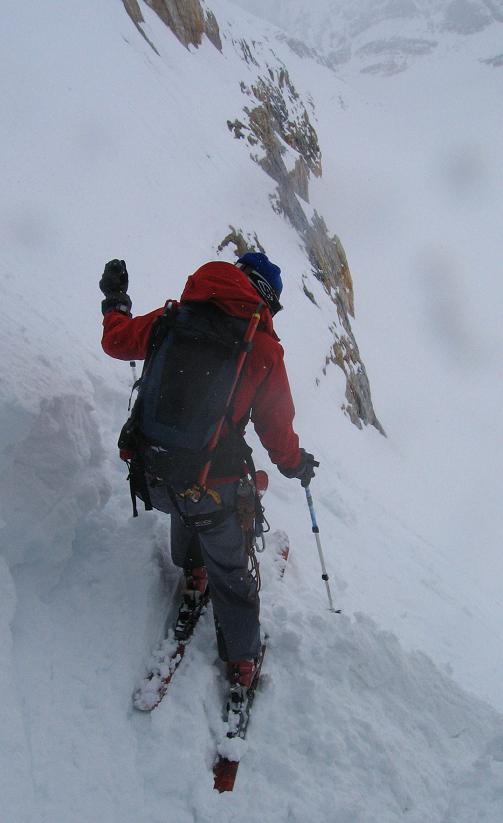 The slope actually isn’t too bad and its sluff management practise on the way down. Shortly thereafter we’re back at camp where we’re astounded to see a group of four tourers ski in. They’re on the first leg of the Great Divide (Jasper to Banff) ski traverse and are here to pick up a food cache. They’re a hungry bunch having run out of food the day before and their trip so far makes for good entertaining story-telling. After they leave we have to decide what to do as the weather still looks like dogmeat.. We put it to discussion and Sharon wants to head to the Laurence Grassi Hut. Since its not too far away and since we’ve actually paid good money to book it we decide to head there. 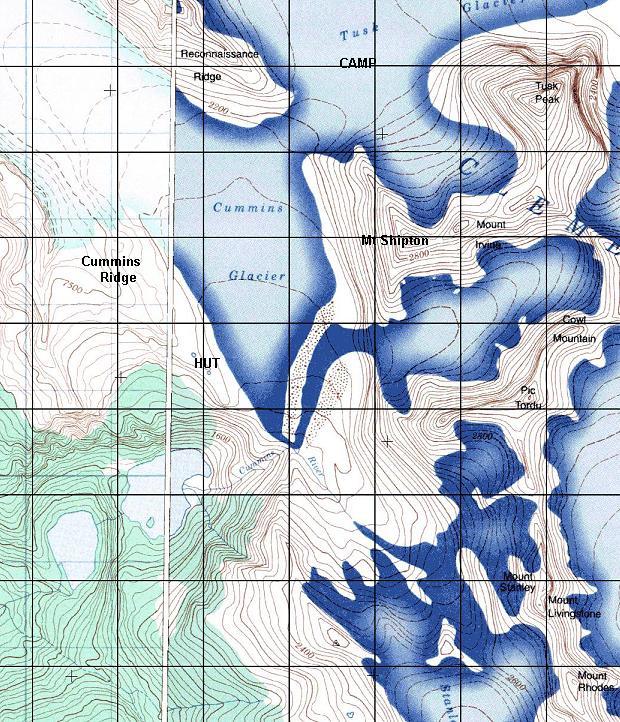 Route finding isn’t as tricky as initially thought as the cloud clears a little. There are nice sized slots in the Reconaissance Ridge – Shipton Col. Also I learn that skiing down roped up trying to follow the leader isn’t easy when you’re playing dodge-the-crevasse and especially with a big pack. After about an hour and a half we’re at the hut. You guessed it – the weather clears up! That’s the name of the game in the Rockies -if you don’t like the weather – wait five minutes.

Here’s the view looking east from the hut. Three thousand meter peaks whererever you look. The serac at the Shipton – Tordu Col has recently let go – it sounds like thunder or a big plane when it falls.

Here is the view looking north up the Cummins Glacier towards Reconaissance Ridge. The west face of Shipton begs to be skied. Its about 50 degrees at the top and 45 in the middle and you would have to contour skiers right before you hit the rock band protecting the last few 100 or so meters of the face.

The interior of the hut itself is a little stuffy but comfortable. Unfortunately past visitors have left lots of white gas containers but otherwise the hut is in good order. The past visitors have also left cards. Here Sharon shows Jonny how to not get cleaned out in a hand of poker. 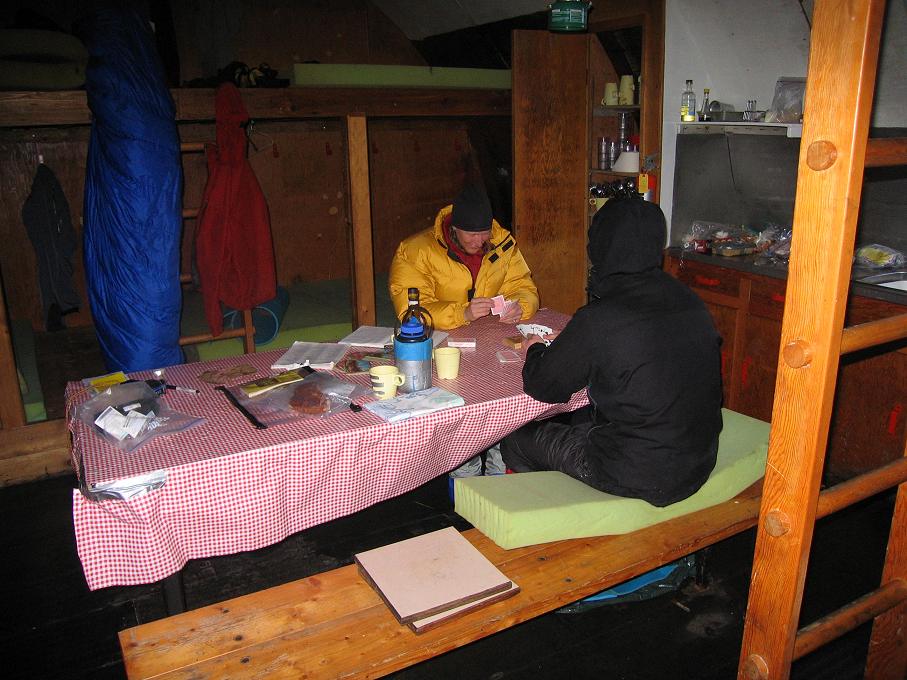