After the 1st week of bike touring (click the links above to see what we did) it was time for Sharon to settle into the routine of aikido in Corner Brook. We stayed at the residences at Sir Wilfred Grenfell College – NOTE TO SELF – next time spend the extra money and get some place with beds that do not suck and kitchen appliances and cutlery.

As well as being quite run-down the student residences at Grenfell are awfully cut off from the rest of the town.

There’s not much to do in Corner Brook proper. Actually, after the relative isolation of the northern part of the west coast of Newfoundland, it was a shock to be in a town with traffic lights. Its a local hub and a no-nonsense business town with close access to recreation – bike trails are close by as is backcountry skiing in the Blomidon Mountains and xc-skiing on the local golf courses and groomed trails. Like Prince Rupert in British Columbia, the sole purpose of Corner BrooksThere is an awesome bike shop called Cycle Solutions – stop by there for local beta and for friendly service. Peter, the owner, is a really nice guy who’s very involved with the local biking community and a wealth of local information.

On my first day in Corner Brook I had intended to veg but got talked into doing the Admiral Palliser Trail which runs on the north side of the Bay of Islands from Corner Brook to Cox Cove. 96kms and about 2000m of climbing later I was well and truly cooked; there are a lot of sharp ascents there which make for fast ripping road descents but also lots of grinding climbs. That ride pretty much wiped me out.

Riding by Irishtown, here’s a pretty common site – a “mother-in-law” door. It seems that property taxes cannot be increased for houses while the houses are being renovated. Therefor, home-owners have a very rational economic reason to procrastinate and hold off on finishing up their renovations. 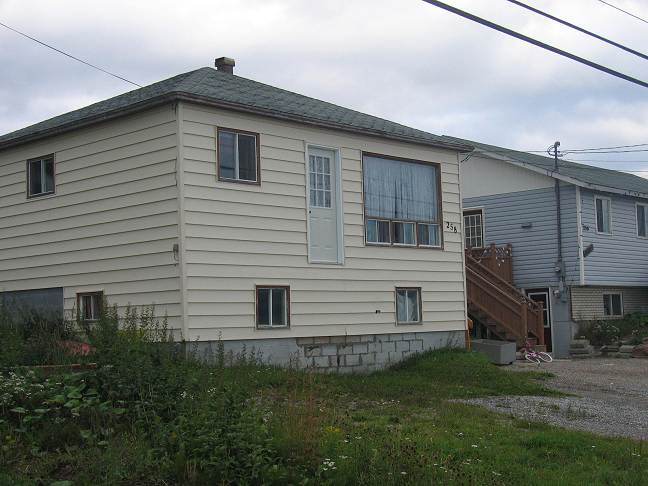 Here is a typical sight – a deserted road into a gorgeous cove – perfect for road-bikes. 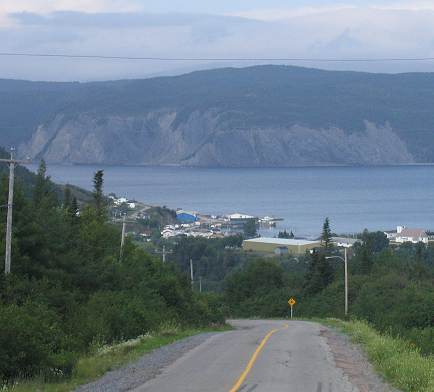 Cox Cove, the terminus of my ride, is a fishing village facing north into the Bay of Islands and is at the end of a particularly steep downhill – soon to be out-of-the-saddle gruelling uphill.

I found time on the way back to take this picture of another typical sight in McIvers. It seems that almost every Newfoundland town is either waterfront or water-view. 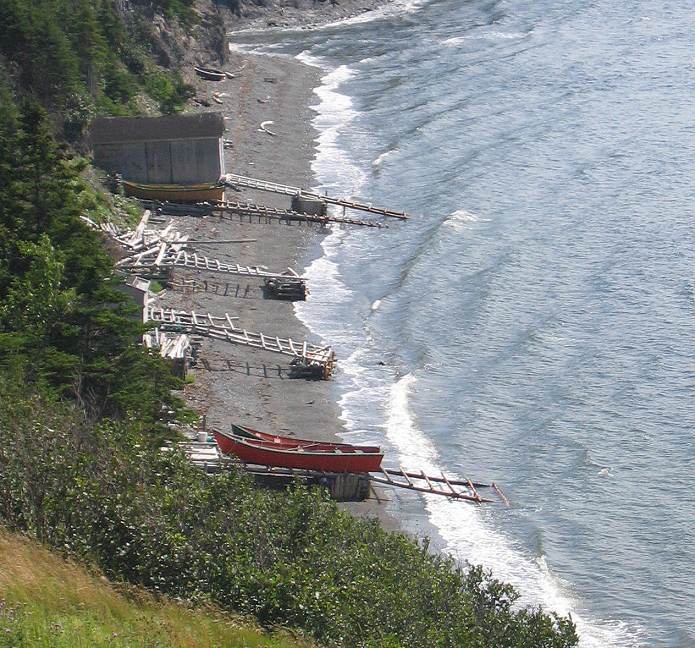 The next day I had wanted to ride Captain Cook’s trail – on the south shore of the Bay of Islands. This was purported to be a 110 km road ride but I was pretty much toast so it didn’t take very much for Vidas to talk me into going to Gros Morne for a hike to the Tablelands. On our ride there last week I had missed out on hiking into the Tablelands. Going there with Vidas – who is a geologist – proved to be an immensely enjoyable and entertaining experience!

First thought we had to visit Marble Mountain, a local ski resort. Seeing a lodge as big and grand as this was not something I expected!

It’s even more surprising to find out that it is the government of Newfoundland which has been so progressive as to build something this impressive.

It seems that Marble is now attracting visitors and package tours from Europe causing a mini-boom in adjoining real estate prices. It has impressive relief of some 500m vertical and virtually no crowds. Apparently it has skier visits of only about 85,000 per year! That’s what Whistler will do throughout a couple of good weekends!

Seasons pass’s are $ 259 – encroyable. This view shows the ski hill and the run OMJ (Oh my Jesus) to picture right.

After some more sightseeing, we are off to Gros Morne National Park and the Tablelands. Here is the view as the iron-laden mantle rocks of the Tablelands peek out from the forests on the drive from Wiltondale. The houses in the foreground are the town of Woody Point, which has tourism services centred on the Tableland.

If not for Vidas, I would have thought the Tablelands were just sensationally vivid-coloured rocks. Hiking the Tablelands with a geologist, who wanders around as if he’s in heaven on earth, is not just a visual treat but also a crash-course in spectacular geology.

Here I am standing on the Tablelands MoHo. The Mohorovicic layer or discontinuity is actually the layer between the earth’s crust and mantle. And you thought this was just more tuckamore and heather scrambling to eke out an existence on the Tablelands.

The next day, we head back to Gros Morne National Park, this time to climb Gros Morne, at 807m, the second highest peak in Newfoundland and the scene of spectacular views. However, we are not blessed with the same weather as before.

Vidas and I contemplate the weather; in the centre of the picture is a talus slope one has to scramble to gain the peak 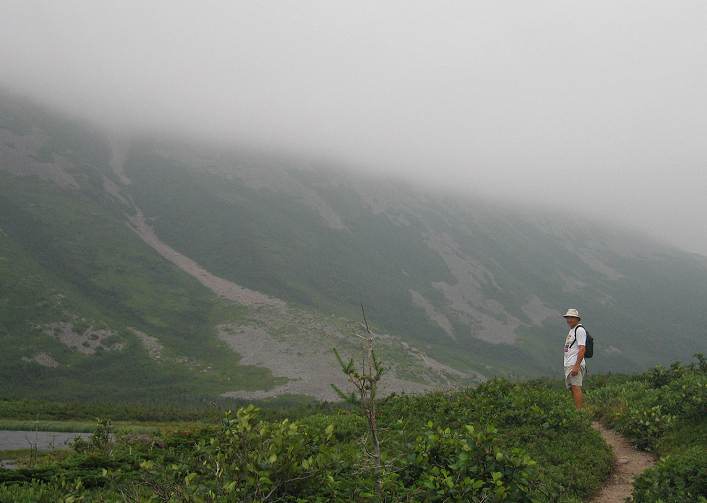 We debate whether or not to try for the peak but being guys, decide to go for it. Here’s the view looking down the talus slope. In the picture are Dana Gallant of Pedal and Sea Adventures (orange hat), with whom we bike-toured last week; and two of his clients. Later I learned they turned back due to the poor visibility. 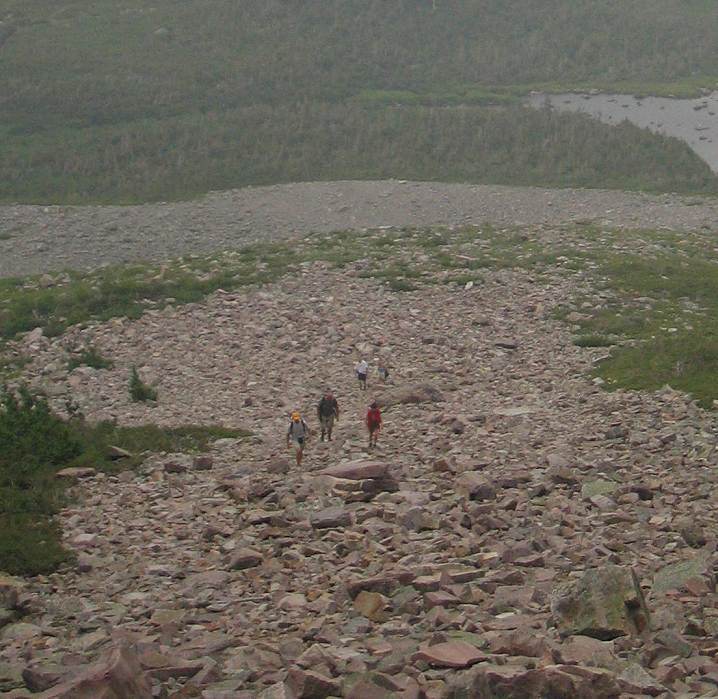 We made short work of the talus slope and the scramble (Class 3 on loose rock with little exposure).

Despite the thick fog, the trail was well-marked with cairns. Here I am at the peak – clearly the view is not what it should be. 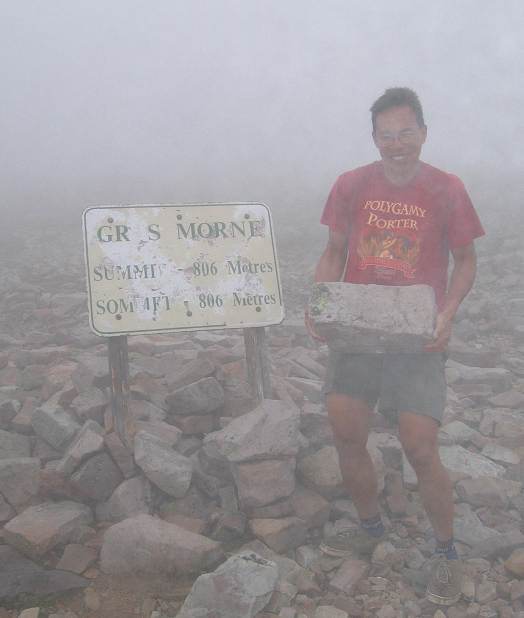 The descent takes a little longer then the ascent due to the way the exit trail meanders around the mountain. We did the entire hike from parking lot in just shy of 4 hours. 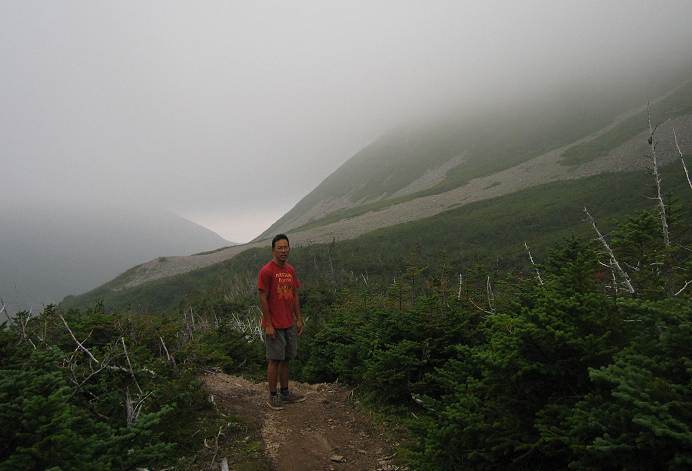 The next day I rested. The aikido’ists arranged a boat cruise around the Bay of Islands and I took the opportunity to rest my beat up legs and bond with Sharon 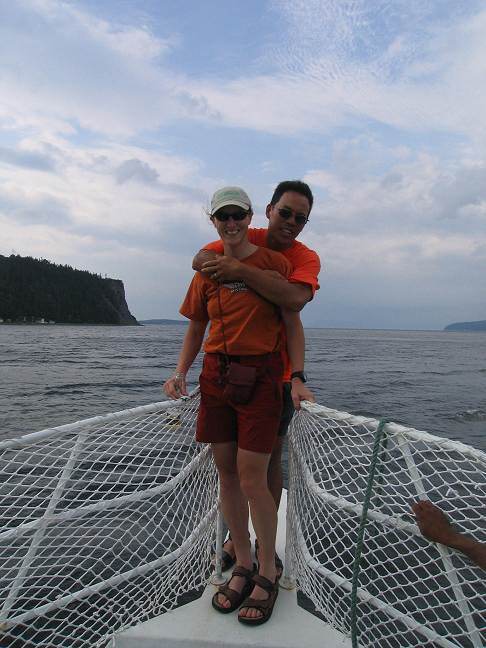 This entry was posted in 2005, bike and tagged newfoundland. Bookmark the permalink.