The next nday we’re off to a ridge which isn’t named on the map. Its just south of Elgood Creek so Elgood Ridge is good a name for it as any I guess. Before I start though a plug for Angela’s Bed and Breakfast.
If you want to sleep in a snowcave then go ahead by all means. If your city-bred ass don’t mind getting pampered a little then go to Angela’s. She has quite the view of Rossland from her place.

Angela not only serves a mean breakfast 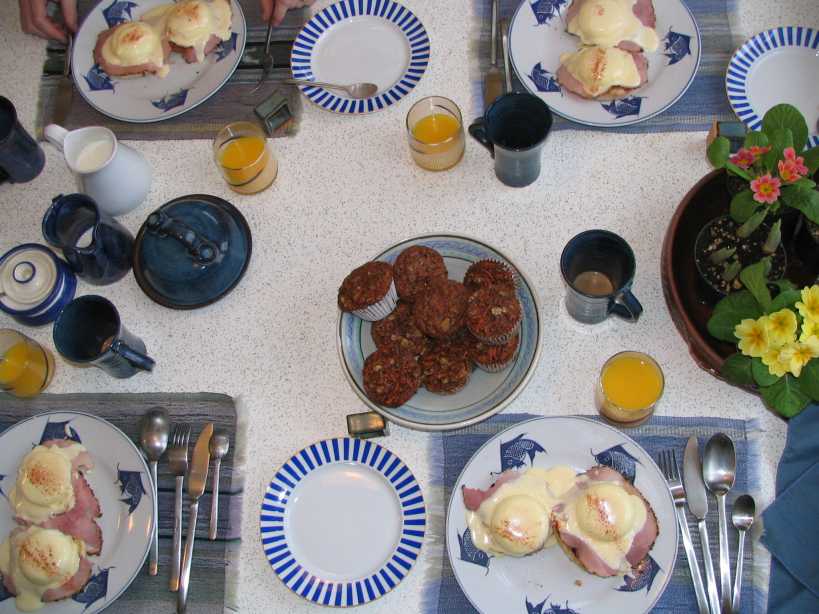 She’s probably forgotten more about Rossland and the surrounding area then most people know. And oh yeah, don’t cut in front of her on a powder day. 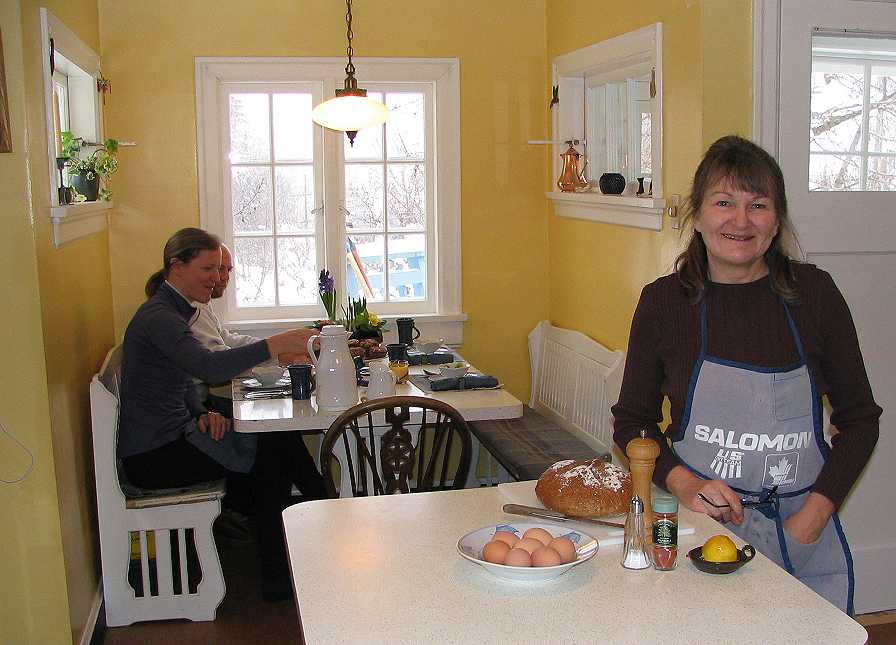 Angela also has multiple lap-warmer cats for your heating pleasure. 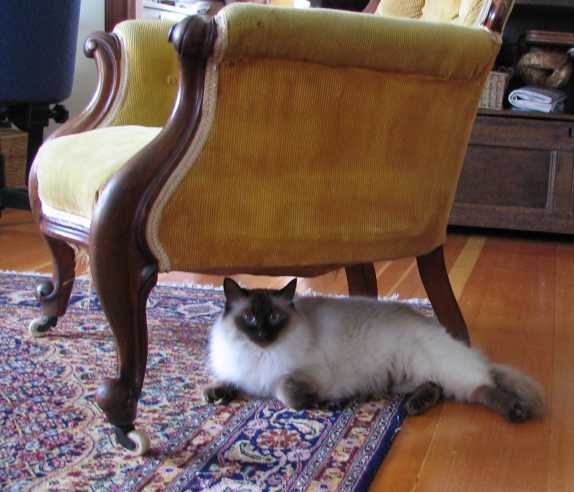 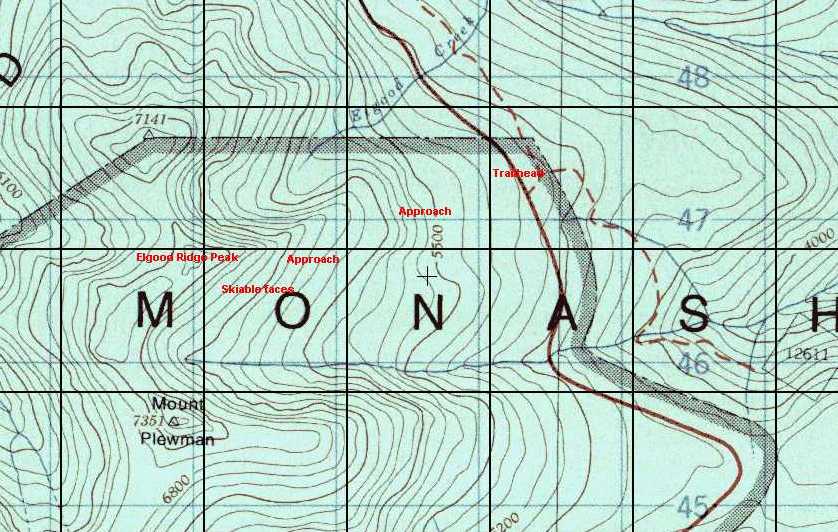 The view from Plewman Peak which we skied before actually gives one a good view of the Elgood approach. You approach from the cutblock in the right of the picture and pick any line to ski coming off the ridge. What’s nice is that the conditions today are about the same as yesterday; cold in the valley and warmer at the peak. The aspect we ski is also the same.

I forgot my skins at Angelas duh! So I drive back and let Aaron and Sharon break trail. Half an hour later I’m back and skinning up their track. Here’s the view down the valley looking east just before I go into the trees. Neptune Creek to the left of the picture also has some neat touring – we saw skin lines all over the place. I think thats Kootenay Pass and the Salmo-Creston area in the right of the picture. There’s endless possibilities.

Sharon and Aaron are no dummies and let me catch up and break trail. The approach is pretty easy. There’s some whumpfing in the trees at around the 1800 m elevation level – snow pack settling i guess – but there’s no whumpfing the higher we go. Trail breaking isn’t too bad till we get to the exposed part of the ridge near the top where there’s a bunch of wind-scour. Every step is slow and the ridgeline itself has a nice steep 35-40 peak which hasn’t quite become corniced yet. I don’t fancy being that exposed and am not into bagging peaks in any event so I decide to give up on the last 50 m of climbing. 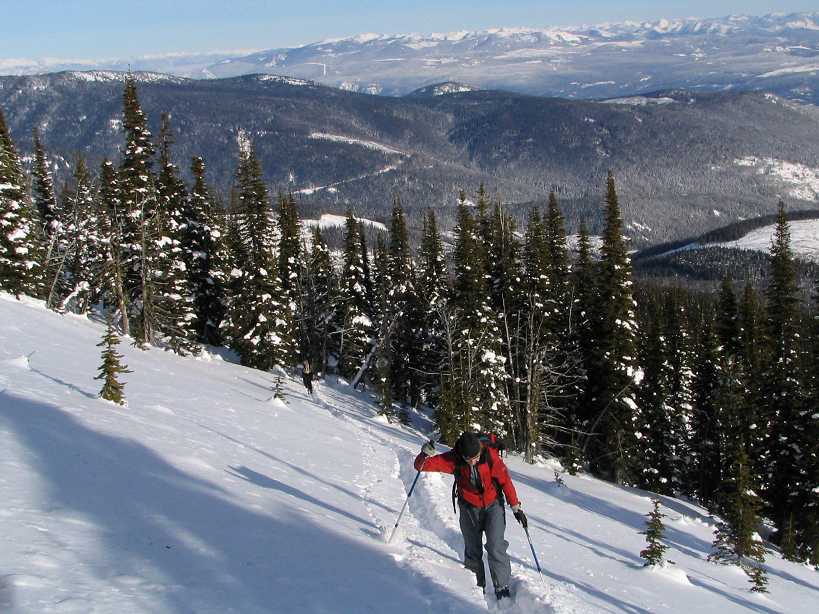 The snow on Elgood is just as light and fluffy as it was on Plewman; not surprising since its the same south-east face. Pit results are about the same. Relatively stable snow going on a 5 in the pit. There’s definitely a layer which I was told was a mid-December rain crust. There’s more snow on top of this crust on Elgood then there was on Plewman. Here’s Sharon testing the slope 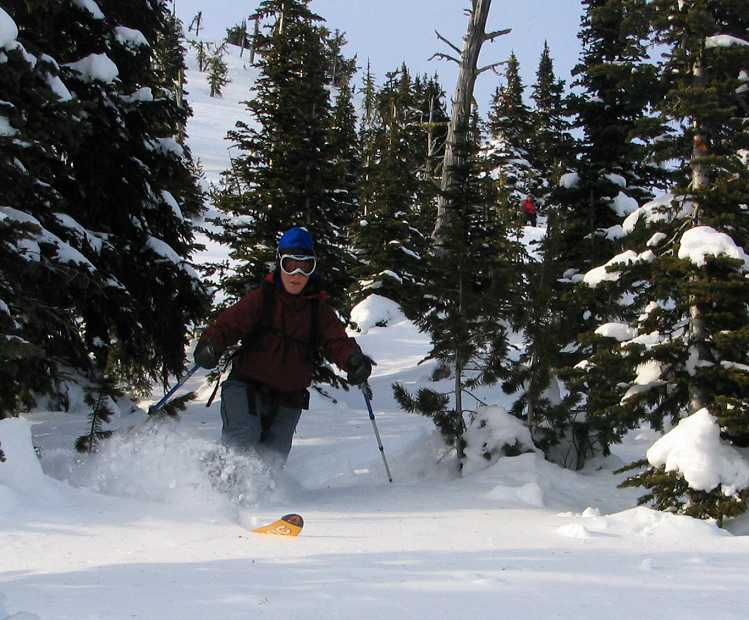 Aaron going for it. Nice view of the Valhallas in the background in the second picture 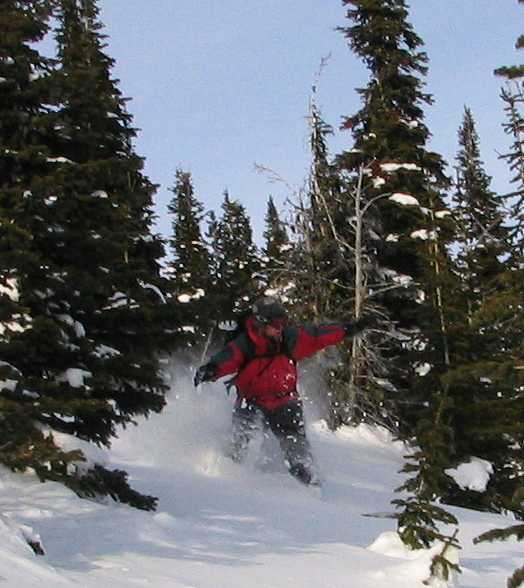 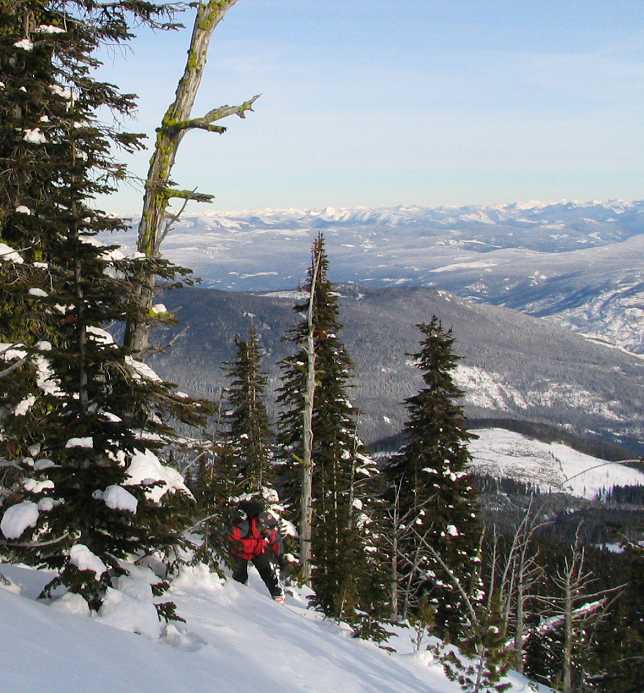 I think we might have done better going down skier’s right and maybe ducked in a little too early off the ridge line. The more open slope goes for about 150 m; then becomes glades and gradually gets thicker but not too thick to stop nice turns. Then you enter the creek and contour back to the clearcut. The next day January 16, it was quite a bit warmer (-10 or so). Being a little more pressed for time to get back to the coast, we skied the east-facing face right down our skin line. There was a little bit of snow – maybe 5 cms at most – but not enough to bury the previous days’ skin track. If anything the snow pack appeared more stable. No whumpfing on that day. Skied the one line and got more fall-line then we did going down the south-east face. Then back to Vancouver and the rain. … sigh.

This entry was posted in 2005, ski and tagged elgood ridge, rossland. Bookmark the permalink.