From Vernal at about 4000 feet we drove into Colorado up and over Douglas Pass over SR 139 to Fruita. Douglas Pass is at 8268′. The desert very quickly transistions to coniferous forest and aspens. 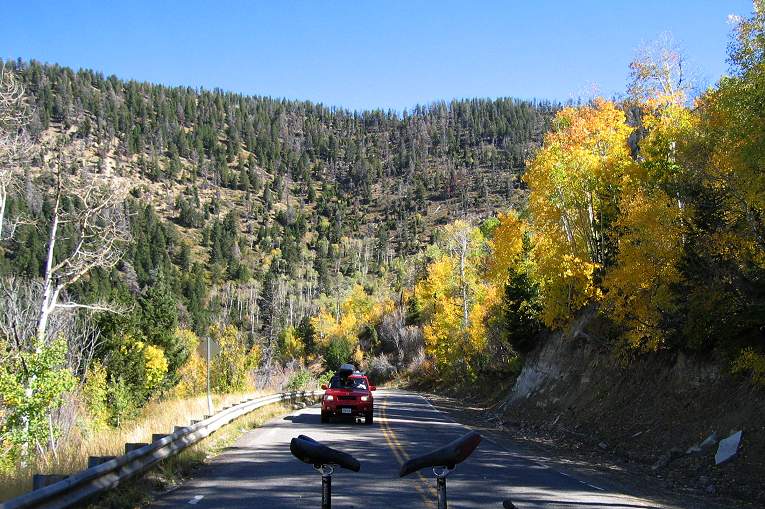 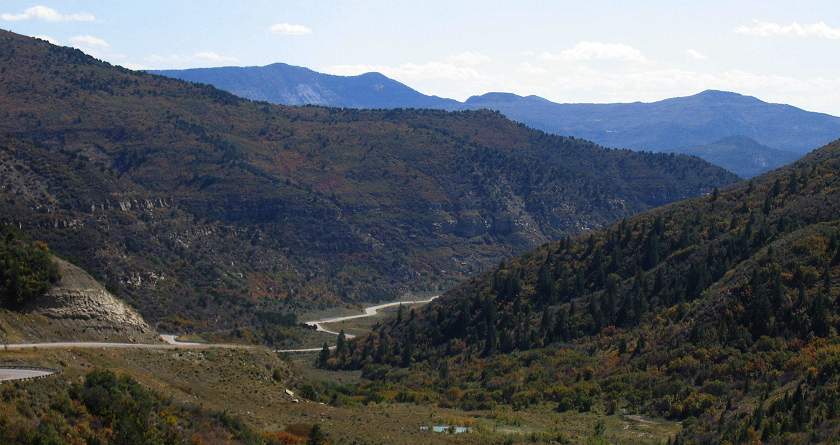 This looks north to Douglas Pass. The ridgeline ride of The Flight of Icarus is to picture right. There was snow at the pass so we turned back.

From the flats near Loma, about 5 miles west of Fruita, this view looks north and east to the Bookcliffs. There’s something about Fruita that makes me keep coming back.

More Bookcliffs. The trails of 18 Road are in the centre of the picture.

This magnificent panorama was taken looking south into the West Elk Wilderness and the West Elk Mountains. Although we were perhaps a week late for the best of the Colorado fall colors this was plenty spectacular. To get there we took SR 92 east from Delta then a little after Somerset took the gravel road SR 12 (West Elk Scenic Byway) which then heads over Kebler Pass (9980′) then to Crested Butte. The West Elk Mountains are the mountains on picture left. The tallest peak is West Elk Peak (13035′) farthest left then Ohio Peak (12267′) and Anthracite (12382′). The tall peak in picture center is Mt Gunnison (12720′). Beckwith Pass then breaks up the scene and the peaks on picture right are the East Beckwith Mountains

The peak on picture left is Marcellina Mountain (11,348′) , with Mt Gunnison on picture right.

The drive from Durango to Ouray is nicknamed the Million Dollar Highway or more pedantically SR 550. The views are breathtaking. These are the Hermosa Cliffs just north of Durango. 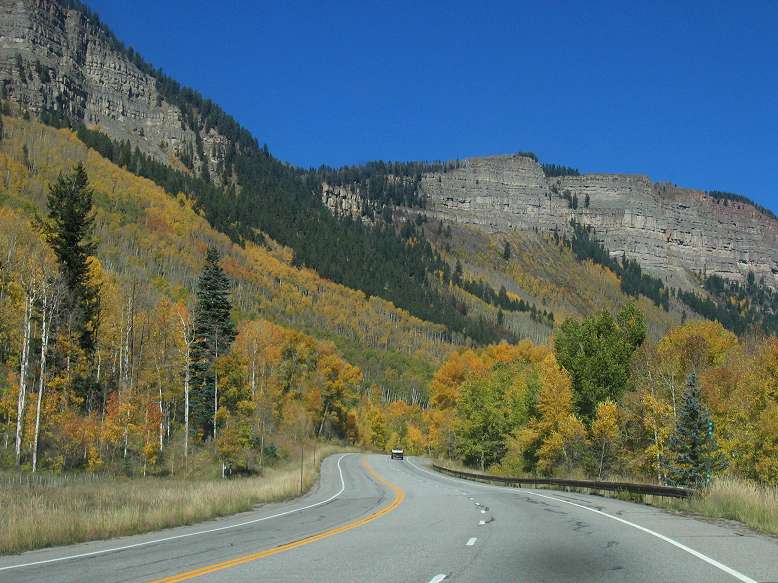 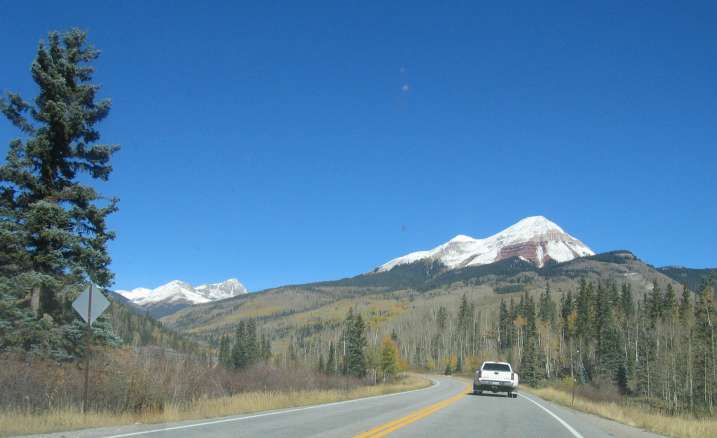 This view of Engineer Mountain is taken from the east as we head up and over Coal Bank Pass (10680′). This was taken before the trail head to the Colorado Trail. We would loved to have ridden this route but were stymied by snow. 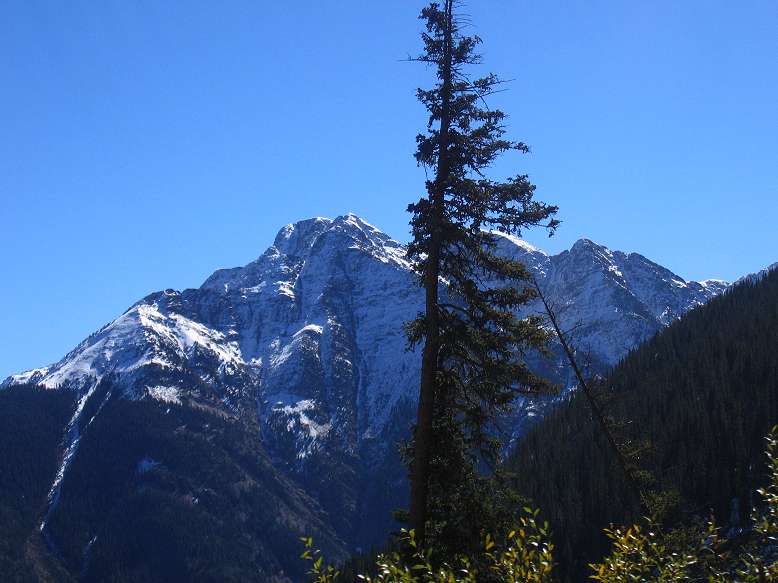 This view of the Twilights is taken just after cresting Coal Bank Pass and heading north to Molas Pass. You can easily see the distinct peaks of North Twilight (13075′), Twilight (13158′) and South Twilight (12932′). That would be quite the traverse to bag all three. 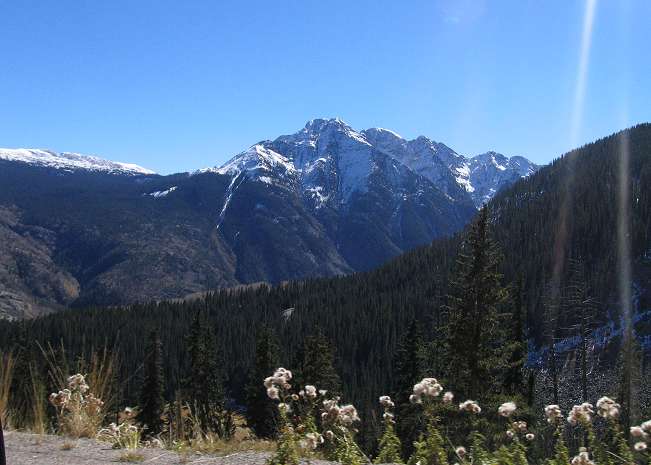 This view is from Molas Pass (10,899′) looking north towards Silverton and the Animas river drainage. 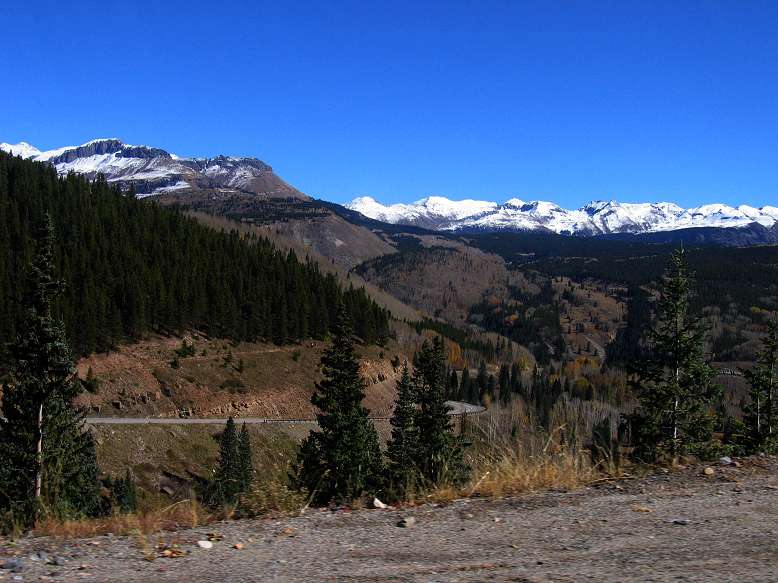 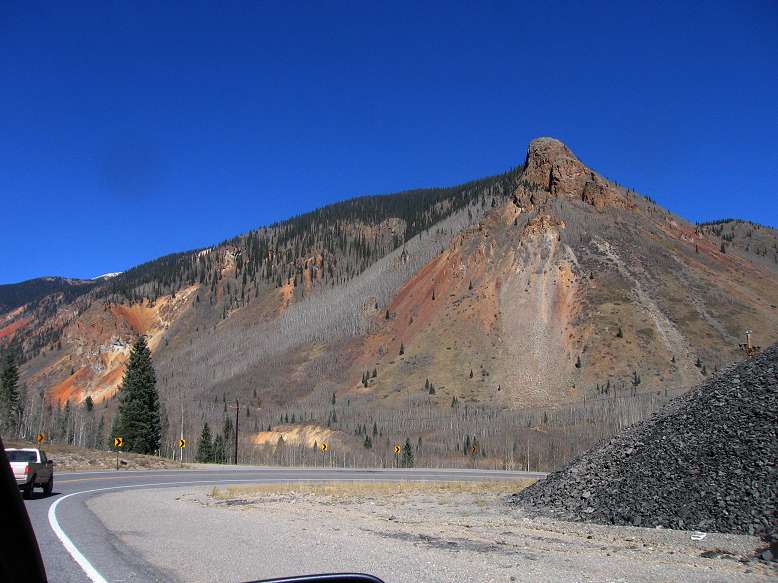 I guess the city fathers of Silverton weren’t too concerned that they were in the alpha angle of avalanches coming off Kendall Mountain (13055″) south east of town. Idaho Gulch points like a loaded gun at the works yard. 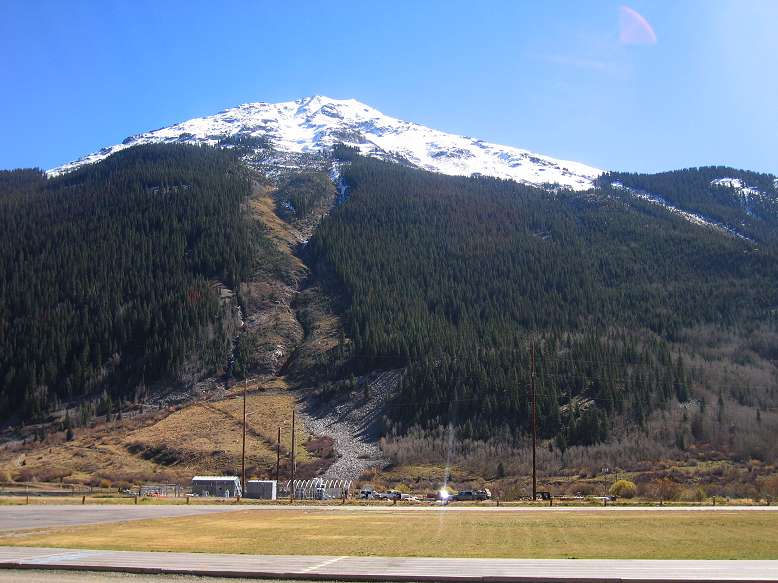 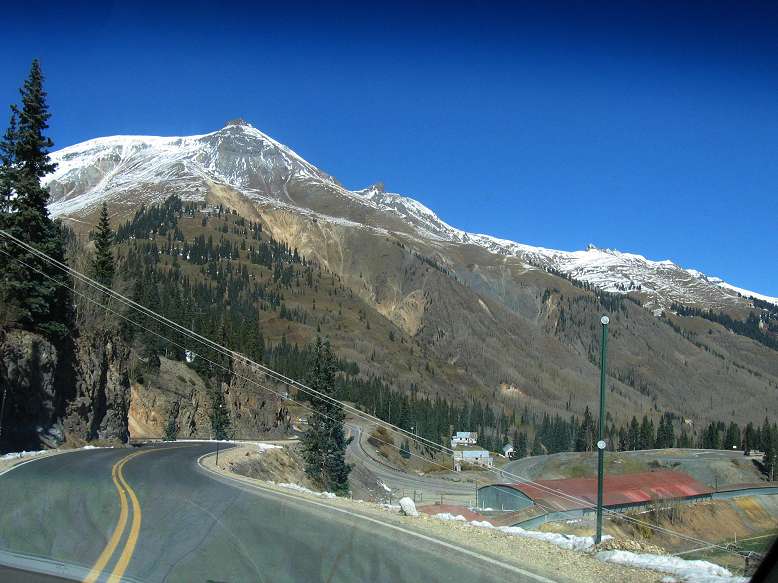 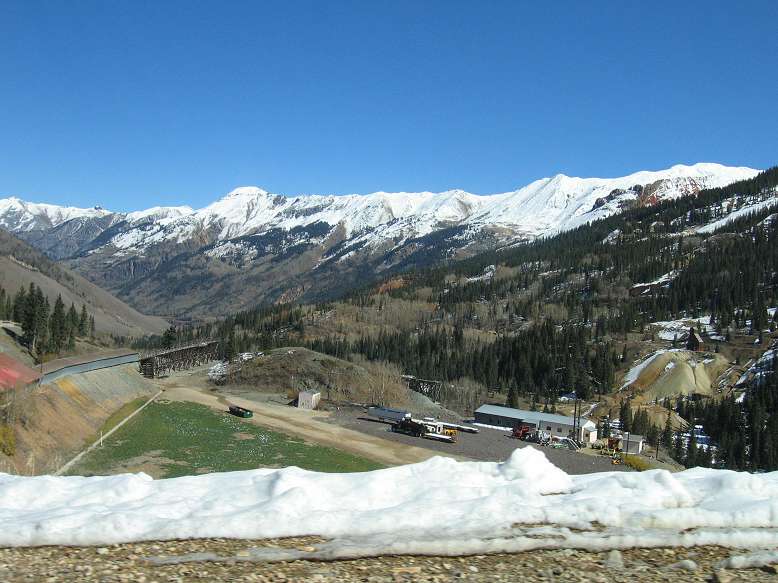 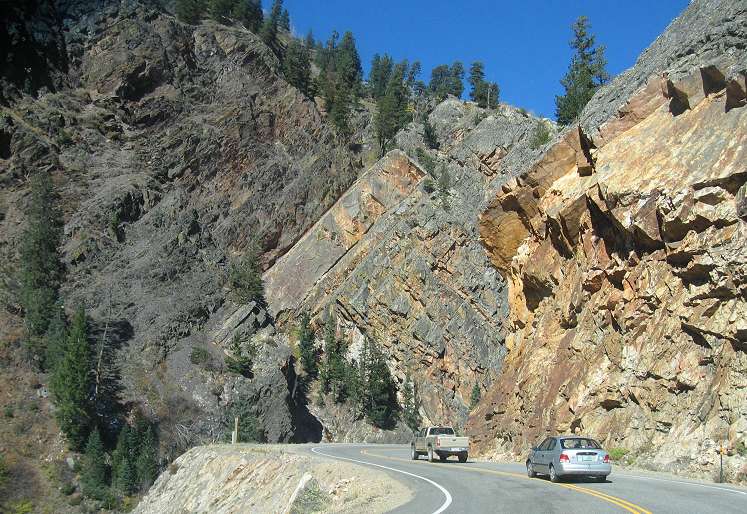 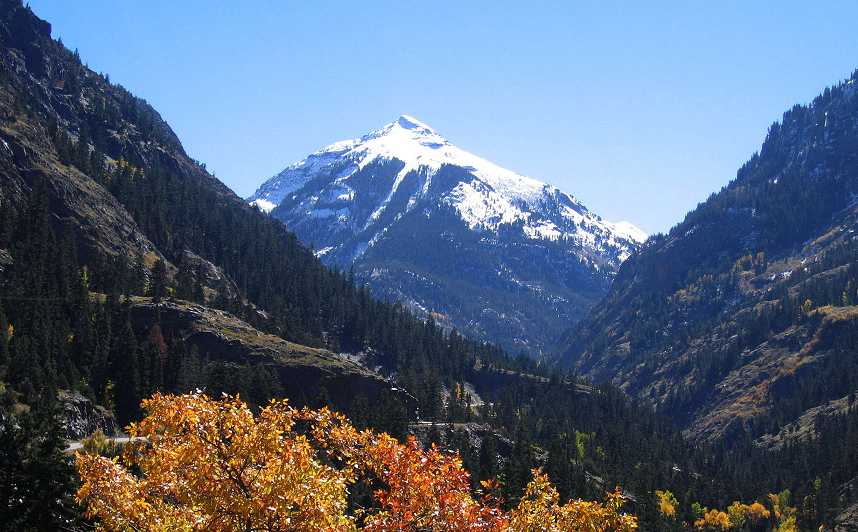 Spectacular view of the range called simply the Amphitheater to the east of Ouray. All these peaks are in the mid 12s to low 13s. 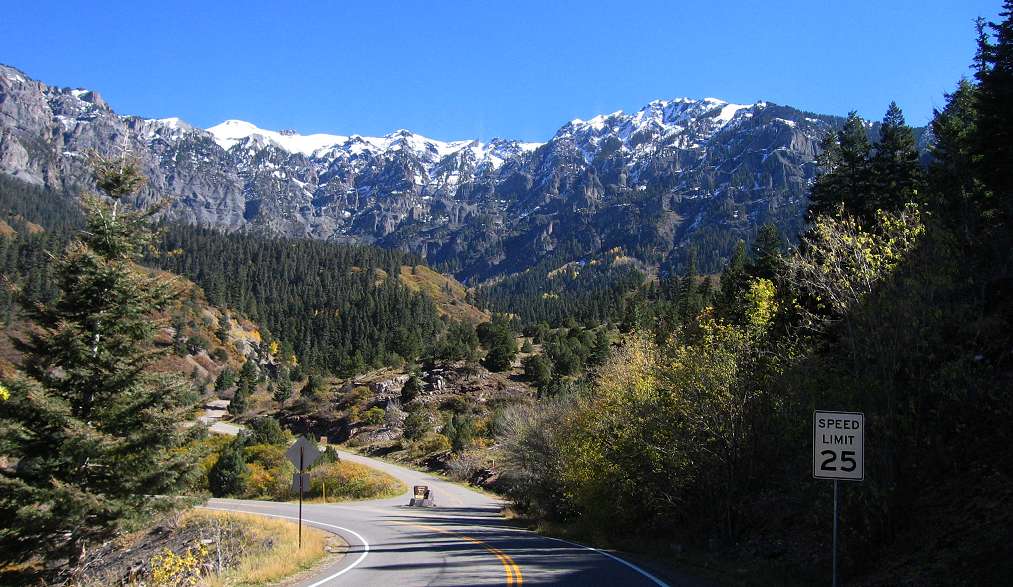 This entry was posted in 2005, bike and tagged Utah, utah2005. Bookmark the permalink.