The forecast had called for our good weather to crap out and crap out it did. Initially after riding our two day Vernal sampler we had planned to head to Crested Butte but getting snowed on while sitting in a tent and unable to ride didn’t sit well with the group so off we went to Fruita!

Good old dependable Fruita is relatively low compared to the rest of Colorado and is only a short two hour drive from Vernal. On October 3, 2005 we drove to Fruita over Douglas Pass then off to our regular campsite at Highline State Park. That day I managed to borrow an Edge Cyclesbike from my buddies at Over the Edgeand Brian and I snuck in a quick ride up Mack Ridge;

Lions Loop and Troy Built Loop on the Kokopelli trails. The next day the weather doesn’t look so great but its not raining yet so we rush off to sneak in a ride on the Kokopelli trails. First we warm up on the practise trails of Rustlers Loop. A good introduction to Fruita singletrack and the ethic of keeping singletrack single, unfortunately it looks like heavy use has made Rustler’s Loop not quite as pristine as it once was. 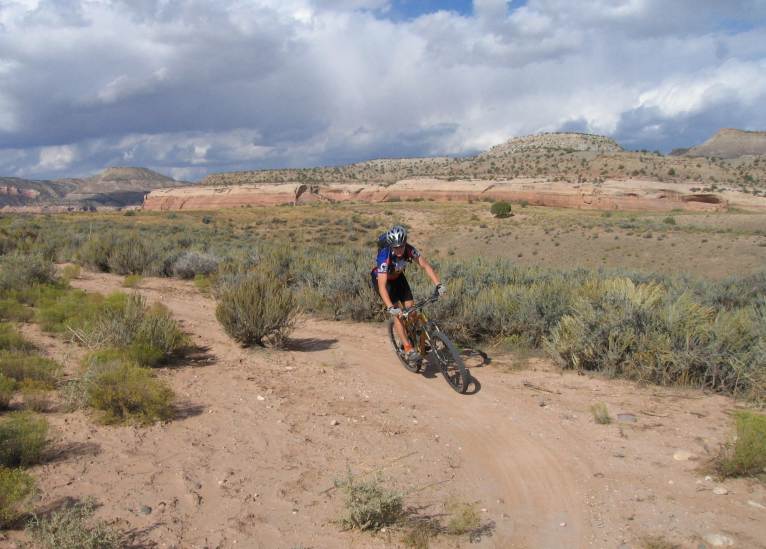 There’s still lots of places to mess around on the practise loop. 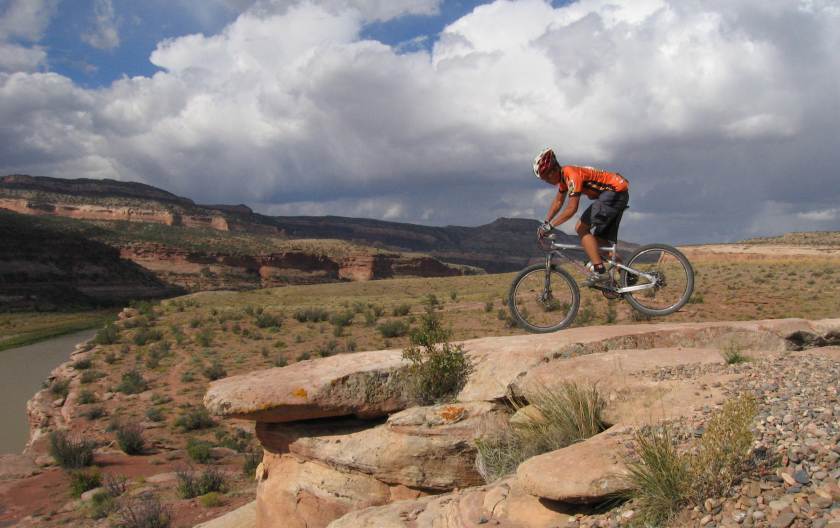 Brian feels a sense of deja vu – he’s been here before. Audrey finds it all fun 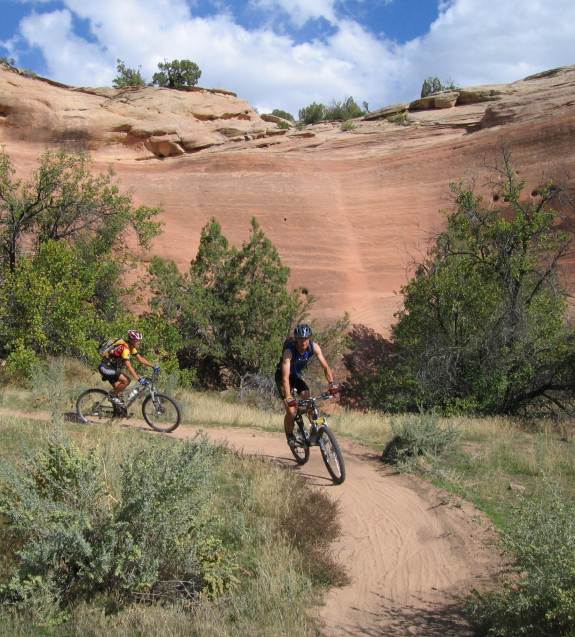 After the practise loop of Rustlers we’re off to Moore Fun. This trail is probably one of my favourite rides; period. For a rider who doesn’t enjoy technical moves – it might as well be a hike. Ledgy, tight, rocky, truly its a creation of a madman who loves climbing. I want to thank my good friend Kevin Foote for scoping out this piece of trail art. I’ll let the pictures do the talking. 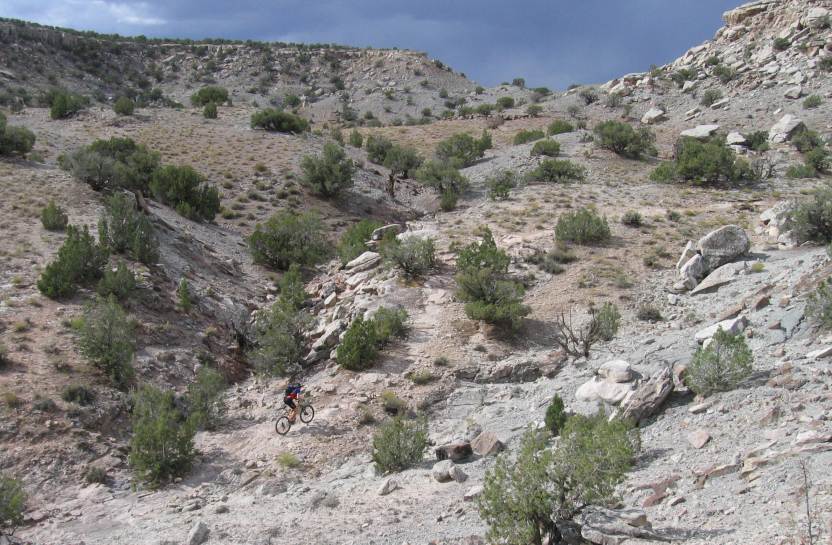 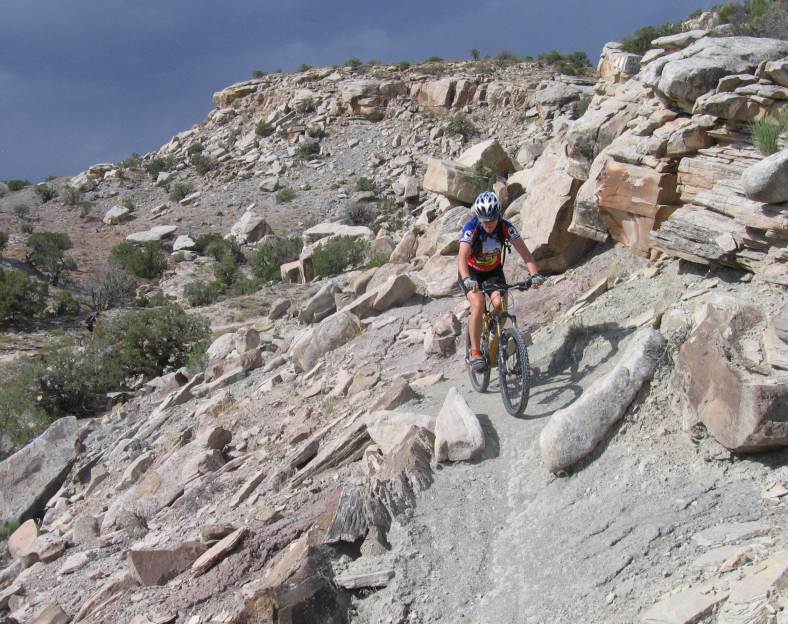 The rock ledges relent at about the 2/3rds point up the climb. The thunderheads are accumlating overhead and we can see clouds to the north and hear lightning on the ridge we are approaching. 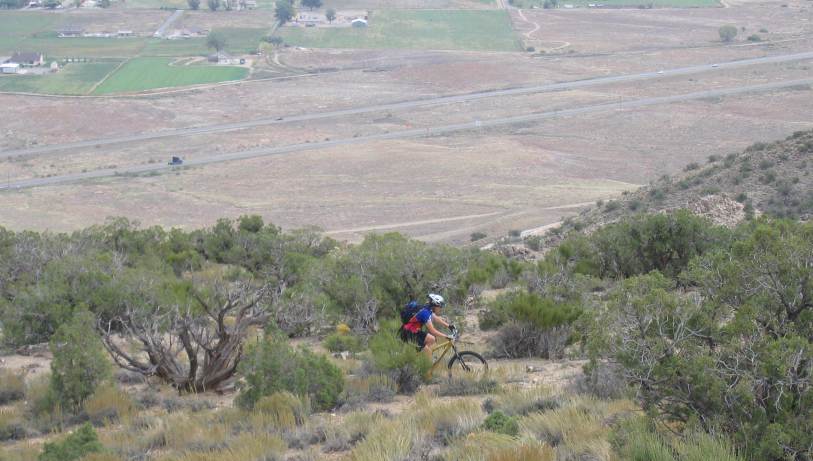 Here’s our turn-around point – the view looks east down the Grand Valley towards Junction. When you’re on aluminium bikes with metal cleats in your shoes it’s just not the greatest idea to tempt fate in a lightning storm. 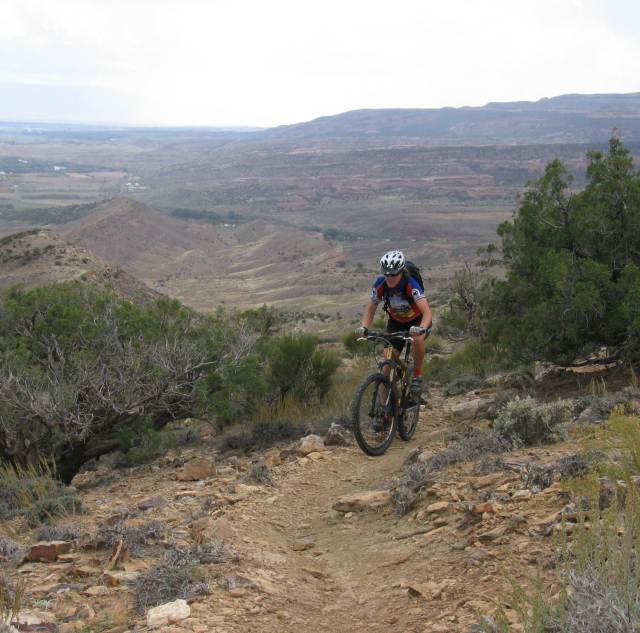 Here I am going for a rocky ledge step up immediately after a rock descent. Another trademark Moore Fun technical move. 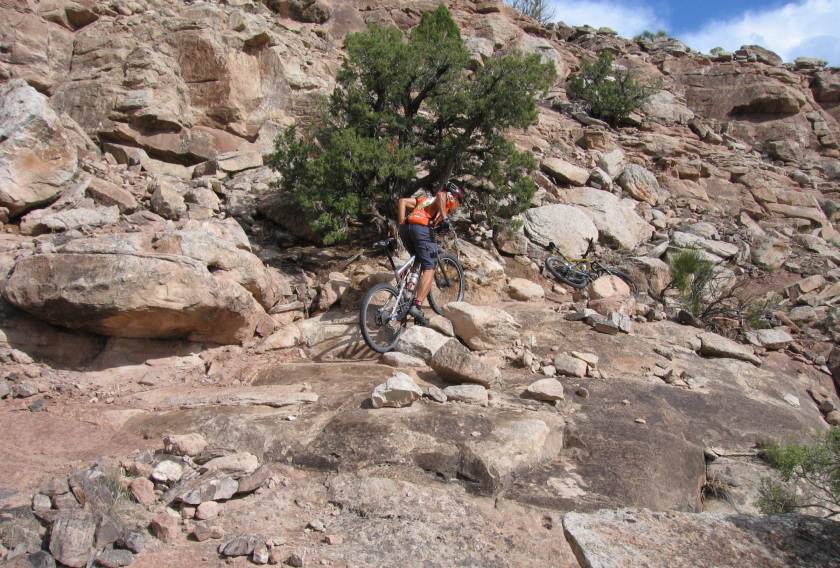 When we get down its not raining! We head off to Over the Edge to hang out for a bit but then the rains hit. That pretty much puts paid to our plans to ride the 18 Road trails in the afternoon.

The next day, October 5th, we try to ride The Flight of Icarus; a high ridgetop ride. Its a bad idea after the rain as we end up having to turn back due to snow on Douglas Pass. We end up hooking up with Sarah and doing Moore Fun backwards – West to East and then Mary’s Loop – which I’ve ridden enough times I swear I could guide a ride on it at the Fruita Fat Tire Fest.

We finish up that riding day .with 17.7km of riding and 421m of ascending – another short day.

This entry was posted in 2005, bike and tagged Fruita, Utah, utah2005. Bookmark the permalink.