Since yesterday turned out to be an abortive attempt at the Wasatch Crest trail via the Mid-Mountain trail today we decided to skip the meandering traverse of the three ski hills and just head to the Crest directly. We headed out from Salt Lake City after a leisurely breakfast and after parking at at the Canyons we’re off on a road-ride to Park City. The route basically repeats the first part of yesterday’s ride but instead of turning off the Mid-Mountain back towards the Canyons we head right for the Crest. Without frequent camera stops the day goes quicker and we cover the same distance to the Mid-Mountain turnoff in half the time.

Here we are after a grinding climb to the lower approaches after the Mid-Mountain to the Crest. Today we are joined by Martin, a good friend from Salt Lake City. 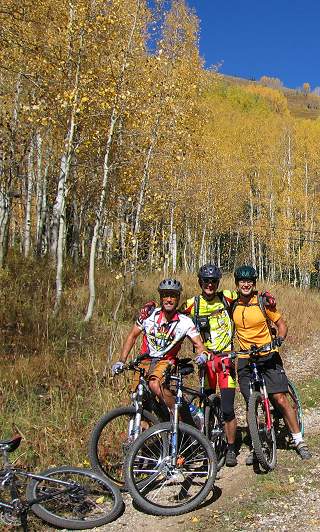 This new approach uses Fthe Mid-Mountain trail to approach the Crest as a loop starting and ending from the Park City area generally. Previously we’ve ridden the Crest as a loop from Big Cottonwood Canyon to Mill Creek – that classic loop is described in the Greg Bromka guidebook – this “new” loop allows you to stay high all the way. It also lets you get this classic reflecting aspens-in-the-lake shot as as we approach the Crest. 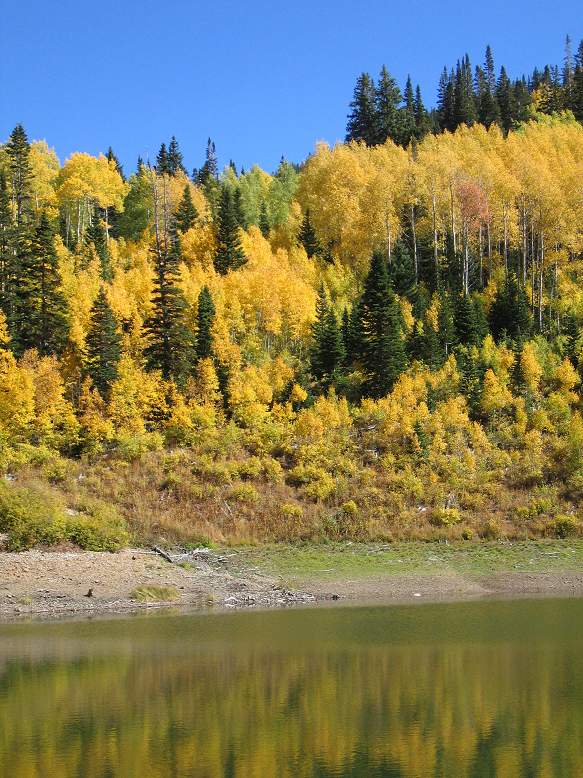 This panoramic is the back-side of the Park City trails. There is quite the contrast between the uniform dry scrub of the valleys and the aspens and oak in full fall glory. It’s a hot day and Sharon plugs away at the climb. Scroll Across!

There then follows an impromptu race between Gary, Brian, Martin and I up the last steep scrambly granny gear section to the start of the Crest proper at about 10,000 feet. Gary blows us all away up the aptly named “Puke Hill”. Martin is beaten by Brian and Gary at the line neck and neck at the last minute and I’m a poor fourth. Sharon and Audrey don’t indulge in such mindless tomfoolery and make their way up to the top in good order. From the start of the trail; we look down Big Cottonwood Canyon to Solitude. Scroll Across!

Always time for a picture with my girl! Just glad to be here again. 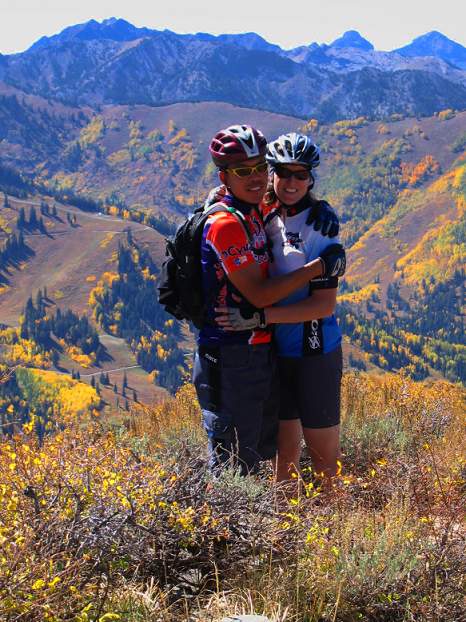 Here’s a panoramic 270 degree looking over the Wasatch looking from south then west to north. Many of these peaks are skied regularly – wish I could name them but I didn’t have a map or my copy of the Chuting Gallery handy. If anyone wants to take a crack at putting some names to them I’d appreciate it.

The view from picture left shows where we came; the start point rest stop just above Puke Hill is below the knoll to the right of the weather station facilities in picture left. Picture right is where we are about half a mile down the trail. We’ve contoured around the bowl in the middle – the middle part of the picture looks towards Solitude

As expected, the Crest is in fantastic shape. Most of the climbing takes place in the approach to the Crest so our ride is now mostly flat with some up and downs. It’s really hard to concentrate on the riding with the colours. 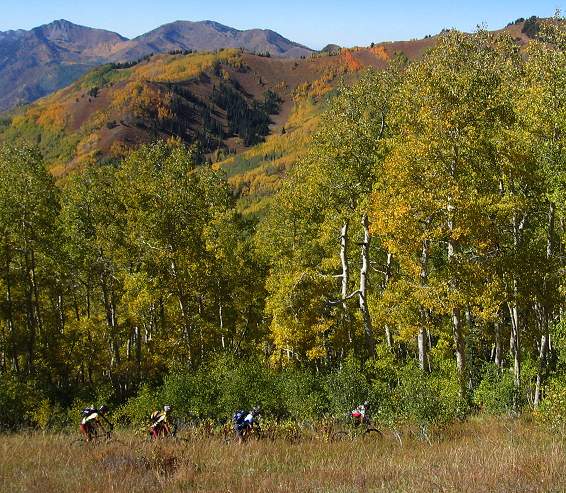 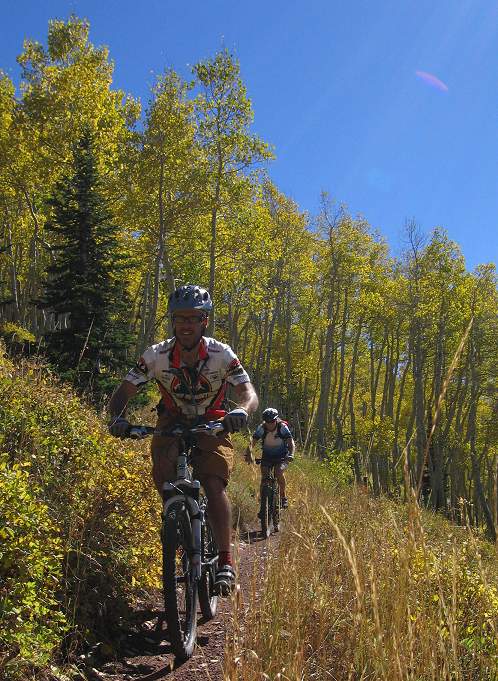 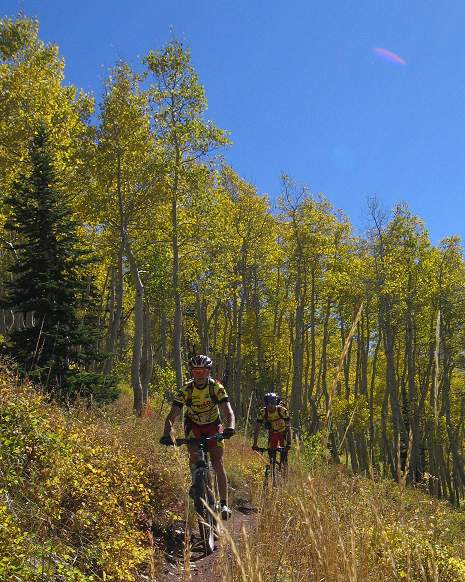 and now the group 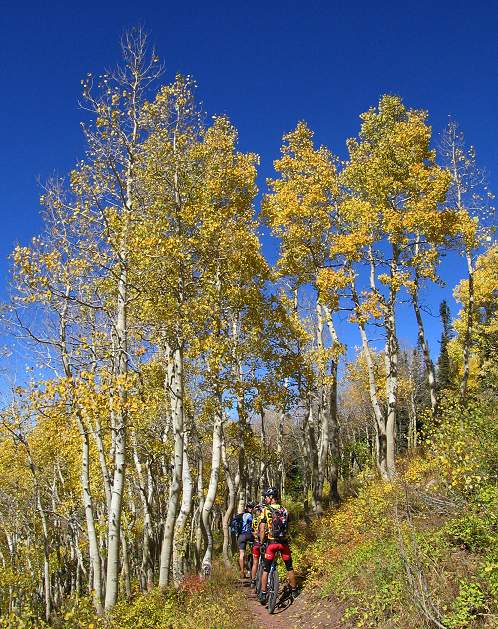 This fin of red rock above Desolation Lake is a nice technical section of trail. It’s rather jarring to read this quote from an on-line guidebook – utahmountainbiking.com –

“The sharp fin of rock above Desolation Lake is a challenge for the very best riders. The ridge is a col, a fin left standing between two glaciers as they ate into the mountain towards each other (there’s a glacial cirque and lake on either side of the fin). Unless you’re one of the elite, plan to walk your bike over this area — or plan for some on-trail repairs and bandaging. Our last ride, we watched quite a few expert riders “try-and-die”as we were repairing our damaged steeds. Not one rider cleaned the ridge.”

The rock is jagged but not that bad really. This rather clumsy stitch is taken on the centre line of the ridge looking away from Desolation Ledge. Of note are the north facing slopes (not in picture) – prime avalanche terrain but oh such sweet skiing possiblities.

Brian takes a turn on the same rock fin. The north facing slopes are on picture left.

It’s now time to haul ass and lose some of this vertical we’ve accumulated. Martin has gone ahead and taken the downhill doubletrack down Mill Creek Canyon as he wants to pack up and leave for Vernal that day. We’re not under the same time restriction so we head for the loop back to Park City. 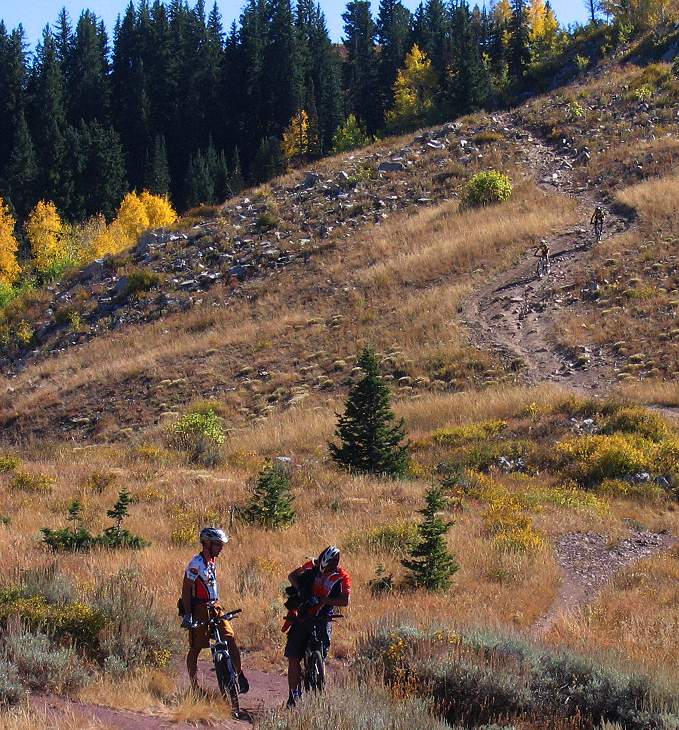 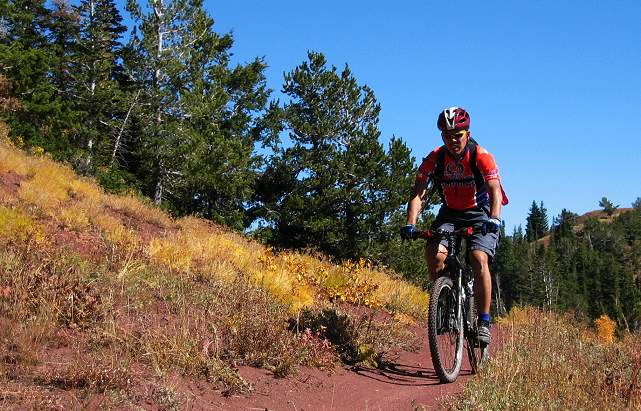 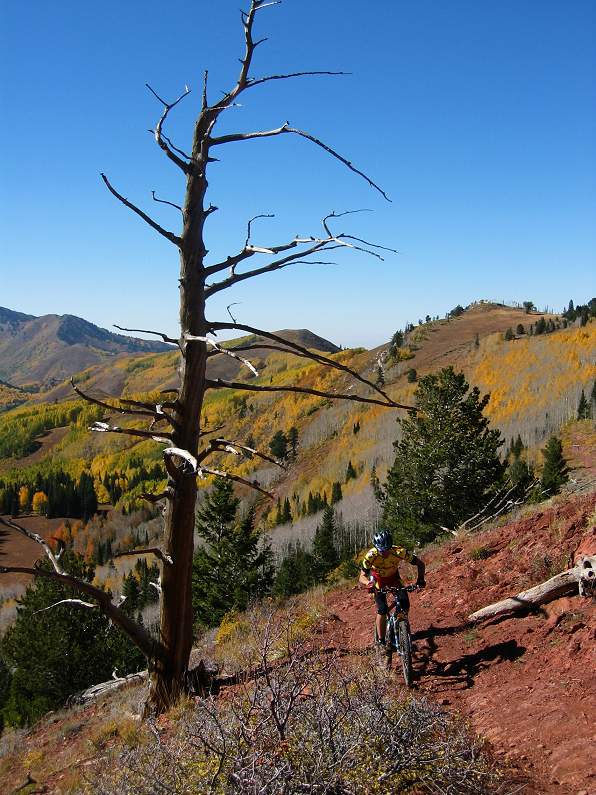 We finish up with 40.3 kms of riding and 1231m of ascending over a longish 5 and a half hour day. No mechanicals in two days of riding – we must be living right!<

This entry was posted in 2005, bike and tagged park city, Utah, utah2005. Bookmark the permalink.