A tale of three North faces – Pattison Trorey and Decker

I went out to Blackcomb’s backcountry on April 17th despite a scary sounding avalanche forecast advisory. Brian was convinced to tag along. Despite the avalanche advisory and the new snow and high winds (60cms in 48 hours/ winds of between 60 – 80 kmh over the past few days) we figured it never hurts to check things out.

Our plan was to tour south to Decker, then take low angle approaches to the lower Decker-Trorey col. If conditions permitted we would head over to Trorey Glacier, then try to bang out some north faces, Tremor, Pattison, Trorey and Decker. It would be a long day. As it turned out, visibility was pretty poor the whole day. The snow was also slow; with 10 – 20 cms of ski penetration making for slogging travel. We nixed the idea of skiing Tremor and settled for three north faces. Our route plan is below; red is on the way in and blue is on the way back. 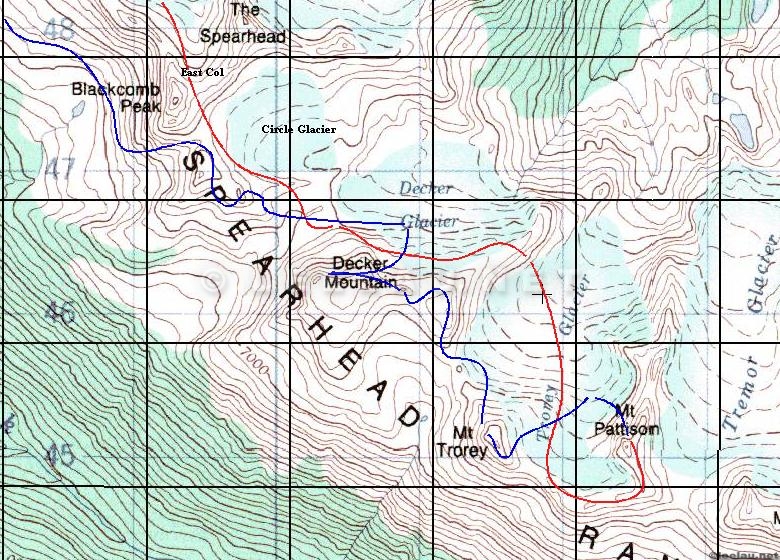 I dug a pit on the N face of Decker close to the lower Decker – Trorey col mainly to look at how the new 60 odd cms of snow was bonding. First 10cms failed on a CTE9. There was a layer of 4F snow at 30cms, about 5 cms deep that “failed” at CTM19. I say “failed” because it wasn’t a clean shear and it barely budged. The 60cms of new was well bonded and had no result.

As we skinned along the Decker glacier, there were no shooting cracks, ski pen was about 10 cms to 20cms. N faces didn’t seem to have a melt/freeze. There was quite a bit of variability due to windloading. Later we got on to some other aspects, and in particular E and SE aspects had a M/F hard layer with 10cms lying on top of the M/F.

This picture taken on a clearer day earlier in the season shows the ground we covered. The blue line generally shows our approach route. The slots were covered and bridged by more then 4m of snow so I didn’t bother roping.

Because stability looked decent, we then made the decision to ski down the lower Decker-Trorey col on to the Trorey Glacier. Snow was in great shape. 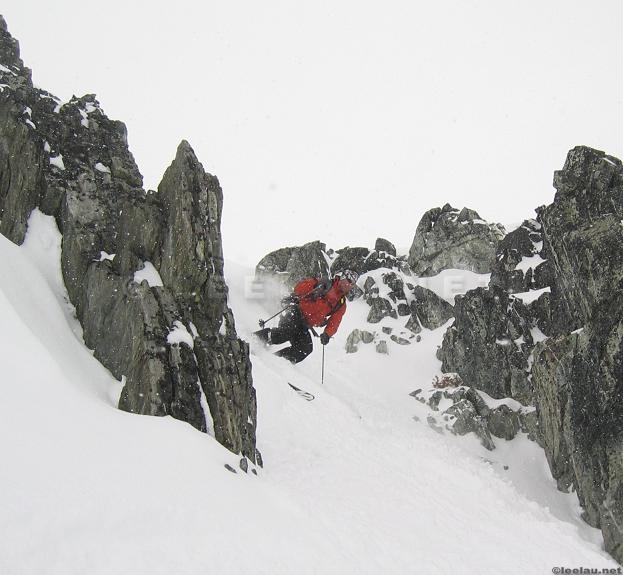 Dropping down to the glacier. 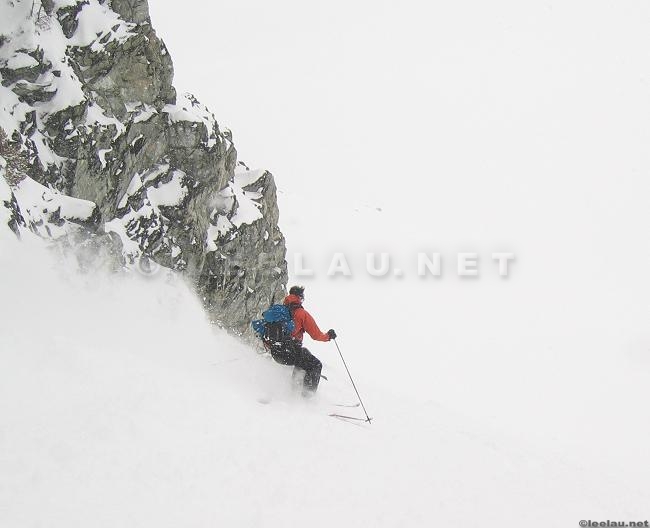 Despite the lighting of this picture, visibility was rather poor and I took opportunities to take bearings. Here’s Brian heading up the Trorey Glacier towards Trorey-Pattison col. This looks down the expanse of the very large Trorey Glacier which drains NE into Wedge Creek. Temperatures remained stable the whole day; around minus 5 or so and winds were light with gusts of between 25 to 30 knots. Trailbreaking wasn’t too bad but the snow was “slow” – not much opportunity for glide on this glacier slog. 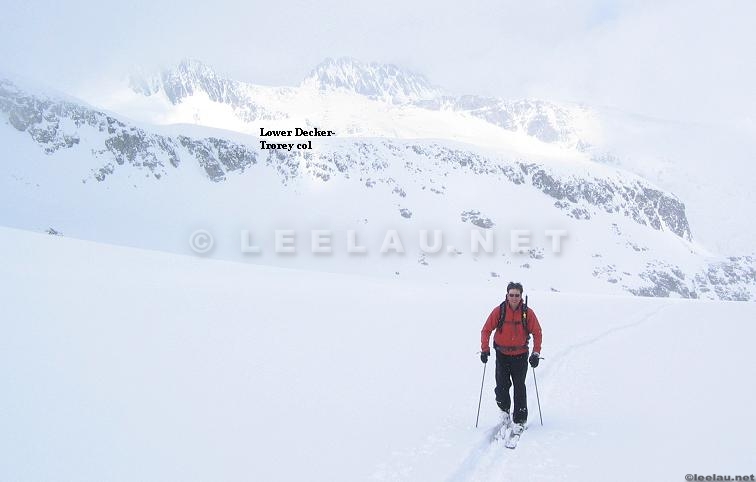 Approaching the Trorey-Pattison col with the weather that’s more typical for the day. Sorry about the steep skin track Brian! 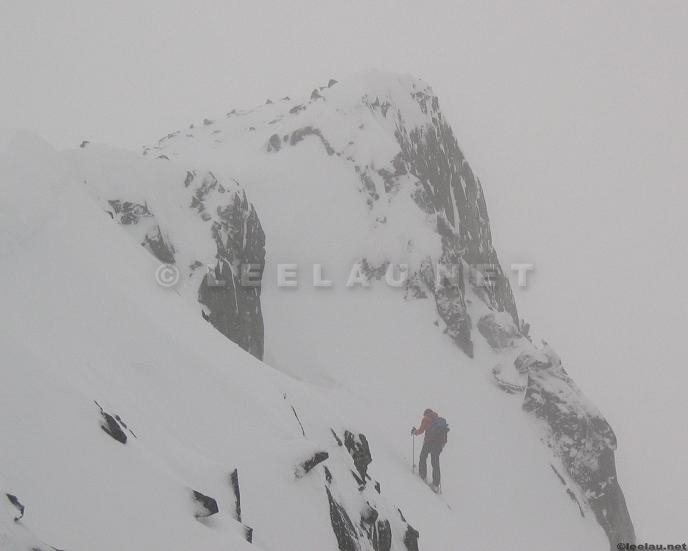 Another party was ahead of us on Pattison and we waited for a while for a window of visibility to ski it. We waited, waited and waited for what seemed like forever. Meanwhile the sun kept taunting us with half a minute of fleeting light quickly replaced by more interminable grey. Finally after 40 minutes we got our window. The lead guy dropped in, did a big ski cut with no results so we all took turns. 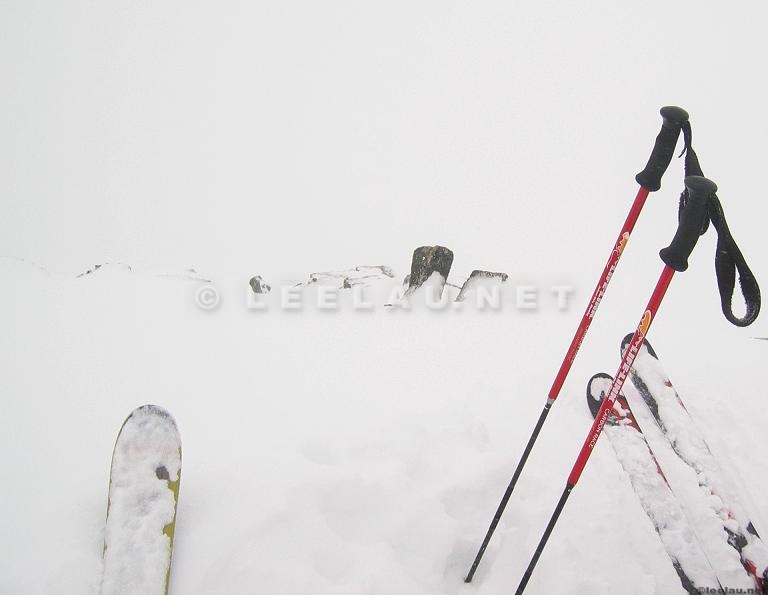 Beautiful waist deep snow all the way down. There were 3 other skiers in the other group. One of them was kind enough to test the face by headplanting. The other one made her way down cautiously. Brian and I shredded the skiers left gnar. 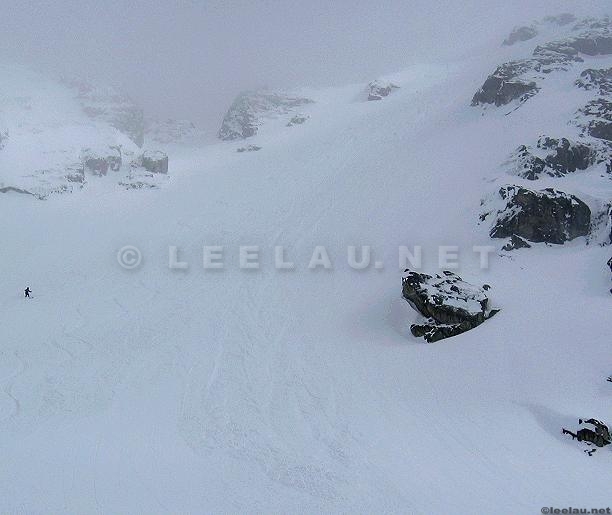 Our next peak to bag is Trorey. I have no pictures of it since all you’d really see are rocks and gray and white. This is what Trorey looks like from an earlier trip. I skinned up the east face and then bootpacked the summit ridge. 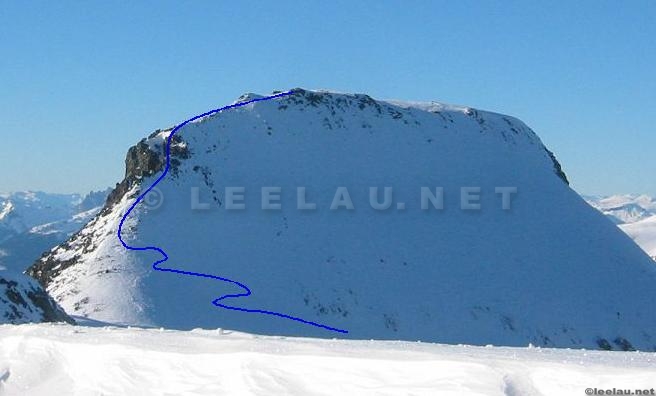 The other party followed behind us on my steep crappy skin track with the 10cms constantly sluffing (sorry again Brian) then skied off to the ridge over to Decker. We skied the N face of Trorey again waiting for a window of visibility that never seemed to come. Snow was great – no reaction to a big sloppy ski cut. 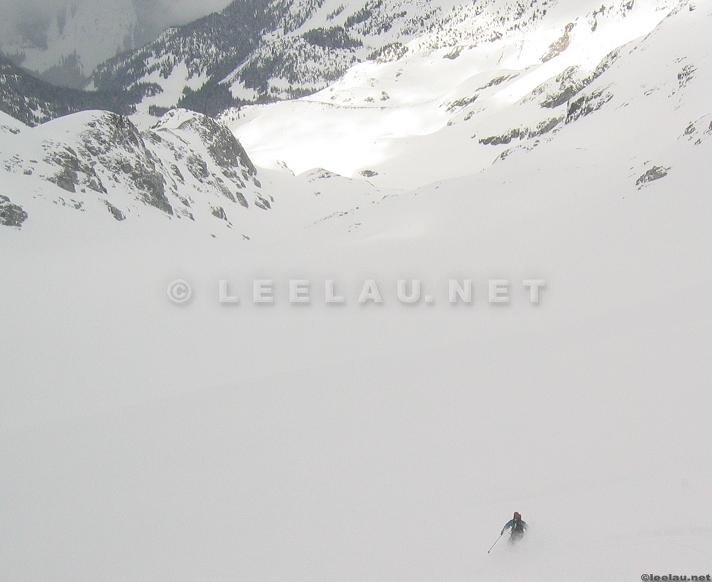 We didn’t ski down the whole face to the bench of the glacier since we still had to bag Decker and ski another north face. Instead we traversed over to the upper Decker-Trorey col. Having skied the entire N face without any problem Brian decides to show his ski-ballet skills on a snow-snake. 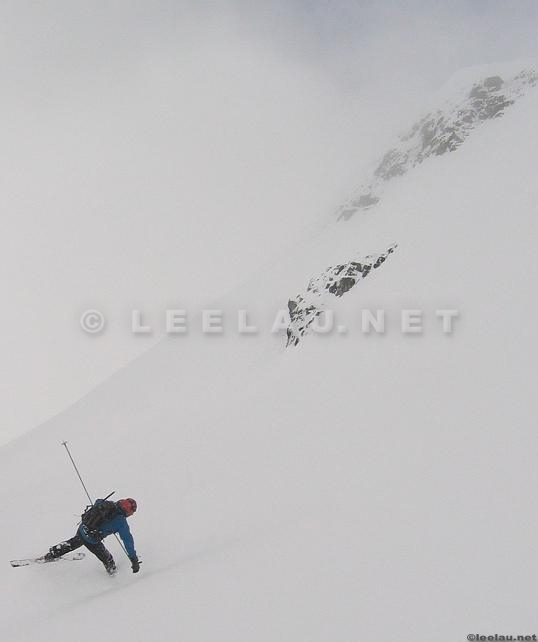 Instead of doing the rational thing and bootpacking up a snow slope to the upper col, I wasted some time busting through a small cornice on to the ridge over to Decker. Then it really socks in and I have to break out map compass and GPS for whiteout navigation to Decker Peak.

At this point we’re eating up big chunks of time navigating the summit ridge cornices trying to find a way down and through. A window of visibility shows us that we’re on top of the Finger Chutes. The window is so short that there’s no safety margin to get down the chutes. More wandering around again trying to find the frigging entrance to 9th Hole… grrrr.

Problem is that all the landmarks I was using earlier in the year are now buried under even more snow. NOTE TO SELF – next time take a waypoint or take a bearing from the peak! I hauled out the probe to check cornices but all I found was that we were on to of a huge airy bench. After using and wasting more time waiting for visibility, and not feeling that lucky we took the mellower option of the N face down Decker Glacier. Wouldn’t you know it, as soon as we got down, the clouds cleared …. arghhh.

Some people had come down 9th Hole and the ridge off the windlip near the rock which splits the Decker Glacier and 9th Hole. On 9th Hole, there was surface sluff on the lookers left/skiers right of the face at the convexity on the slope where it “Y’s; looked like a ski cut. On lookers right/skiers left a group of 2 had come down the face. One of them left a sizeable crater; no reaction.

The ridge off the windlip is steeper then 9th Hole (45 degrees??), two skiers came down that. No reaction again.

It was late, we had a long enough day. We booked of the Decker Glacier, went around Circle Lake on the ridges to the south, headed over to BodyBag Bowl and rejoined the resort where we found groomers to cap off an interesting day.

Lots of snow, lack of visibility, and lots of waiting for windows of visibility made for relatively slow travel. We started at 9.45 and were out at 8.30. . 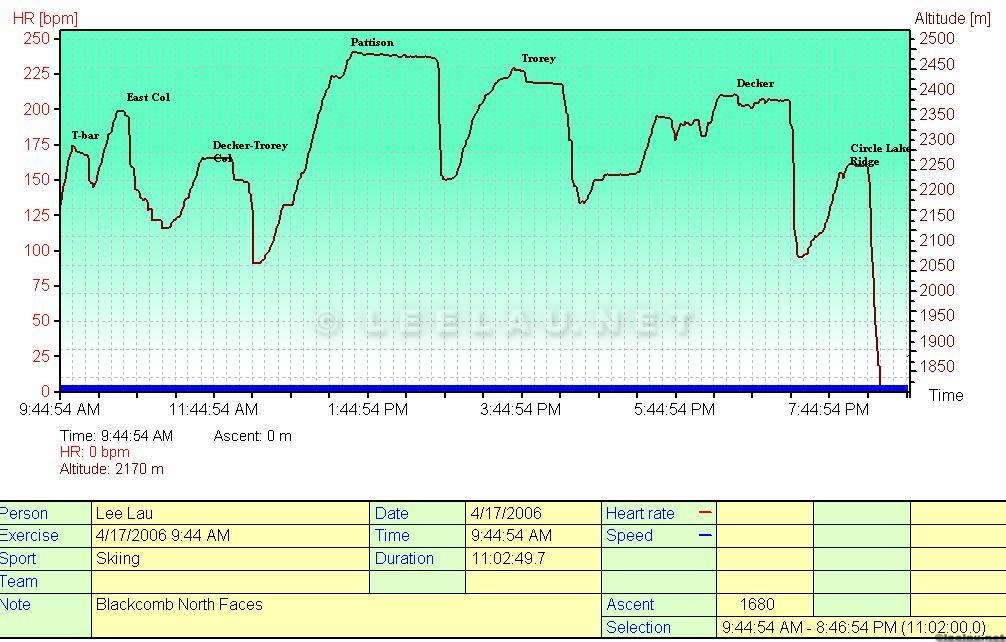 This entry was posted in 2006, ski and tagged blackcomb backcountry, Decker. Bookmark the permalink.