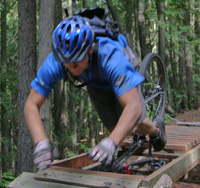 Every year, we try to do a trip to B.C.’s interior to check out new areas and explore new towns. Living in Vancouver it is only too easy to get caught up in the hype of the Shore and Whistler – there is a lot of quality riding in BC and Alberta and we don’t particularly want to regret not checking out as much of it as possible. Salmon Arm in the Interior of BC is best known for house boats, riotous parties on said houseboats and copious beer drinking. Who would have thought it would also have some great riding to go along with the copious beer drinking! We met Adrian Bostock for beer on Friday night and he agreed to put off his trip to the Chilcotins to show us some Salmon Arm goods. With a local tour guide to show us around and the help of an awesome local bike shop in Skookum Cycles and some excellent maps, we figured we’d have a good time.

Our first ride took us to the Rubberhead trail network. See the above links for more information and a map for location – a better map can be obtained from Skookum. The trail can be accessed by shuttling or you can choose to ride up. Some trails actually start at over 1200m giving you a nice long descent to Shuswap Lake at about 200m. You can park along Hwy 1, at a pullout 14.3 km east of the Dairy Queen in Salmon Arm or just 2.3km east of the Canoe Mill. Then take FSR 110 about half way up a 2WD accessible logging road. We chose to drive up to the 5km mark then climb the rest of the way to the Upper Rubberhead trail head as a nice warm up. The road climb is a nice easy grade – comparable to the Fromme climb. It’s a middle ring on a light bike or granny gear on a shuttle pig. We repeated a previous road trip to the Rockies with the Surrey boyz by, once again, inviting along Tyler Wilkes and Nigel Whitehead. We’ve known them ever since they were 16 year olds putting in hockey stick a-frame ramps on to North Shore trails. Well they’ve come a long way since then, now fine upstanding UNBC students. However, being impoverished students they still lack a quiver of bikes so Lee lent his XC bikes to them for this trip. Adrian is wondering what kind of mousse Nigel uses to get such stylish locks.

Dropping into steep sandy soil on Upper Rubberhead, the boys have to get used to the steep head angle right away. I think the boys developed a bit more respect for Old Schoolers after this trip! Tyler dropping in, not used to be so close to his front tire!

We ended up doing a couple of laps on the Rubberhead trail system, starting with Upper Rubberhead – Meatgrinder and ending with Warren’s Trail (named after local Warren Ellis). The Rubberhead stays technical throughout the entire length. There isn’t much cedar around so what stunts and bridging there is tends to be made out of pine and not the cedar variety we often see in the Coast so I expect the woodwork would be dicey in the wet. Sharon Bader on a Canoe over some forest debris Tyler Wilkes on a A long ladder on Upper Rubberhead.. Nigel wonders how much travel will he REALLY need to get off this thing! Expect trail construction and woodwork to be topnotch. There are some older decrepit sections but they’re pretty easy to see and avoid. We were here on a weekend and there was no-one around. There simply aren’t a lot of people riding in Salmon Arm. It isn’t a destination mountain-biking spot. Road warriors from Calgary or places farther east making the North Shore/Whistler pilgrimage don’t stop — yet they should. The local bike shops actually told me that they would not mind seeing more traffic on these trails; judging from what I saw, these trails are so well built they can take a good deal more traffic. 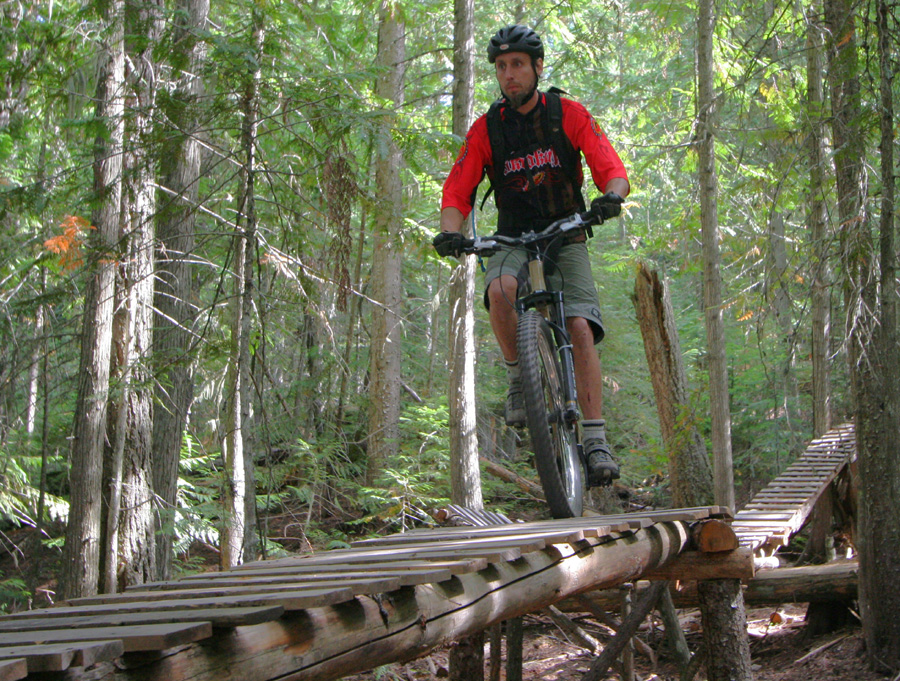 Adrian, the local, showing us how its done After Upper Rubberhead, you drop into Meat Grinder. All these trails have structures but all the structures have ride – arounds. Sharon on a Meat Grinder A-frame

A technical trail feature on Meat Grinder led to some amusement – the SLOT MACHINE. A weight keeps it to the picture right start. When you ride onto it you have brake hard. This pushes the ramp to the left where you ride off. The trick is to brake and stop at the right moment.

Adrian shows us how its done!

Nigel sucessfully rode this structure! But those pictures are boring.

Go STRAIGHT at the end!

Tyler was the champ today! Somehow he ended up not meeting serious injury on the first day of riding. Yes he did walk away!

We continue on with the loamy goodness of Salmon Arm down Warren’s Trail – with some beautiful bench-cut singletrack built to exceedingly high standards. Nigel – Check out that travel ! We end our first lap on a side hill beside Hwy 1. It is quite the contrast between the hubbub of the highway and the green leafy quiet of singletrack and trails

From here we retrieved the car and opted for another lap in threatening skies. For lap 2, we rode west on Highway 1 then up a nice climb from the Canoe Mill back to the start of lower Warren’s Trail then dropped back down again.. Lee Lau at the trail head!

After dropping back down through the cut block on Warren’s Trail for a bit we’re back in trees and wonderful purpose-built cut trails. 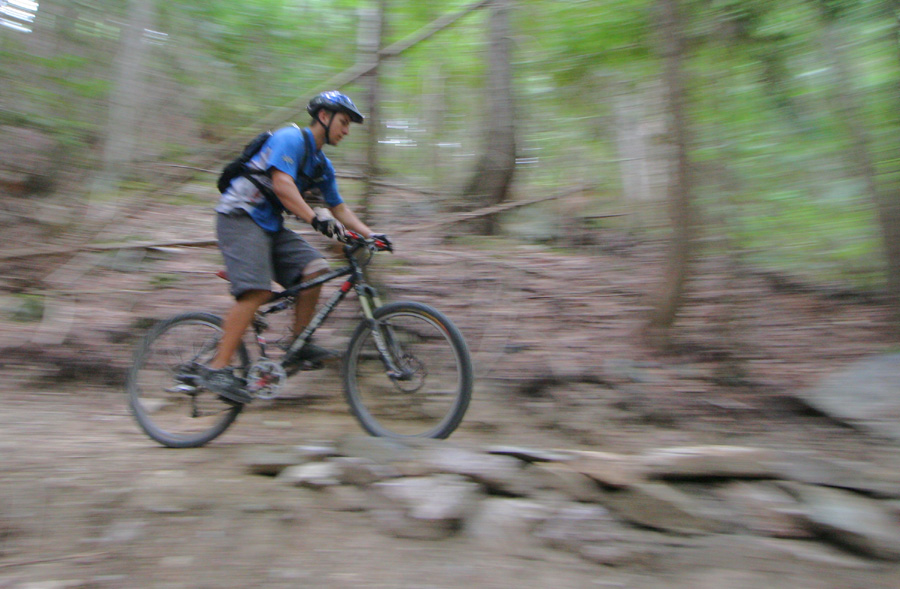 Through this fast bermy section you can sort of see the trail construction. 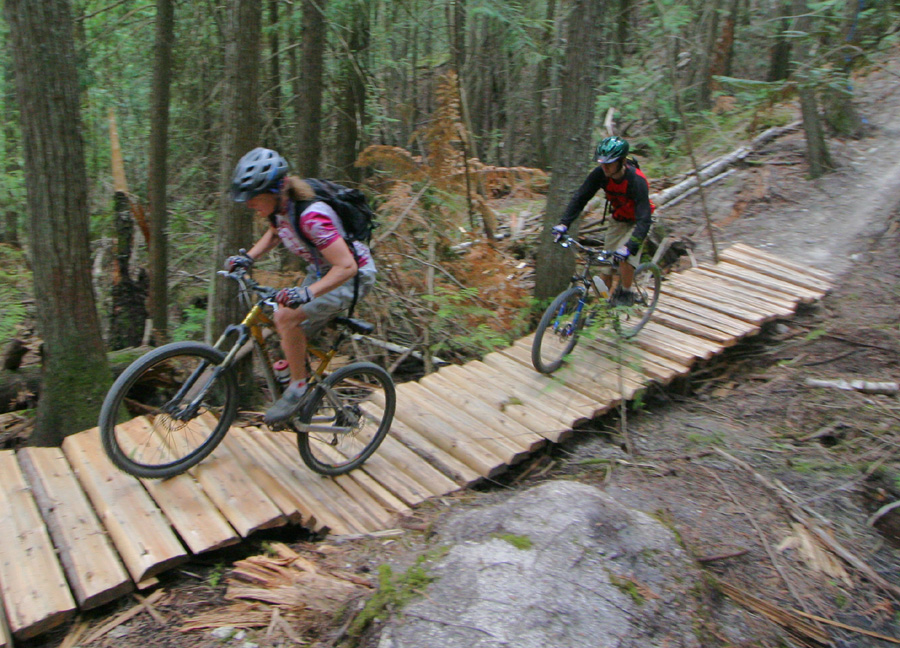 We had to find a place to camp that night. It was suggested to head to the Larch Ski Hill cross-country ski area where we could possibly stay in the cabin. It turns out that a lot of yahoo’s come up here (we experienced a few at 3:00am on their ATV’s) and last year they vandalized this cabin. The society which maintains the XC ski trails and the cabin now have a caretaker who was nice enough to let us sleep in the loft of this cabin.

This was great since it rained through part of the night and the next morning They are currently assessing summer use so it may be a place to base-camp in the future while exploring Salmon Arm singletrack. The next day we rode in the South Canoe area where Skookum Cycles holds their Salty Dog 6 hour Enduro. The trails in this area are purportedly more cross-country then the free-ride shuttle trails of the Rubberhead. We quickly found out that Salmon Arm cross-country is fast, flowy and buff. Again, it was the weekend in one of the more popular trails and yet there was hardly anyone around. Pushing up one of the slick uphills

We climbed to the top to ride the Katie Colin Memorial Trail. It had received a light bit of drizzle and turned out to be fast, rooty and pretty darn steep for a “cross-country” trail. In fact we liked the top section of the South Canoe trail system so much we rode back up to ride You May Be Right and finished off with speed runs down Paranoia, Prudential and Malibu. We don’t have fast singletrack buffness like this in Vancouver with nary a soul around. It’s pretty amazing to be able to ride like gems like this with such good conditions. Memorial to Katie and Colin at the trail head