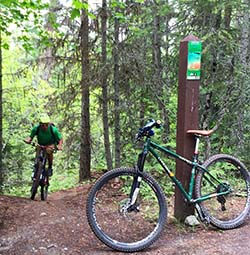 Kalamalka Lake Provincial Park is located at the North end of Kalamalka Lake in the District of Coldstream just south of Vernon. From the park you can access the mountain bike trails higher on the plateau that are maintained by the North Okanagan Cycling Society (NOCS). This is one of the few Provincial parks where Mountain biking is allowed. Yeah for Parks access! If you ride here we encourage you to donate to NOCS so they can continue with their fantastically effective advocacy in the area.

We rode here last year and started the ride from the parking lot closer to Vernon on Cosens Bay Rd at the Cosens Bay/Hydro Gate. This time we parked near the trailhead on Kidston road, past what BC Parks calls the Red Gate. You can also park in the Provincial Park lot if the trailside lots are full. We opted to park here and felt this access got you to the climbing trail quicker without as much riding on the lower trails (which can be confusing and hotter in the summer). For a map of the Provincial park check out Here.

This was a big ride.  You could make it bigger by adding some loops in the mid mountain, or shorter by doing the Pali Gap climb as a descent and finishing with one of the lower trails. 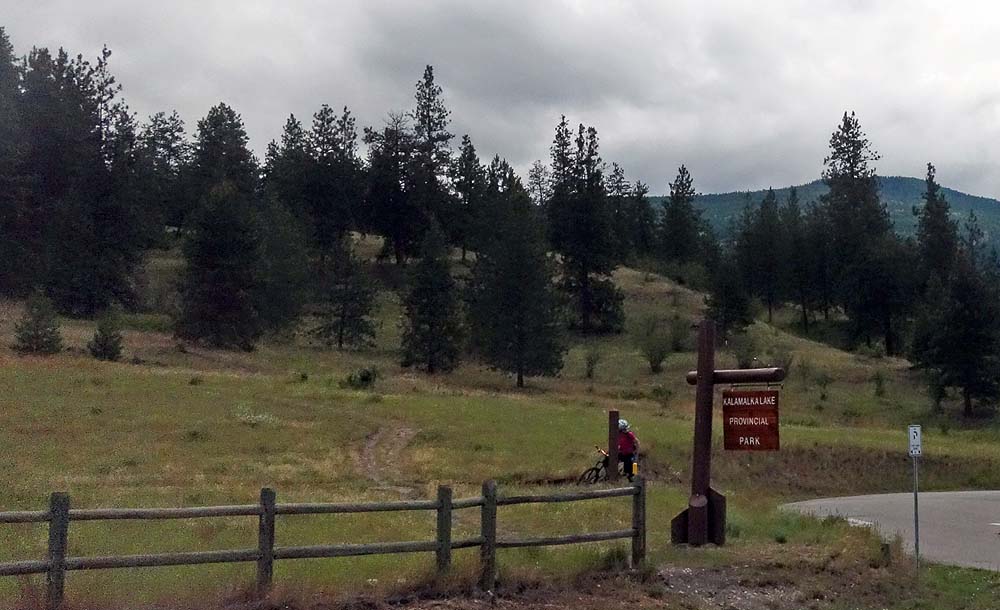 Access near the Red Gate, just before the Provincial Park gates that close at dusk. See BC Parks Map, this access is at the end of Kidson trail off Kidston Rd. 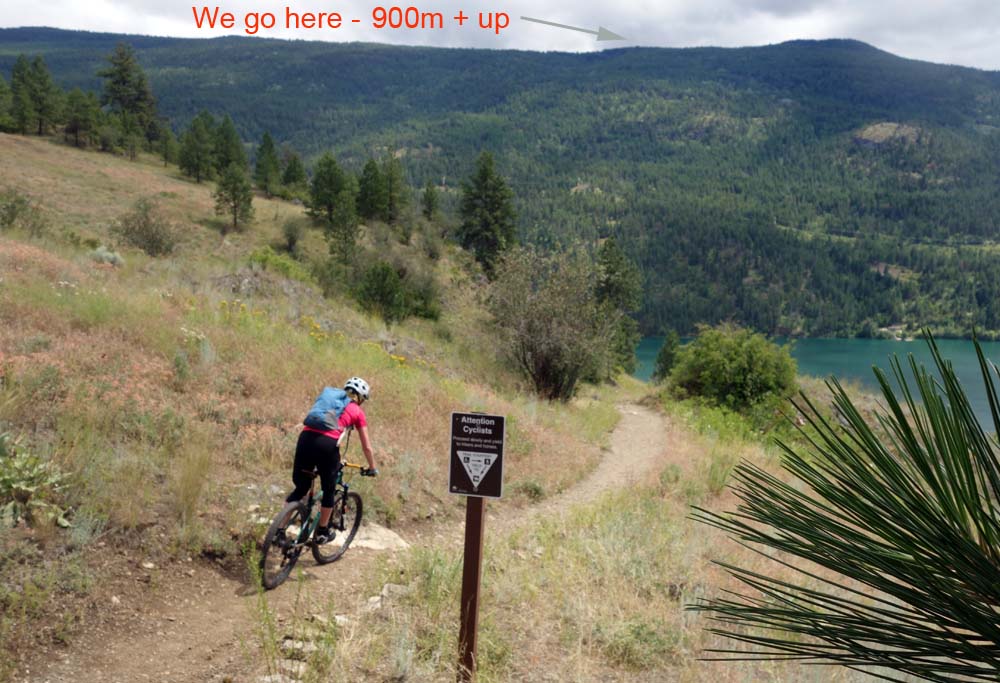 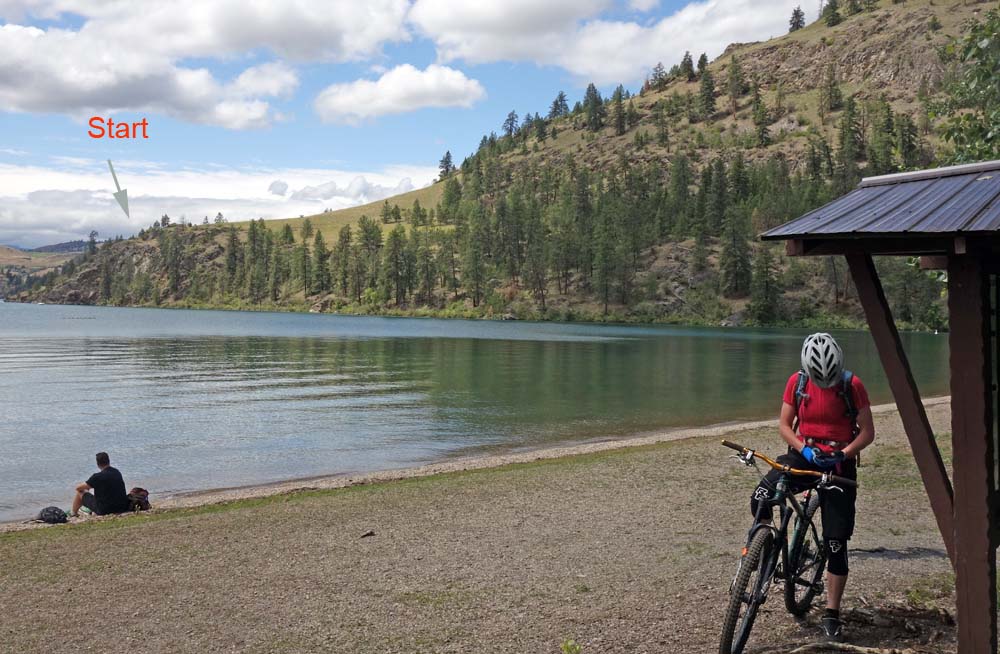 Just past this beach the Cosens Bay Express goes off to the right. Its a faint mountain bike trail that is not on the BC Parks map, but is on the Trailforks Map. This is a quick way to Cosens Bay rd 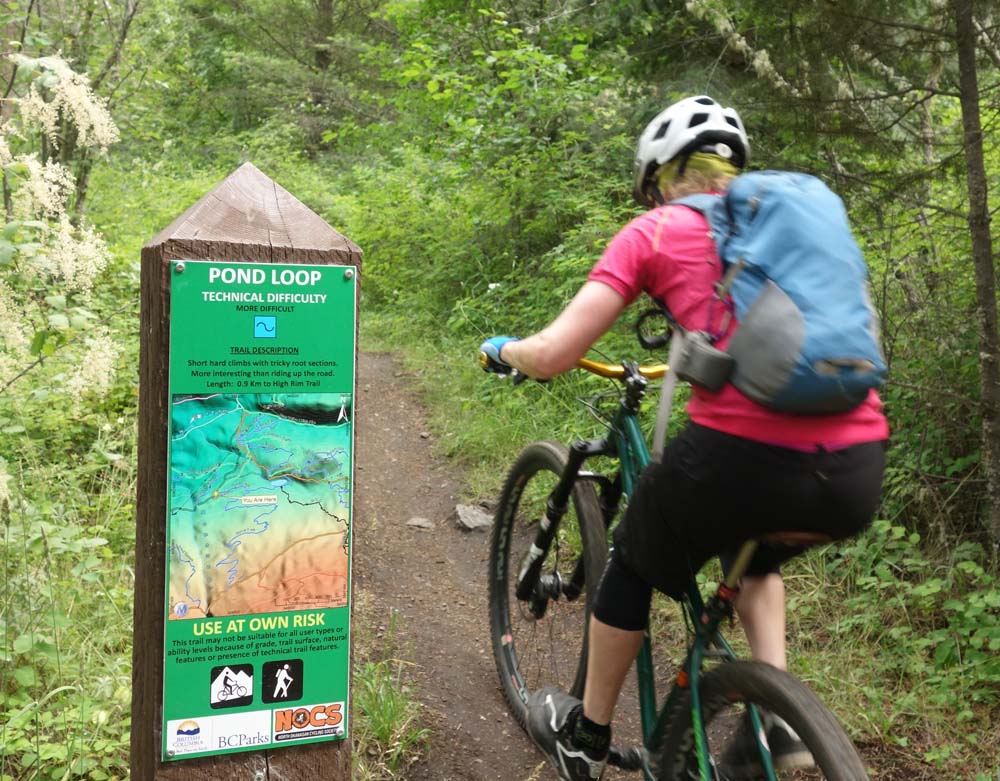 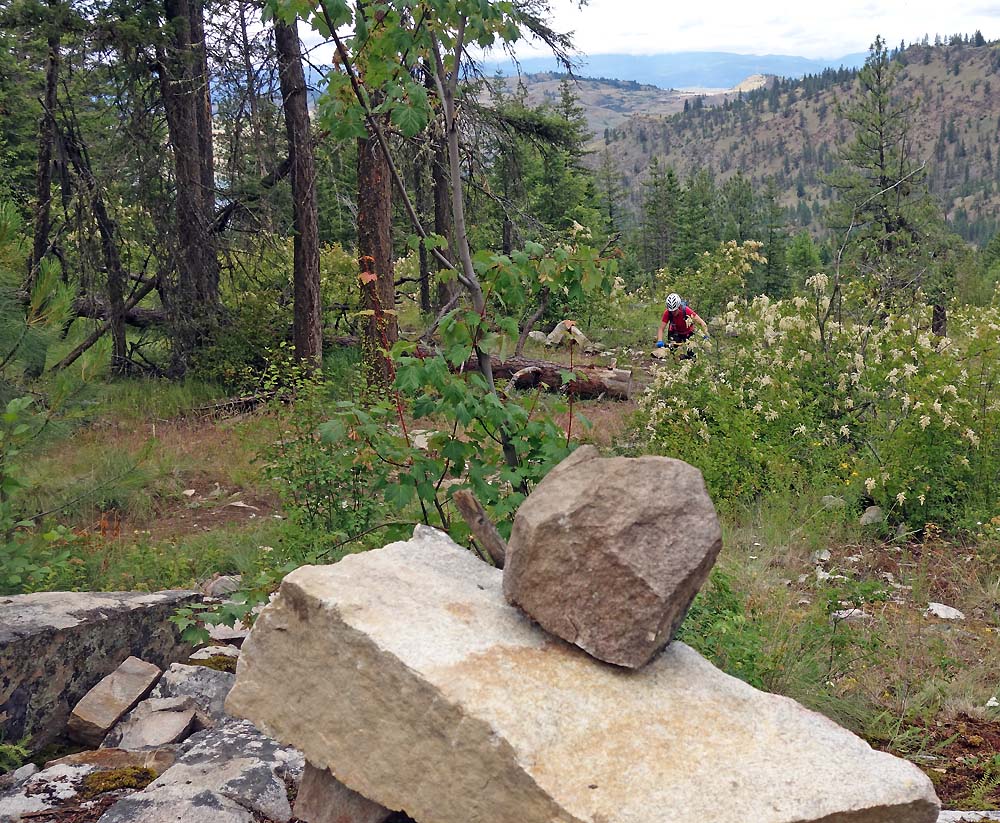 The second section of the climb is Stoned Again.   About two thirds of the way up the new climbing trail Pali Gap heads off to the left. Work on Pali Gap commenced in the Fall of 2015 and paid for by NOCS for a machine to rough in the trail. Volunteers will be working on the trail to finish it up as part of this network for a climb and descent. 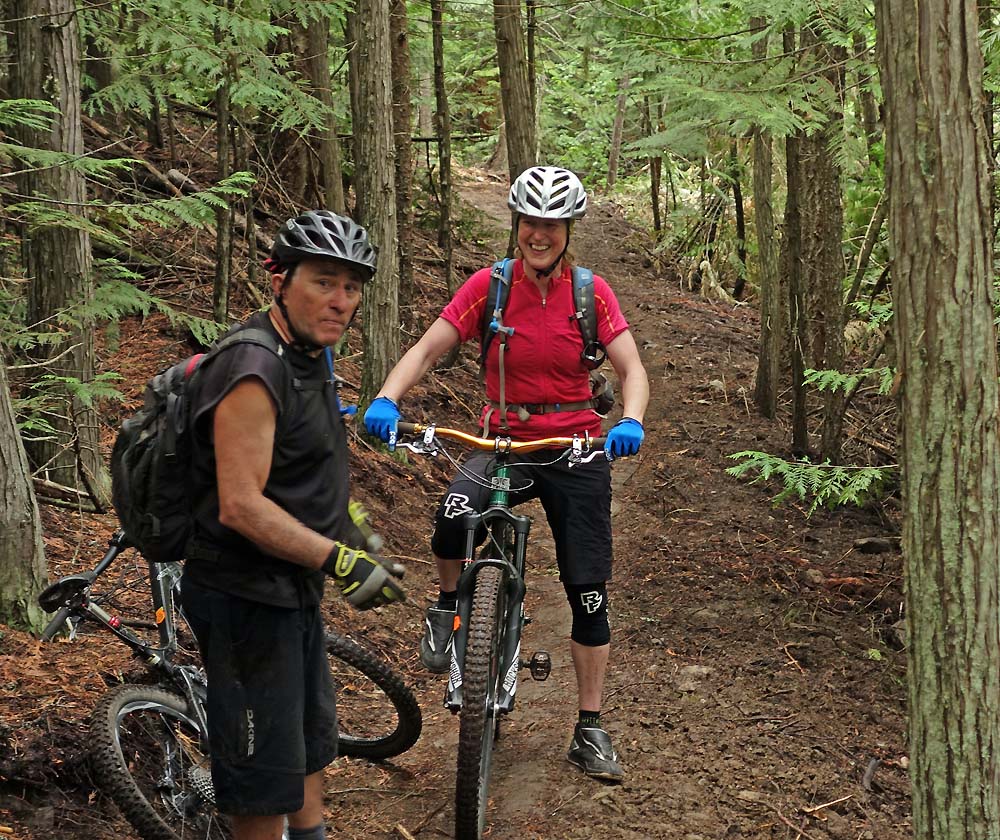 Ernie Bru one of the builders of Pali Gap and other trails in Kalamalka Park, despite the fact that he works at Okanagan Springs he would appreciate some beer left by his tool stash! 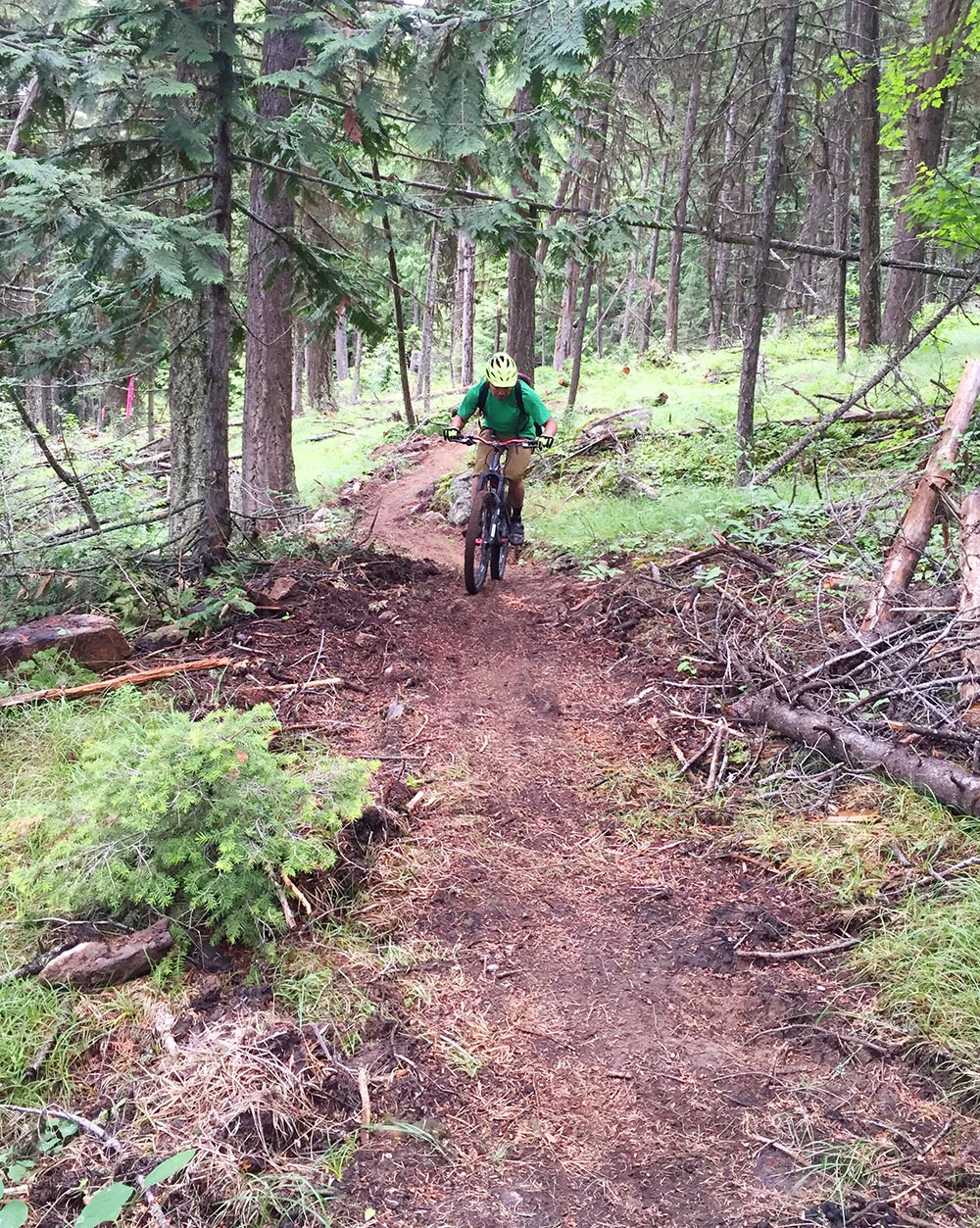 The switchbacks on Pali Gap 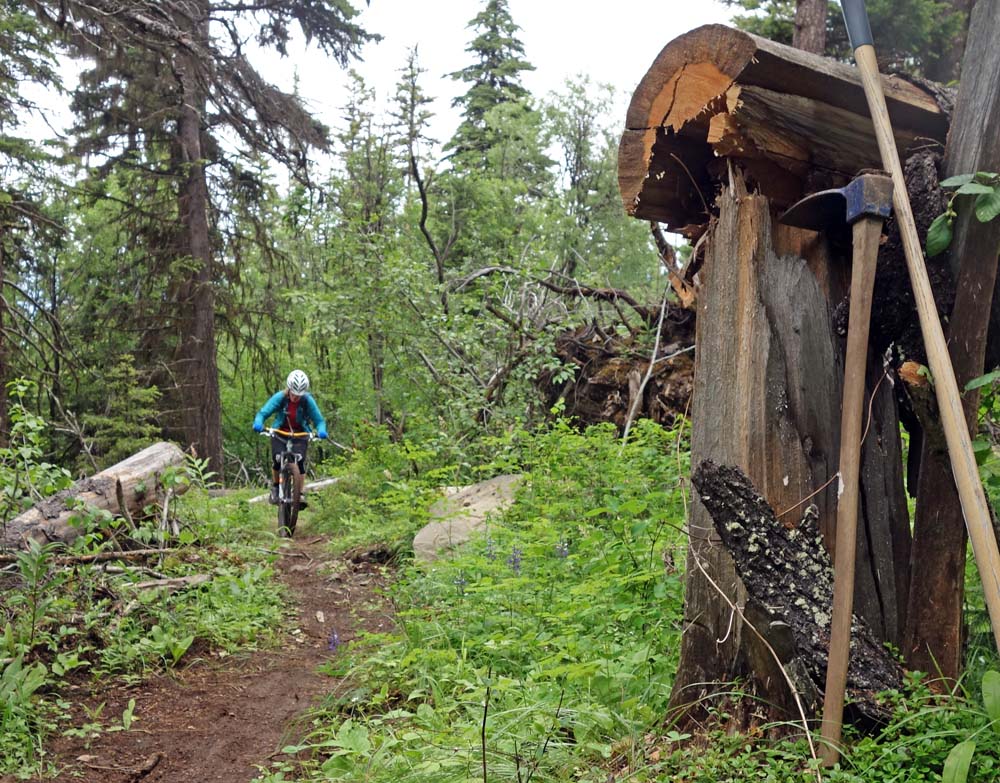 Getting to the top

Nice bench and view off Tombstone at the top of the climb at 1340m. 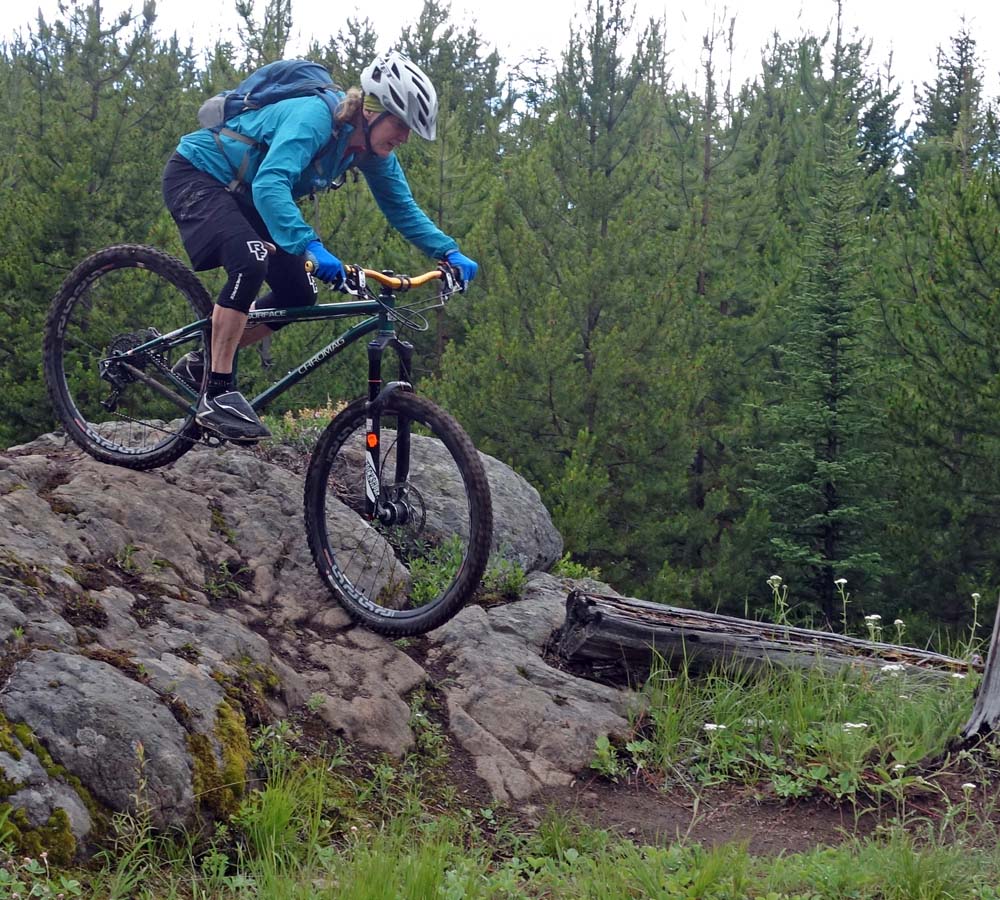 Tombstone is a fast flowy descending traverse to Big Ed. 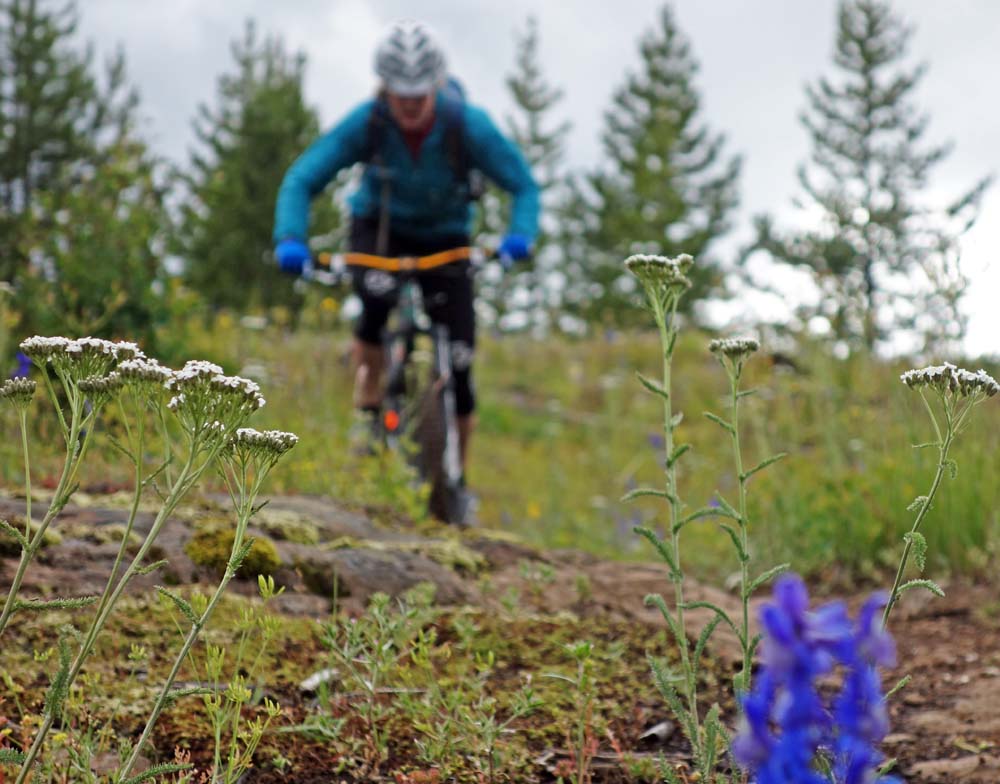 Flowers were going off! 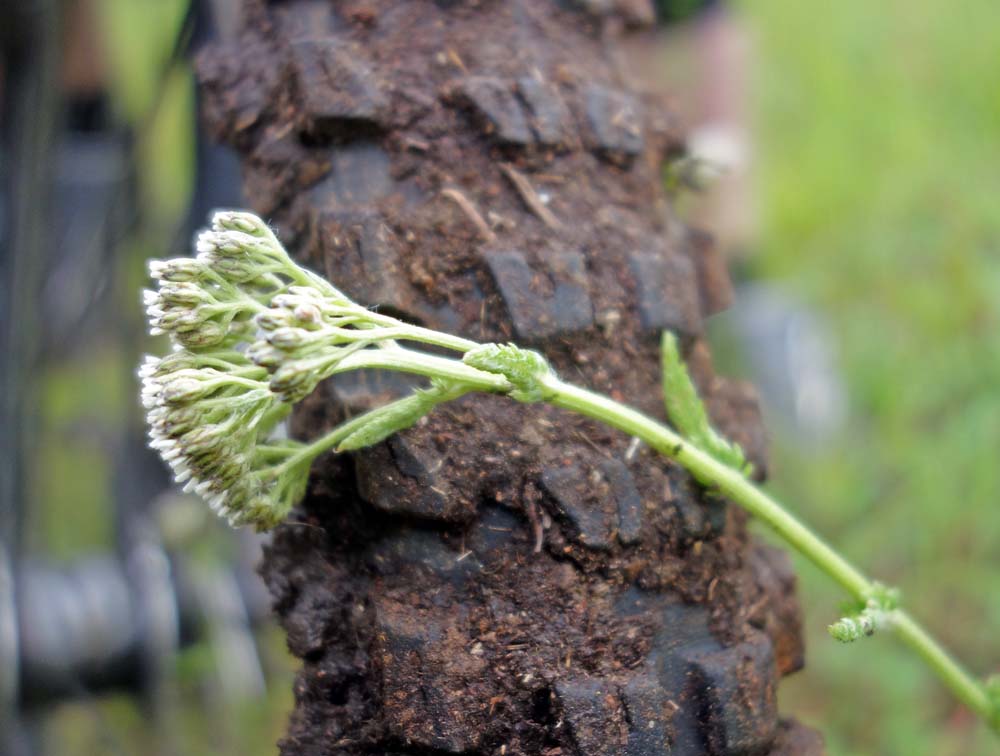 Not much traffic on these trails! 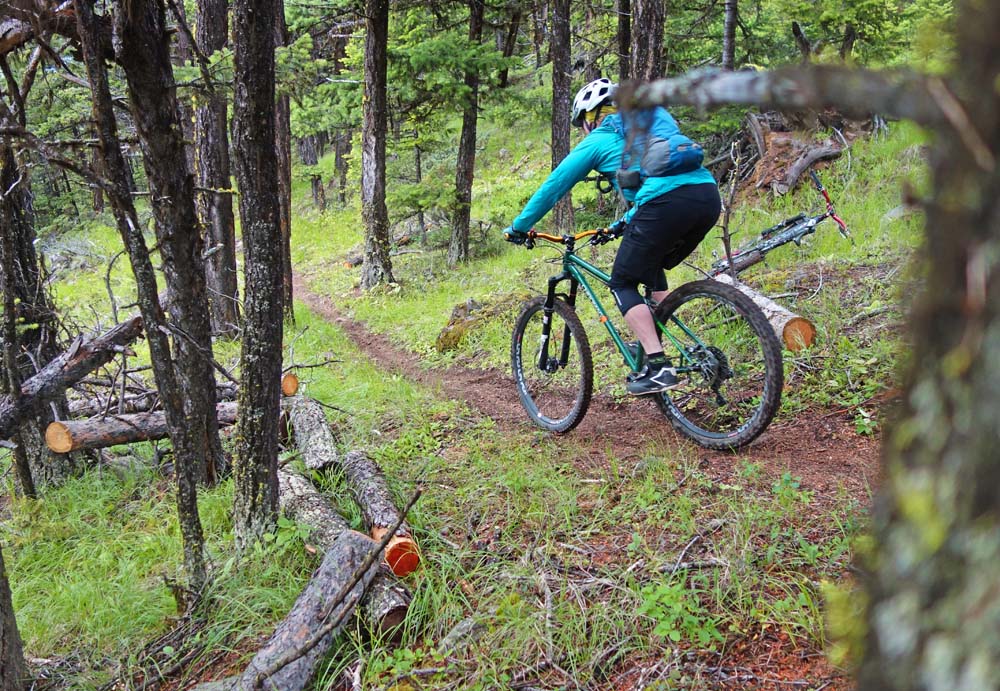 Chromag Surface is a perfect bike for Kal Park. Jumps on Big Ed. It had just rained so wood was wet.  We passed… Para Launch off Big Ed. Not for bikes. 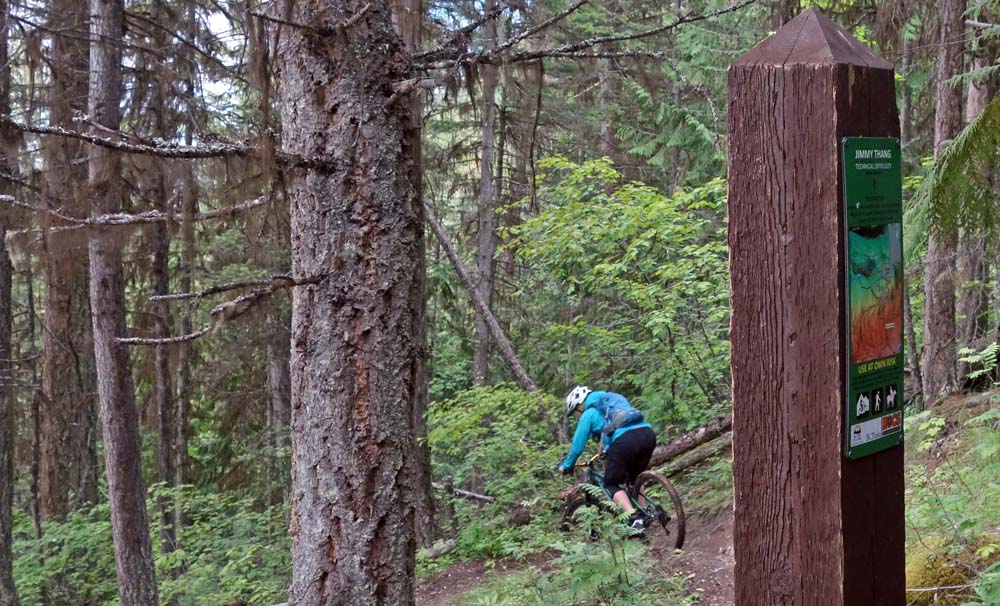 After Big Ed we rode down Jimmy Thang and Purple Haze, then climbed back up the High Rim Trail ( HRT ) to Twisted Sisters.  There is a ton of singletrack descending on this loop! 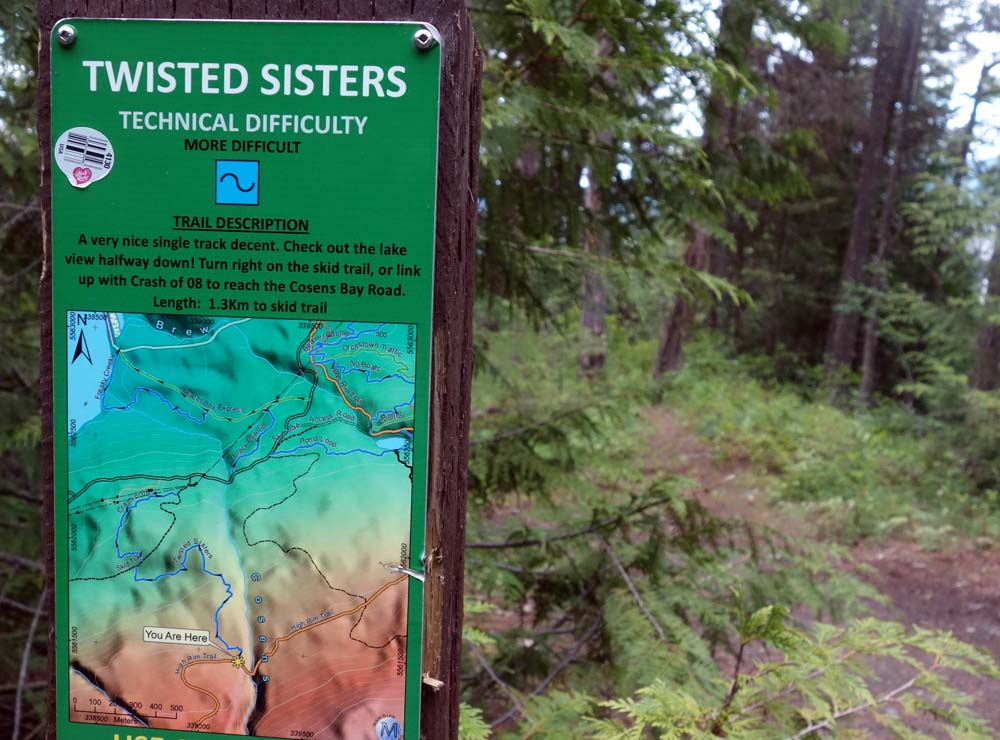 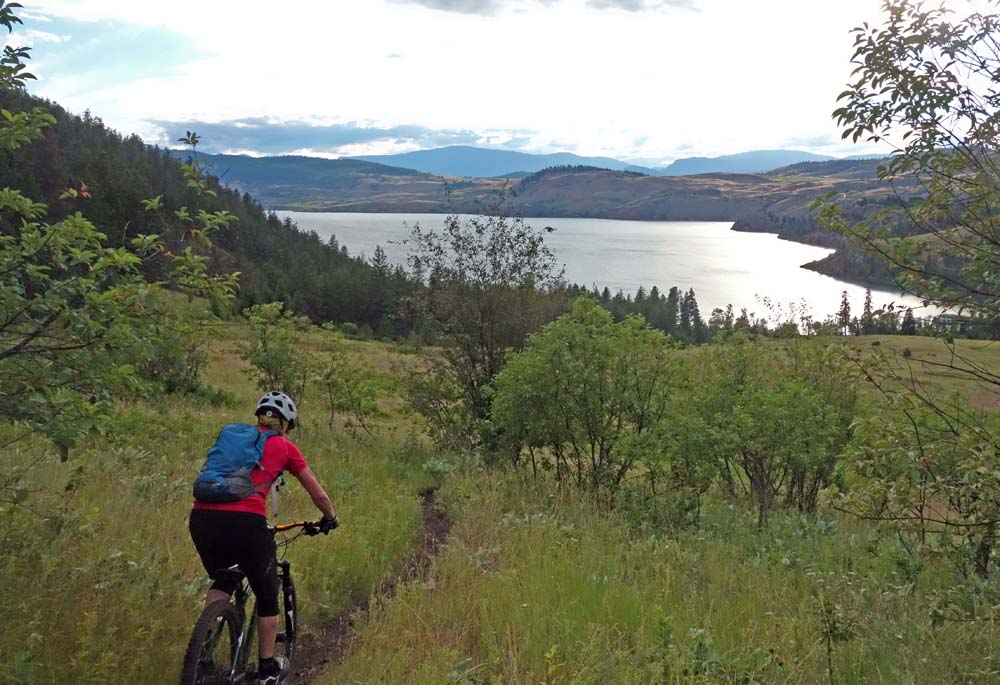 Then we headed back the way we came towards Kalamalka Lake. 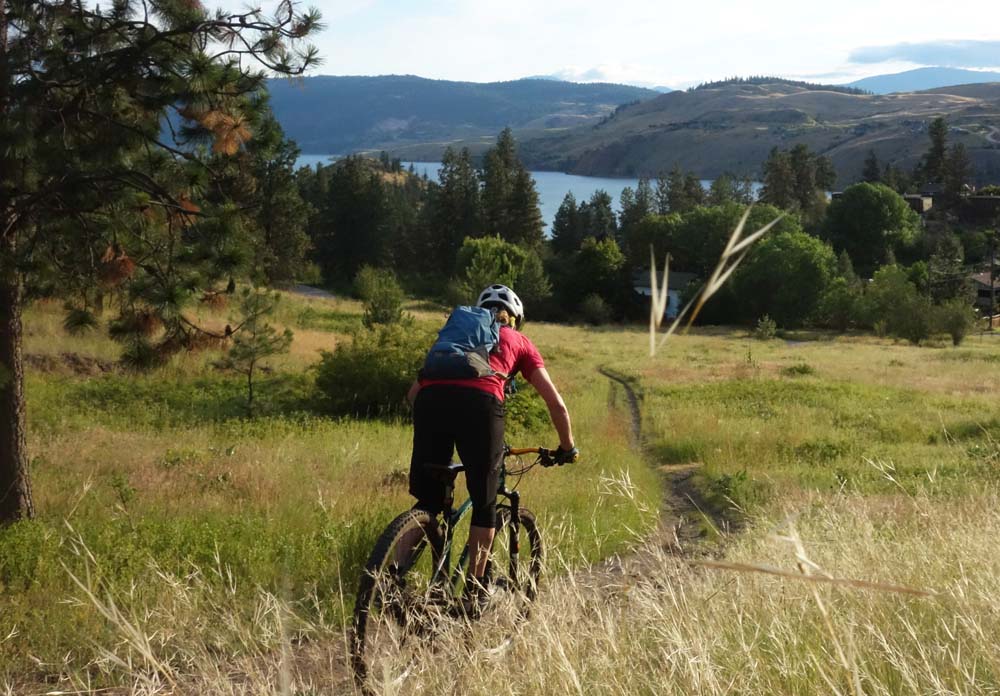 Golden light dropping back to the car. 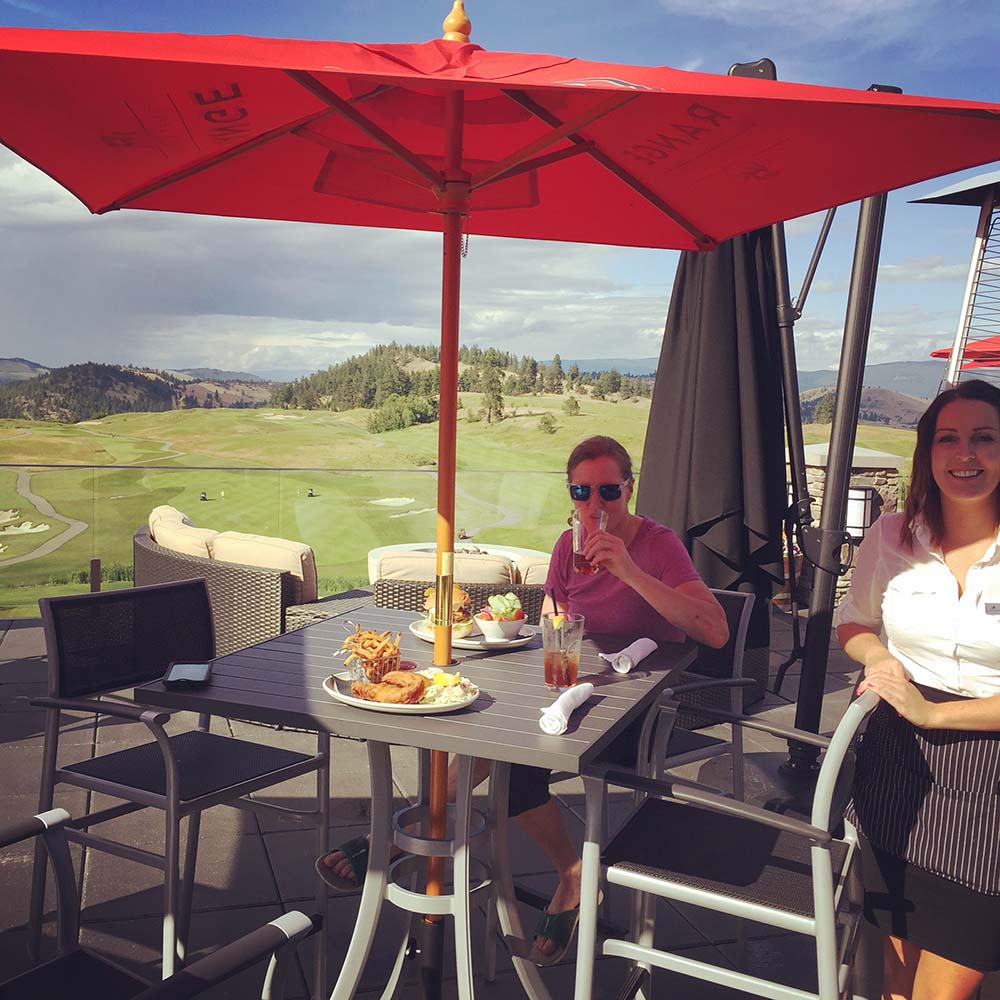 A nice end to this ride would be a beer and burger at the Predator Ridge Patio, where we did partake the next day.

One Response to Kalamalka Lake Epic