Inspired by spring skiing exploits from other parts of the world and reluctant to get back on the bike permanently, I hatched the plan of biking up trails to the Lions, then climbing Mt Harvey and skiing down. I hadn’t been to Harvey’s peak in almost 11 years and figured it was high time for a return. This time, I managed to talk Jon and Trevor into this. Pickup from North Vancouver at 3:!5 am and we were off. Still kind of dark in the Lions Bay parking lot Jon and Trevor at the Lions – Harvey intersection

The route is pretty straightforward. The hike to Harvey is well-described in several guidebooks. We ditched our bikes just before where the Lion’s trail intersected Harvey Creek at about 620m after about 2 hours of mostly pushing our bikes up the forest service road. Halvor Lunden likes steep trails – climbing up the SW ridge off Harvey. Load is as heavy as it looks Hitting snow at about 1100m The trail up to the ridgeline accessing Harvey is ruthlessly efficient – it goes pretty vertical without letup. We climbed to about 1310m in what seemed like very little time and took a rest at a clearing with a fine view of the Lions. After that it was pretty easy to pick up more trail markers leading up the ridge to Harvey – bootpacking was really easy and the snow quite supportive so we didn’t ever put on the skins on our skis.

Posers on the ridge 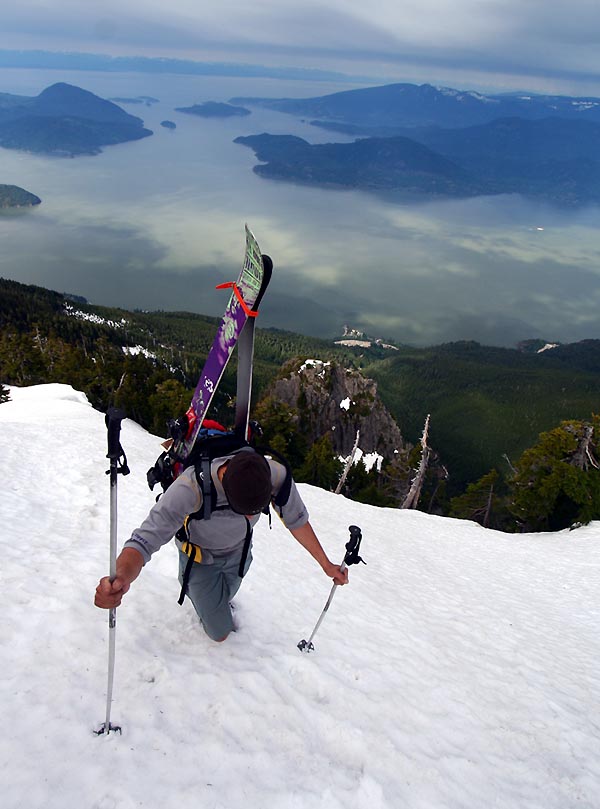 Approaching Mt Harvey. Howe Sound and Horseshoe Bay in the background. We never did use our skins as bootpacking was so easy

Getting to the peak we hiked along a ridge making sure to stay away from cornices. We had left the parking lot at 4:45am. Even after a lot of stopping to take in views and rest we topped out at 8:45am. We took our time at the peak – waiting for the sun and drinking in the view. All of us were supposed to be at the NSMBA’s Fromme-a-thon ripper. We ride Fromme a lot though and aren’t up on a ridgeline with views like this all the time. 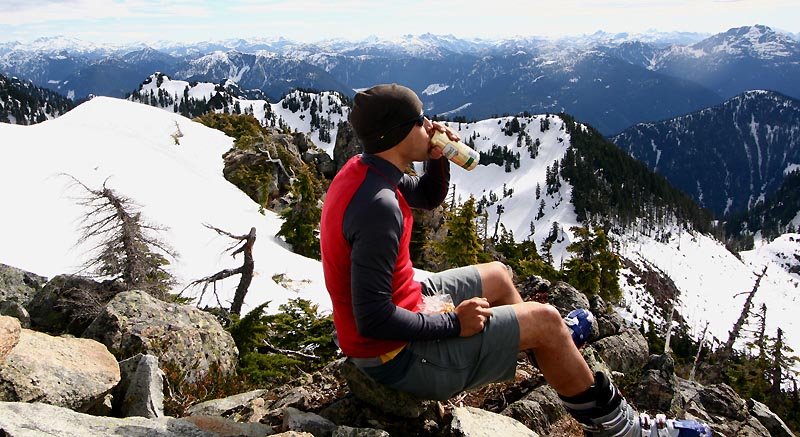 Trevor has a tall-boy, Jon checks email, Lee poses for the summit shot

Getting ready to ski – Lions as the backdrop Jonathan on a downclimb

Surprisingly snow conditions were fine. Ski pen was pretty reasonable and although it hadn’t frozen overnight as temps were too warm, stability was not a concern. Of course, things might have been a bit different if we started later. We had good snow down to 1300m at the clearing. The snow from 1300m back down to 1100m where we resumed bootpacking wasn’t great but the tree-skiing potential on these slopes is pretty good. Trevor and Jonathan skiing the trees

Going back down was a lot easier with bikes. We were back at the vehicle and down in the sweltering heat of sea-level at 2pm . Riding out is a lot easier on the knees then hiking out. This entry was posted in 2008, ski and tagged bike and ski, Harvey. Bookmark the permalink.