The next day we head back to base camp on the Tusk Glacier. The trip back is in bright sunlight – probably the best weather of the entire trip and its a shame that we weren’t at camp so we could have given Clemenceau a go. Still, the days are long and we decide to try to summit Irvine. Our start from 2240m is at about 2.30 pm; a little late but its cold. We’re quickly navigating past the two icefalls on the lower Tusk-Irvine bench. The steepish slope up the middle is perfect avvy terrain so we spread out and are treated to sluff running off the sun-warmed chutes on the face of Tusk. I swear that every chute that could possibly run, did. The snow is deep on this glacier close to these seracs coming off Tusk and Irvine; 300 cm plus. 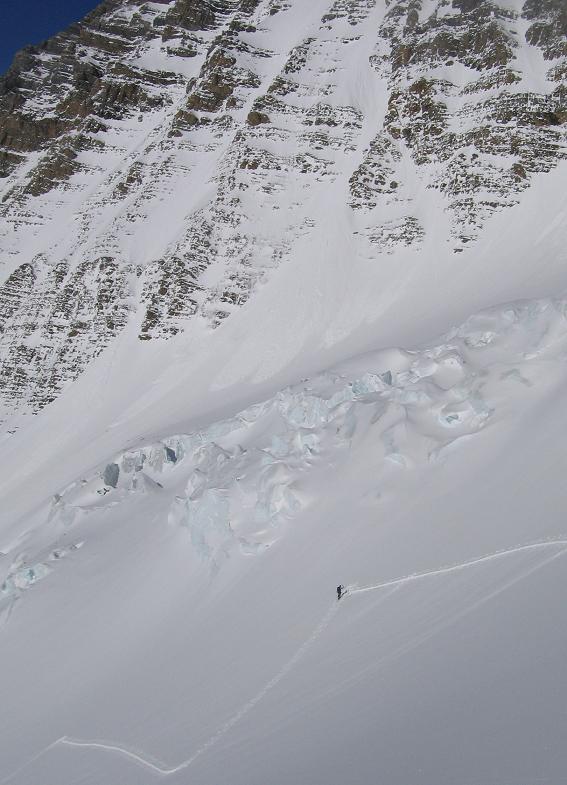 Now it starts getting a little shallower on the crevasses at the 2650m mark as we get closer to Irvine. Out comes the rope and out comes the probe. 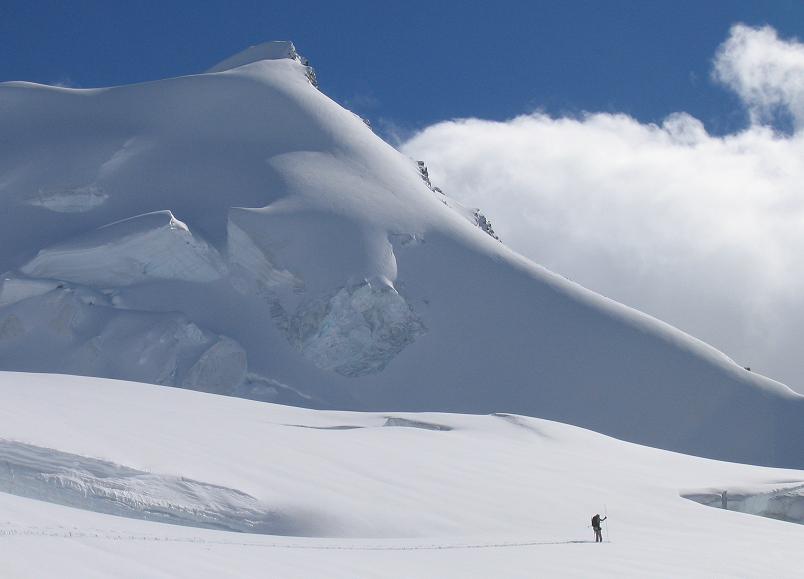 Sharon isn’t too interested in summitting so we leave her on a nice protected rock ridge just under Tusk-Irvine Col with lots of down and off we go with ski crampons up to Irvine. Then the ski crampons aren’t enough and its boot-pack time. Here’s Jonny with the east face of Shipton in the background. This is one of those times that the picture doesn’t exaggerate. That east face really is as steep as it looks.

It isn’t the smaller Shipton we’re interested in though but the slightly taller Irvine. Here’s Jonny just as we start running into depth hoar. The funky layers are around the rock ridge we are using to approach the peak. 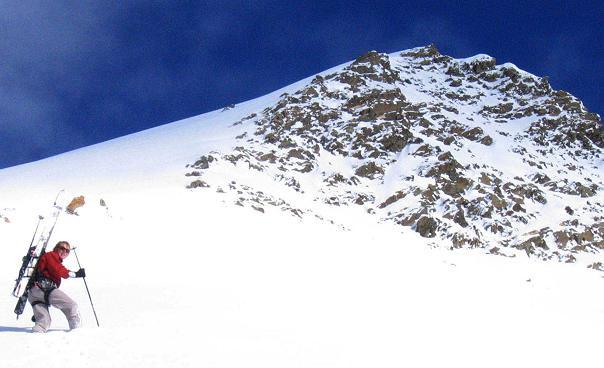 After a few fruitless attempts to get by the depth hoar we decide not to chance it. The snow feels like we’re stepping on champagne glasses and it likely won’t improve as we get closer to the more wind-blown peak. Its too bad but at least we get to 3000 m exactly – just 50 m short of summit. Its quite a view from here. I think the highest peak in the background is Robson. Although Robson is well over 70 km north of us, I am told by Steve of Alpenglow Aviation that its possible that we could have seen it if the weather was clear enough – and it was clear today.

Now its time to ski. Our first section will be a straight 1000 foot shot down a 40 degree slope. I promise to dig Jonny out if the slope releases and he gets to go first. The ski cut looks good and off he skis; that boy can fly! He makes maybe 4 turns down the slope. I make maybe 7. I can’t describe how nice the snow was and how hard it was to choke back insane hysterical laughter as the pow shoots all the over place. This is what makes it all worthwhile. 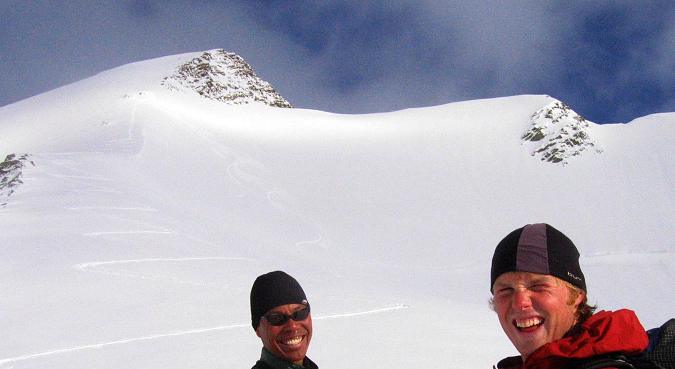 Then after navigating the thin snowbridged section cautiously we’re back down through the lower-angled stuff to camp. Sharon makes tracks. 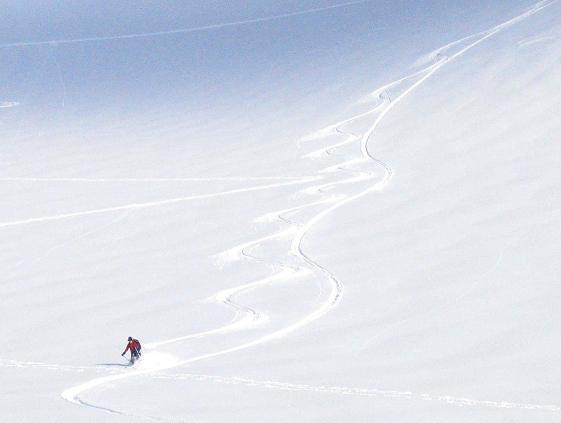 Here are our tracks and route. The first picture is taken a little higher in elevation then the

We slept very well and content that night. The next day the plane came down on schedule and picked us up uneventfully.