“Don’t let your summer be a bummer. Get yourself a Hummer” – Chaz Romalis

Cove’s Ti Hummer 29er hardtail is a long-rumoured long-awaited reintroduction of a classic North Shore hardtail aimed at aggressive technical terrain. It will be be sold as a frame-only ($3,100 Can). The small frame weighs in at 1.8kg/4lbs while the medium weighs in at 1.95kg/4.3lbs.

In the early 80s a group of British Columbia’s bike nuts living in North Vancouver wanted to ride bikes. Chaz, Nummers and Dewey started importing bike parts and bikes from California to their home in Deep Cove and Vancouver’s first bike store was born. Since then Cove Bikes has set up on Main Street in North Vancouver, growing, then shrinking, then growing again. Cove has a long chequered retail background. They’ve also got experience with their own line of products; including hardtails and dual-suspension bikes.

Cove’s first bike was the Hummer hardtail produced in the early 90s. It was something of a revelation for hyper-technical riding featuring (relatively speaking for its time) slack geometry, long top tubes and short chainstays and stems. Things have come full circle as the Hummer Ti 29er hardtail is also their latest bike but with even more aggressive numbers. This should go a long way to re-establishing Cove’s brand as synonymous with tough frames capable of dealing with the difficult hyper-technical janky terrain endemic to local Shore trails 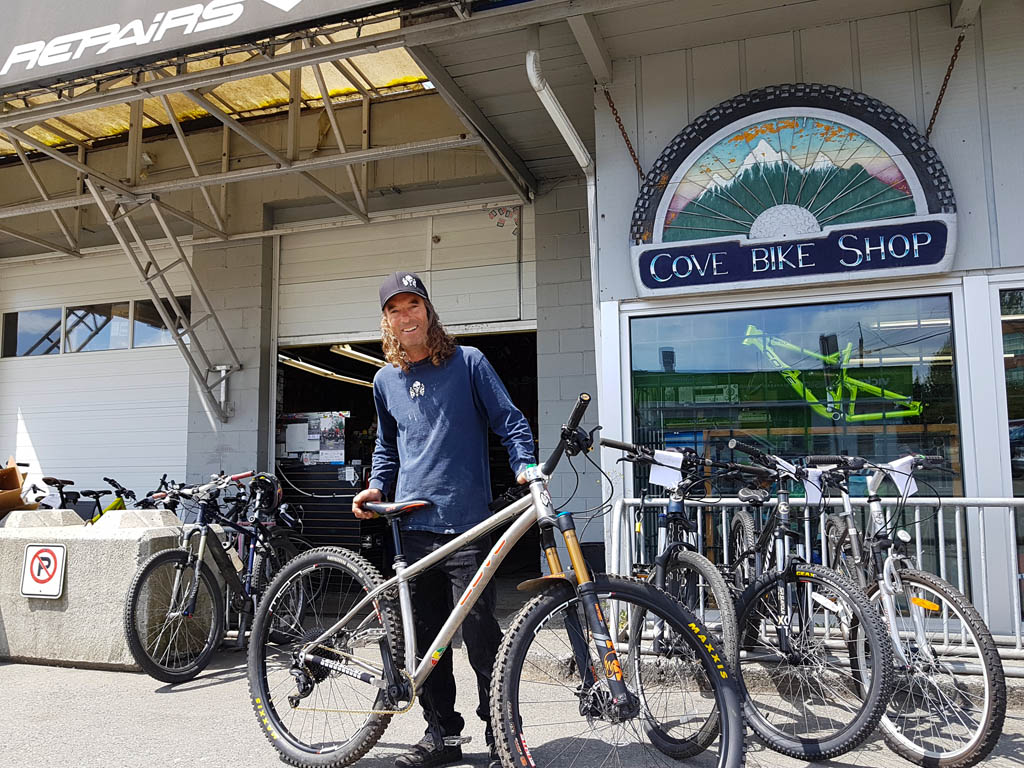 Chaz with a production Ti Hummer in size small. The Ti 29er Hummer is made by Lynksey Performance a family-owned company from Tennnesse of Litespeed fame; keeping frame production in North America. 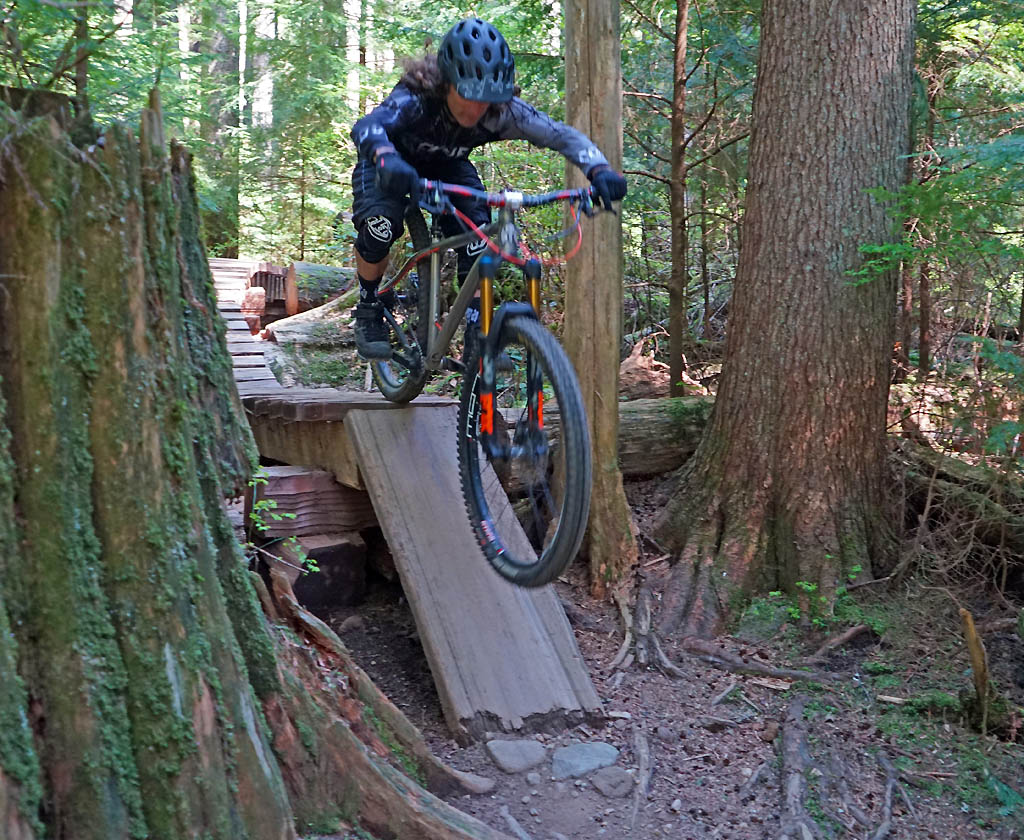 Chaz testing out the goods on C-buster. A trail first built by Cove mechanics on days off.

So why a hardtail? And why Ti? Some might bleat on about mystical simpleness, elegance of design plus lack of complexity. There’s no sugarcoating this. The bottom line is that there’s not that many really good objective reasons for a hardtails given that full suspension designs are now so good.

I wanted to review a Ti hardtail “because it’s there” with “it” being 29er geometries. Do you want rideable bicycle art? Do you want something you can ride for a long, long time (ignoring the industries’ propensity for hara-kiri asinine standard revisions?) Then consider a titanium hardtail. 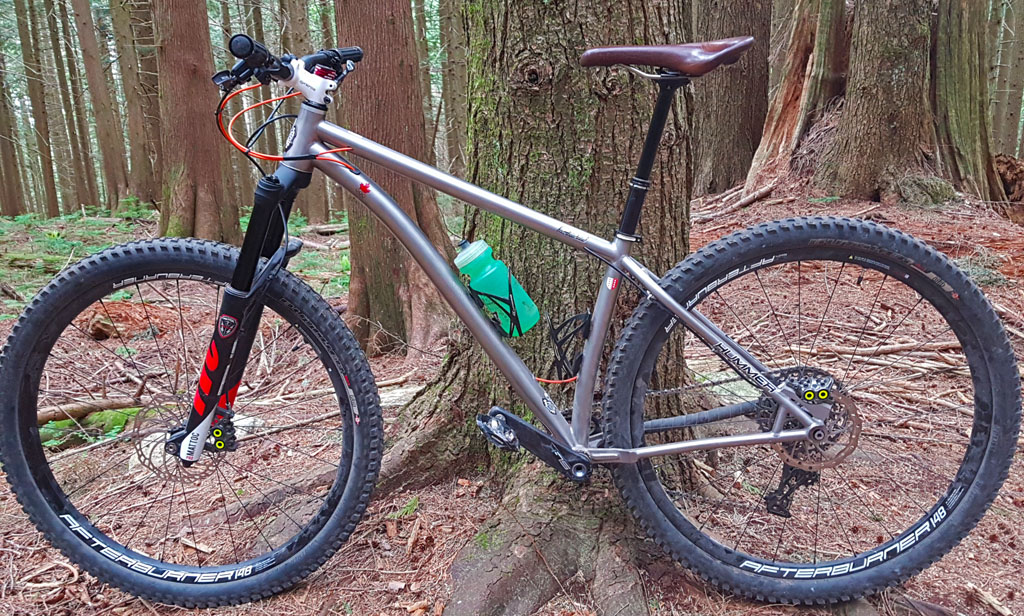 For the purposes of this review the build I selected was a mix of Manitou, FSA and Magura. On hearing this someone said to me – “that’s very 90s”. But I had just finished watching The Moment movie. It occurred to me that this was a hearty compliment. Lots of good things happened in the 90s (not just the Smashing Pumpkins) and bikes were simple and tough. They had to be to survive what we did to them as we explored the limits of trailbuilding and riding.

Accordingly picking components for the Cove Hummer Ti that were reliable, good value and could handle abuse were my priority. More about the components on part 2 of this review 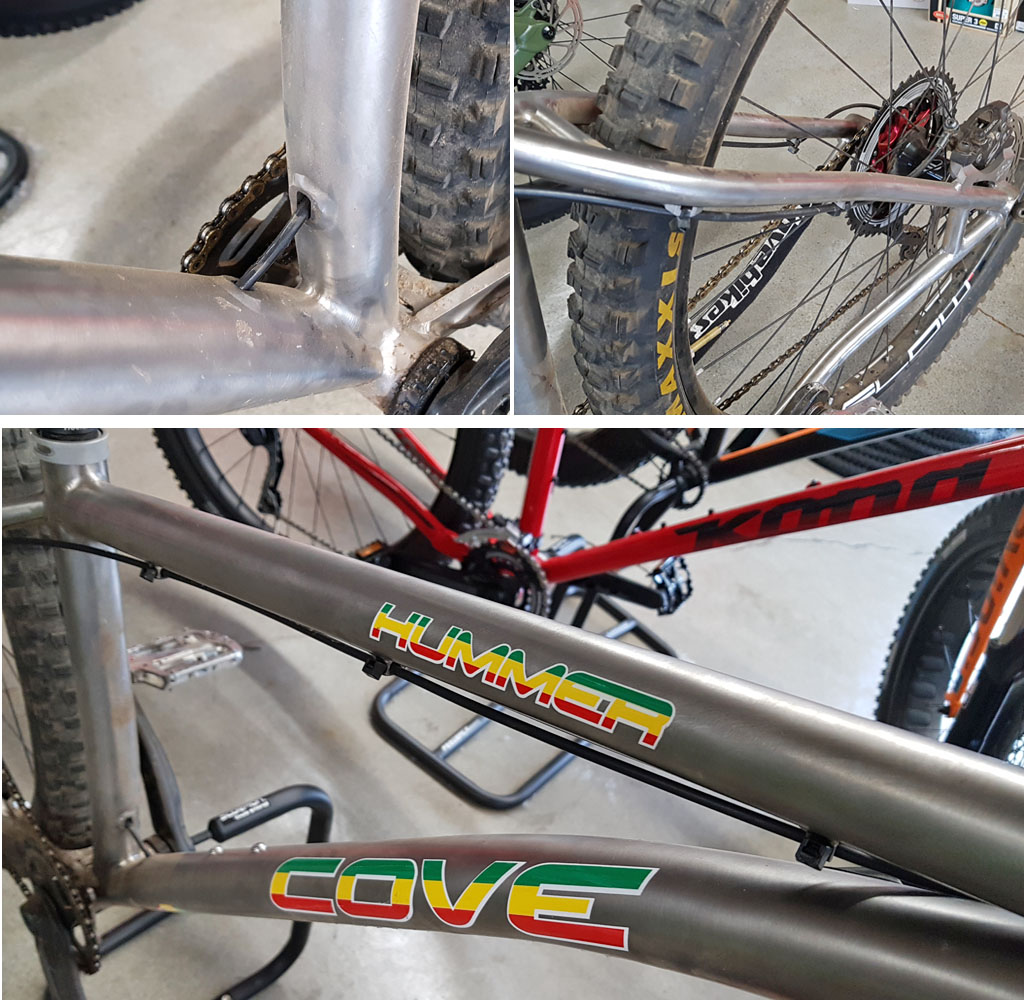 Production small Hummer Ti 29er. Only one set of water bottlebosses in the small frames. Med/Large will have two sets of bosses and will also share the same external brake cable routing 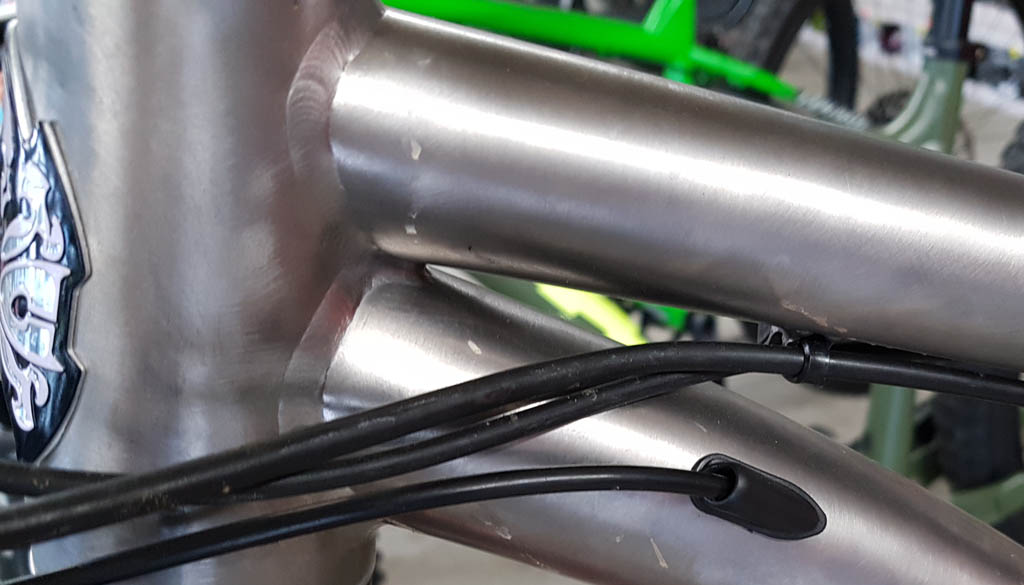 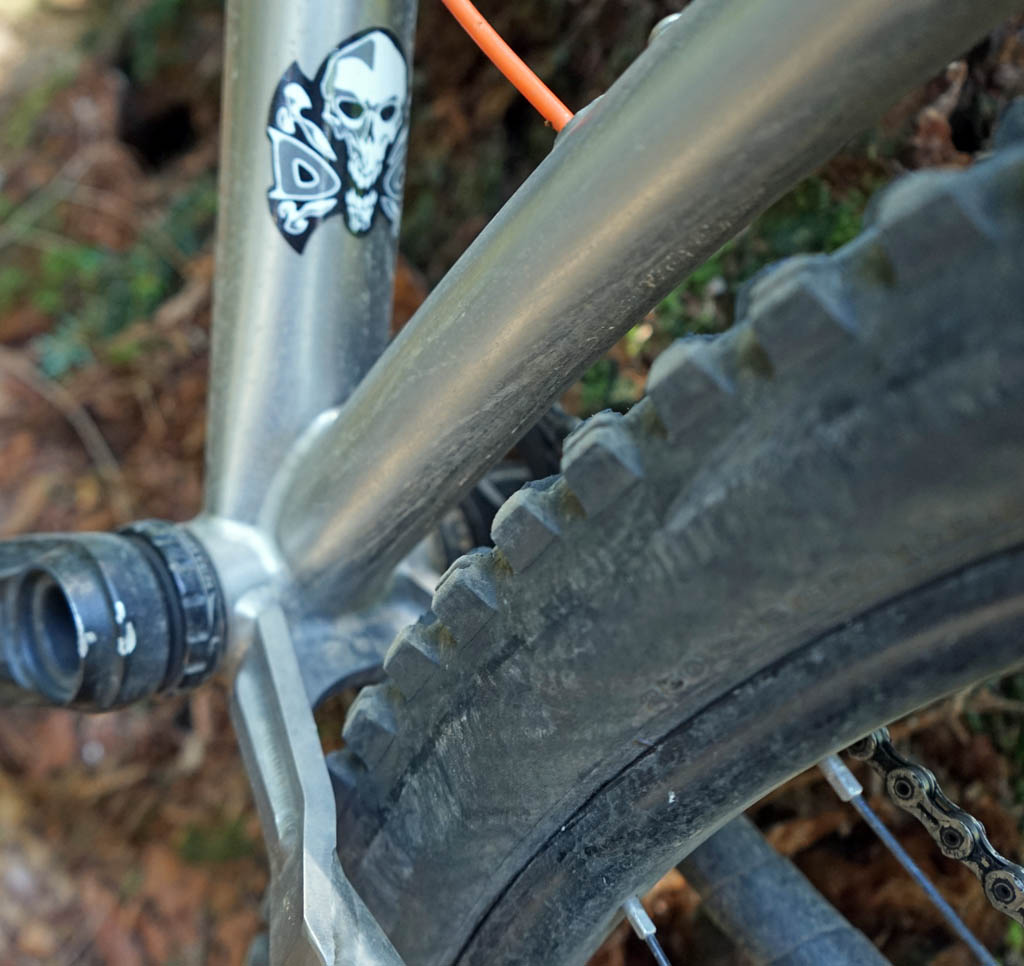 Lots of space for meaty rear tires. Pictured with 2.3 Butchers but 2.6 Butchers easily fit. The Hummer Ti rear stays will clear up to 27.5 x 2.6 tires so is NOT plus-size compatible. 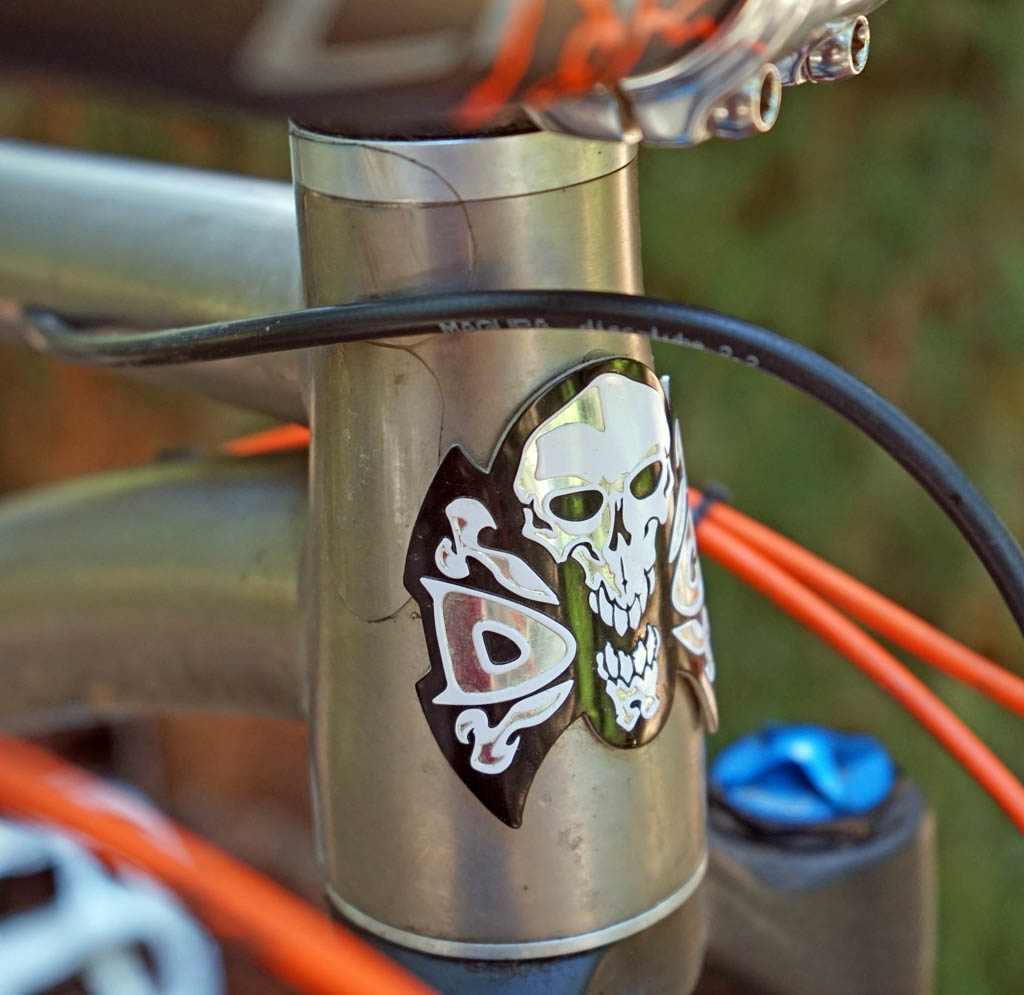 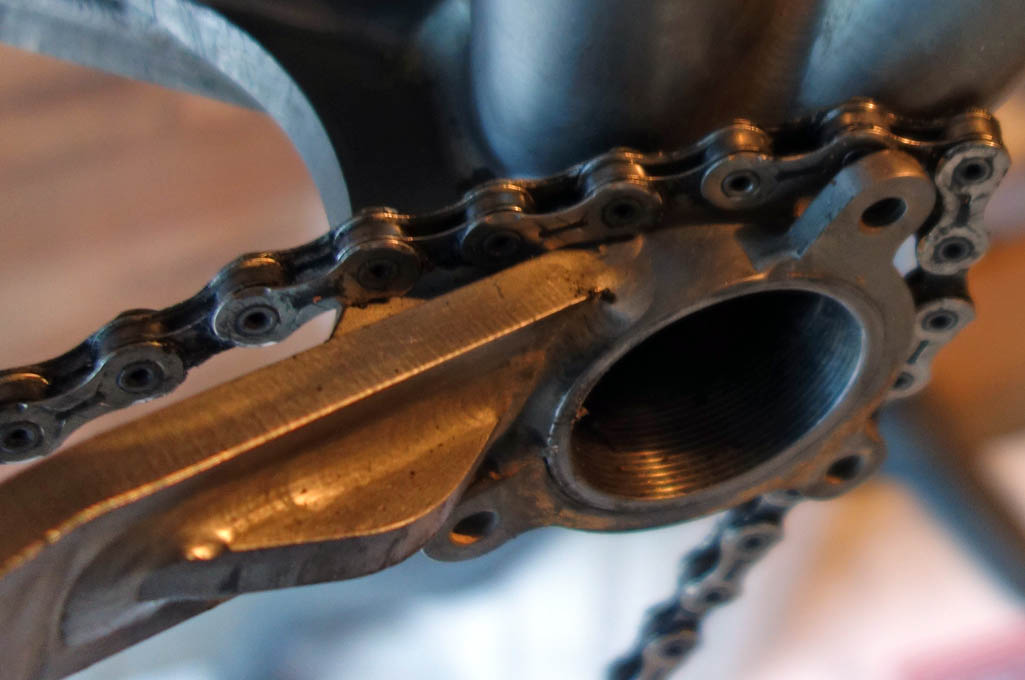 The Cove Hummer is presented in three sizes – Small, Medium and Large. The prototype featured here is a Medium.

My medium build on this Hummer with stock FSA alloy Afterburner wheels and Specialized Grid Butcher 2.3 tires is 12.3kg/ 27.1 lbs. Slapping on more meatier tires (Minion DHF/DHR 2.5 and 2.4 got the weight up to 12.8kg/28.3lbs). With the more blinged out light FSA SL-K carbon wheels and lighter Specialized Control Purgatory and Slaughter 2.2 tires my lighter build is 11.8kg/26lbs.

Cove does offers build kits but you’re invited to get a frame-only and provide your own build kit.

Random selection of other bikes as comparables

Review of the Cove Hummer Ti

But that would be too an easy a review. Instead I will be overly verbose. Arguably there is no known, agreed upon quantifiable metric where a hardtail is “better” than its full suspension counterpart. And if you’re seeking that magic number, you most likely will not find it. If your metric is based on faster or smoother, you won’t find it. The elusive joy of the hardtail is defined by the experience of being able to be precise; to pause on a steep technical downhill to reassess and adjust the trajectory; to lunge and ratchet through rocks and roots; and to move the back end around on tight terrain.

What all this verbosity means is that hardtails are not for everyone. And most definitely this doubly, triply applies to titanium hardtails. To get this out of the way if you lust after a Ti hardtail you desire rideable bicycle art, probably have another bike (bikes?); and already have a bag full of riding skills.

Titanium is a singularly strong material which can be drawn into tubing then welded into shapes customizing ride feel. For the price one pays for a Ti hardtail a prospective buyer will want not only long-lasting quality but also a balance between compliance in ride-feel combined with precision. After some 40+ odd days of being on the Cove Ti Hummer 29er I would say that this bike has achieved this perfection of balance.

I first had a light FSA-SLK carbon wheelset on the Hummer 29er which was a mistake; and a solid vote for mediocrity. The bike climbed and accelerated like a goat on road and gravel but skinny rims and tires make for sub-par performance on the tech. If you primarily ride on smooth, non-technical trails then go for the lightweight build. Trading off for a slightly heavier (but still light by most standards) FSA Afterburner alloy wheelset and medium weight tires made the Ti Hummer 29er much more capable. Putting the Maxxis Minion DHF/DHR de rigueur combo on made the Ti Hummer a trail slayer. 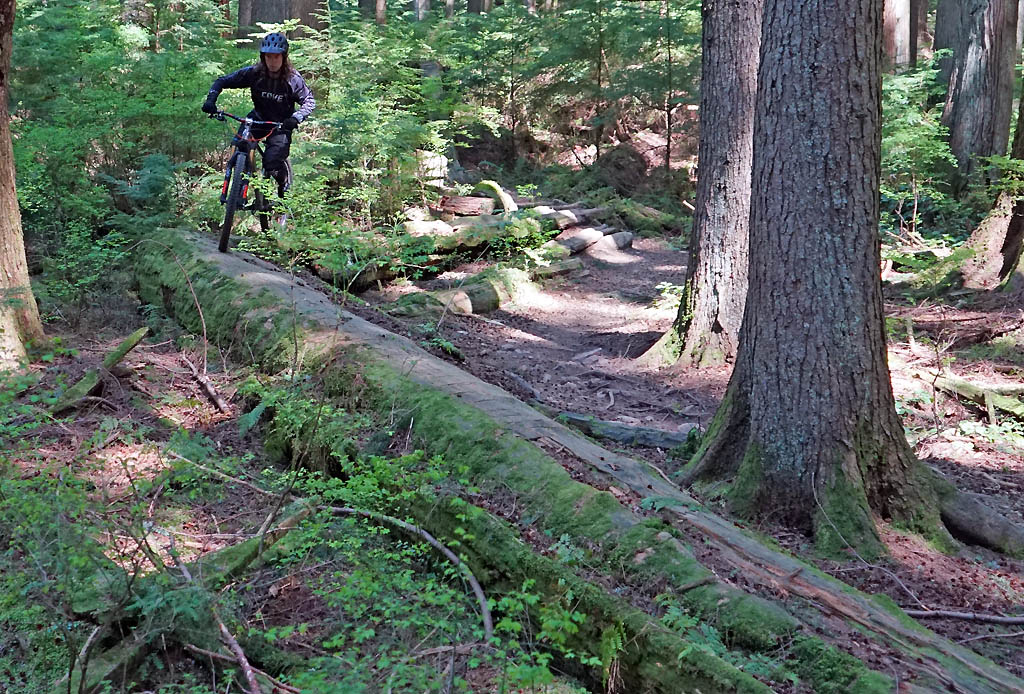 Chaz on C-Buster on a tight technical log ride

Axiomatically hardtails require precision. No amount of miracle Titanium give or springiness can make that requirement any less necessary for the Cove Ti Hummer 29er. Loose, rocky, rooty climbs are never pleasant and that’s definitely more the case on a hardtail. Delicacy and finesse is what you need for technical climbs when you lack properly designed rear suspension.

Conversely where the hardtail shines is when you need to accelerate; to put power down quickly. When that happens the Cove Hummer 29er is stiff enough that there’s instant feedback. Lunge, ratchet or accelerate your power comes on instantly. This is perfect for timing technical sections and cleaning them. However, the benefit of responsiveness for short sections is more than offset by how much hardtails get bounced around on the tech. 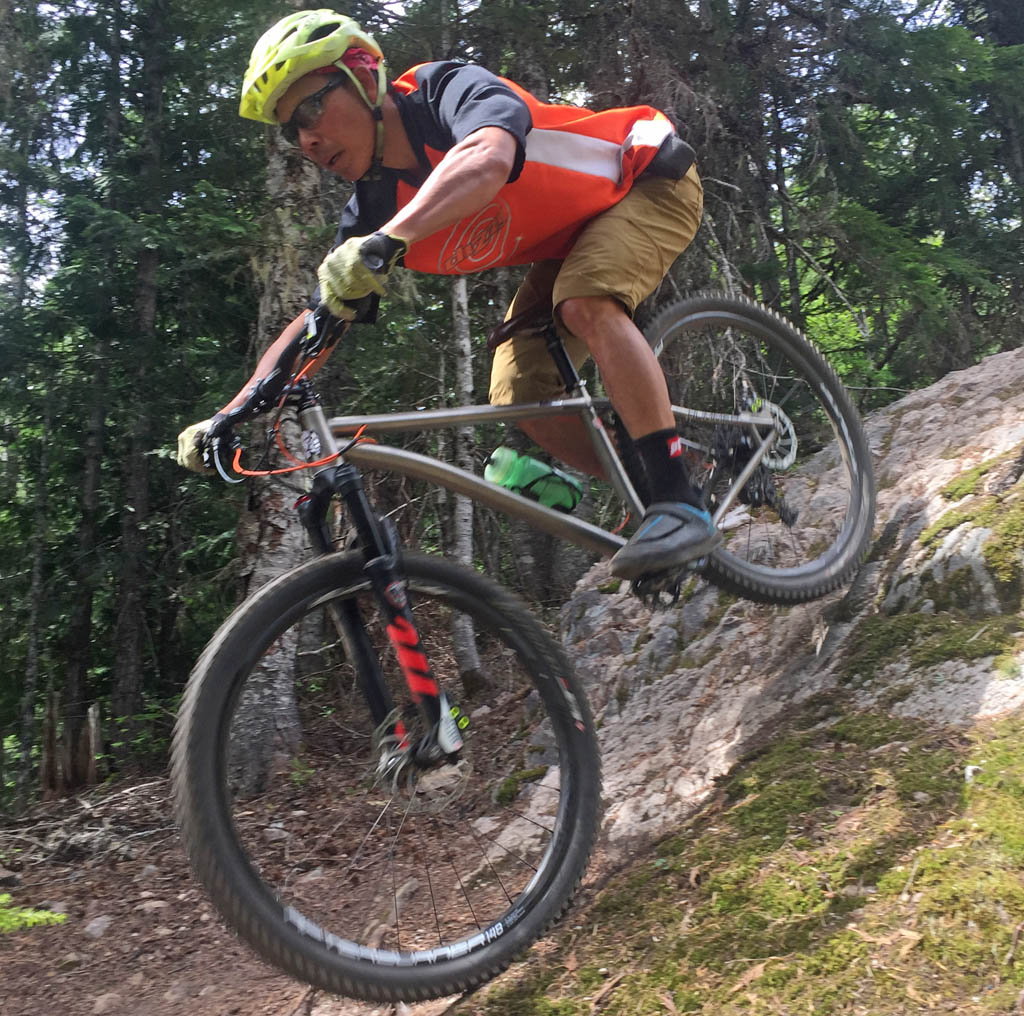 Lee on High Society in Whistler

So hardtails aren’t very forgiving. So you need to be more careful for timing. Big surprise there (duh)! What was surprising to me was how massively capable the Cove Ti Hummer 29er was on the downs.

A bit of background on that statement. I started racing XC on alloy, steel and eventually Ti hardtails but all of the 26″ wheeled variety and all with the standard “NORBA geometry 71/73 angles”. The 29er wheel with its massive ability to carry momentum and roll-over tech has been a boon to hardtails. Moreover geometries have come a long way. Combine the two, bake it into the miracle material of Titanium (with its light weight, strength and snappiness combined with give in all the right places) and the combination is astounding in its versatility.

At the outset it’s worthwhile noting it took a while to learn how to ride the bike. And I believe that to be independent of the frame material and more to do with having confidence in the 29er wheel’s ability to carry momentum through technical (whether steeps, rocks or roots). One learns (or in my case re-learn) how to corner, steer, jump and plow differently. A massive benefit of the bigger tires, of course, is the added give of all that rubber when things get a bit hairy. As previously mentioned hardtails are precision instruments; sadly this rider is not as laserlike precise. The bigger tires, the wheelsize, the (slight) give of titanium; all that adds an extra dimension of speed and steep capability I would not have expected out of a bike without rear suspension.

Getting back to the theme of precision, where the Cove Ti Hummer 29er was simply outstanding was in tight, slow, technical trails. Coincidentally these are the kinds of trails I build, maintain and love to ride. There’s no shortage of these in the Vancouver – Squamish- Whistler corridor and I would imagine that many people considering a hardtail will find the joy of precise response in whatever slow, technical janky trails they might have. Need to pop a wheelie to drop a flat jump? Need to move your back end around to get from one obstacle to another? Need to ratchet and lunge for an up and over move? Need to do a front-wheel endo to get around a tight corner? The Cove Ti Hummer 29er had that instant magical control letting me setup, catch a split-second and then make the move.

If your network isn’t that technical and your trails are more of the fast, loose chunky variety then I question whether any hardtail makes sense (other than for N+1). Waxing rhapsodic about the miracle properties of titanium or the 29er wheel aside, you’re going to give up control at speed on the Cove Ti Hummer 29er. If you’re looking to get from A to B as fast as possible this isn’t the bike for you. Conversely if your journey envisions unnecessarily doubling up roots, playing on skinnies, riding unnecessary lines, going sideways for the hell of it or just generally getting loose then perhaps this is the bike for you. 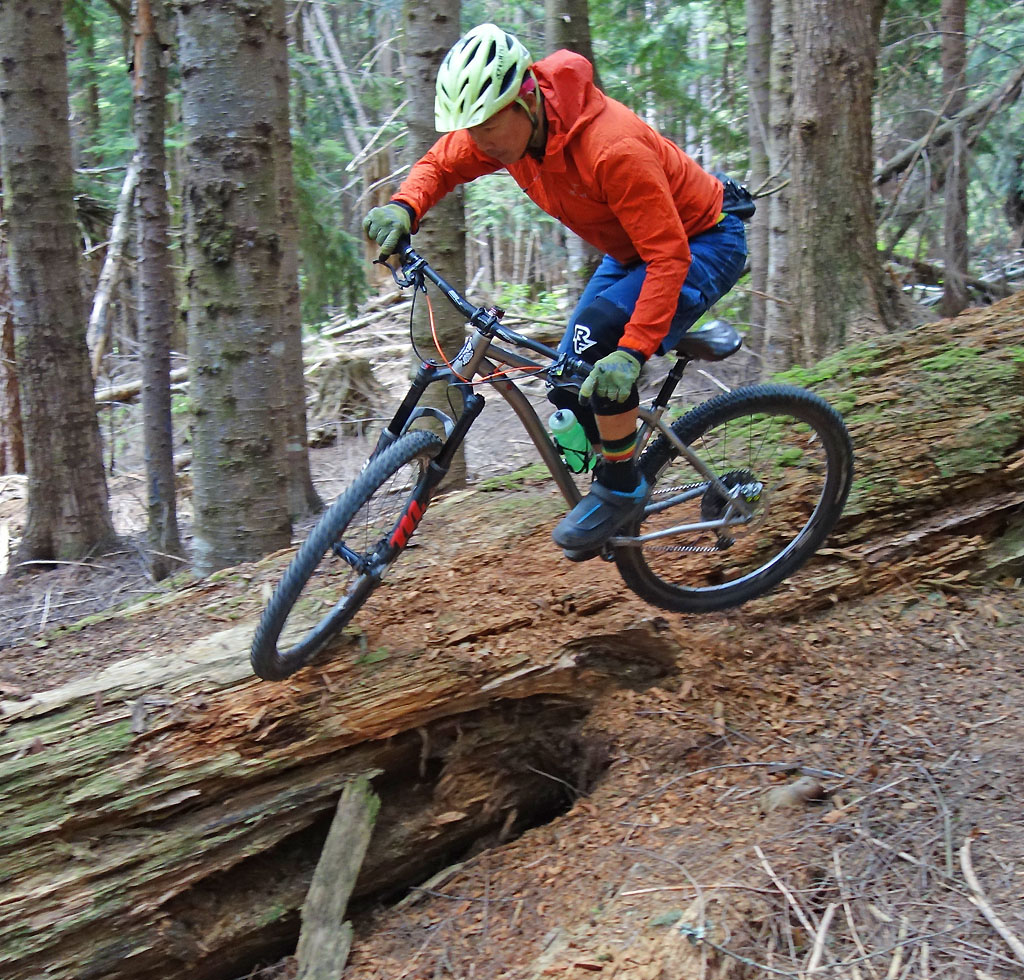 The bottomline is that the Cove Ti Hummer 29er does go up and down like a hardtail. You will get bounced around unless you take the time and effort to figure out how to not get bounced around. If you value precision in how you ride versus speed and/or simply blasting through things you will enjoy this bike. If you are a bike nerd who loves beautiful things that you happen to be able to ride then you will love this bike.