The high pressure breaks up a little today for our last tour of the trip. The clouds don’t break up the view of moonrise from what must be one of the most spectacularly located toilettes in this part of the world. Sorry about the picture quality but the seat was cold …brrrrrr 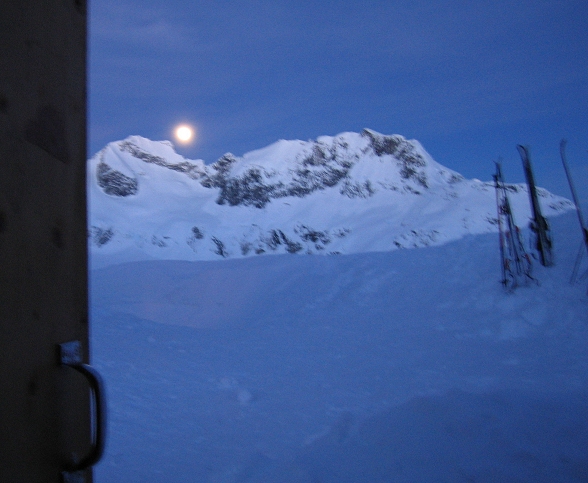 Our route today takes us from Moloch Hut to Fang Col via the Juliana Glacier then over to Diamond Platform. Then we head to Salbyt, ski Salbyt South and then head to Diamond Col – down Diamond Face; then up to Tumbledown – ski Tumbledown East and then back to the barn via the Needle Icefall. 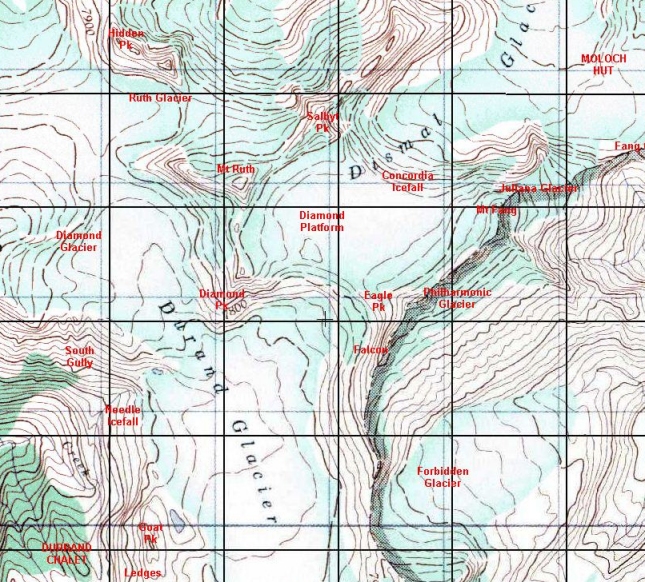 After cleanup we are off. It is with a bit of sadness and hopeful au revoir that this picture is taken of the Moloch Hut. 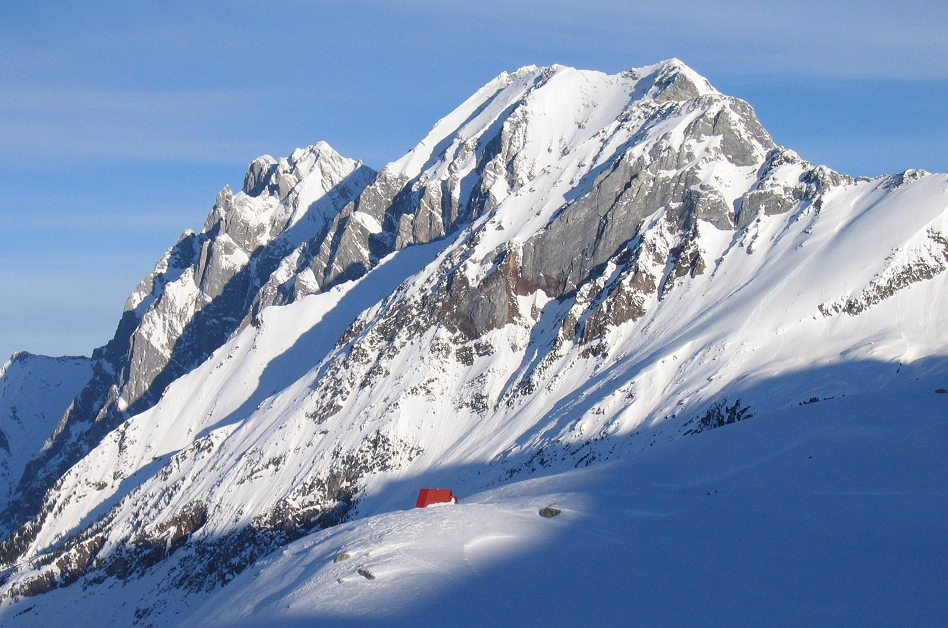 We repeat our trek up the Juliana Glacier towards Mt Fang. 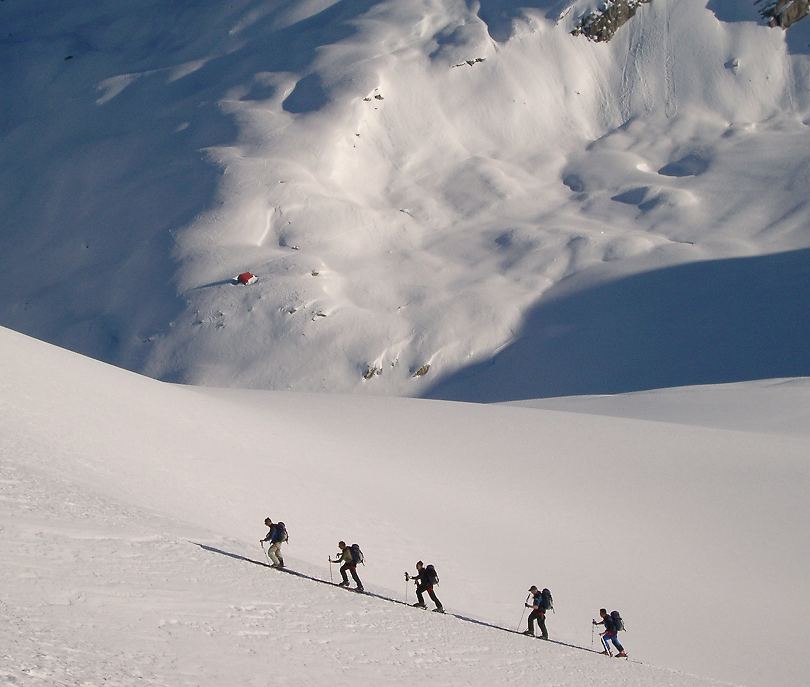 Then its off down to the Diamond Platform – stay in the tracks please as there’s crevasses and icefalls over the place. The run ends at 2472m 0434769 5683166 , a relatively short 200m run down from Fang. Concordia Icefall is to the right with Salbyt Peak, our next destination, just above the icefall.. 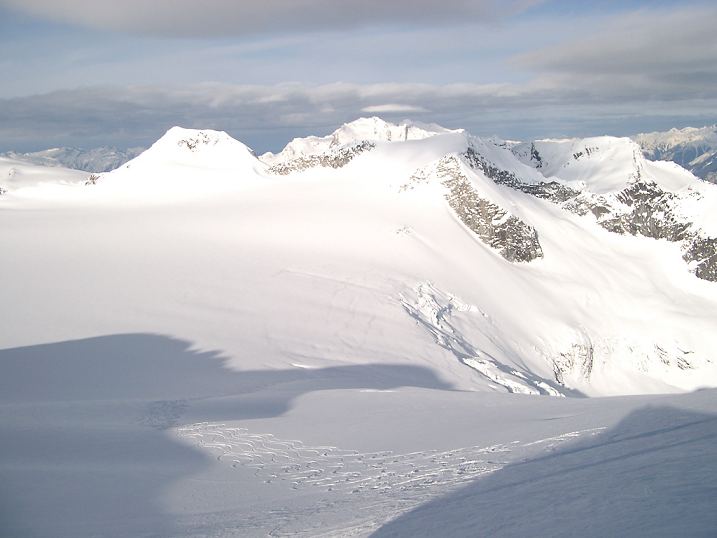 Up we go to Salbyt Peak at 2703m – 8920 ft. Mt Moloch looms large dwarfing just about everything. 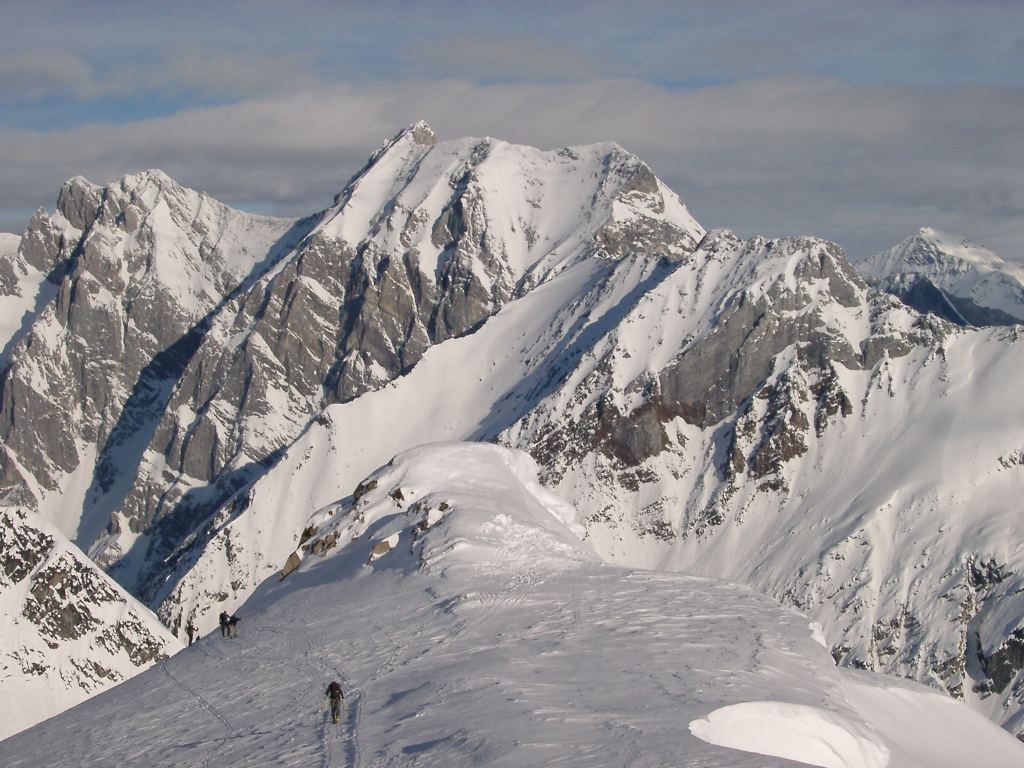 The view from Salbyt Peak as clouds start to build and the blue skies disappear.

The group on Salbyt Peak. From left to right; Lee, Steve, Mark, Deb, Sharon, Alan, Carl, Joel, Bill C and Bill R. So far no-ones broken any gear, fallen into a crevasse or so much as cut their toenail. 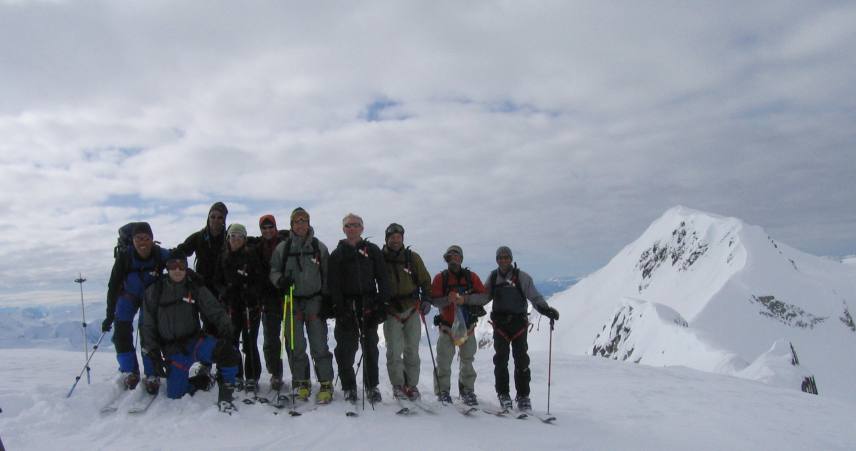 Solar radiation has really been hammering the slopes. The ski down Salbyt South is no great shakes and I’m glad to be on heavy alpine gear and not tele-tumbling through breakable crust. We head over to Diamond Col, bootpack a fine little ridge with exposure on either side and prepare to ski down Diamond Face. Here’s an otherworldly view of Symphony Peak, Snow Cap and Centrale from Diamond Col. 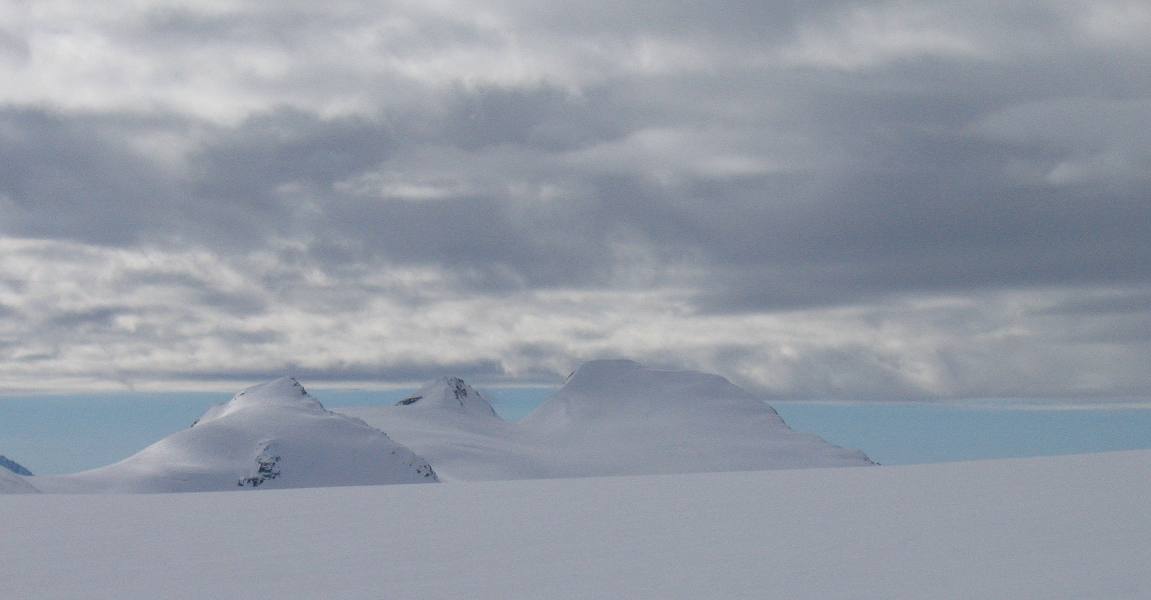 Then we ski -or rather try to ski down Diamond Face which is west facing and also has been sun-baked and also wind-blown a tad. I make it through the flat light by following Rochus. I’m not sure how the others make it. Maybe they follow the potholes left by cartwheeling skiers? Joel doesn’t seem to have a problem on this snow though. 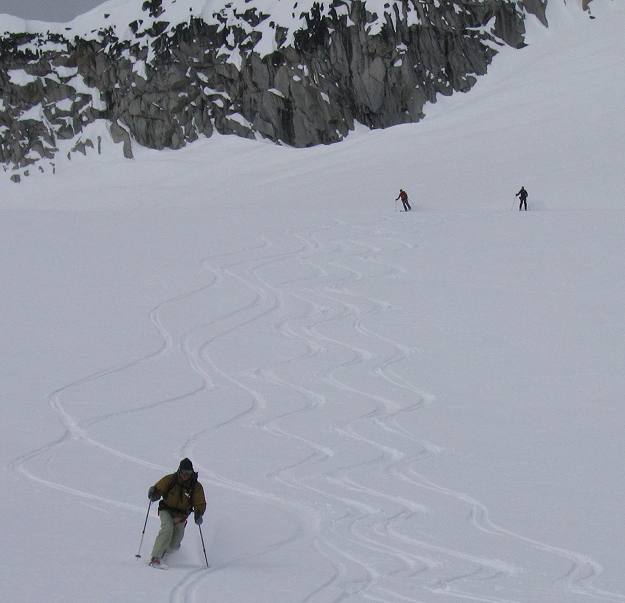 The top of Diamond Face is 2626m 0433189 5683008 just in the shade of Mt Ruth ; the bottom at the Diamond Glacier where we take a break is 2374 0432255 5682636. From there its a short skin up to Tumbledown where we hang out for a bit near the radio repeater tower while the south west wind attempts to blow more snow off the peak. Although it isn’t snowing, the light is now really flat and it doesn’t take a brain surgeon to realize that the crusty snow we’ve skinned up is going to be quite the trick to ski down. Again I just follow Rochus and make it down OK. For once I get to see mr consistency Steve cartwheel. 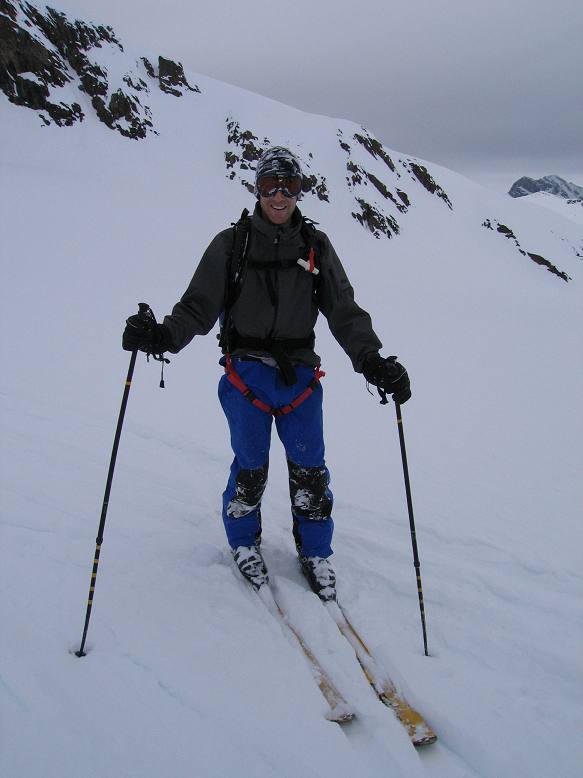 Then its off down with some tricky navigation through the Diamond Glacier and the Diamond icefall and back to the barn. Everyone makes it back in one piece. Our total for the day is 1440m of climbing. Our trip total is 11910m or approximately 39,000 feet which puts us just about at the average for groups in Classic SME weeks.

Here are some things to note about Ruedi and the Selkirk Mountain Experience. Bear in mind that I’ve never been on a guided trip before and that other huts in which I’ve stayed have been relatively primitive Some of these are not noted in the brochure..

1. It is relatively luxury; double ply toilet paper, energy saving bulbs, flush toilets the works. Pay attention to the brochure and the packing list and bring what you need. I might recommend 3 pairs rather then 2 pairs of socks.

2. Food is excellent. There’s a lot of it. I probably ate more then 5000 calories every day.

3. All the staff are exceptionally professional. They are attentive and great at making you comfortable. At first it feels strange to be so spoiled – as opposed to freezing in a snowcave – but its not a bad thing.

4. Be on time in the morning – they will leave without you otherwise. This is IMO a good thing!

5. Make sure your boots fit; this is not the kind of trip to try to shake down new gear.

6. Pay attention to what the guides says but especially to what they do. Ruedi’s communication is not the greatest. If he is putting on his pack at the top of a climb, you had better be getting ready and putting yours on too. He won’t spell it out for you. Rochus is more willing to give instructions but even so, please listen to what they say.

7 . It will be miserable if you are the caboose of the group. IMO this applies to all big groups in the backcountry in any event. Its a pain in the ass getting over a knife ridge or up a icy traverse last but especially so if you have a very impatient guide bellowing out incomprehensible directions at you. So if you are slow or having a bad day, try to eat and drink while you are climbing (as you may not have the luxury of doing so at the top), expect to suffer and you won’t be surprised. This applies moreso to Ruedi then to Rochus who can be expected to take rest breaks now and then to let the group re-assemble. This is NOT North American style hand-holding and empowerment feel-good sessions

8 . Expect to be challenged. Expect your limits to be pushed.

9 . Expect to learn a lot. The snow safety and avvy risk assessment practises are great. Just watching what Rochus and Ruedi did for transistions, route-finding, descending, terrain management, equipment etc. is instructive. I learned more from Rochus mostly because he was with us most of the time.

8. Personally I like maps so I studied them once the next day’s routes were announced. I think this makes life a lot easier the next day as you then have an idea where the logical rest stops and amount of climbing might be.

9. The first climb of the day is usually a long one so get used to it.

This entry was posted in 2005, ski and tagged Selkirk Mountain Experience, Selkirks, SME. Bookmark the permalink.