Rochus has our vagabond group again as Ruedi has taken the other group on a tour to Moloch Hut. Today we are heading south of Durrand Chalet on a tour de glacier – to the Durrand, Symphony and Allalin Glaciers. 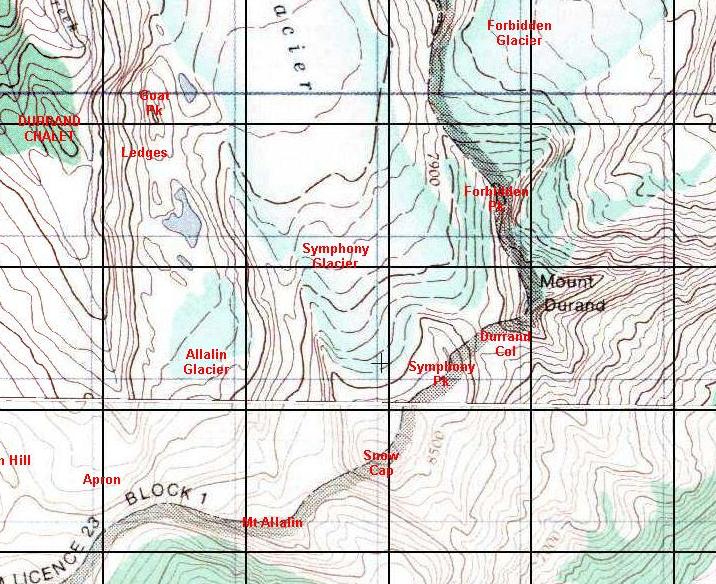 Yet again; the day is beautifully crisp and clear. What have we done to deserve this? It is so clear that from Symphony Peak you can clearly see Sir Donald, all the way over in Rogers Pass where we were just a few weeks ago. 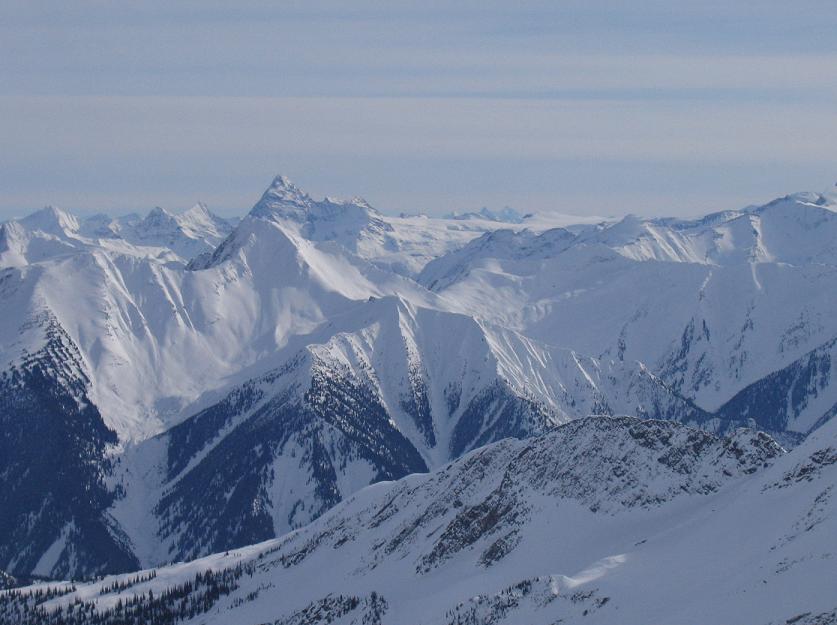 Symphony Peak is a bit windy so its not a surprise that the south facing Centrale South run is a mite crusty. It doesn’t faze Steve who is rapidly developing into the most precise skier of this group. Will he ever make a mistake? 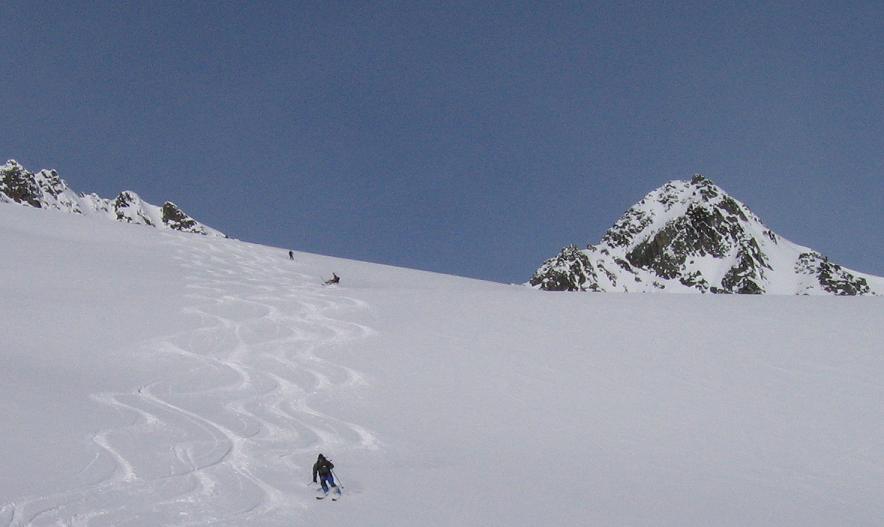 Deb punches through the crust layer following her submarining tip into the powder … ooooof. 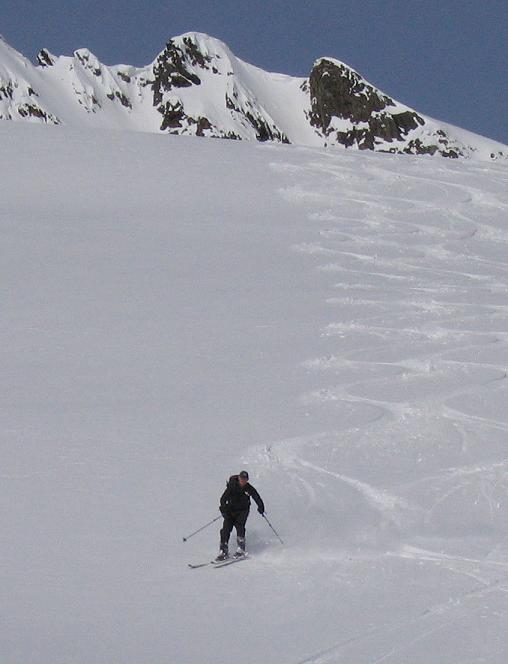 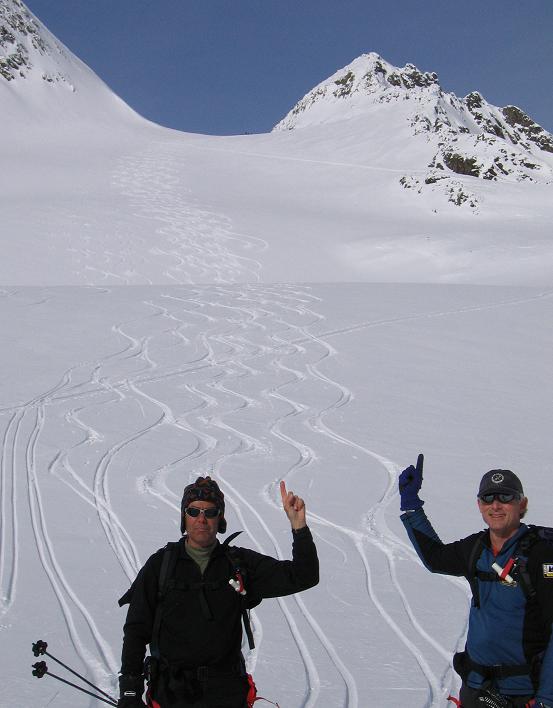 The top of Snow Cap is wind scoured but following the SME ethic of skiing from the top we scrape our way down the first few bits of the peak and then descend into what I can only describe as simply the most ego-boosting incredibly consistent boot-top/knee-deep powder I have ever had the privilege of skiing. Steve counts off 370 turns down this face – I must admit to losing count at 200 or so. Here I go following Rochus down Symphony Glacier. 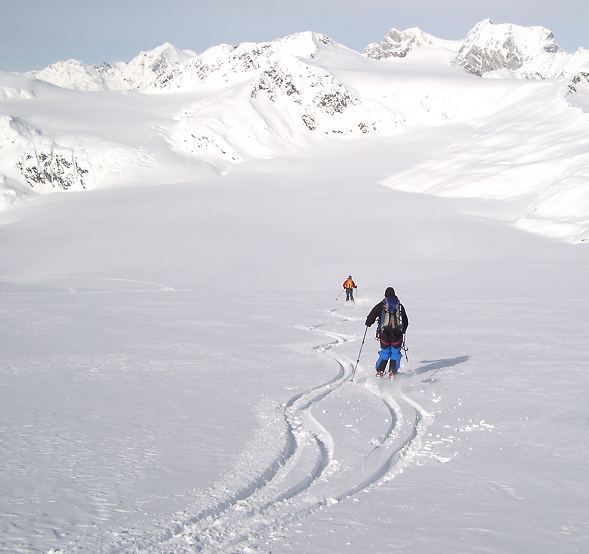 Here comes Joel and Bill down the first north east facing section with Snow Cap’s shadowy dome in the background. 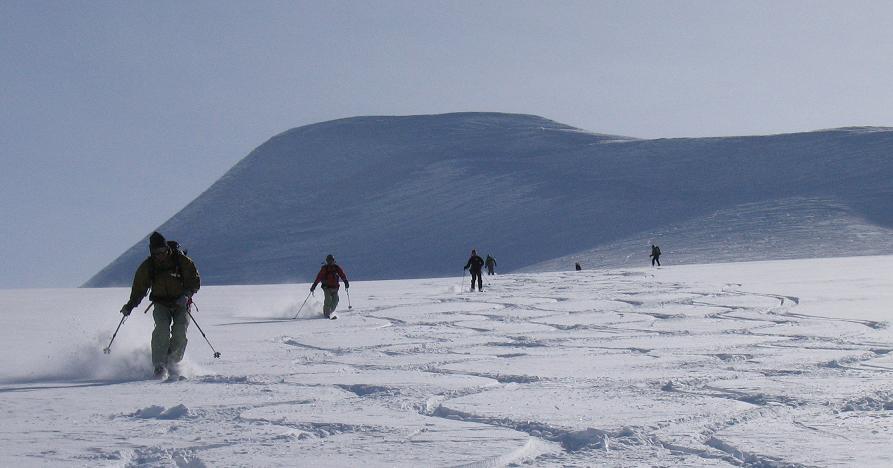 Carl and Mark coming down. Rochus’s track is on the far right with my line to left of his tracks. 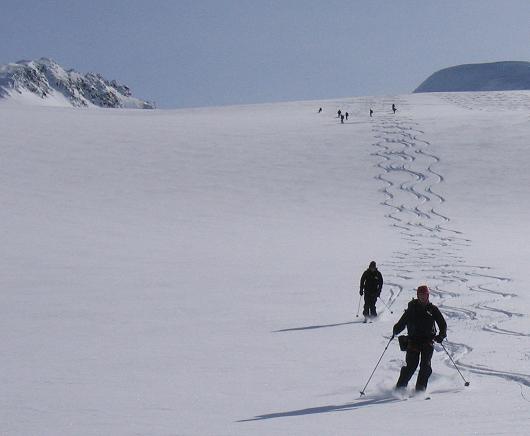 Neva on her snowboard is so fast she passes everyone. 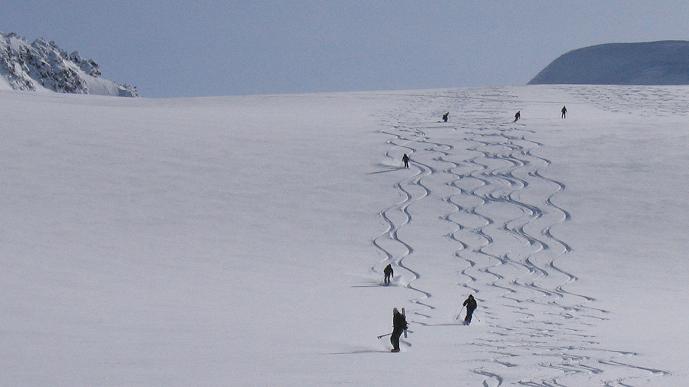 Joel and Deb on the second part of Symphony Glacier where I count off 128 turns. 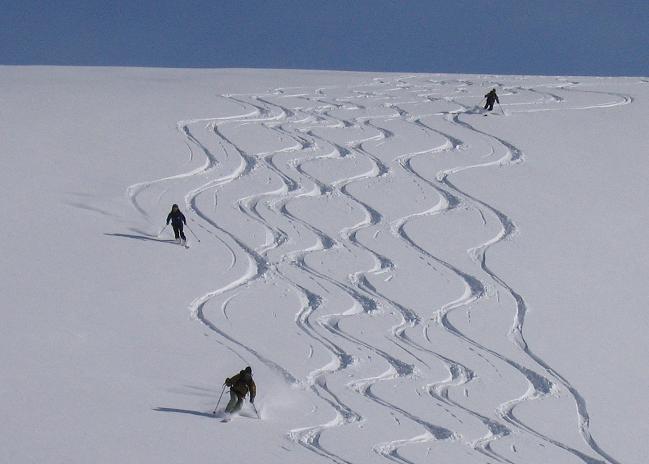 Allan taking an untracked line; Steve’s little squiggly jackrabbit tracks are to far right; quite the contrast between AT and tele tracks. 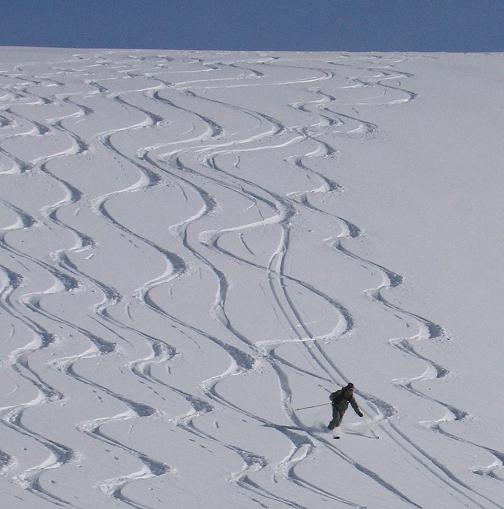 Neva goes for it. 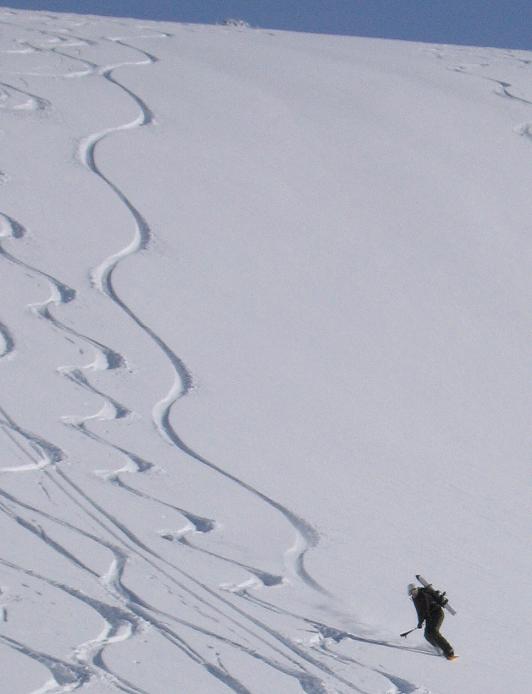 Next we skin up to Allalin Peak and then down to Allalin Glacier. Here goes Bill. 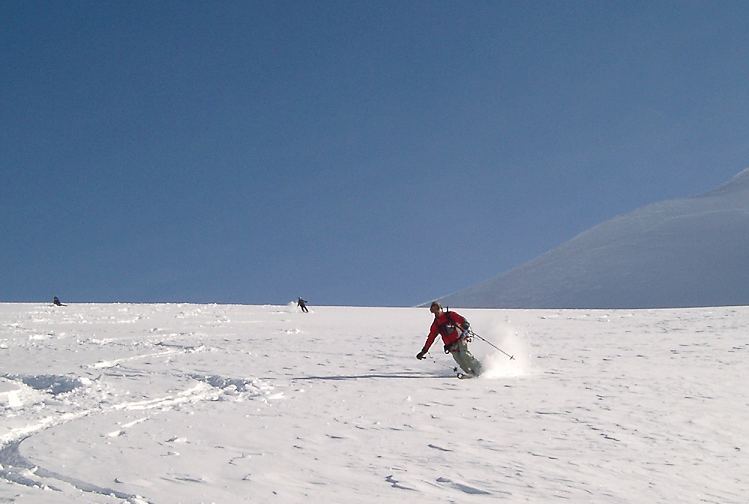 Again Neva passes everyone! Here she rips by Bill.

and I just beat her down to the bottom 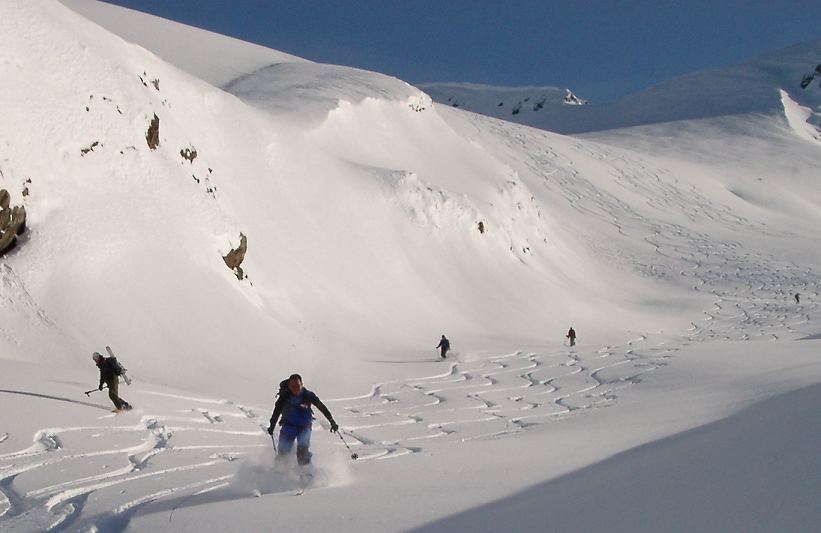 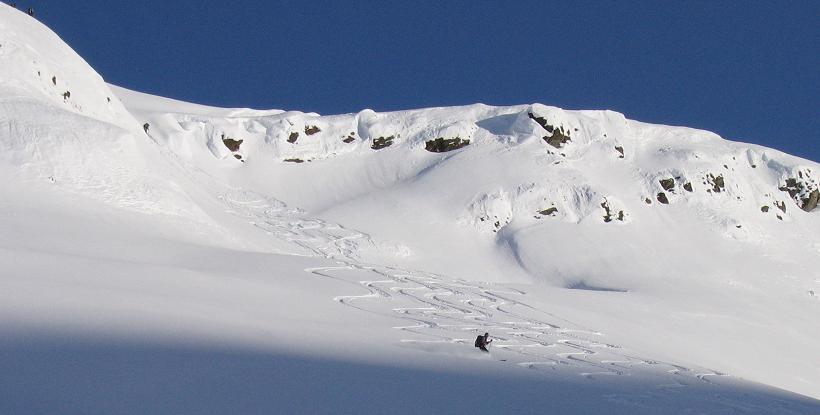 and more dessert of course to top off the day (Bill C, Joel, Bill R from left to right)….wheeeeeeeeeee 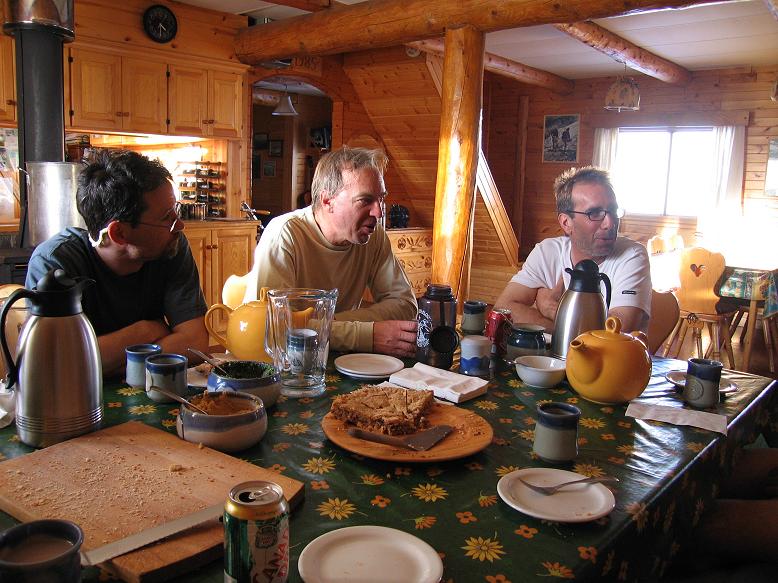 This entry was posted in 2005, ski and tagged Selkirk Mountain Experience, Selkirks, SME. Bookmark the permalink.