Well. We’re back. Despite me wanting to take a break from the Chilcotins it tends to keep drawing you back. This time we’ve come with more people who have become addicted to the alpine – Dave and Trevor. Two of our skiing buddies from Lillooet (Kevin and Chris) joined us as well! Initially we were going to camp at Spruce Lake Wilderness Adventure‘s guest ranch but since there was a bear in the area ripping apart their fridges we figured it would be better to camp in a more populated area.

Fortunately there was still space in the Freiburg Forest Service Campground which was free and right by the lake! So that is were we camped for these three rides. After about a 30 minute drive from the campground we park at the access to Taylor Basin and start to climb. 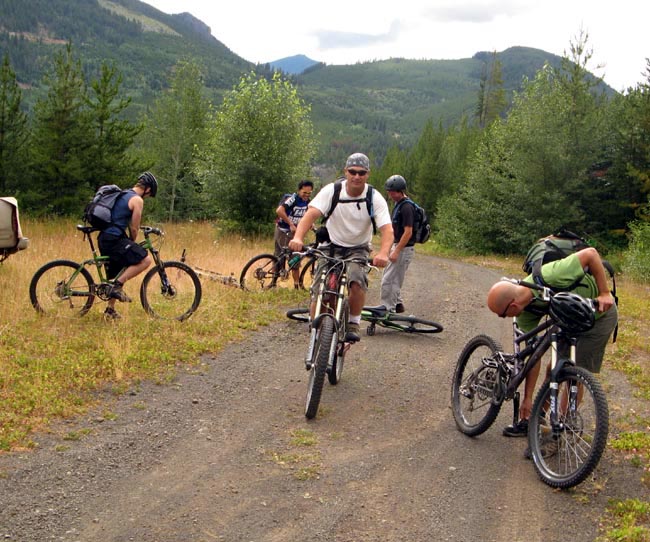 On the climb up we were hit by an unexpected thunder storm. We opted to hide out in the trees to wait for the rain to pass as we knew that at higher elevations tree cover got sparse.

Many other riders came by and rode through the weather. 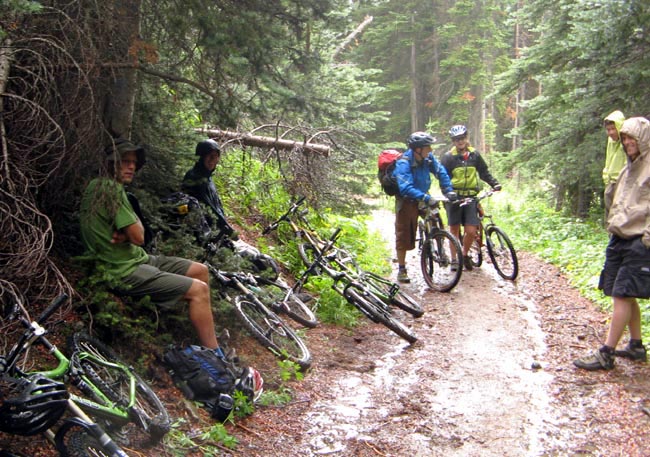 Waiting out a storm

At the rather decrepit Taylor cabin a fire was going for those who had to warm up and dry off from this shower! There were probably 30 riders heading up to Taylor meadows today. We didn’t see a lot of them after the cabin since there are so many options in this area. 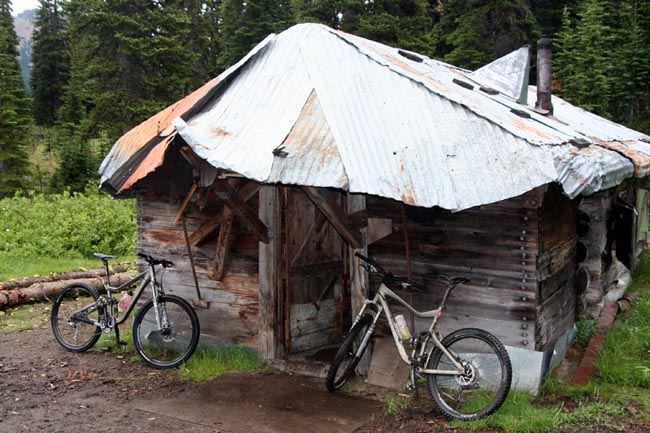 The road in front of the Cabin was a bit soaked. You can see how much it rained. You can also see how cold its been in the area since there is still some snow in them thar hills.

A wee bit wet at the Taylor Cabin

Dave brought his 48lb Rocky Mountain RMX-C for this weekend trip! He may have looked pained on the climb, but he was pretty happy on the descents. Lee brought a real XC bike (a RM Element) so he could climb this final push to Taylor Pass, Trevor was also on a pretty heavy bike (a mere 40 lb Knolly Delerium) and he was able to climb most of the climbs! Must have been the Fox 36 Fork. 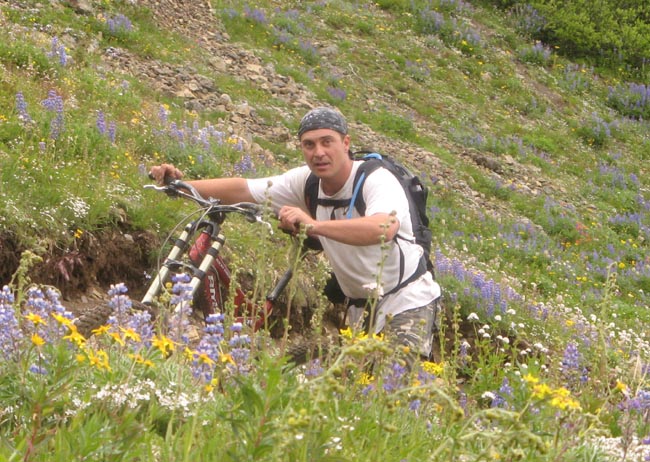 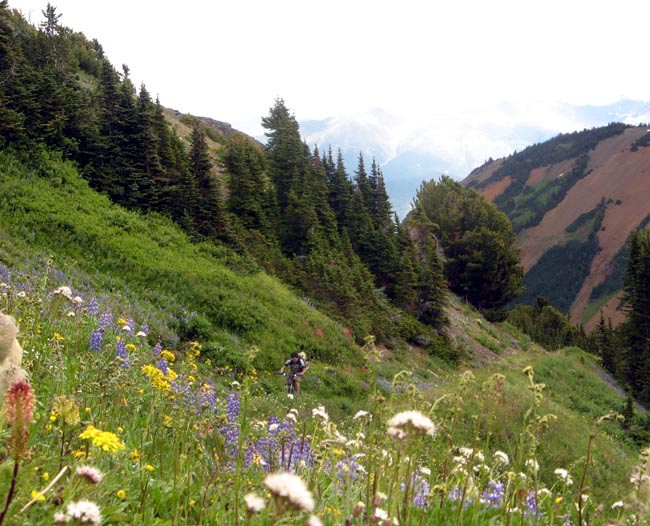 Lee’s choice of the Rocky Mountain Element allowed him to ride this section. 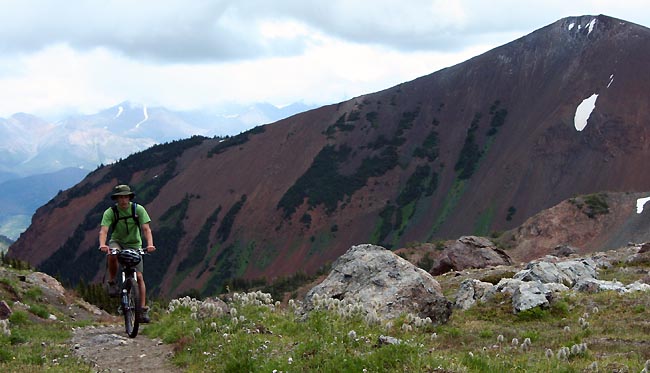 Making our way up to Taylor Pass.

The picture below shows a View of Eldorado Basin into which we rode. The saddle to picture right is Taylor Pass where we came from. 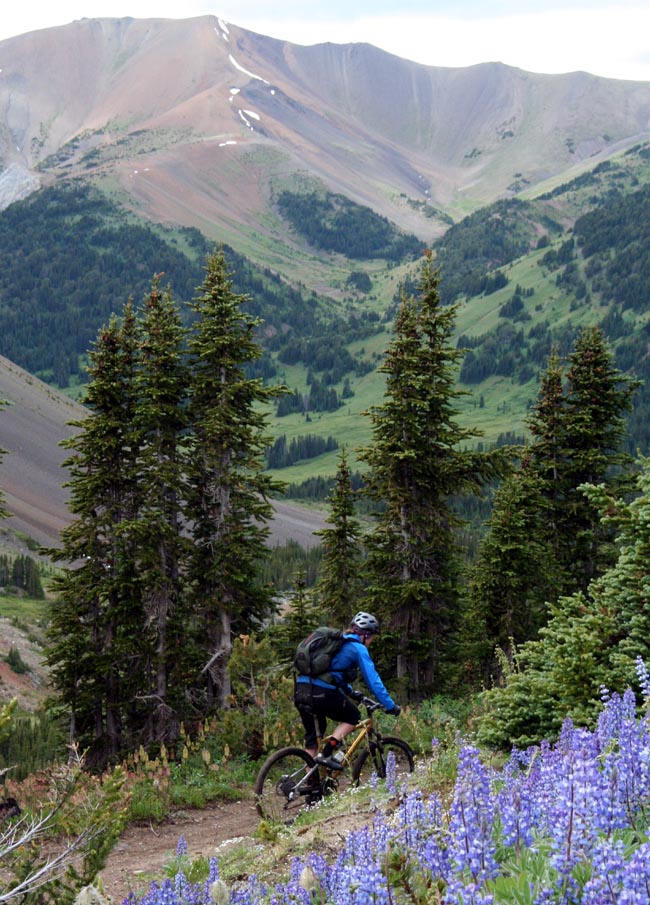 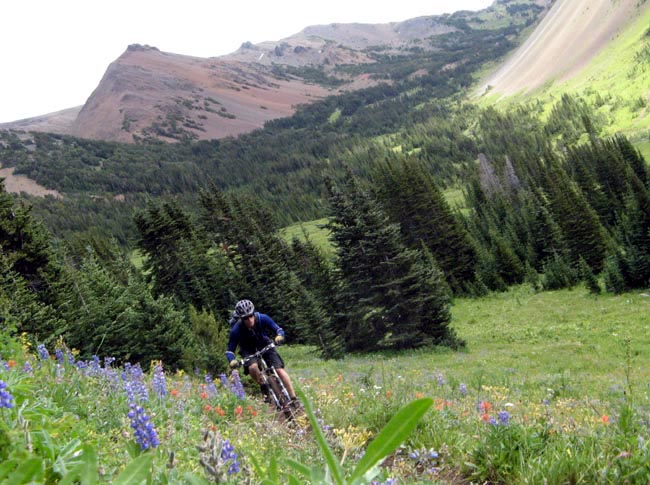 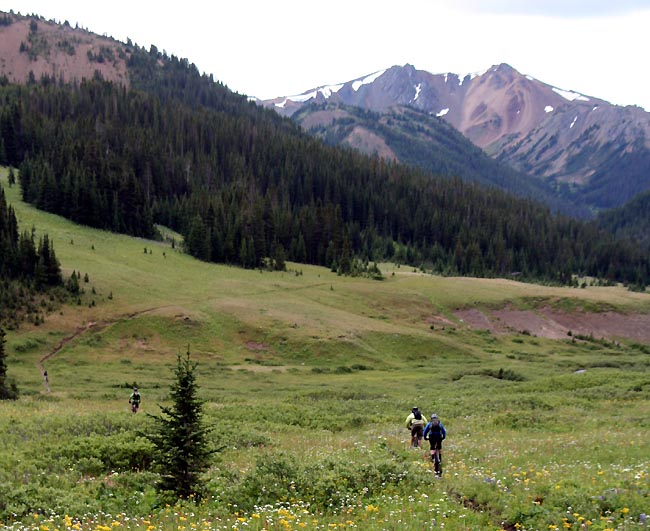 It seems that, in the Chilcotins, whereever there is a down there is also an up, here we are riding out of the meadow to another basin. 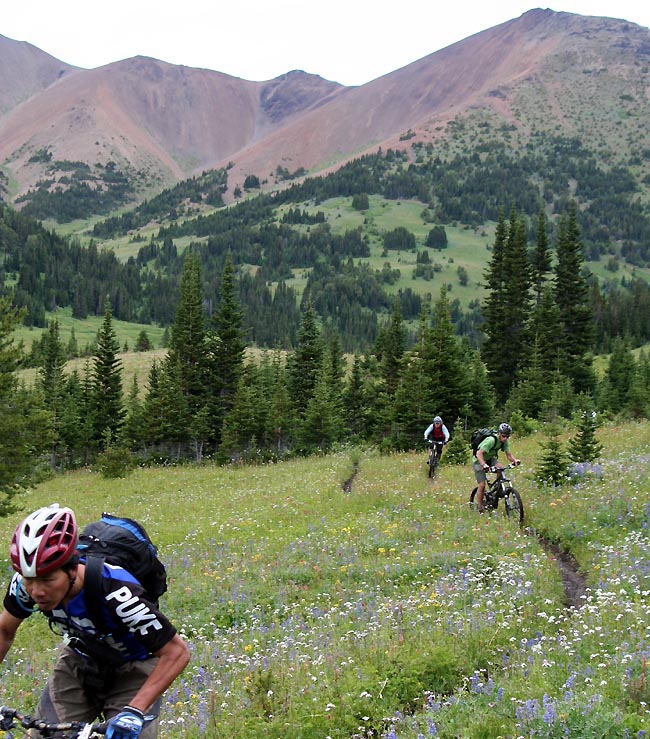 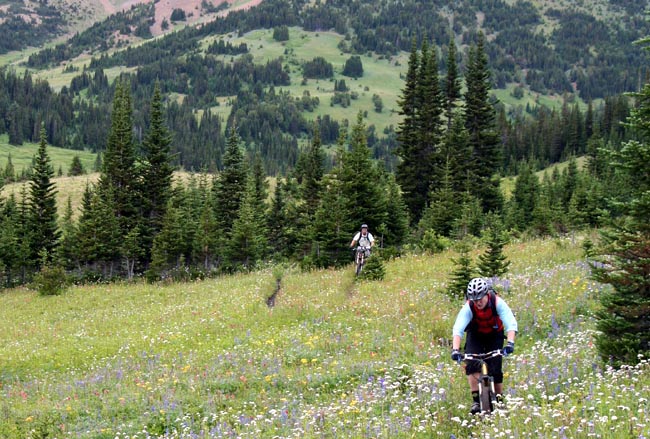 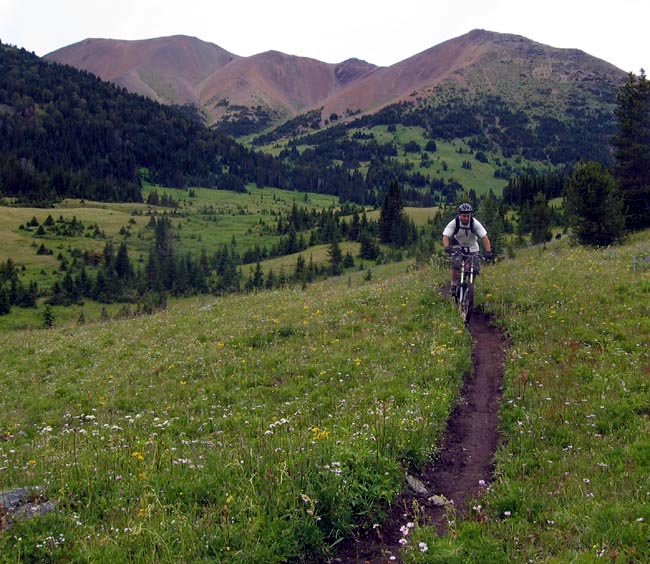 So much single track bound by alpine flowers!

Since these trails are pretty sandy they don’t retain water so despite the rain the trails were not mucky and were actually pretty tacky and fun to ride. 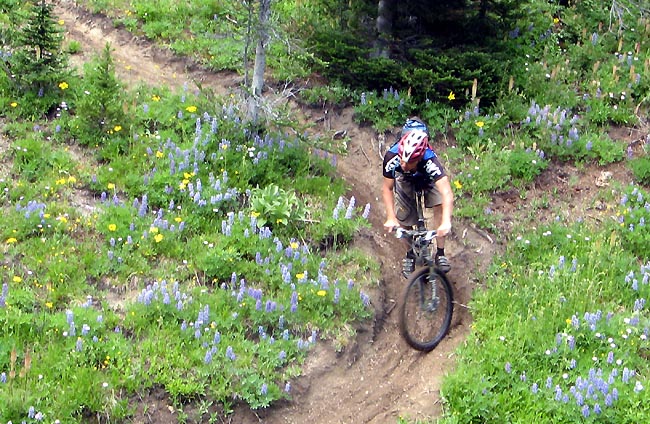 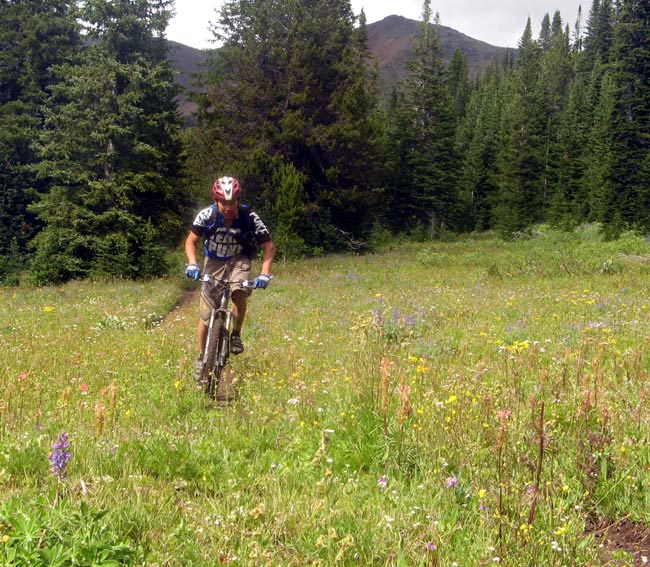 Fortunately what goes up must come down! But then you usually have to climb up again. 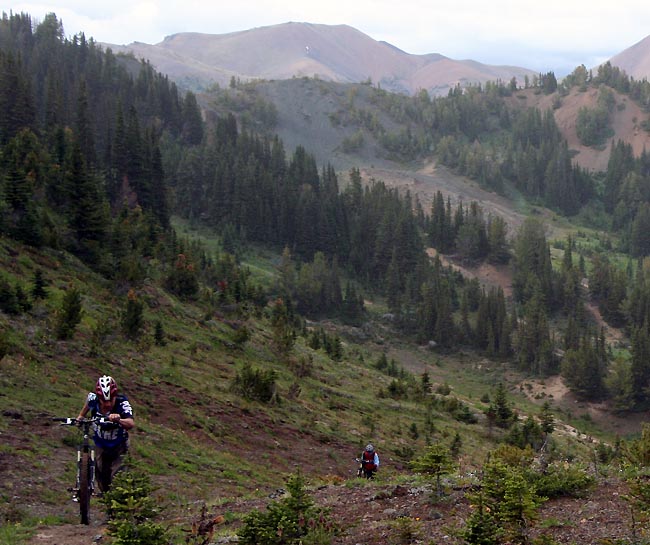 Heading up to Lick Creek

Dave made excellent time with the RMX-C but declined to attribute bib shorts for his climbing prowess! 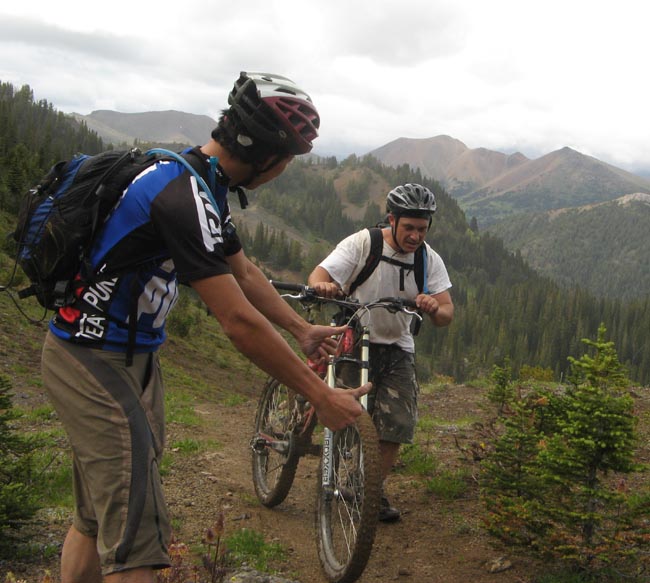 Dave making it on the RMX – C We are now at the top of our final descent. At ~2100m the temps were not bad. We had some food and took in the brake burner that was to come. 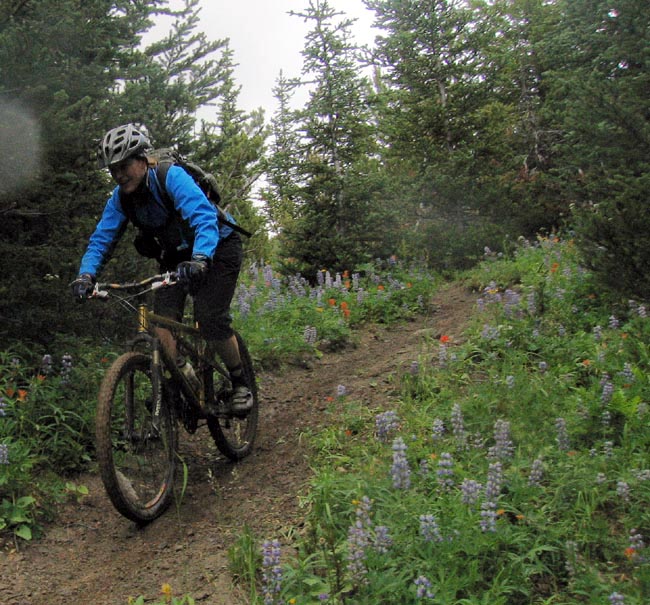 These normally dusty sandy trails were super tacky after the afternoon rain! We finished by spinning back to our campsite on forest roads. 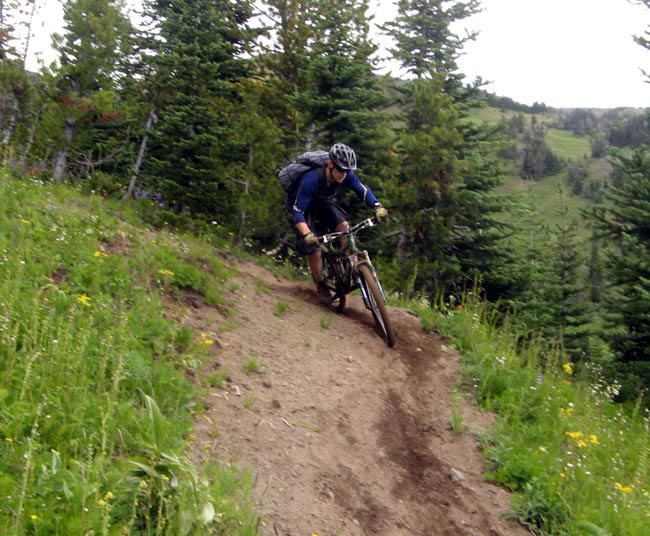 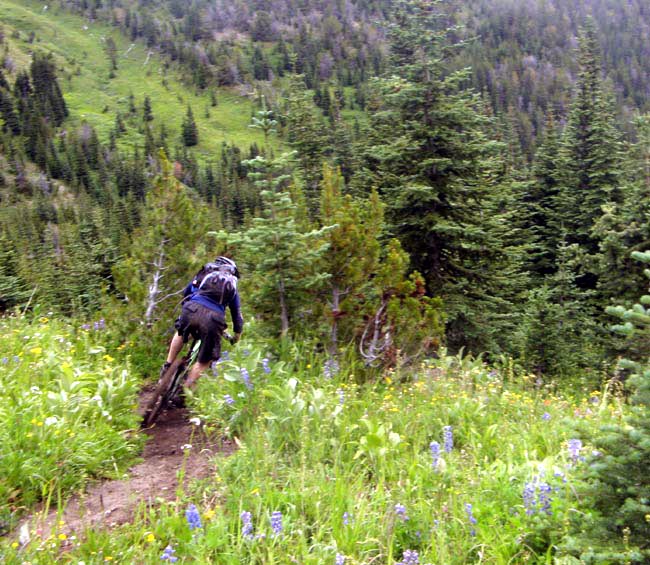 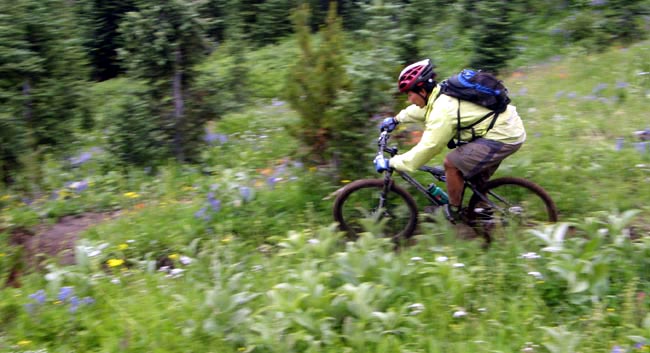 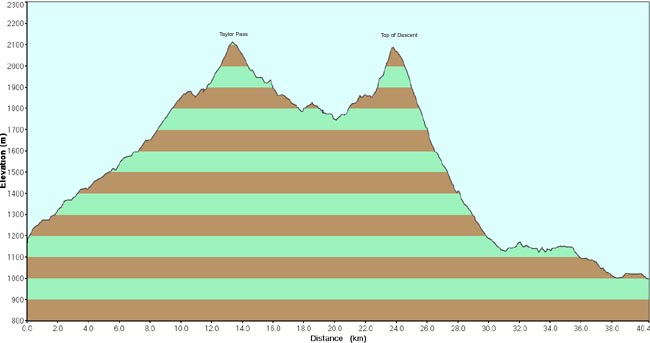