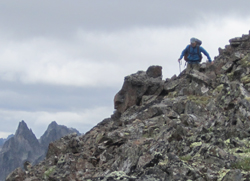 Divide Lake to Grizzly Trail head with detour over Grizzly Trail Ridge. 15km’s, 889m of climbing in 9 hours. Of hiking! Not bad if we were ski touring, but we were pretty impressed with ourselves putting in this mileage walking…

We woke again to drizzling skies. We would have stayed another day if it was sunny, but the gray weather and Grizzly visit pretty much determined our time there was over.

After hanging in the shelter for awhile. 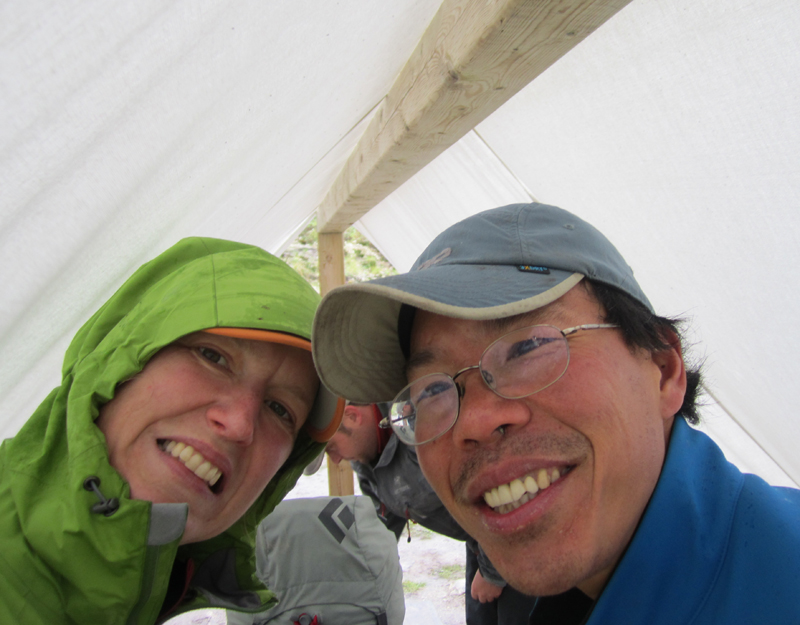 Then under the fly

We figured it was time to head out. 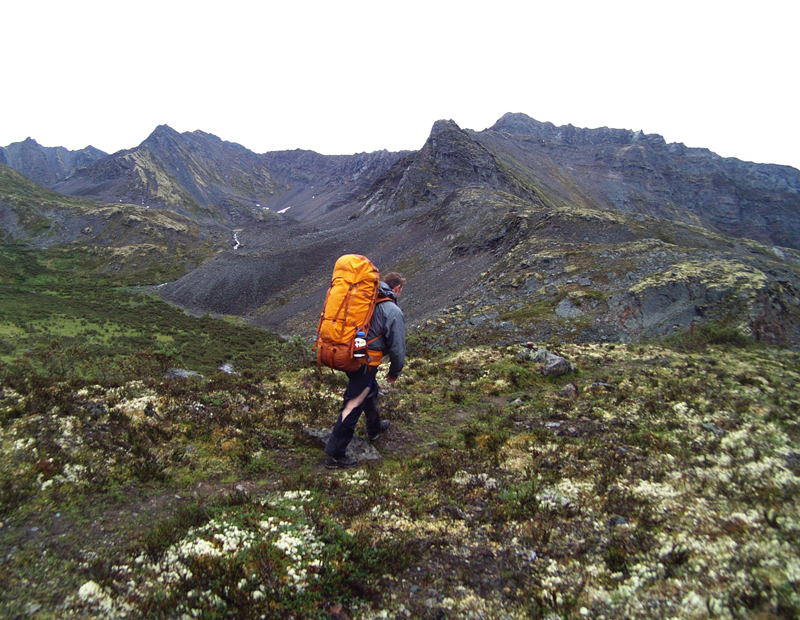 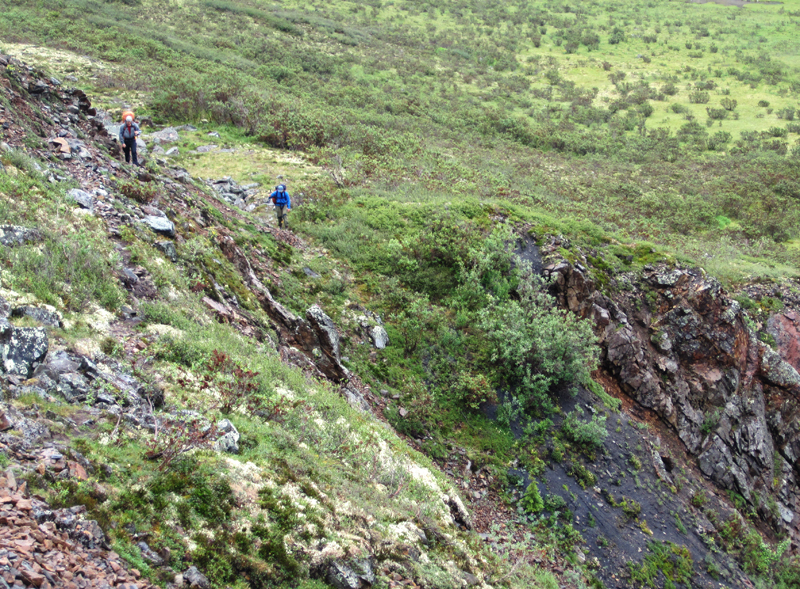 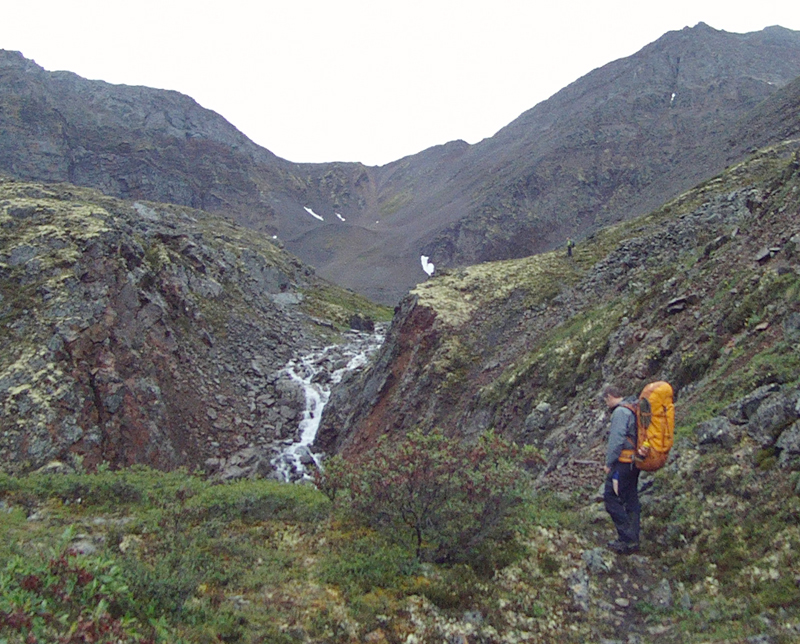 The shale slope of Glissade pass 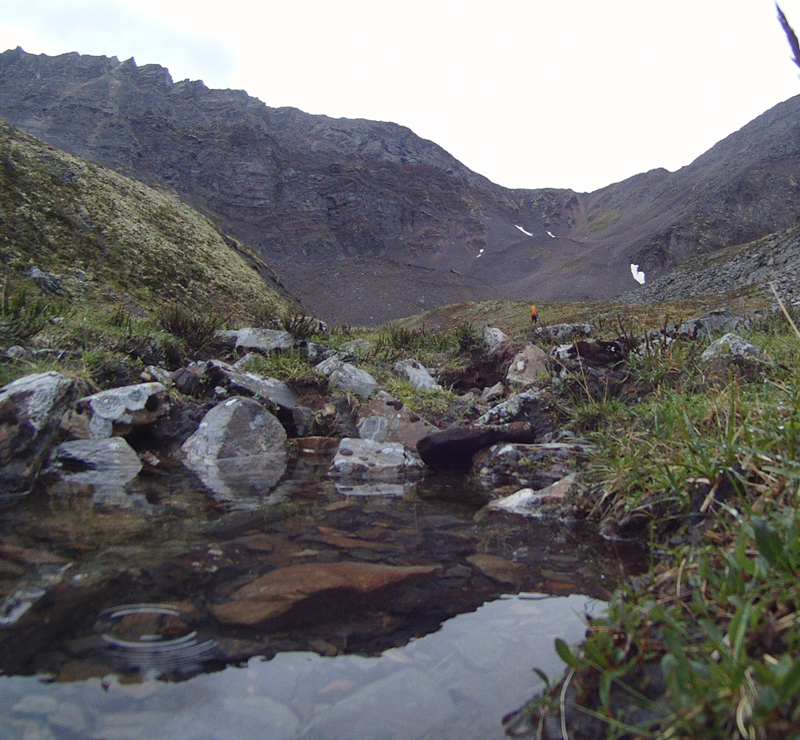 This is very much like boot packing in winter. But not as hard as I thought it would be. It took about the same amount of time to get up this side as up the other side. 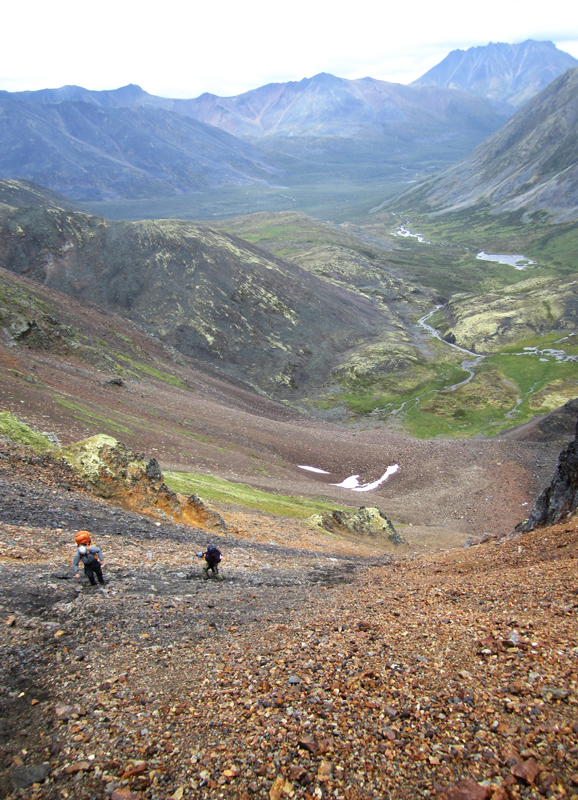 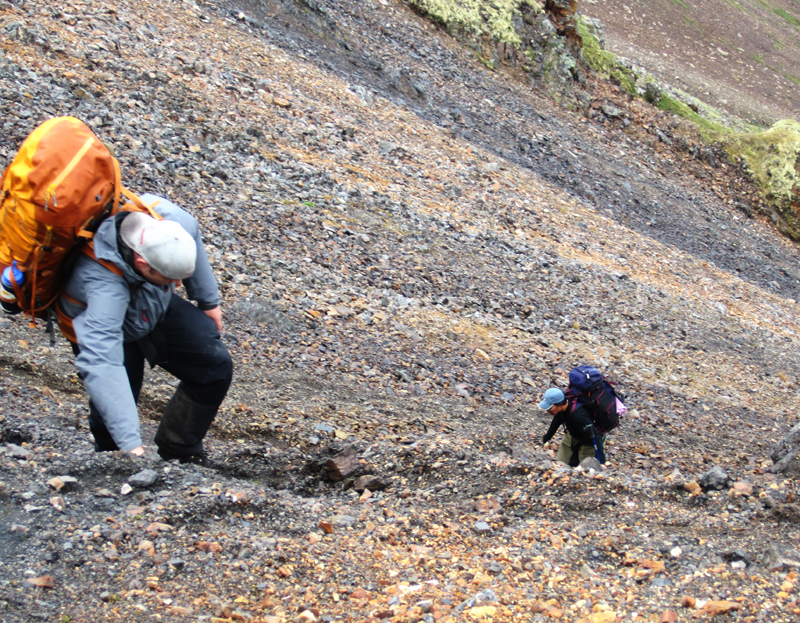 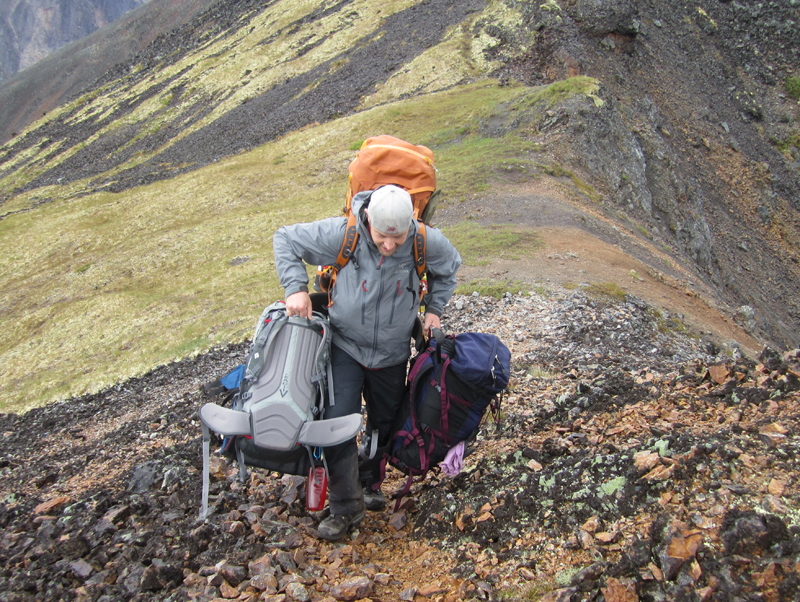 Our last close up view of the Tombstones. Divide lake is straight that a way. 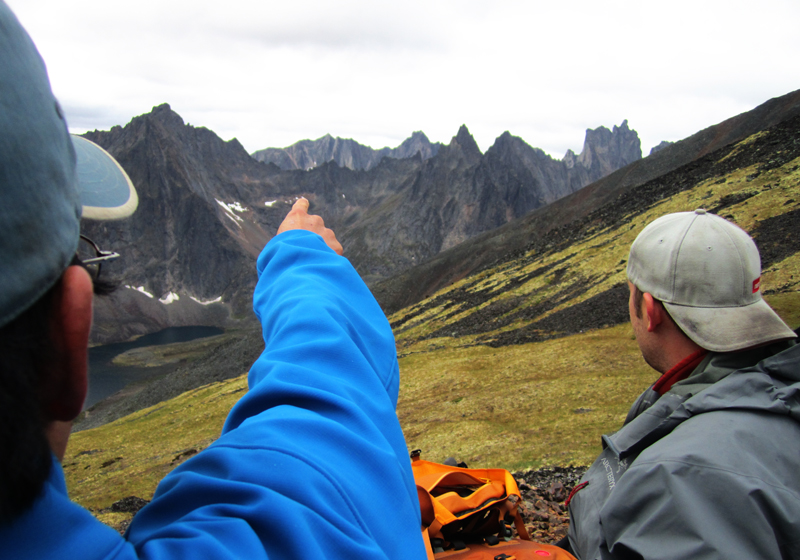 We decide to take the ridge route back as shown on Walters map  instead of down to the trail and out the regular way. Grizzly Lake is below us. 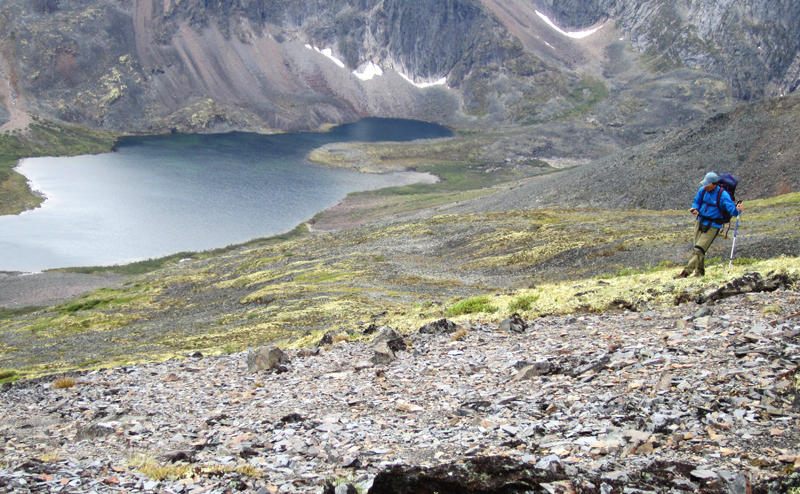 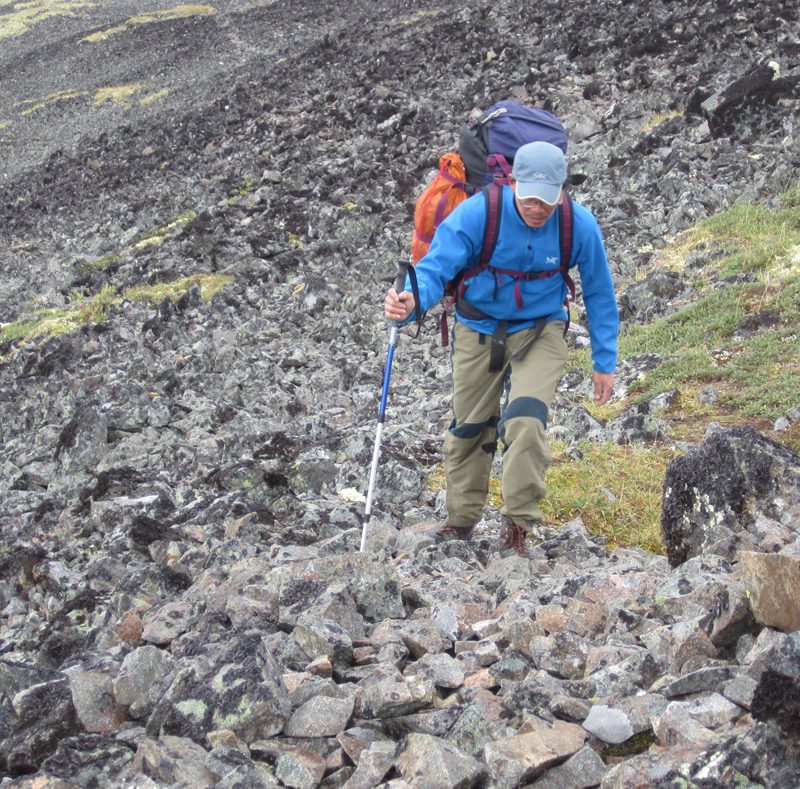 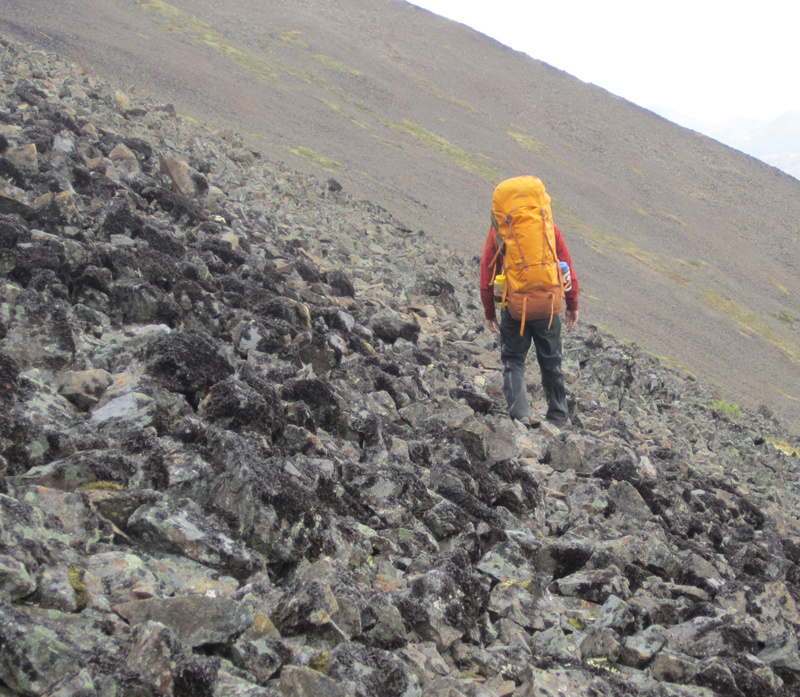 Can you see Lee? 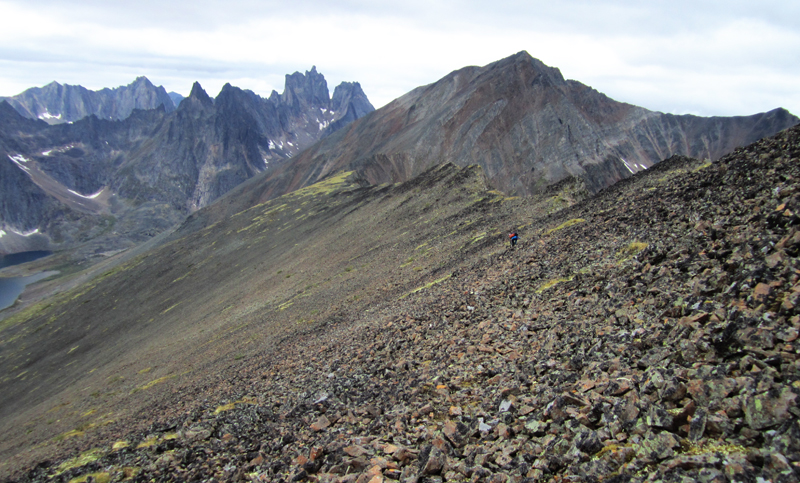 Look at the trail ! 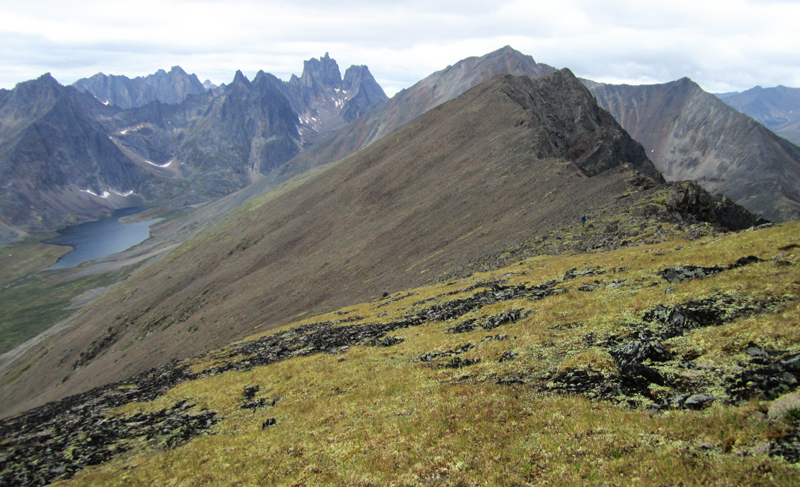 The backside of the ridge was pretty inaccessible. 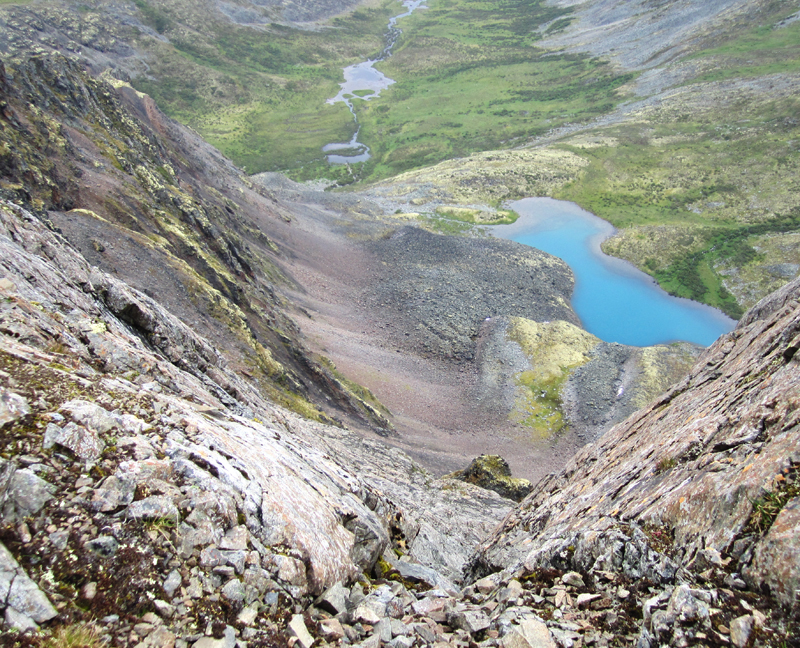 At this point we decided it might be better to drop the 200m to the Grizzly Lake trail. Not that there was a trail we could follow down. 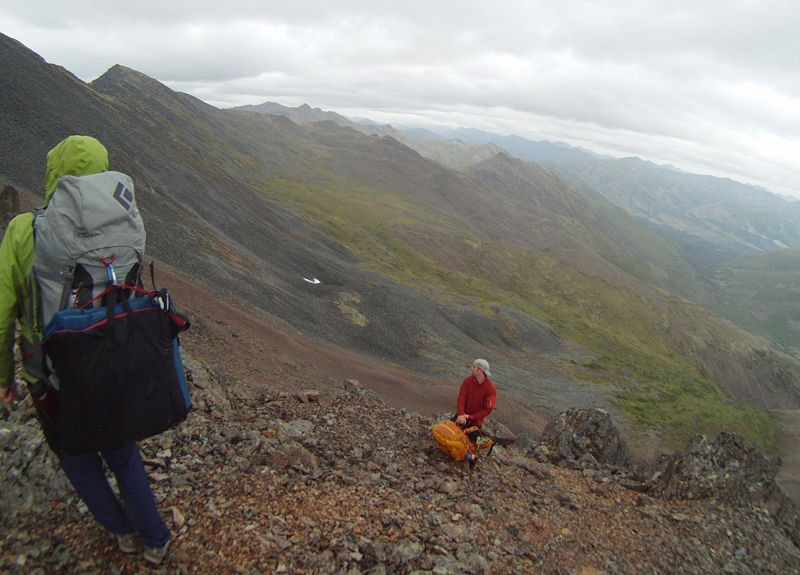 This red rock was quite shaley and not that difficult to descend. The gray rock further on was composed of much larger pieces and would have been more challenging to descend I think. 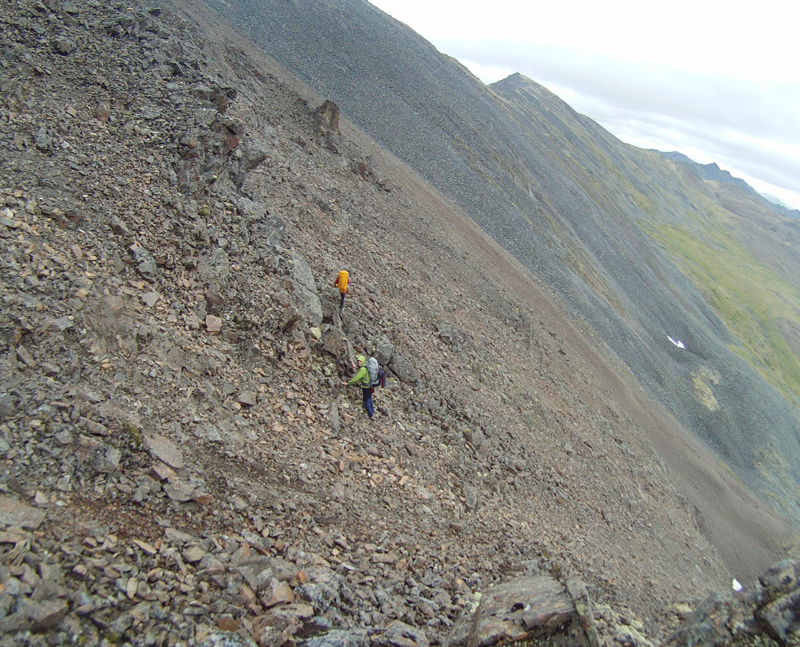 Lee’s lack of depth perception was a bit of an issue. 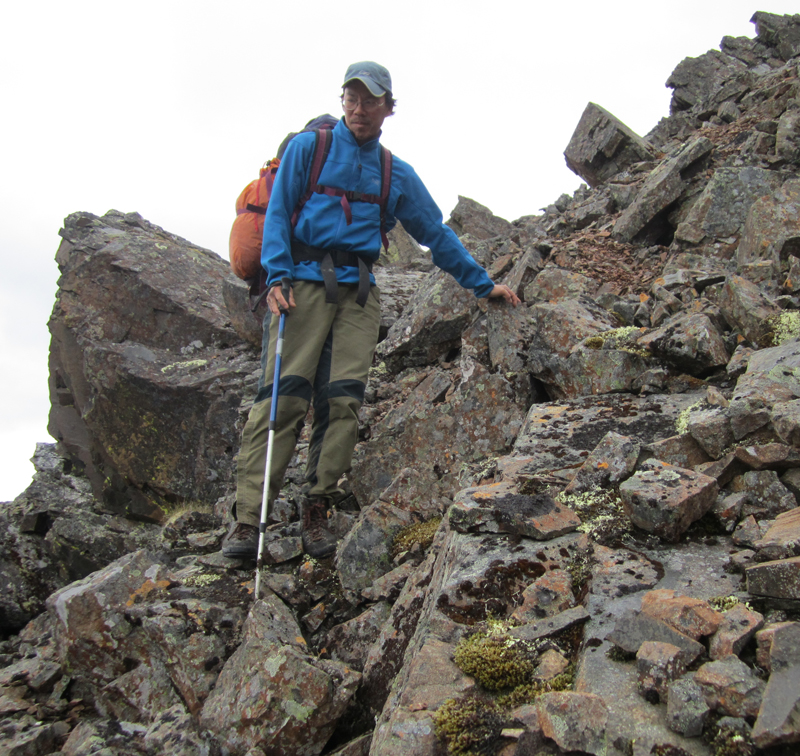 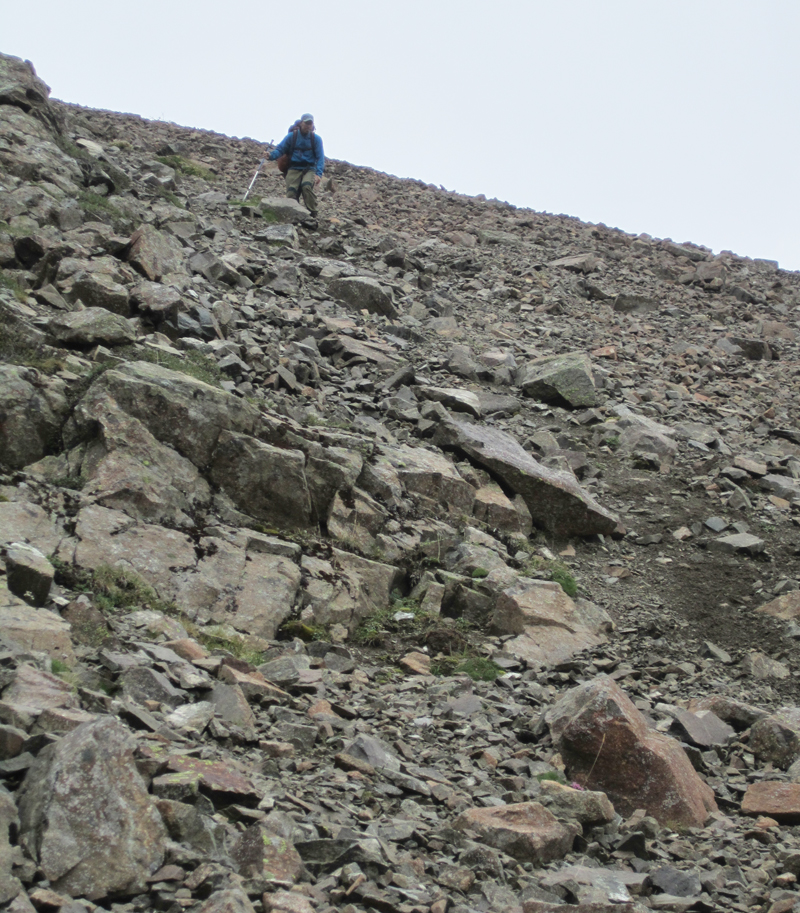 We came down to the picture right of this slope. 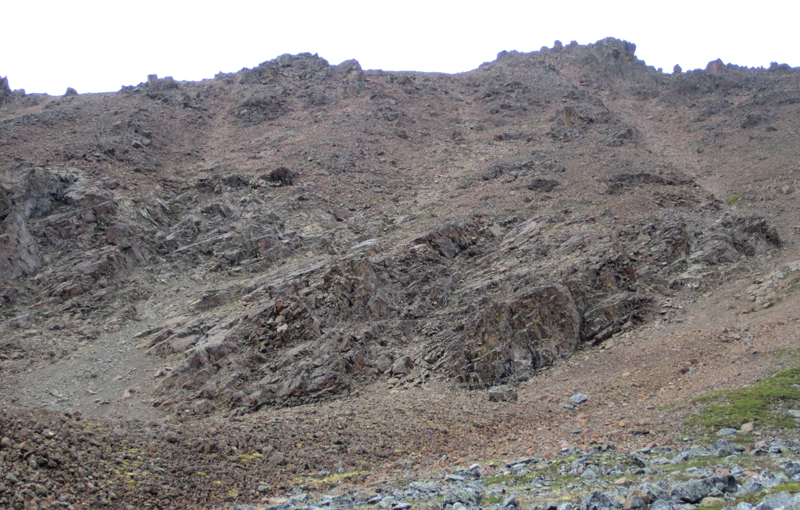 Not sure the exact route, but the less cliffy sections… 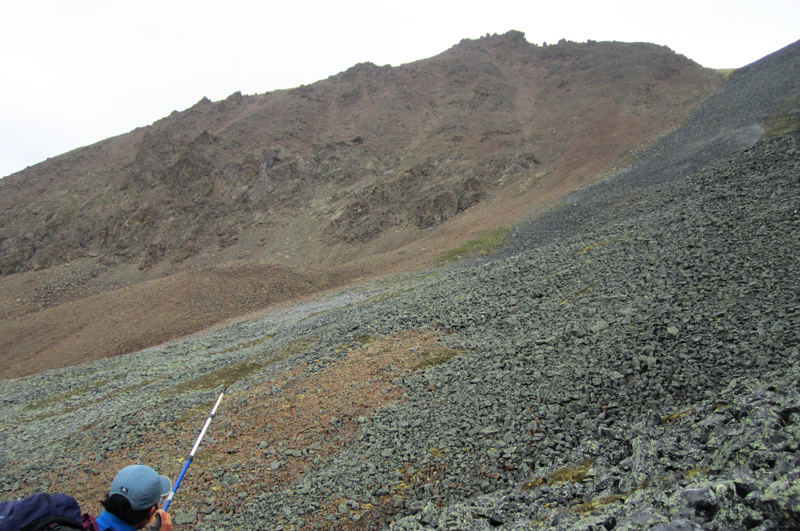 Now we’re back on the Grizzly Lake trail and heading for the car. 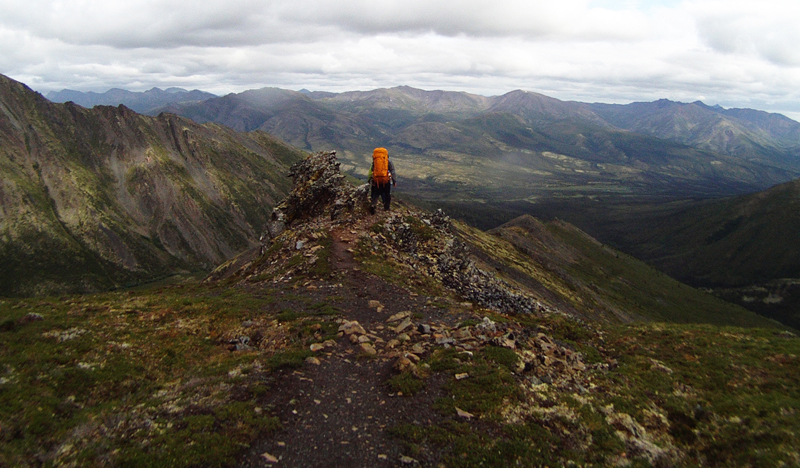 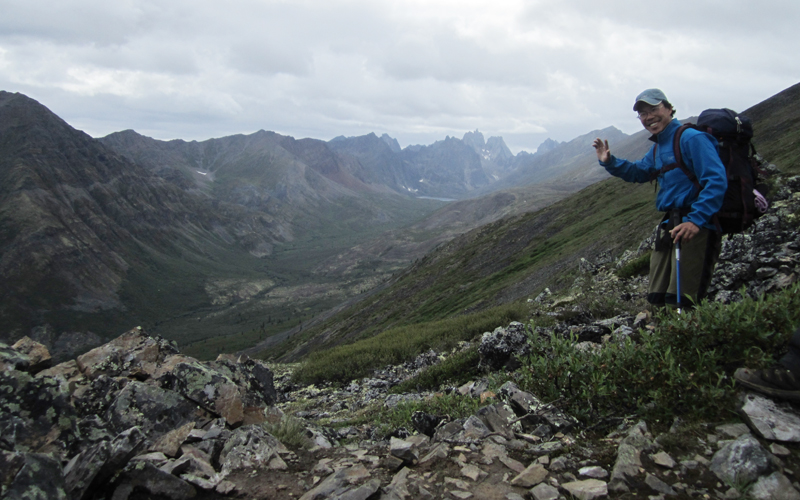 Back at the car. We pitch camp here for the night since we got here so late and had to go to the Interpretive center the next day to return the bear canisters.

We woke up the next day to brilliant blue skies! GO FIGURE! 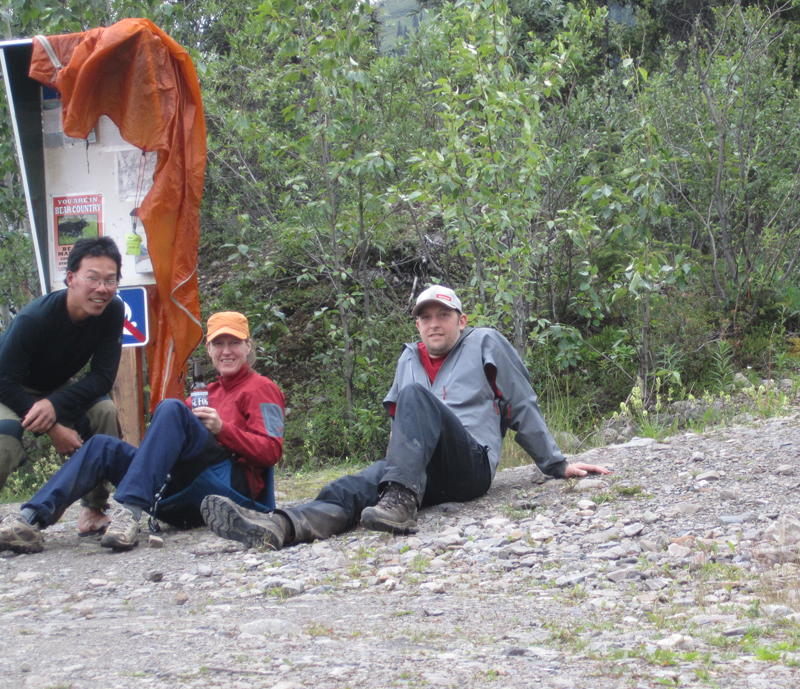 View of the Tombstones from the look out on the Dempster Hwy. 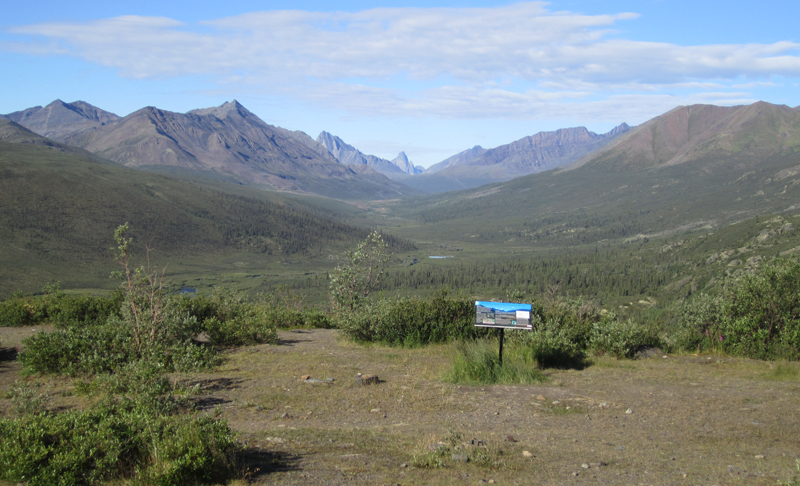 This entry was posted in 2011, Hiking and tagged Divide Lake, Grizzly Lake, Tombstones. Bookmark the permalink.