Two fine trip reports which show the area in better weather are at Clubtread; one by blackfly (Joffre and Matier in one day as a daytrip!) and one by craterburg. Ours took place in a virtual whiteout – unfortunate because I had gone up there partially to ski off the summit but also in large part to scout out the Joffre Couloir and Central Couloir.

The aerial photo below is from Frank Baumann (reproduced with permission) and show the area from air on May 5th, 2006. Australian Couloir can’t be seen from here and is on the back side of Joffre. A trip report from a skier who tomahawked down Central Couloir (and surprisingly lived) is on bivouac and TGR. 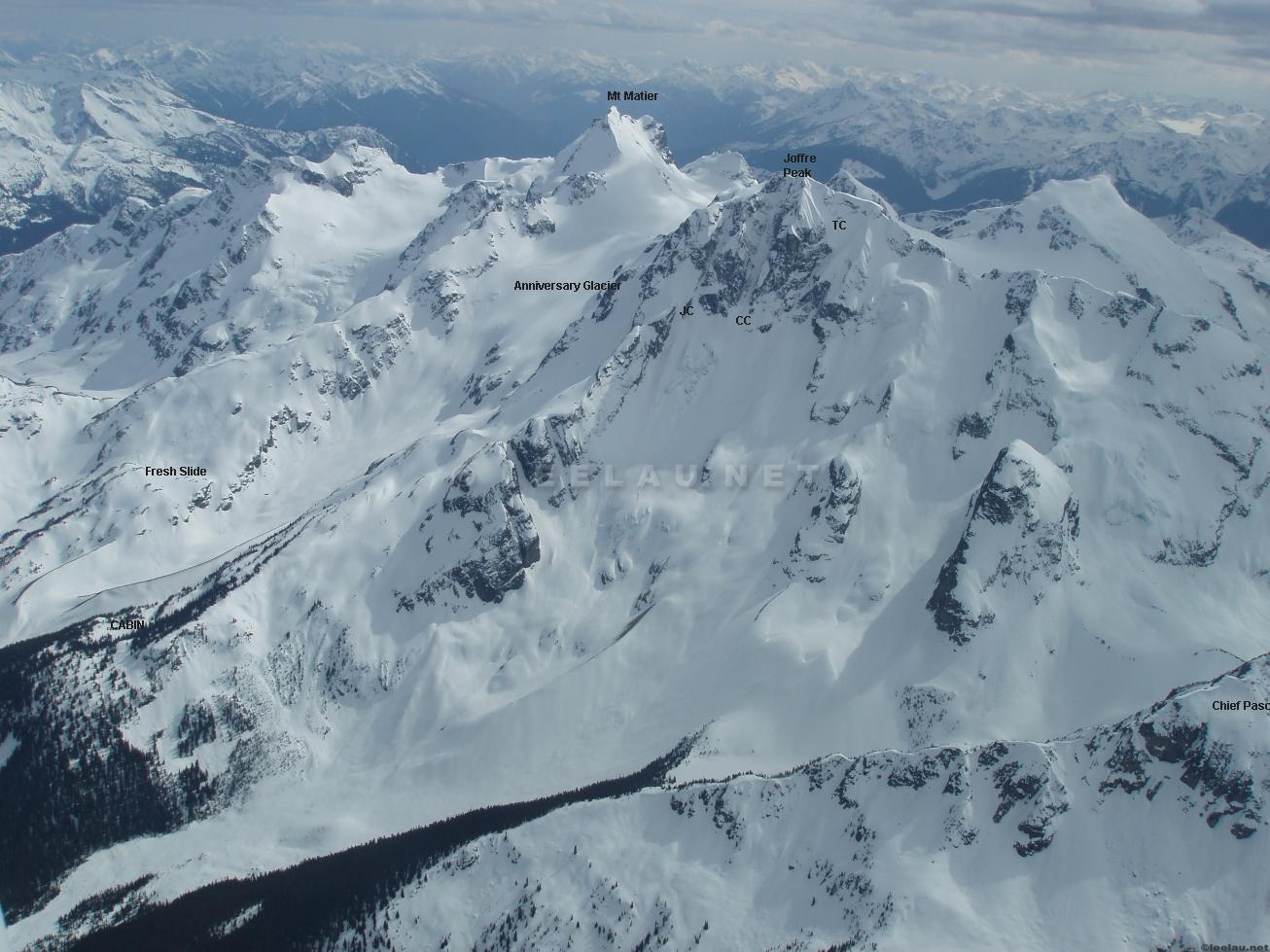 This is the third time I’ve been into the Joffre area this year – the route in is the same. You can avoid most of the Anniversary Glacier by heading up the glacier on climbers right and then gaining the Joffre – Matier Col. The Aussie Couloir is easy to find and faces SW. 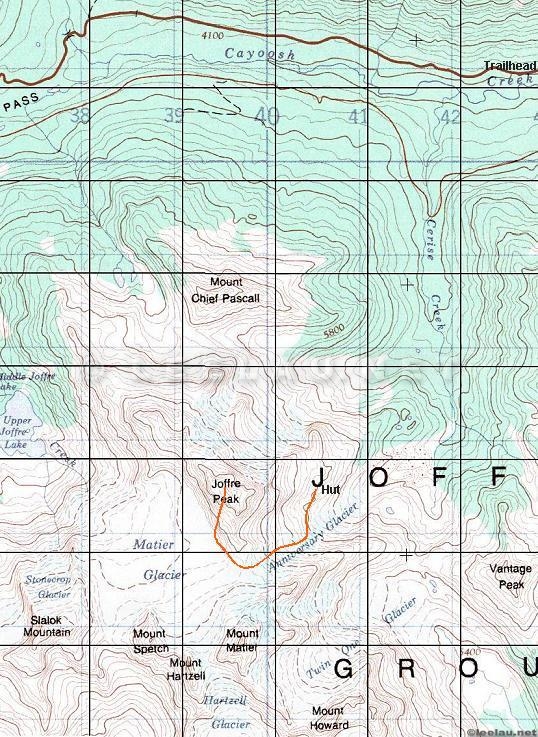 The first km of trail from the parking lot has patchy snow so its a mixture of hiking and patchy skinning. Here is James admiring the scenery on his first visit to this area in winter. 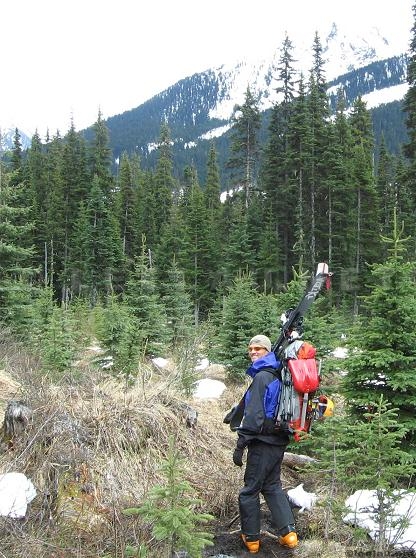 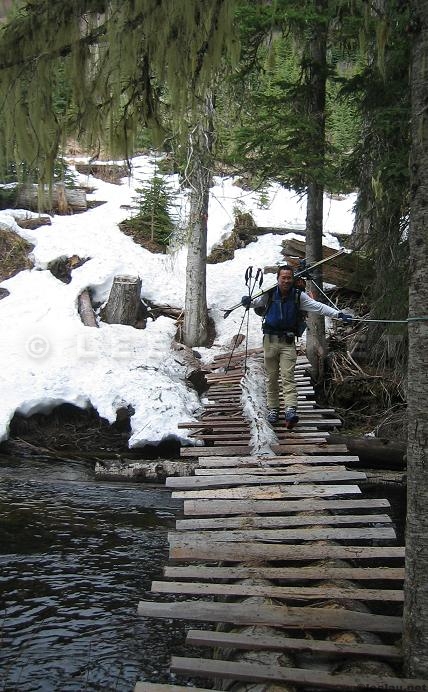 < face=”Arial, Helvetica, sans-serif”>I made James pose for this picture because, prophetically, “this might be the best view of Joffre you get the entire weekend”. 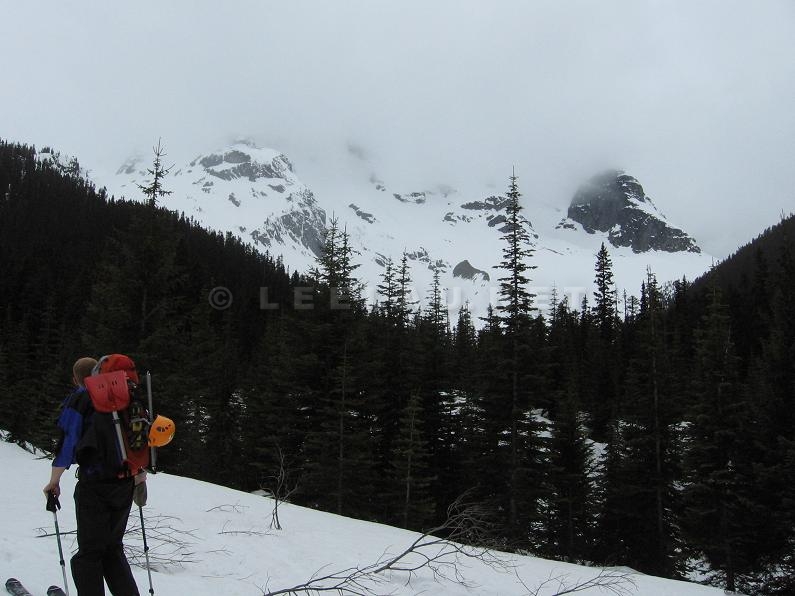 After about 2 hours we’re at the hut – gaining about 300m of elevation over 4 or so kms. 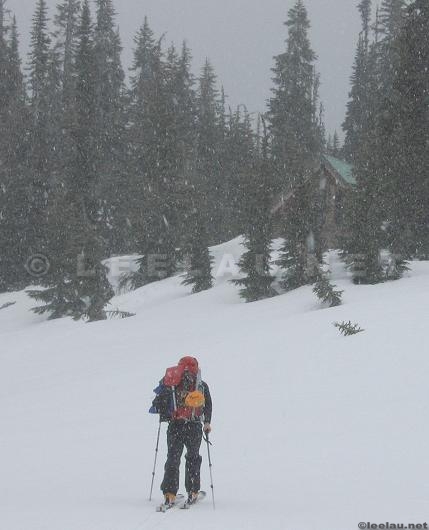 Not a lot of people here today; just us and 4 other people so there’s lots of room and it’s quite comfy. Quite the change from last time when 36 people squeezed in here. The hut’s nice and clean and someone has taken the trouble of removing most of the wine bottles. It was snowing lightly when we got there and continues to snow lightly through the evening. 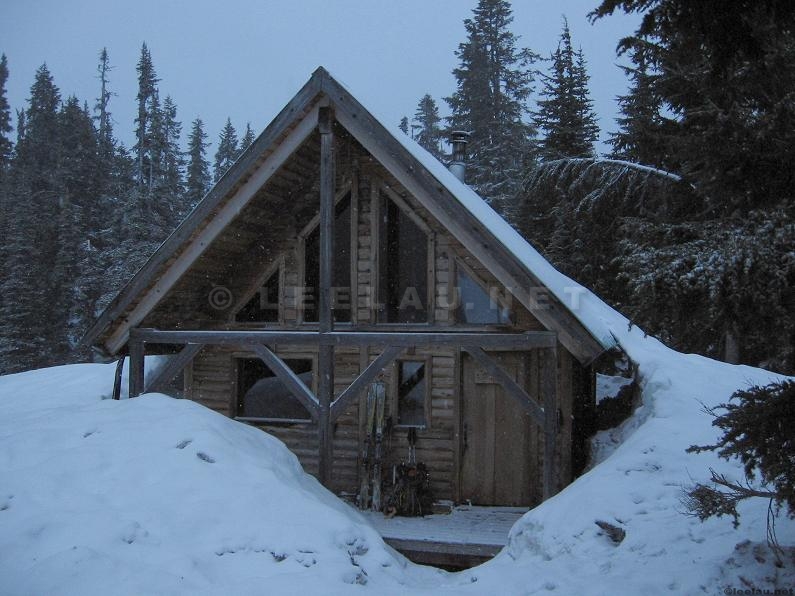 There’s a substantial amount of debris on the snowfields. Looks like most of it is initiated from the rock walls and then travelling a fair distance down to the usual skin track up to to J-M col. The upper Anniversary Glacier has intermittent bits of good skinning snow with bits of melt-freeze crust – it must have been very warm lately.

In this picture I’m trailing a probe so I can check whether or not I am in glacier or whether the debris is just refrozen chunks from wet slides. It’s the latter so we plod on without roping up. 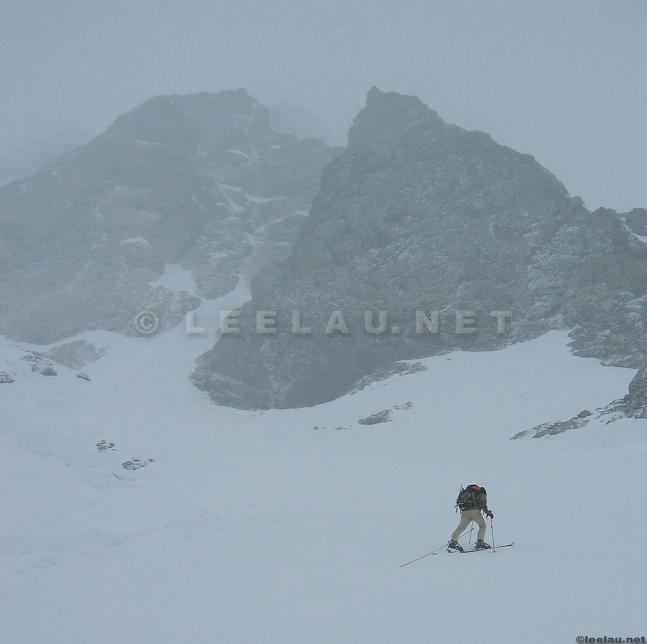 It got a little drafty at the Joffre-Matier Col – pictures would be useless due to white-out. Here’s what Aussie Couloir looks like – the couloir goes up about 400m to the peak of Joffre. 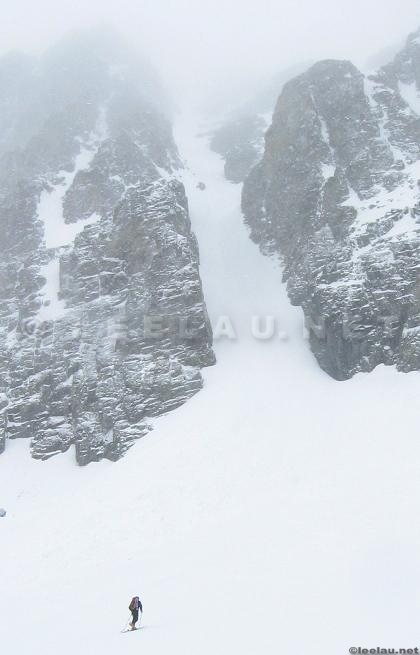 This is what it would look like on a nice day with visibility. 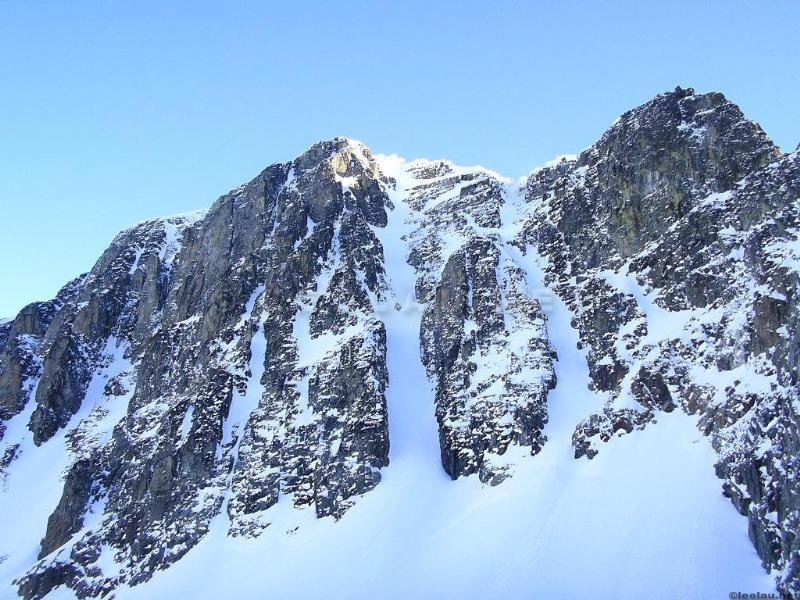 By now its snowing a bit more. The couloir being SW facing (and all other sun-affected slopes I’d imagine) are well and truly cooked but with just a dusting of snow avalanche conditions didn’t appear to be a conditions so we started climbing. James (from Australia) gets to lead. 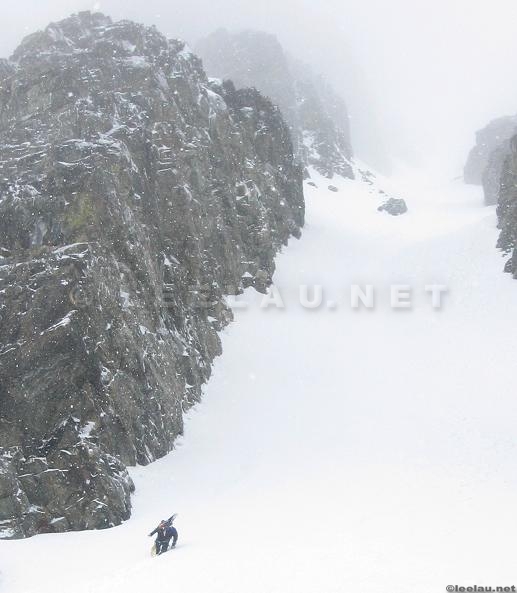 Slope is about 40 degrees – snow is firm and takes crampons very well. Wind transport resulted in about 10 – 15cms in the lower portions of the couloir but about 5-10cms in the upper portions.

Couple of “Hi Mum” pictures before the wind picked up. James on the climb. 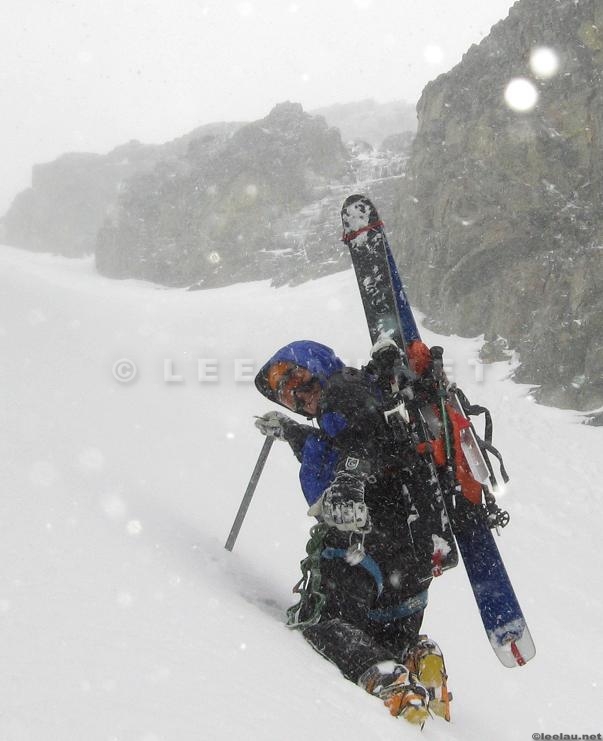 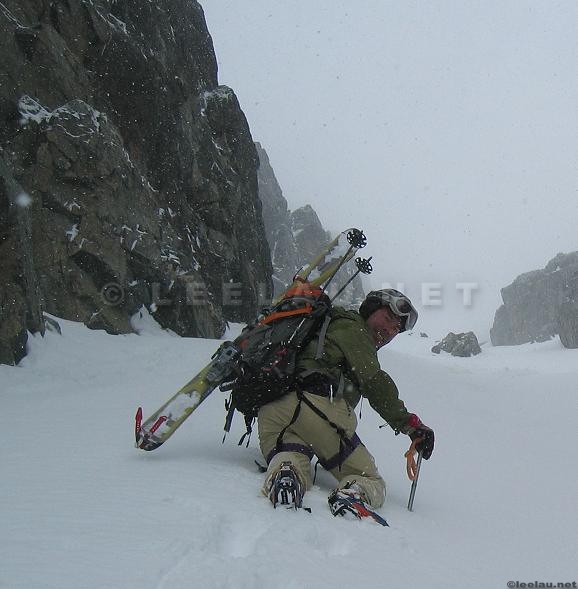 Approaching the peak; the rock walls widen here and bits of sun taunt us with lure of visibility. At this point, I remember the wind hitting so hard that my skis were acting like a sail blowing me to the side of the couloir. 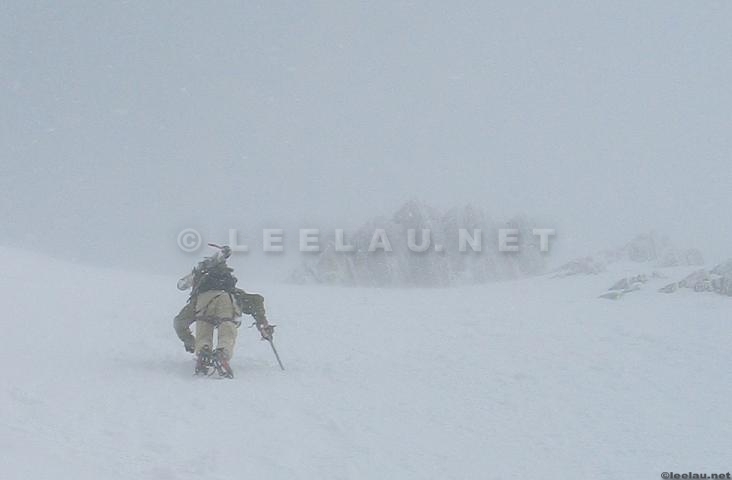 My hopes for taking a look at Joffre Couloir or the Central Couloir are dashed as we are hammered by 60 – 80 kmh winds with gusts to 100 kmh at the peak. We tie off our packs to a picket so they don’t get blown off down the east face then wander over to the peak just so we can say we summited.

Since we didn’t get any pictures worth mentioning, here’s what Joffre Peak would look like if you could see. 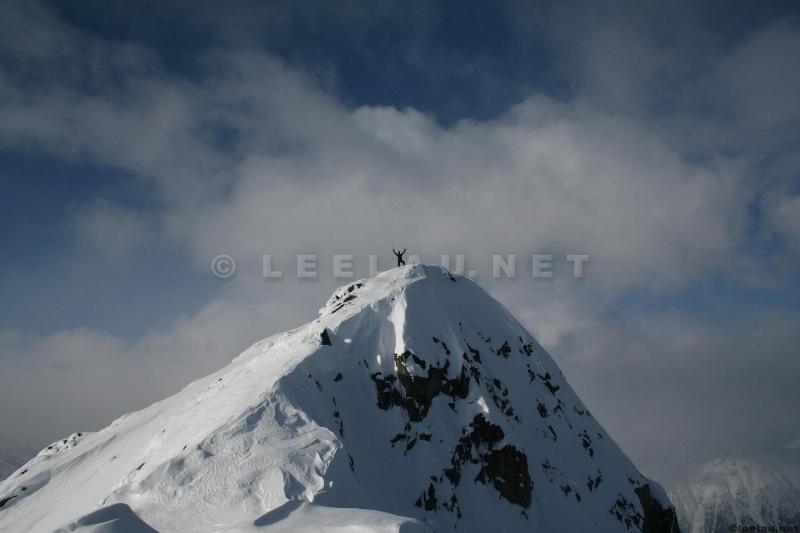 The cornice overhanging Central Couloir is getting huge. I kept getting blown by the wind over to it! This fantastic shot shows the view to Matier and its NW face and to the right – Mt Hartzell and Mt Spetch.

Just when we thought it couldn’t get windier, it picks up a notch as we’re gearing up to go down. Here’s we go 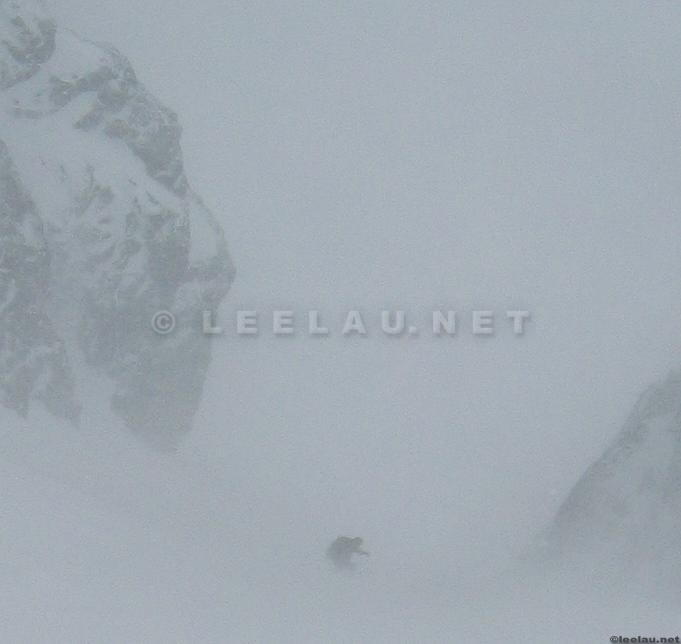 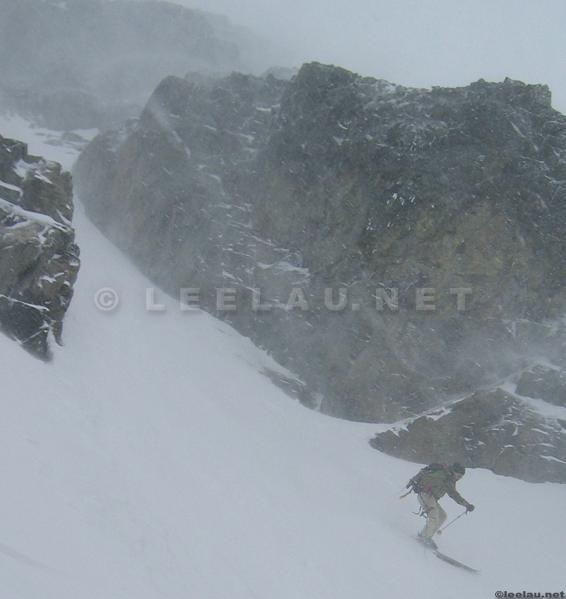 Middle couloir skied by James; maybe 40 degrees. Lots of wet slide debris to try to avoid so you have to make tight turns in a narrow patch of snow to avoid refrozen bombs – rather exciting in whiteout conditions. 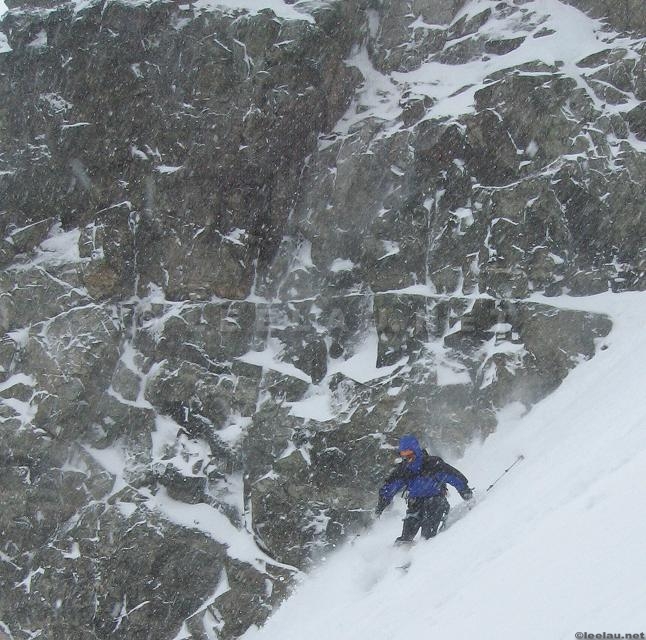 That snow wasn’t bonding terribly well to the m/f layer and to the debris. I was kicking sluff off all over the place. 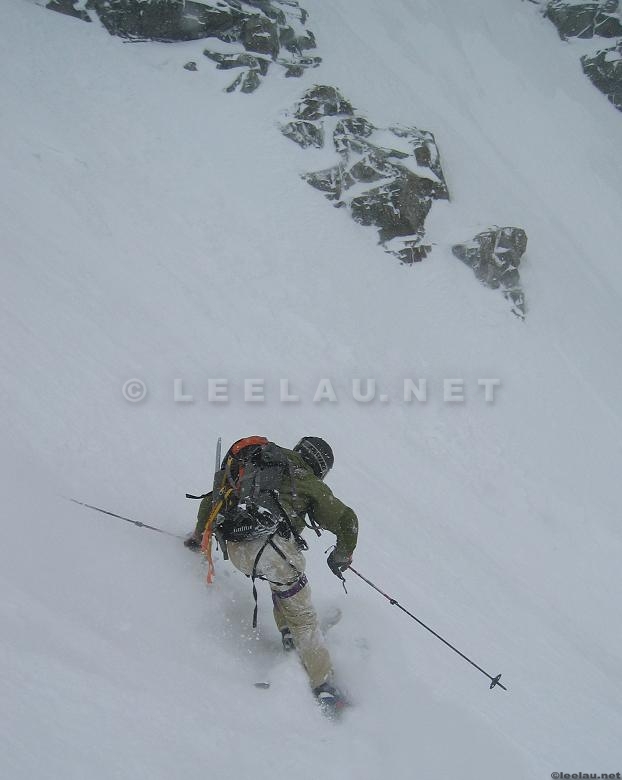 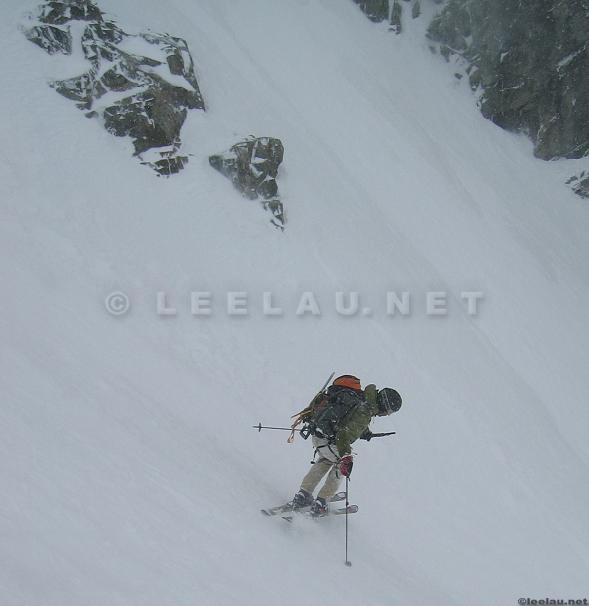 Getting closer to the bottom; our boot-tracks were all covered by new snow. Where’s the strip of powder again? 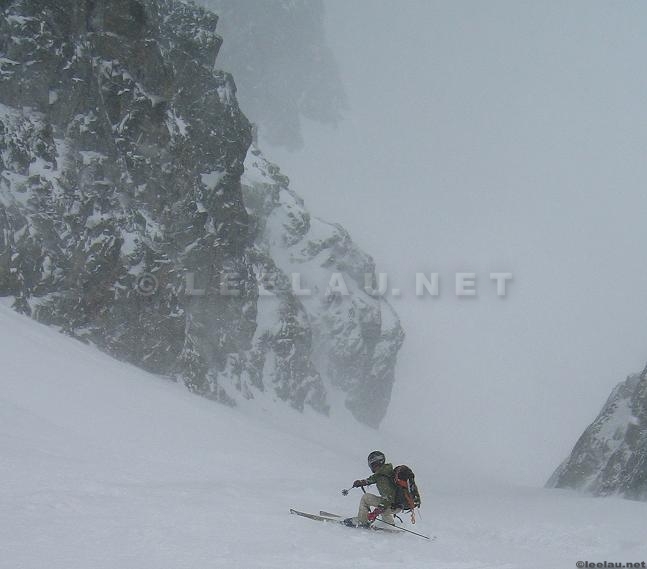 At the bottom I skied out of a very slow moving slide on a low angle slope, luckily where’s there plenty of space to move. Finally we’re done. 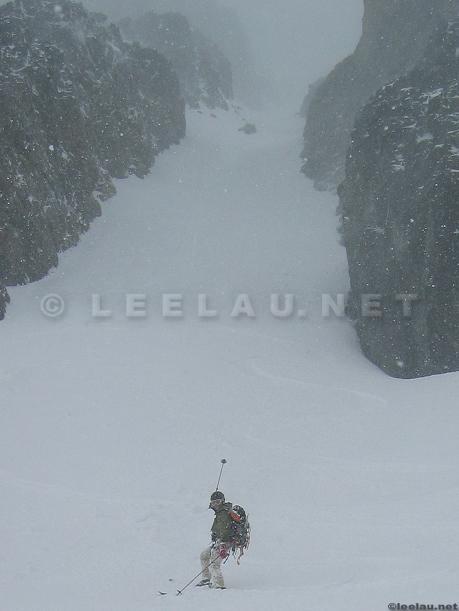 … and I mean we’re done. We decided a while ago not to bother with Matier due to lack of visibility and due to being completely worked by the winds, temps and general fatigue. My hats off to those who bagged both peaks in a day.

Brought all this food, might as well eat it behind the comfort of a wind-shelter 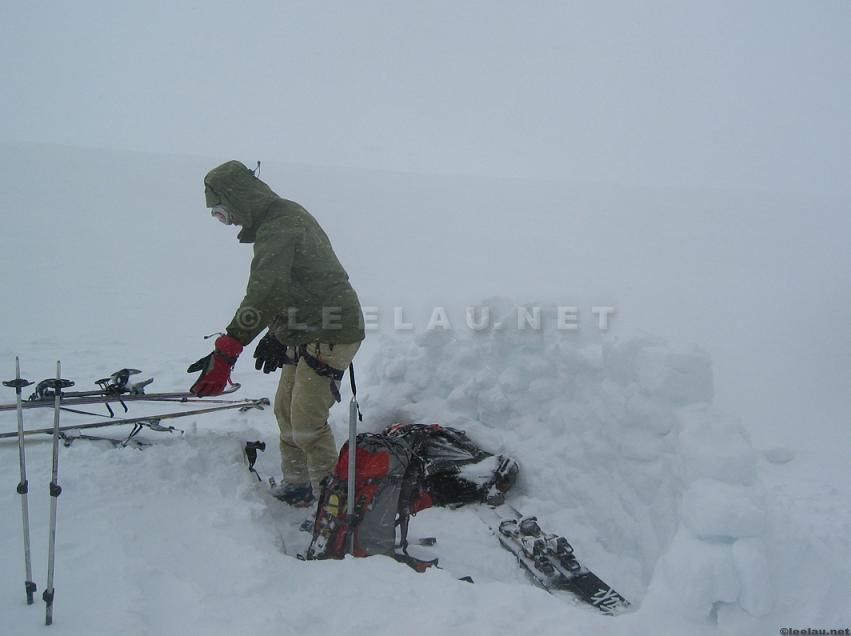 Skiing down from Joffre-Matier col and down the snowfield was nice! All that new snow had covered most of the nasties – the only downside was that sometimes I couldn’t tell whether I was moving or not so technique suffered greatly. We skied down our climbing track as we knew that crevasses wouldn’t be a problem. The only issue we really had with snowbridges the rest of the way getting out was crossing Cerise Creek – don’t trust them! 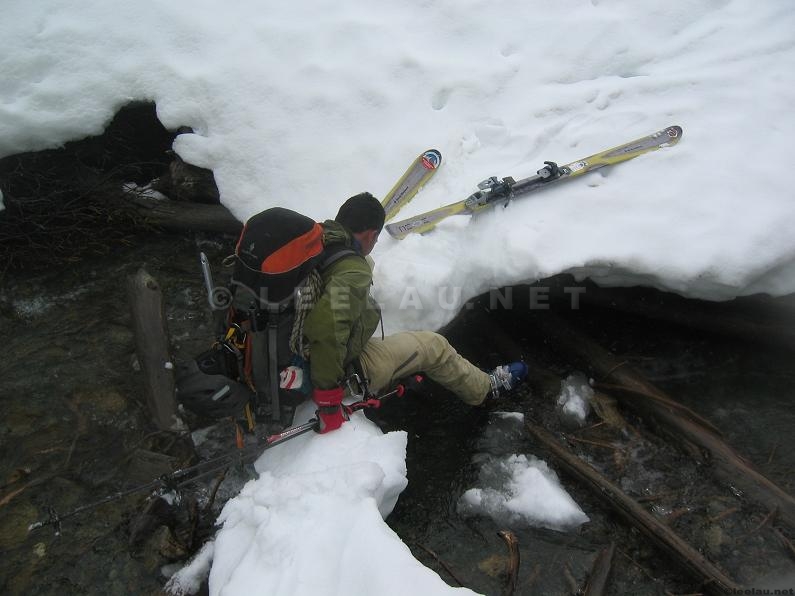 James getting his final base-grind of the year 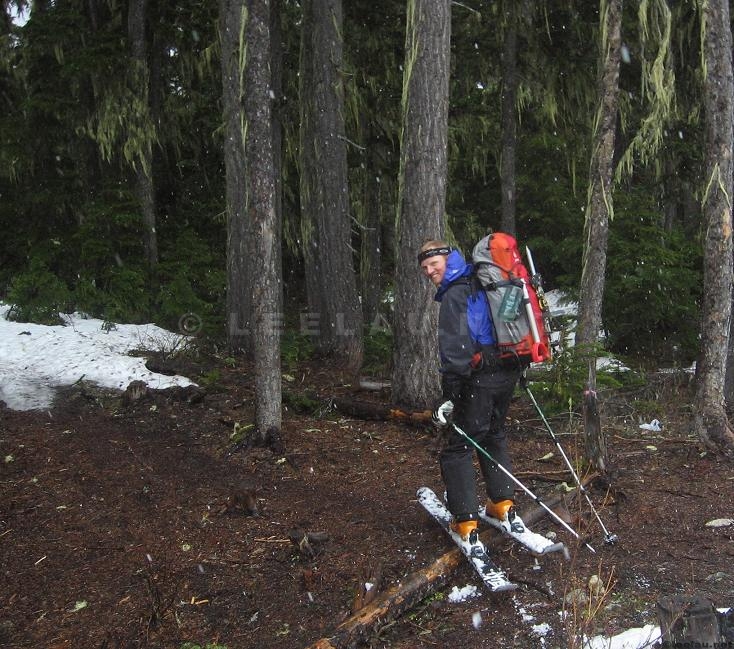 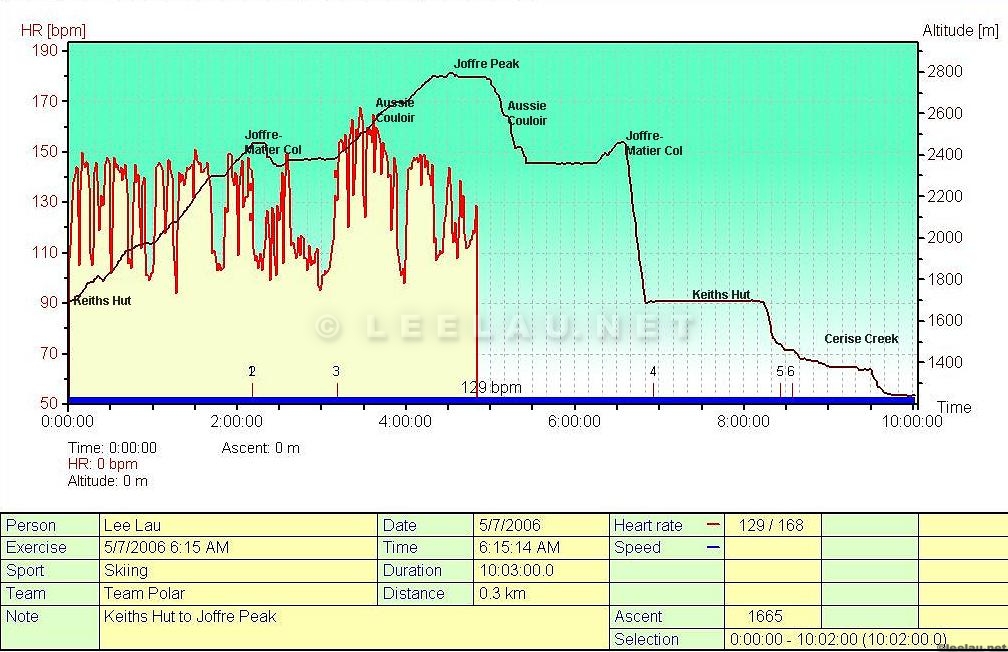 This entry was posted in 2006, ski and tagged Duffey, Joffre. Bookmark the permalink.