Been very windy this year. Any snow this year has been accompanied by wind. On Monday March 5 there was reported N winds in the evening as the low pressure transitioned to high pressure. We thought it would be high-pressure so Adrian, Stu planned to do a mini Spearhead and ski out the Curtain Glacier. I wanted to investigate an exit via Adit Lakes which would be new terrain for me

Unfortunately it was graybird most of the day. Snow was pretty decent with easy travelling but windslab was a factor. There was windslab on the Decker approach. We took the low Decker – Trorey col which also had some w/s (20 – 10cms) on the ski entry to the Trorey Glacier. Inversion is in full effect. Minus 7 in valley and minus 1 at Decker shoulder so warming is also a bit of a concern. The windslab was a concern only in the first 20m or so of the route down Decker-Trorey then quite a bit less present on the Trorey Gl proper.

Route then was to Pattison. We poked a bit higher to take a look at NW Pattison which also looked quite slabby. Not wishing to roll dice we skied off SE Pattison to the Tremor Glacier then took the usual Spearhead route then to MacBeth col -Curtain Glacier. Tons of rime and wind effect on all aspects (probably that N wind at the tail end of last weekend’s storm). Skipped Macbeth Pk to Stu’s chagrin as I didn’t feel the need to climb 100m of windslab.

Ski down Curtain Glacier was pretty good. Some mild slab but it’s pretty protected with snow quality improving as you get lower as the temps actually dropped. Slots are well covered although still not as filled in as in 09’s record year (so maybe avoid the central Curtain Glacier direct). Lots of solar effect on the bottom bit of the Platform Glacier fyi. Winds at MacBeth Col were medium fyi (SW at approx 20 – 30).

Fitz Creek at 1400m or so is quite covered so after some routefinding we punched through to the bowls below Russet Lake and began the laborious climb up to Russet Ridge then to Cowboy Ridge. Some had neglected to bring headlamps so we teamed up with Alex, Jeff, Vince and Graeme and the people with headlamps lit the way for those without. Props to Adrian for the first split-ski descent of Singing Pass headlamp-less. 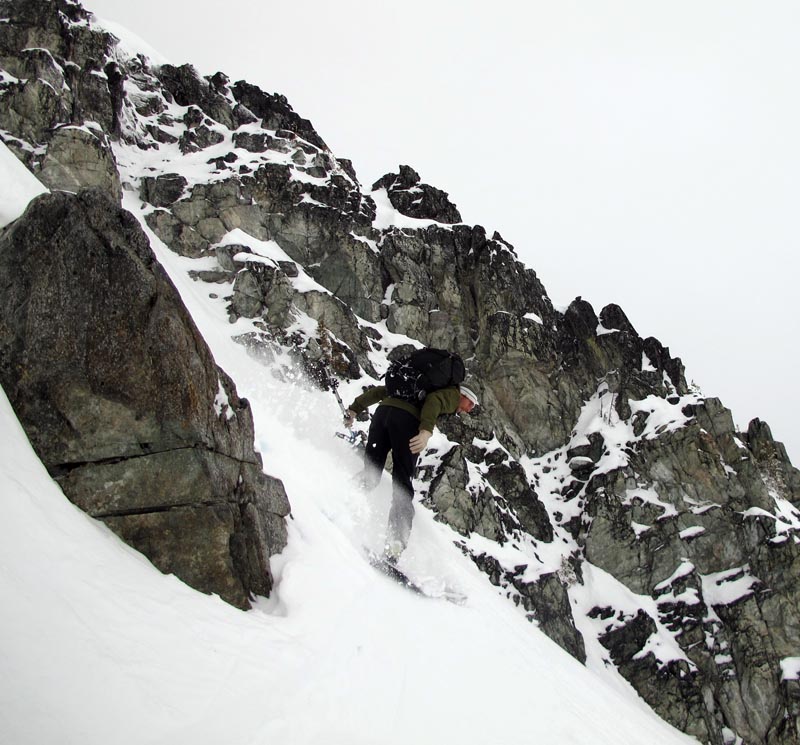 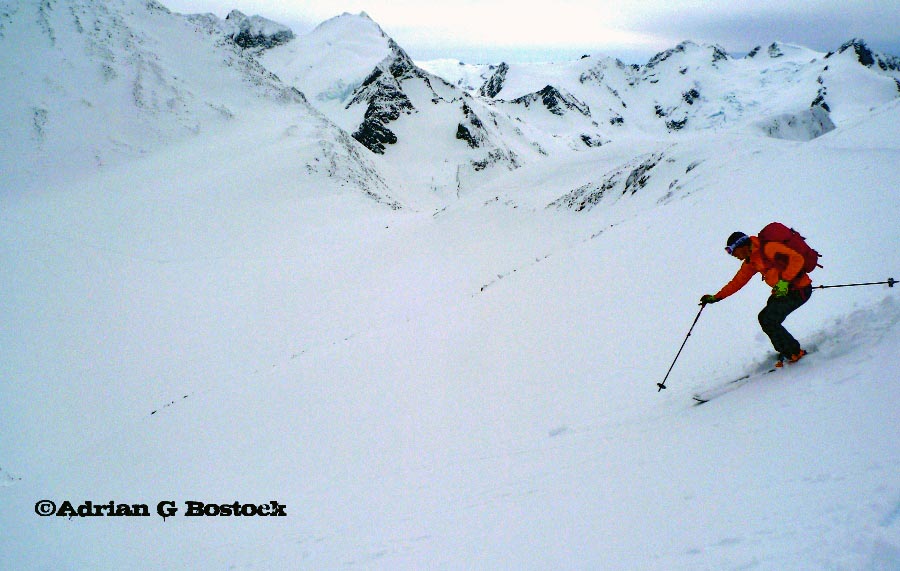 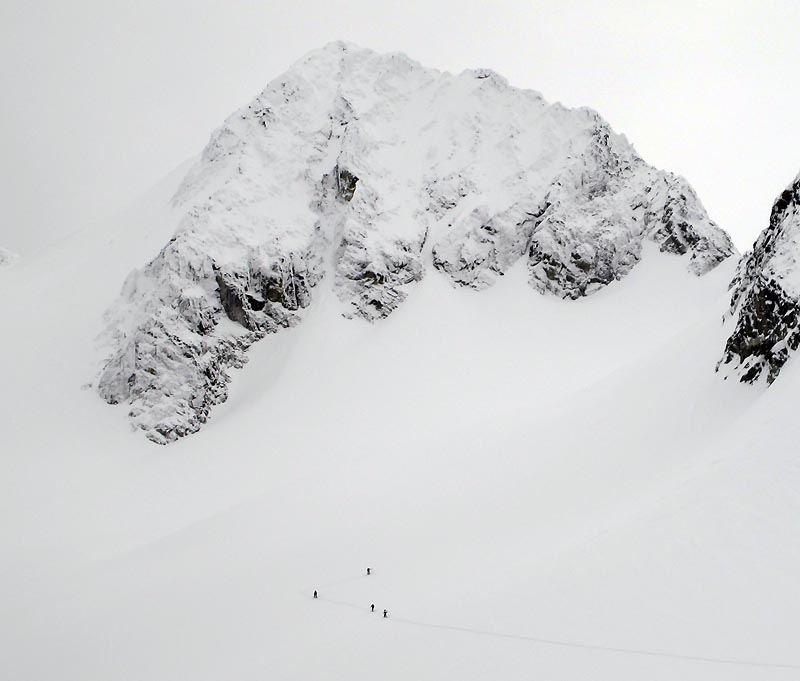 Vince, Alex, Jeff, Graeme in the lead group like little ants below Tremor 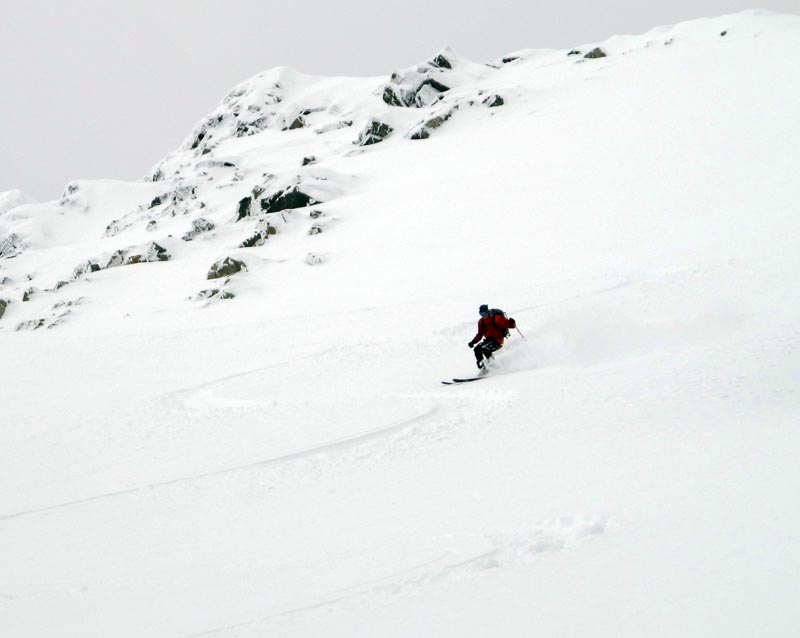 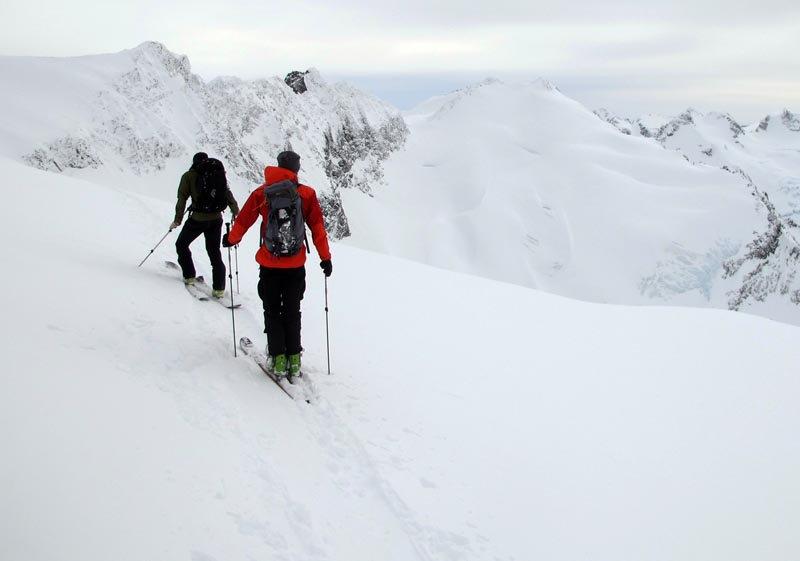 View of MacBeth and the Curtain Glacier across the valley 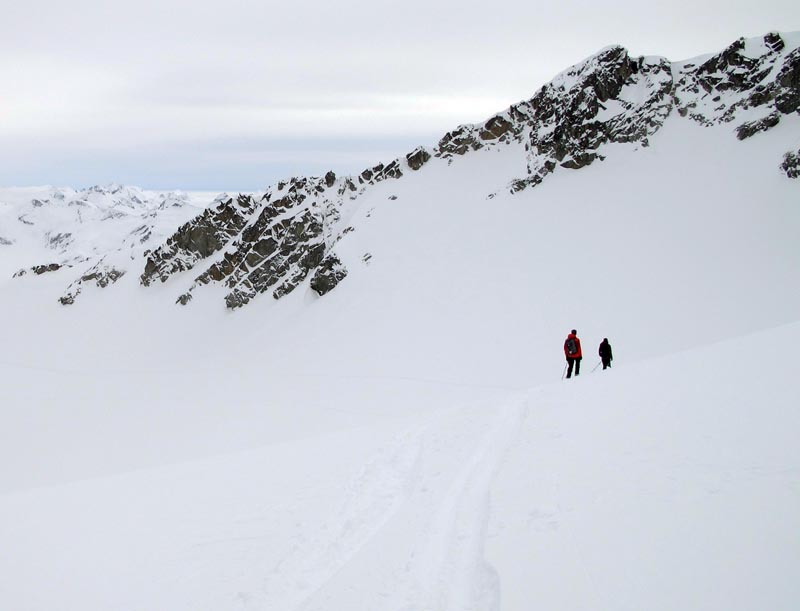 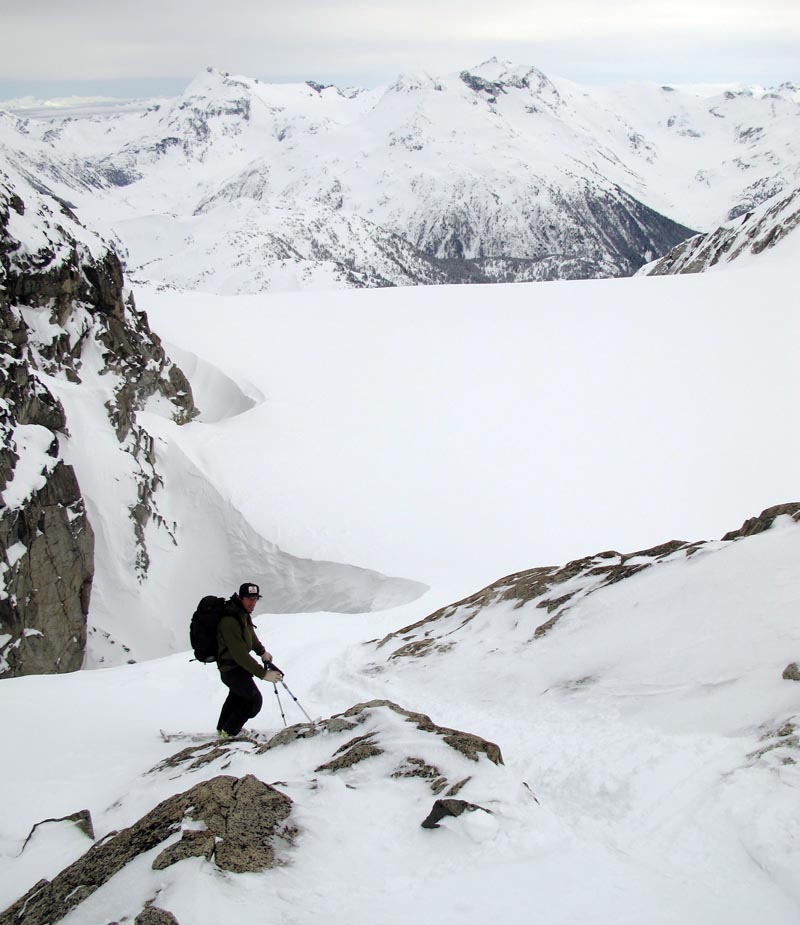 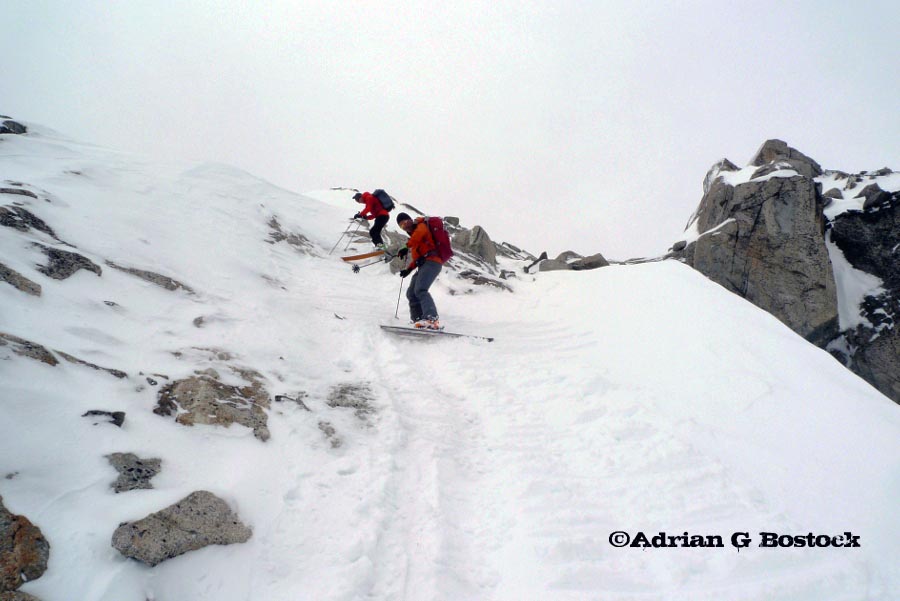 The difference between ski touring and ski mountaineering apparently 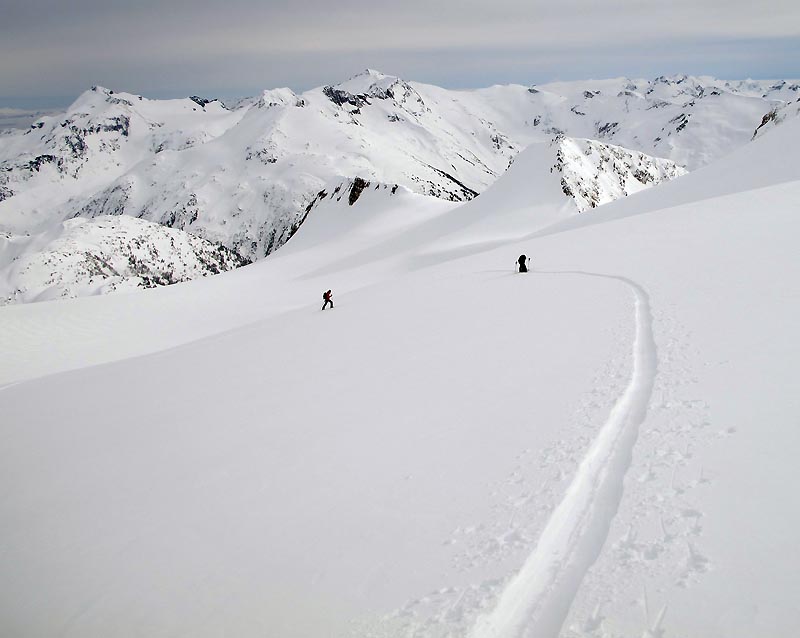 On the way to MacBeth 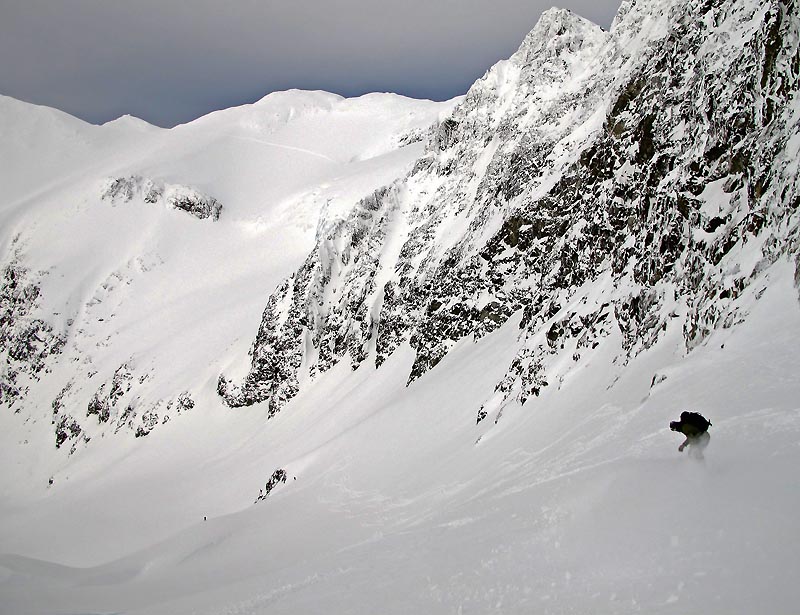 Time for Adrian to rip down the Curtain 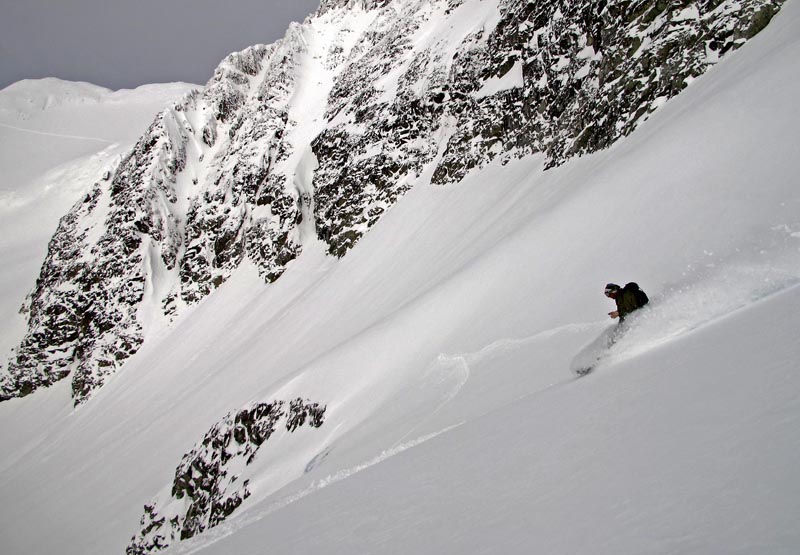 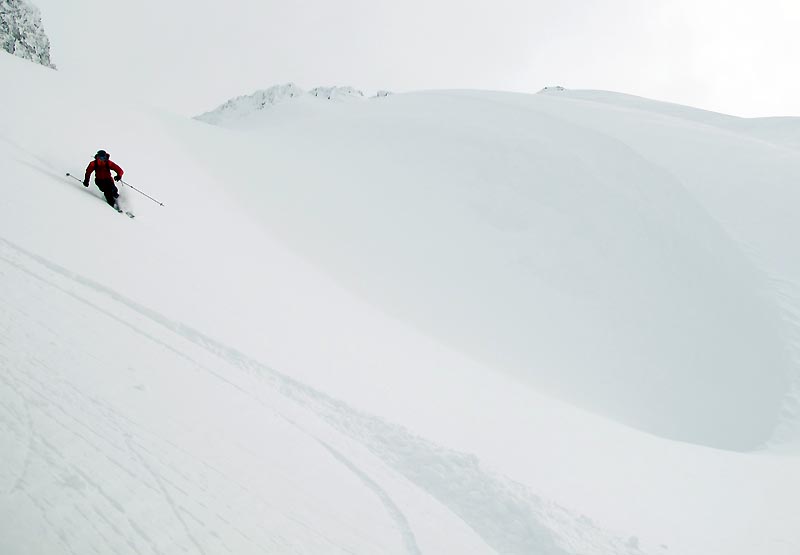 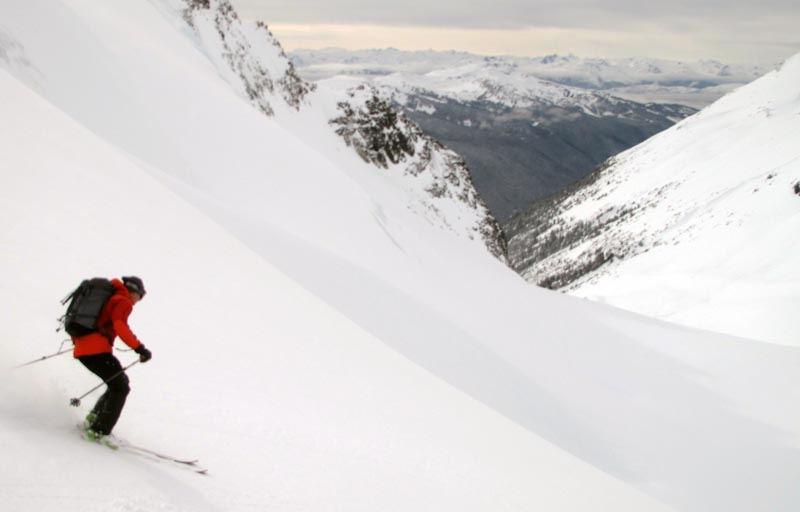 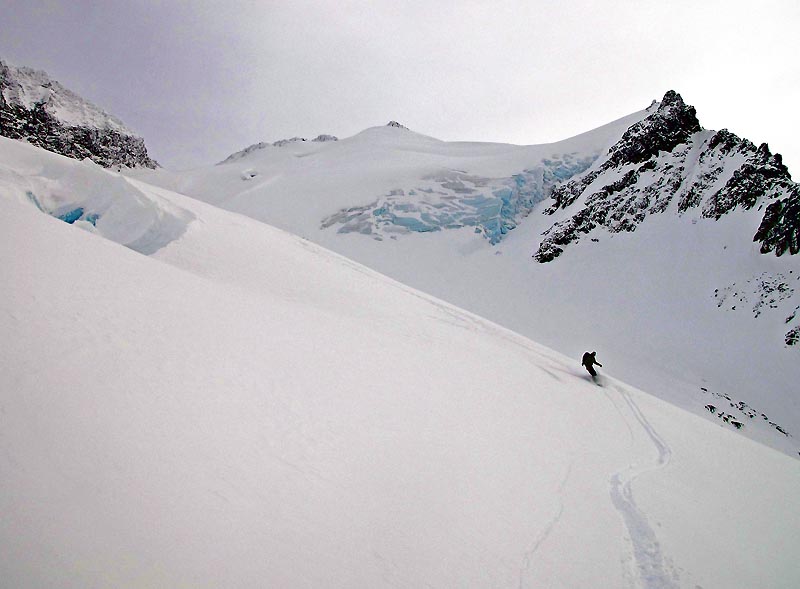 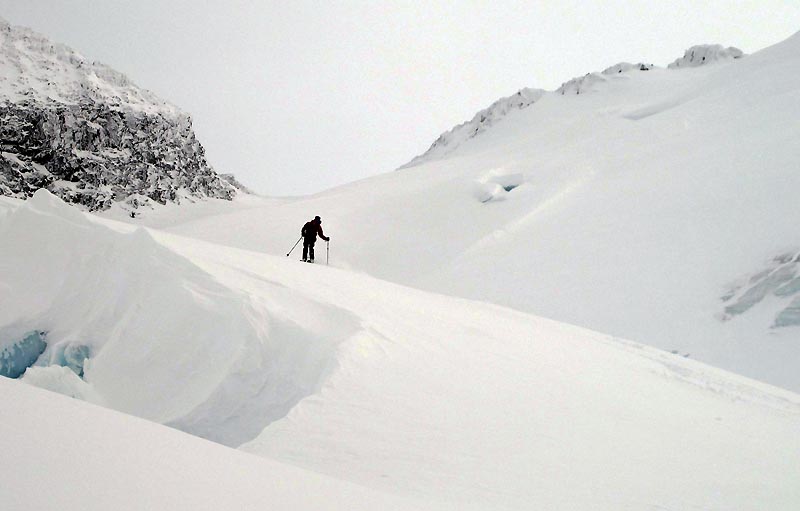 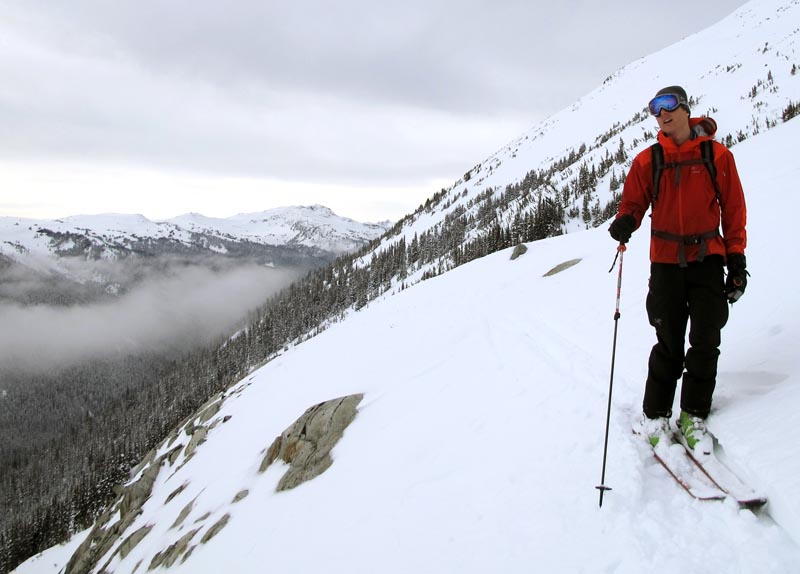 Stu not taking pictures of anyone, again 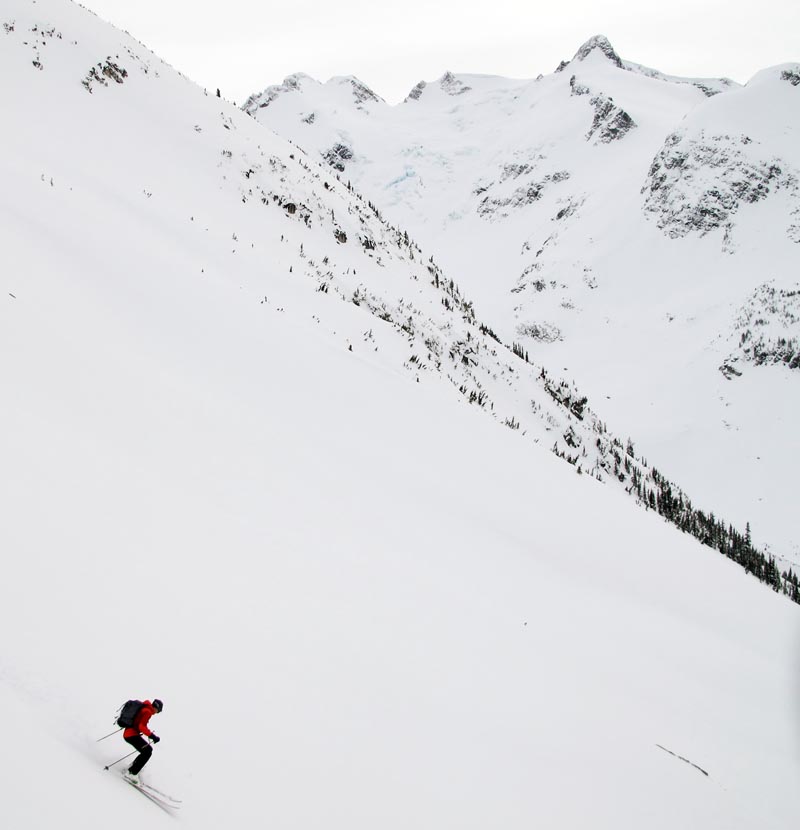 but being munificent and ever-giving, I will take pictures of Stu even though the effort will not be reciprocated 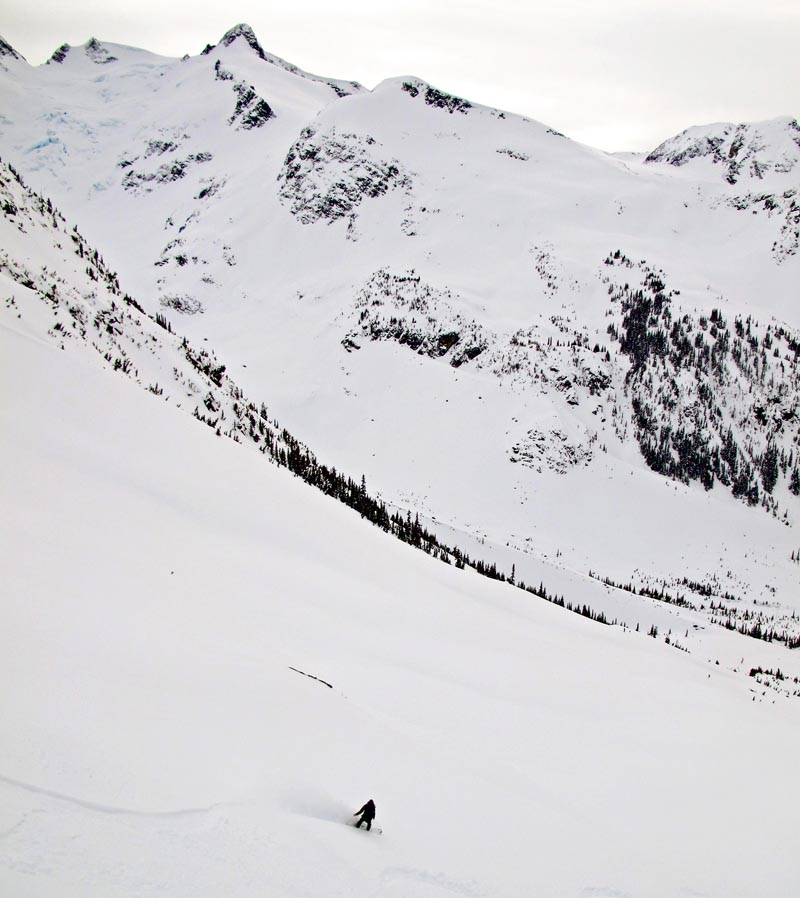 Adrian on the last leg of the Curtain moraine 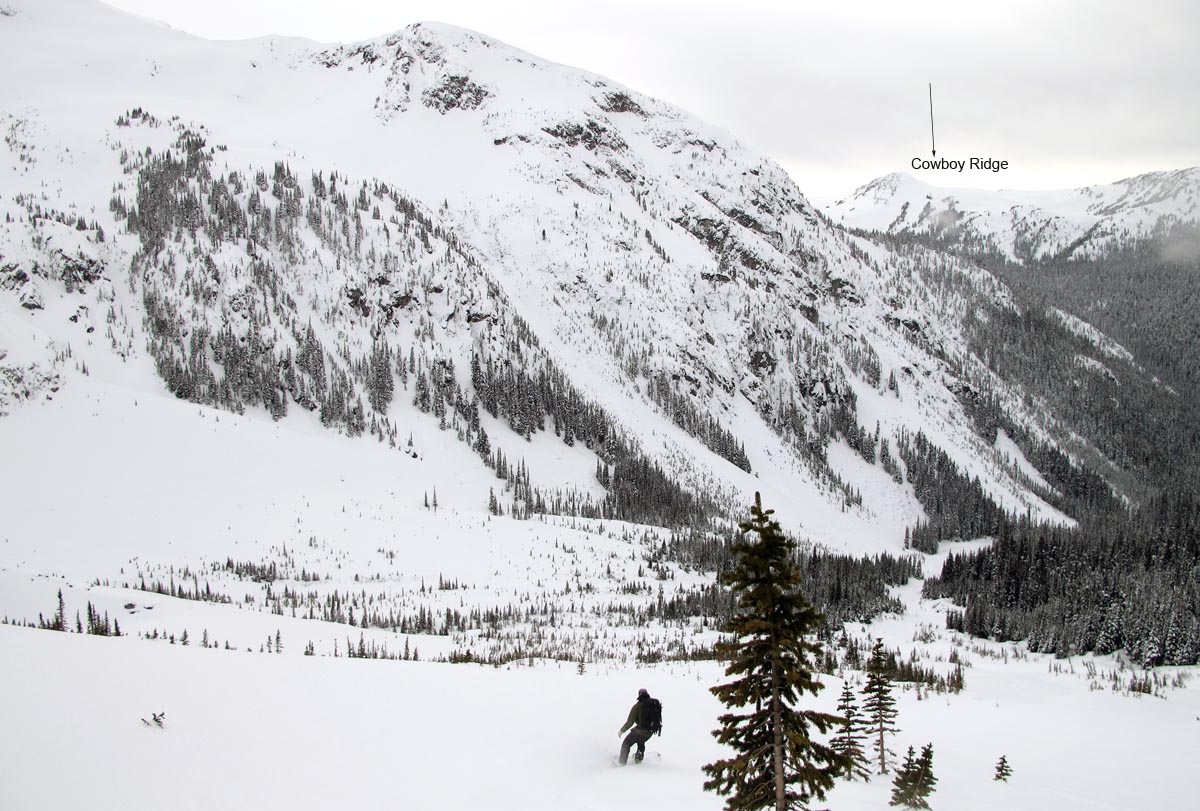 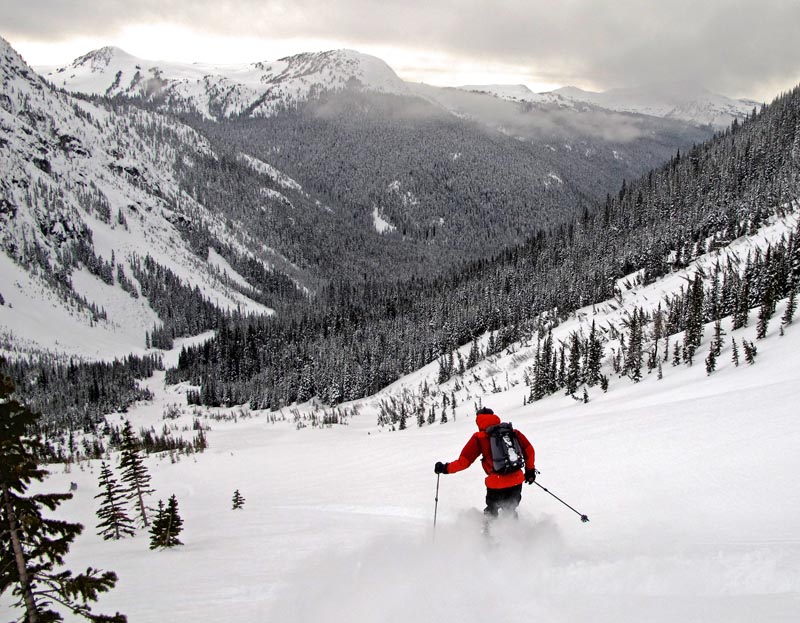 Maybe the bushwhack won’t be so bad at valley bottom 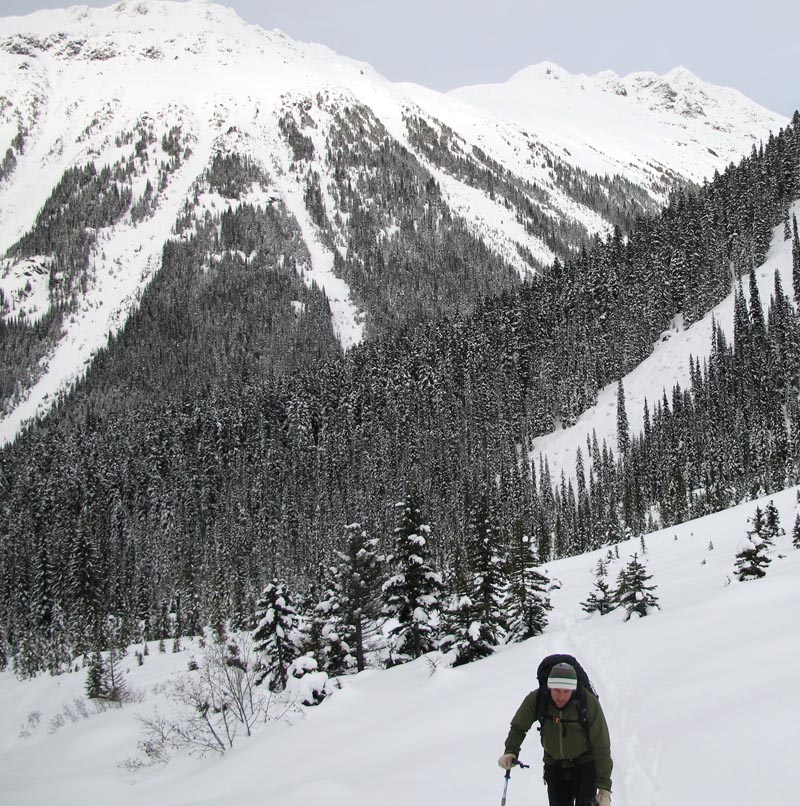 The bushwhack wasn’t actually that bad. The slog up from valley bottom to the Russett Lake moraine though seems to enter a time warp 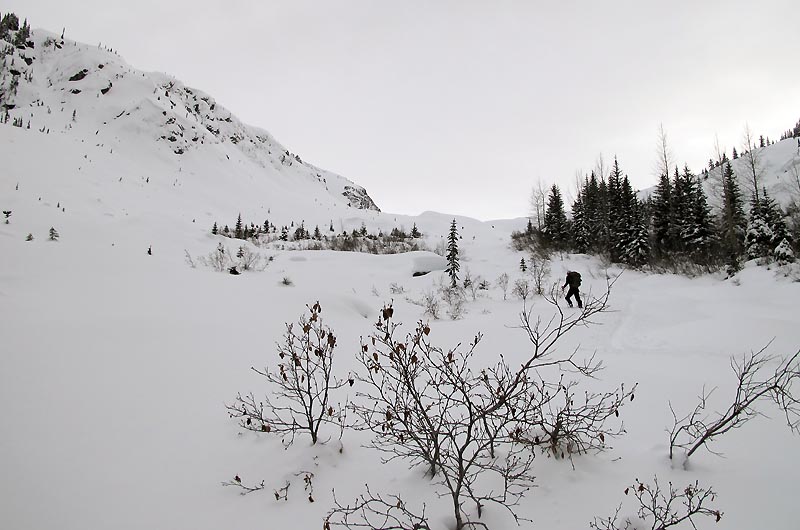 At least the slide alder keeps one company 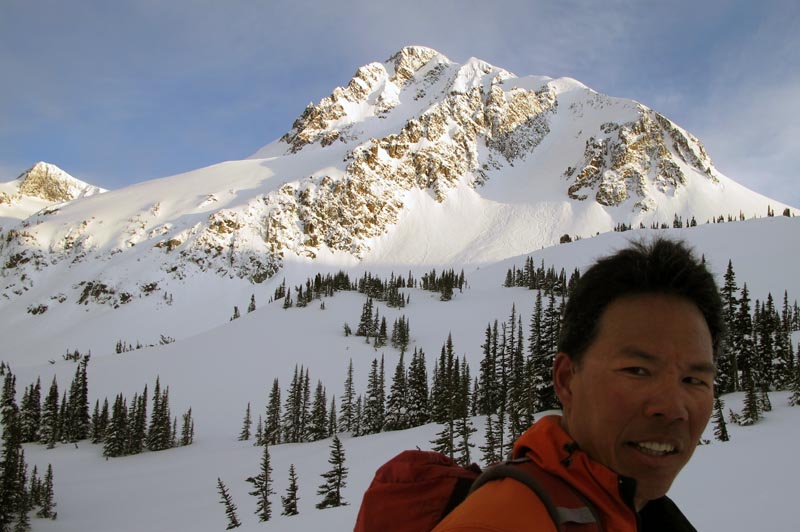 Anyone seen a ski, a green Quaatch toque, a lost Contour and perhaps a set of balls? 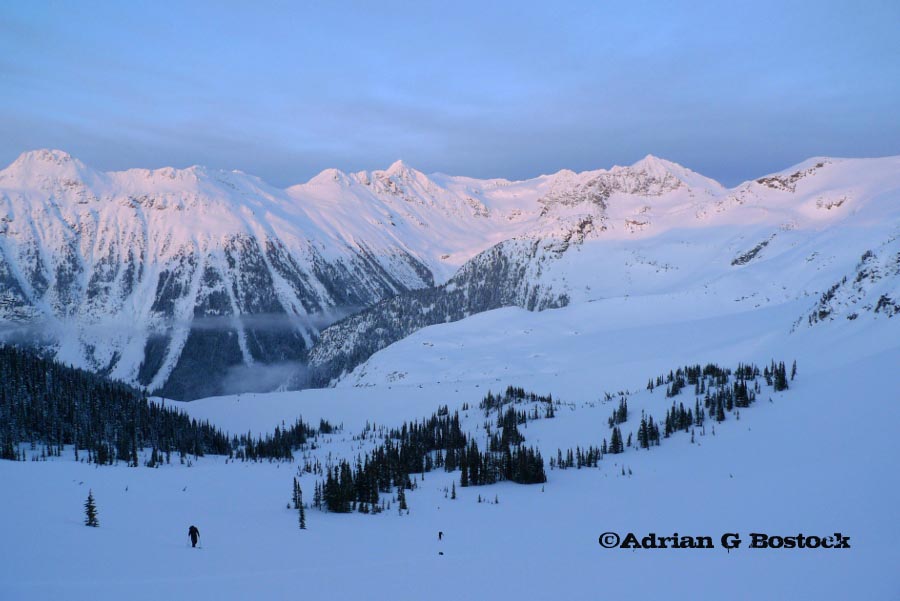 From where we came as the sun sets 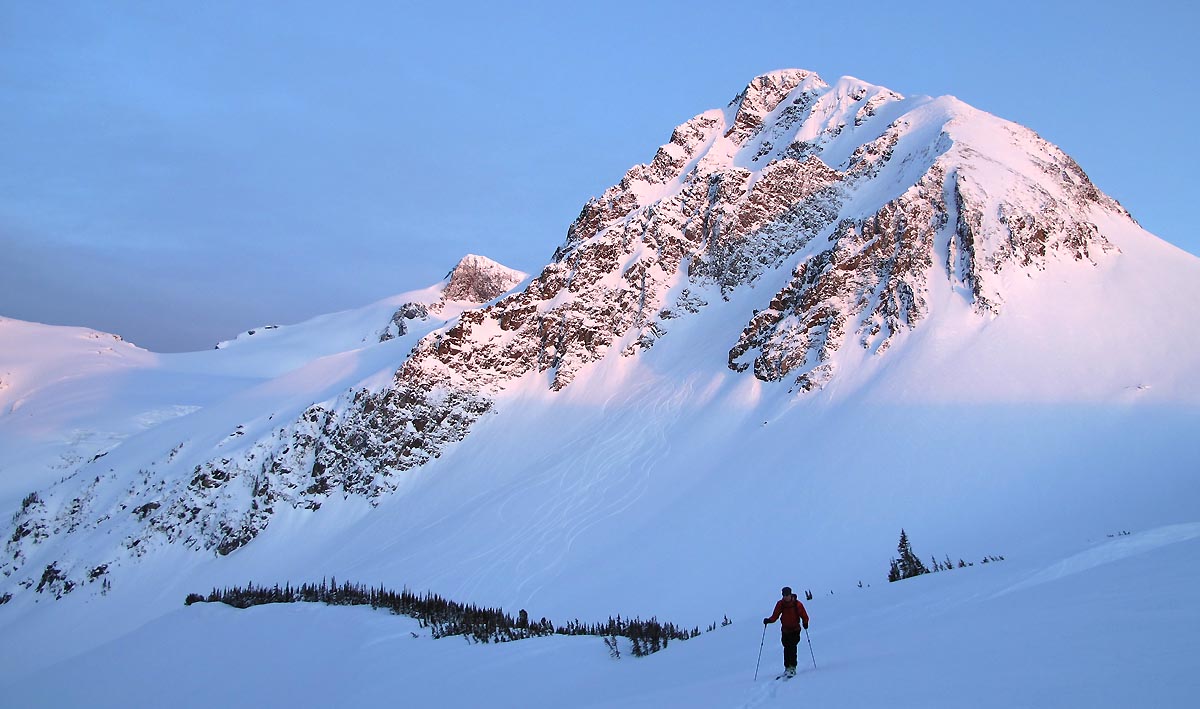 Cheakamus Glacier on the McBride range side of the valley 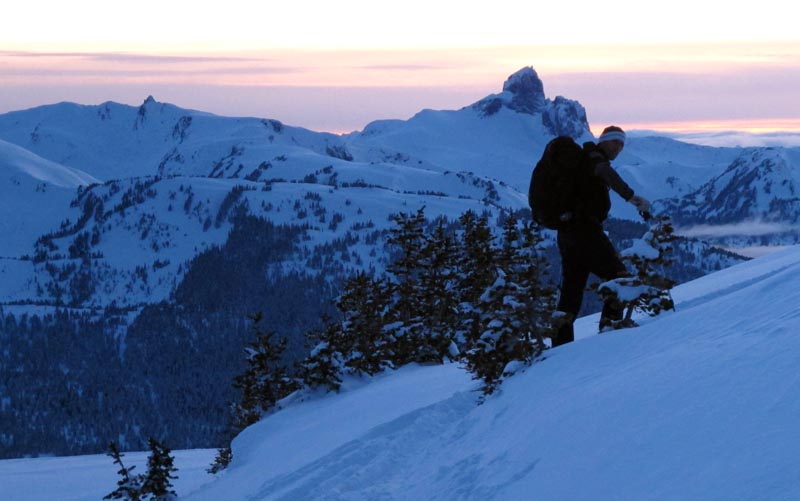 Adrian and a Black Tusk sunset 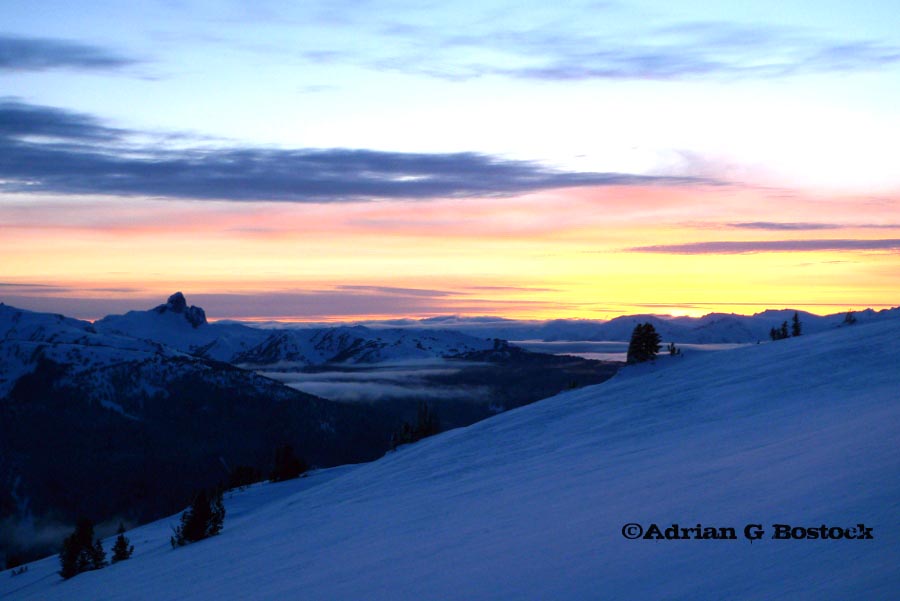