You can’t ride alpine epics every day. In between rides on classics like the Seven Summits and Idaho Peak we managed to squeeze in some pretty solid rides in Rossland, Nelson and Christina Lake.

I’ve already blabbered on at length about the diversity of trails in Rossland. They are fun trails, you can ride them right out of your door and even on busy weekends, you won’t see a lot of people. They’re also professionally maintained and in fantastic shape.

Panoramic view from Kootenay-Columbia looking west back to Rossland We rode right from Dave’s place south of town to K-C (Kootenay – Columbia) then proceeded to take in a sampler of Rossland singletrack. Creeks are in short supply so make sure you bring enough water – I didn’t and ran dry in the last hour riding back to town on the railgrade. 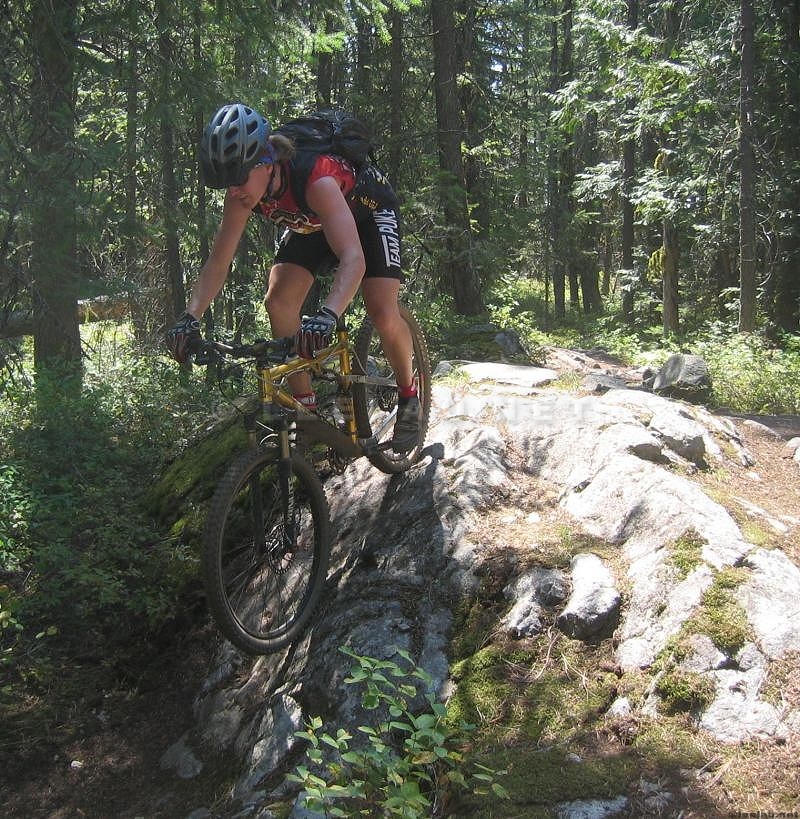 South of town, I felt like I was riding through Merritt or Kelowna trails in spring; it was that dry and dusty yet the greenery and presence of living vegetation showed me that I was a long way from riding the dustbowls of the Okanagan. Then as we went east then north of town, it got greener and greener and pine – lined trail beds started to remind me of Pemberton riding.

We ended our loop by riding down Milky Way, then crossing the Trail – Rossland highway. I almost dropped to the ground weeping at the sight of the “Green Door” – incredibly narrow singletrack just literally a few meters from a major road. If this was North Vancouver, skidiots would have made this piece of art 10 meters wide and braided and we would have had to put down gravel to prevent the trail from become a chundered POS. But this is Rossland and they understand wheeled art. 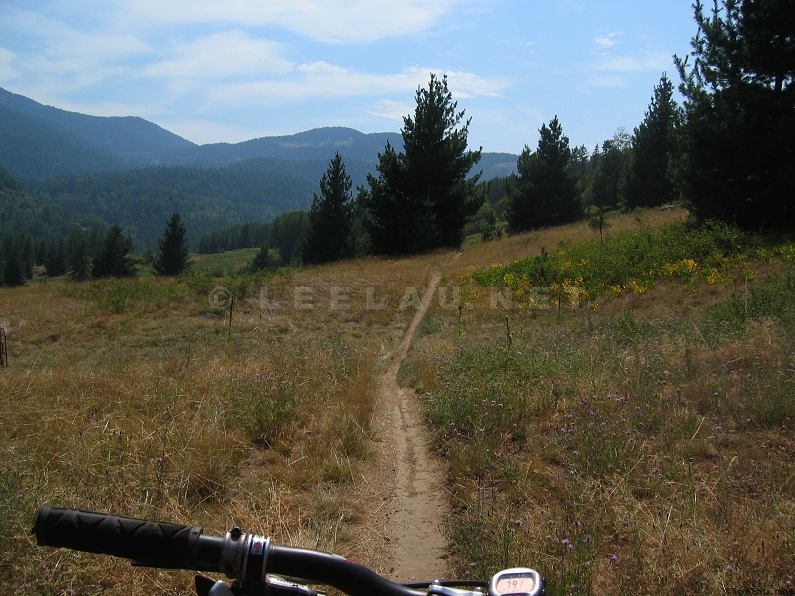 I haven’t ridden much in Nelson. Honestly it’s because they are shuttle trails and I don’t come to the Kootenays to shuttle – I have plenty of that at home. If I were really honest, I would admit that it’s my North Van bias, how could any Nelson trails hold a candle to North Van trails? Still of the rides I have done in Nelson, I’ll be the first to admit that they’ve all been a lot of fun. 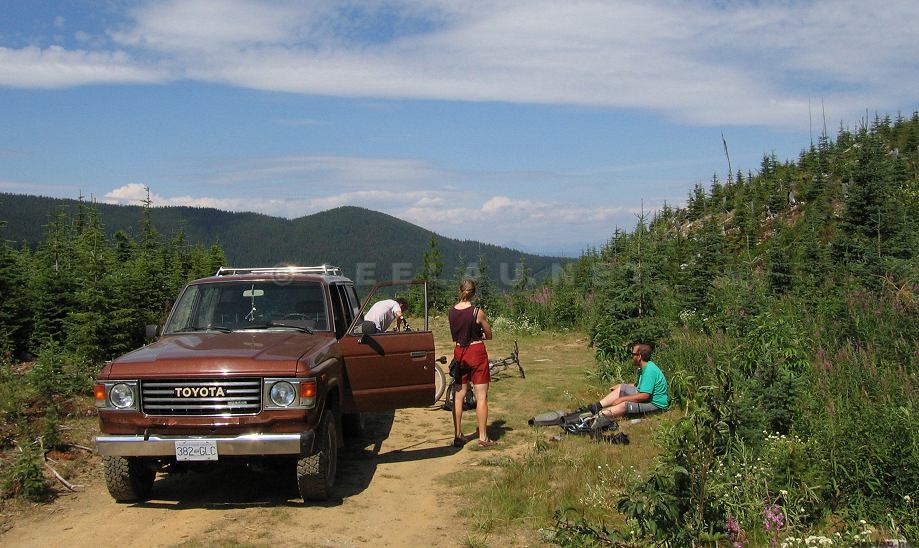 Shuttle to the top of Goldmember

I was fortunate enough to talk Aaron and Chris into a ride on a trail that none of us had ridden before. So off we went on the 1 hour drive to Nelson to ride Goldmember – a trail that is relatively new having been built a year and a bit ago. 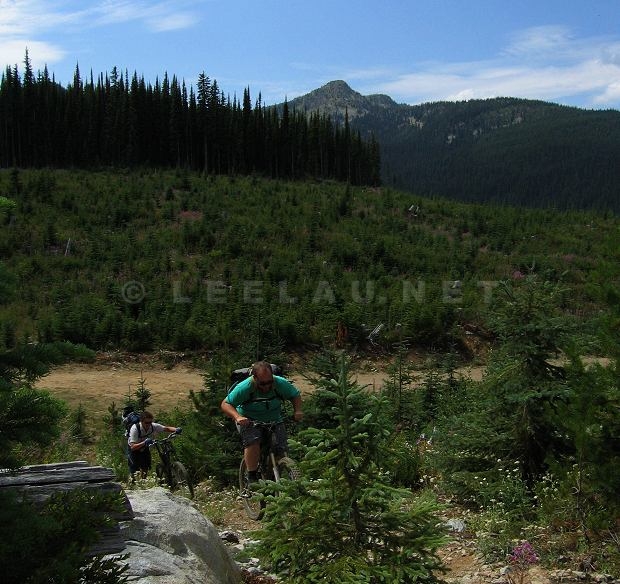 Goldmember is a really fun trail. The drive up to it is quite the task and we used all the clearance and low gears of a Toyota LandCruiser. The view from the top looks to Kokanee Glacier Provincial Park – always a treat. 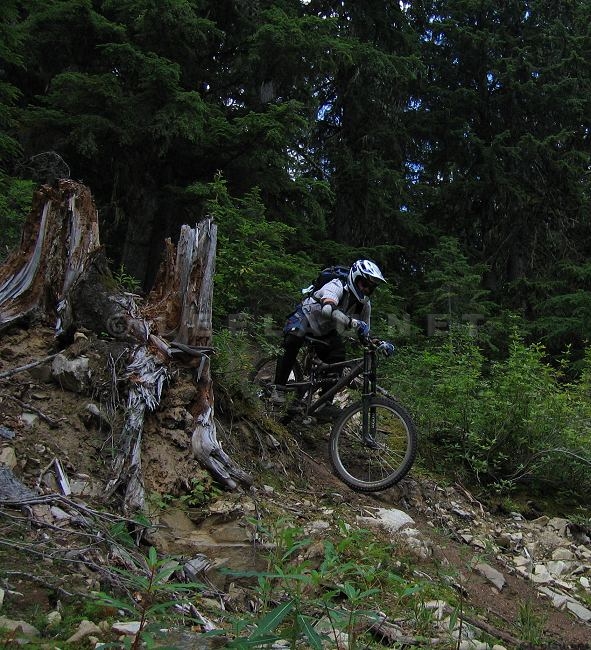 Chris on the upper section of Goldmember

I had put a bigger tire on the front of the Fluid but hadn’t bothered to up travel to 6″ on the front. That setup worked very well – the trail was pretty steep but the trailbed itself was in pretty good shape given its fall-line nature and given soil conditions. The odd section was rutted but by and large, we were riding on soil and not rocked-in paved and laddered construction that popular North Shore trails have now become in order to deal with traffic. I would guess that Goldmember doesn’t see a lot of traffic – helping keep it in good shape. 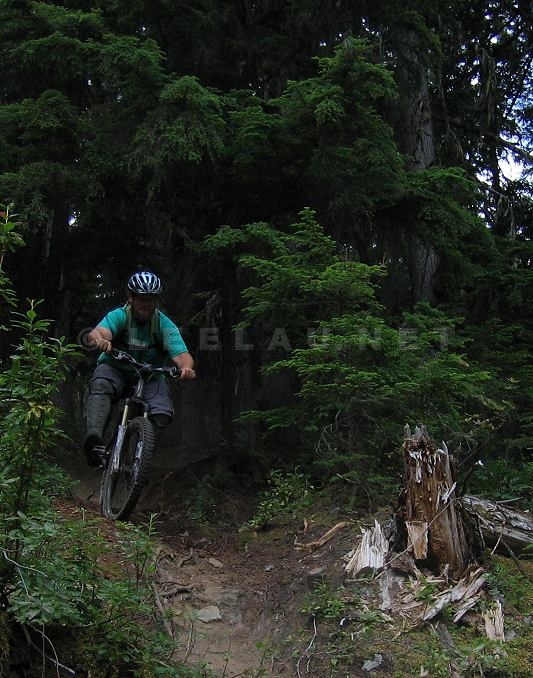 Aaron worshipping at the church of the loamy and steep

Goldmember has an Upper and Lower section split by the logging road which we took to get up to the trail. Navigation is pretty easy. Don’t expect to find any water so bring your own. 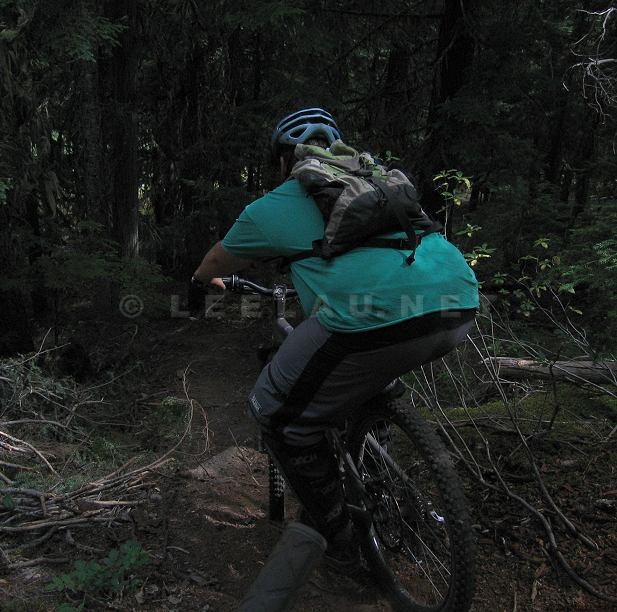 Dropping into a chute on Upper Goldmember

There are some views on this trail but they aren’t like the views I saw on 7 Summits or later, as on Idaho Peak. I am told that other Nelson trails such as Upper Hitman have better views – will have to come back and find that for myself I suppose. 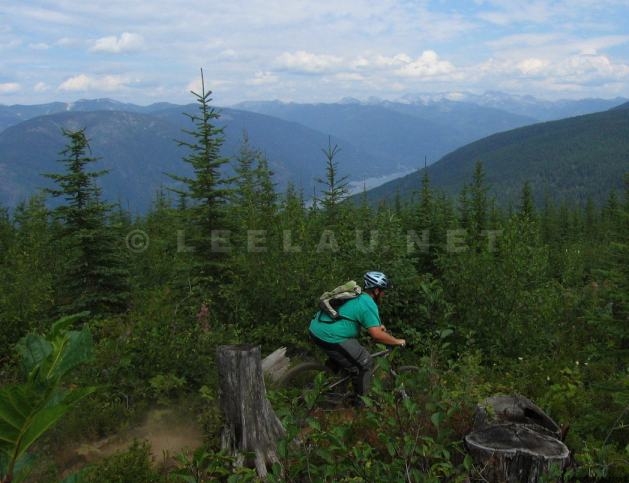 Kokanee Glacier viewed from the top part of Upper Goldmember

Lower Goldmember continues in the same vein as Upper. Just keep your speed under control as the turns and trees get a bit tighter 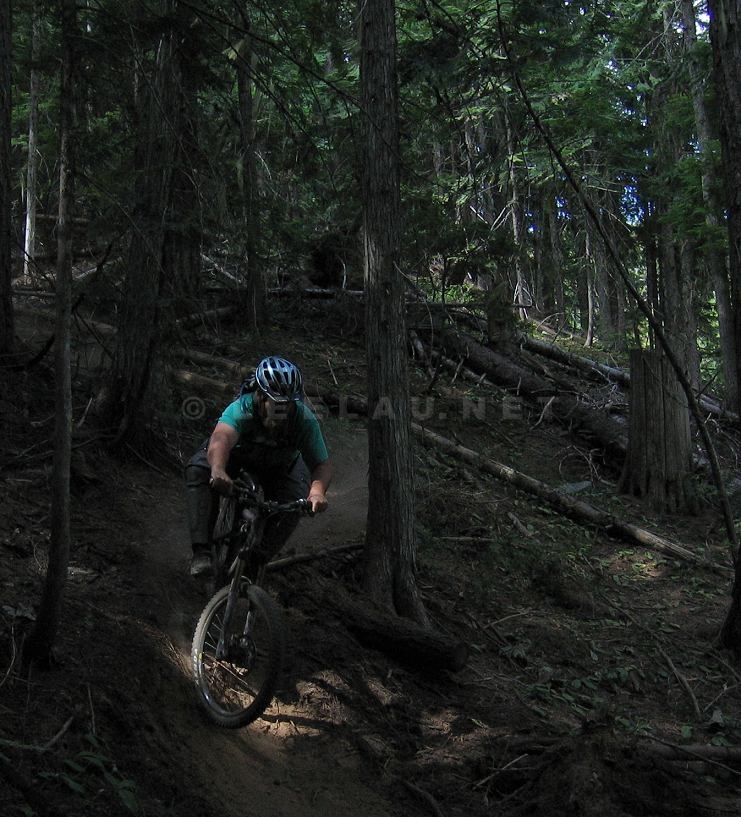 There are beautifully constructed jumps on Lower Goldmember. They aren’t all that large (perhaps 3 feet at the most) and set up nicely for subsequent sections of trail. Don’t take them at speed and have a blast. 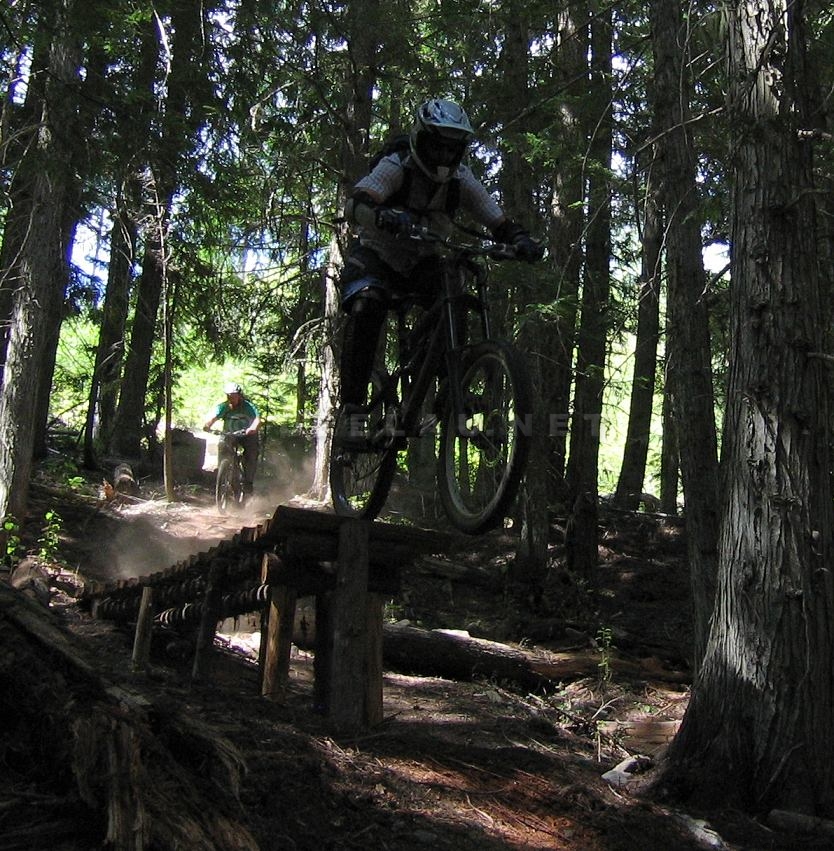 Not too much to say about Christina Lake. We rode Deer Point trail – which is fast and scenic but hardly what I would call alpine. The highlight was meeting and riding with Steve and Rose. Steve is really really fast and rides a RM Slayer well beyond its design parameters. Riding at Christina Lake got us a little closer back for our drive home. 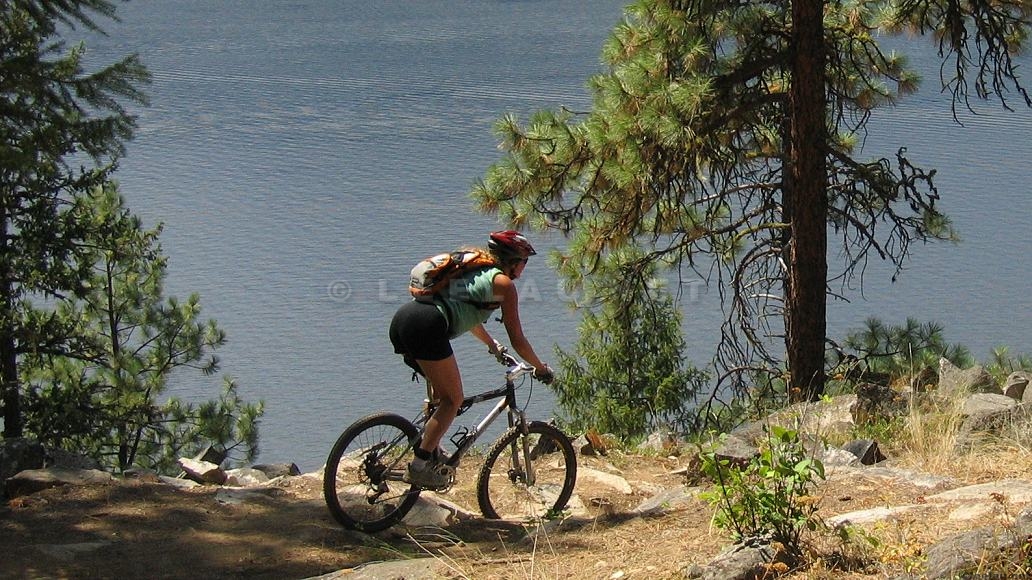 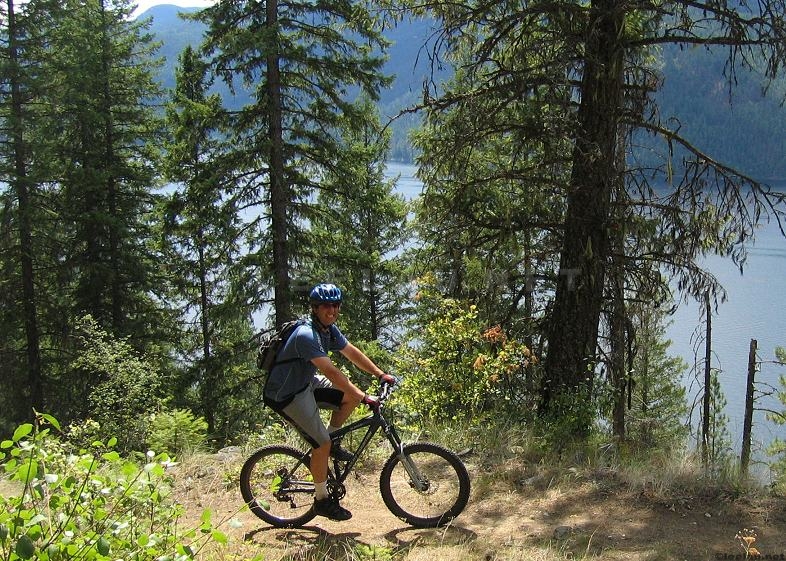 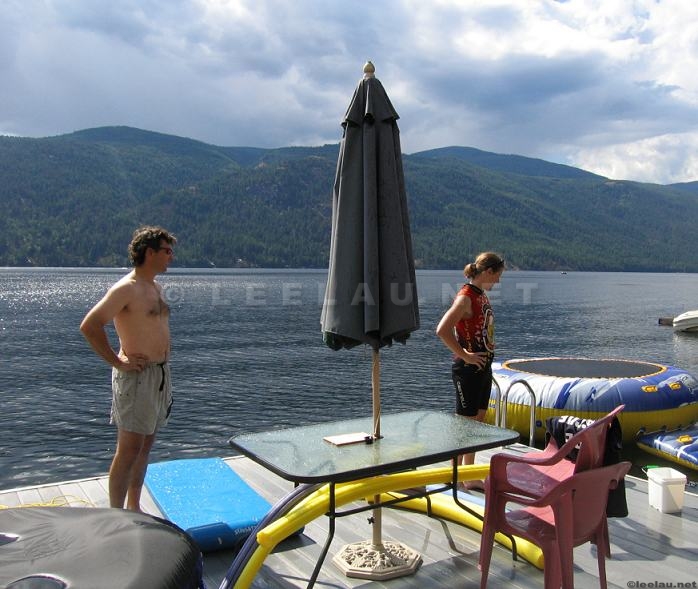 Post ride Christina Lake – a logical place to hang out 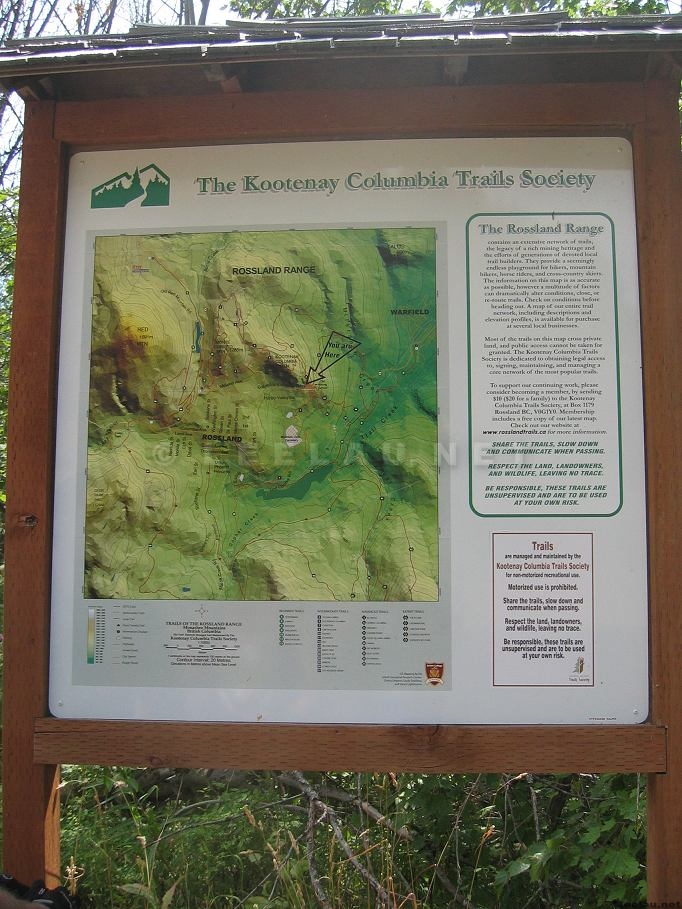 This entry was posted in 2006, bike and tagged Christina Lake, Nelson, rossland. Bookmark the permalink.