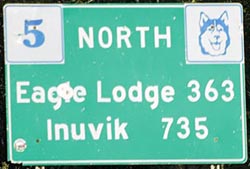 In 1958 they started to build the Dempster Highway; a 735km road from Dawson City in North-central Yukon to Inuvik in the North West Territories to facilitate oil and gas exploration. The Dempster Highway was going to be the link to the North. The promise of oil at Eagle Plains started it all, but construction stalled due to lack of insight, collaboration and lack of oil at Eagle Plains.

Then in 1968 the Americans found oil in Prudhoe Bay. To ensure Canadian Sovereignty in the Arctic the Canadians pursued construction of the Dempster once again. The two lane gravel highway officially opened in 1979, the first Canadian highway to cross the Artic Circle. It is built out of 1.2 to 2.4 meters thick of gravel overtop the permafrost to prevent the highway from sinking into the ground. Named after William John Duncan Dempster, a dogsled patroller who travelled the route between Dawson and Fort McPherson previously used for centuries by the Gwitchin Indians as their route between the Yukon and Peel river systems.

We used our Toyota Tacoma on this trip. A great — reliable —- vehicle that offered flexibility to explore the Microwave tower and gravel quarry roads along the Dempster. These areas can also be used as campsites. If you drive the Dempster it’s a good idea to keep your gas tank at least half full since gas stations are few and far between. We carried an extra tire, but fortunately didn’t need one. If you drive cautiously you shouldn’t have a problem on this road. This handy Yukon Tourism handout served us a guide( Dempster Highway Travelogue). as did Walter Lanz’s “Along the Dempster” guidebook, which we used as definitive.

Day 1 – Driving from Whitehorse, gas in Dawson City and camping in Tombstone Campground. 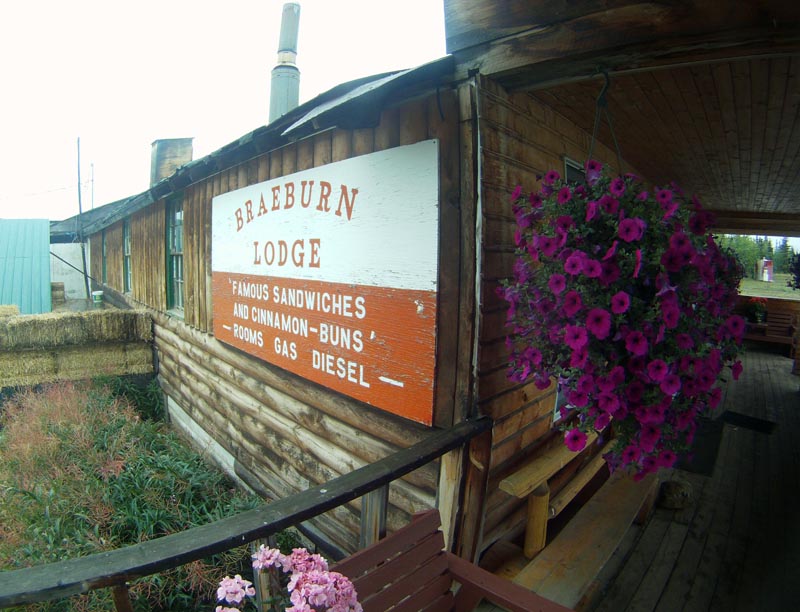 First stop is always Braeburn Lodge to get one of their famous Cinnamon Buns! 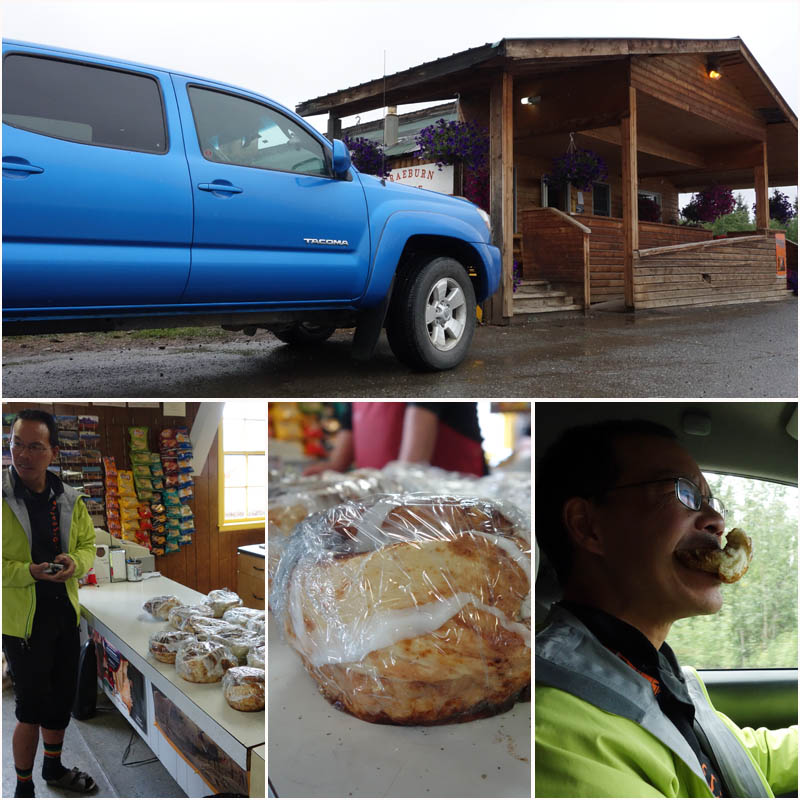 It takes two a while to eat these beasts! 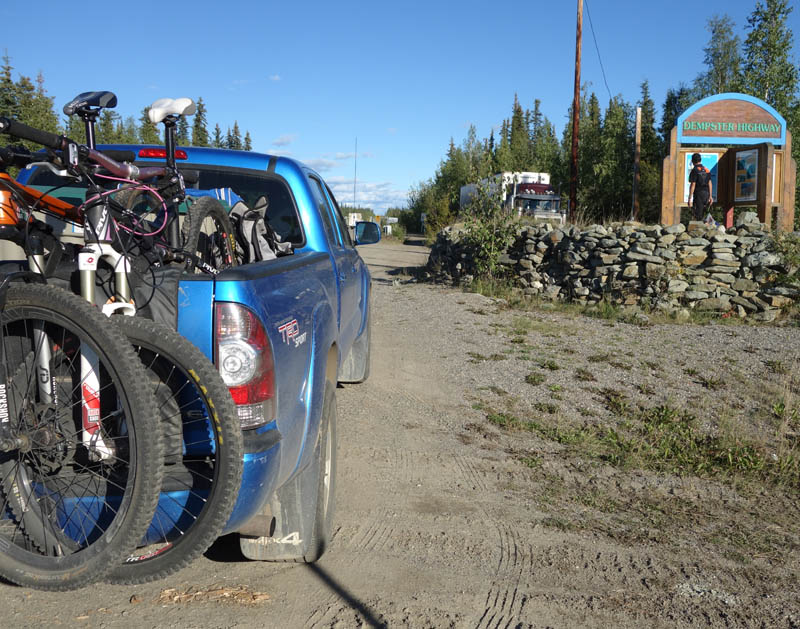 Then we arrive at the start of the Dempster Highway.

Note – the gas station that used to be at the intersection of the Klondike Hwy and the start of the Dempster no longer exists. You have to get gas in Dawson City 40km down the Klondike Hwy, adding an extra 80km to your trip. Or you can take your chances …. 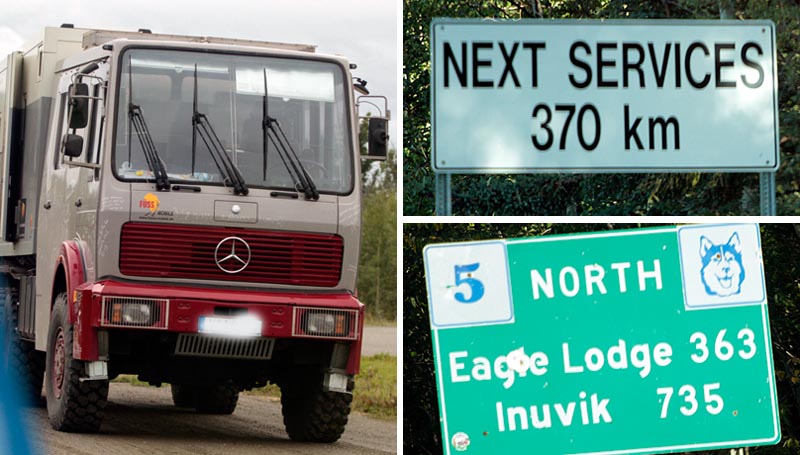 Some people drive very big vehicles! The Euros in particular love the big trucks. We did see lots of smaller RV’s and PU trucks. 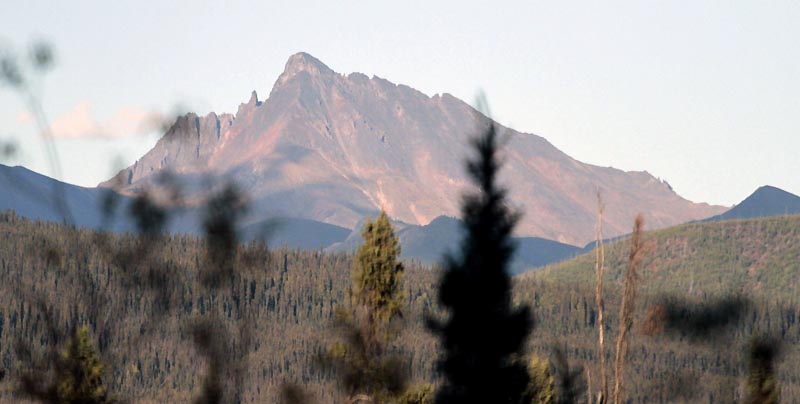 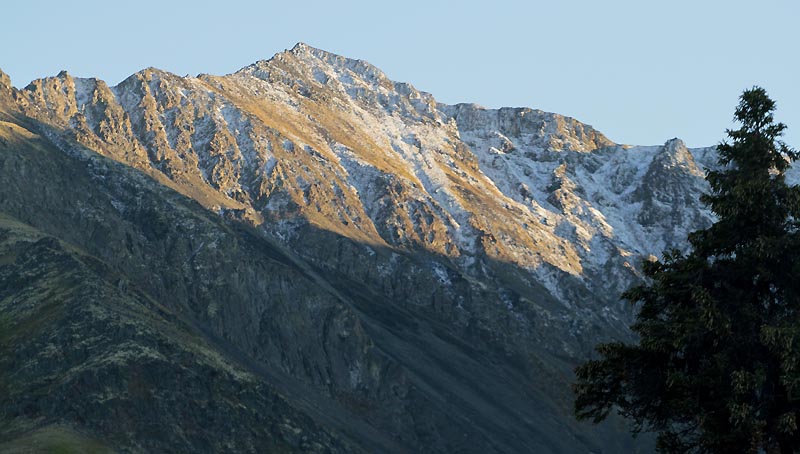 Fold Mountain as seen from our campsite. A light dusting of snow fell during the previous days. 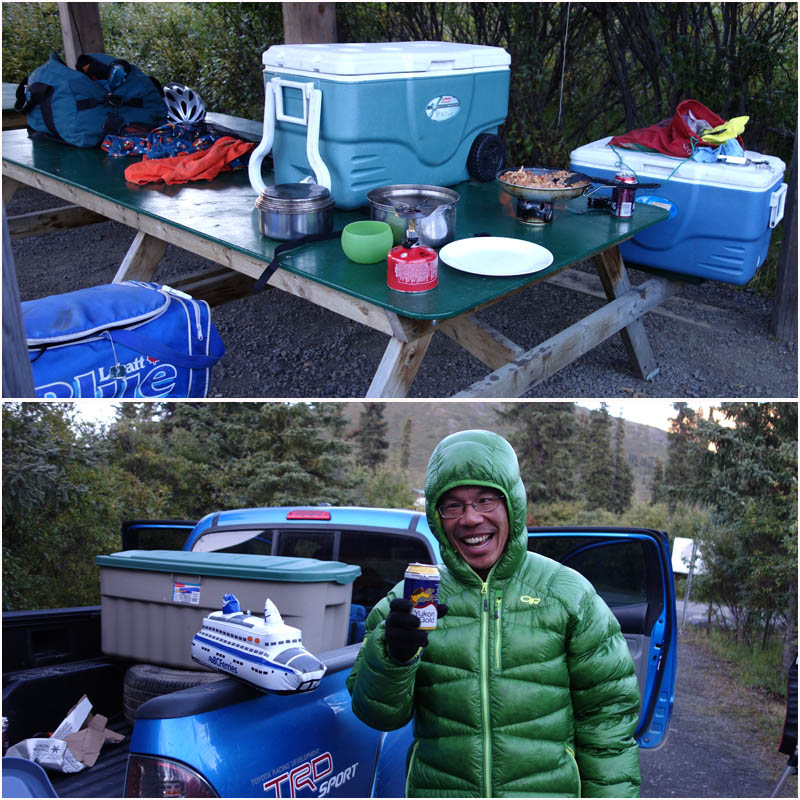 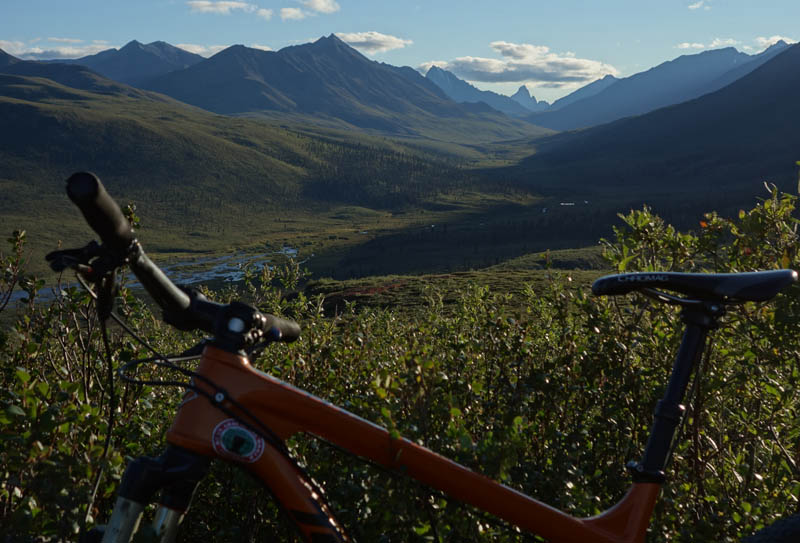 Turner Czar at the Tombstone Lookout. 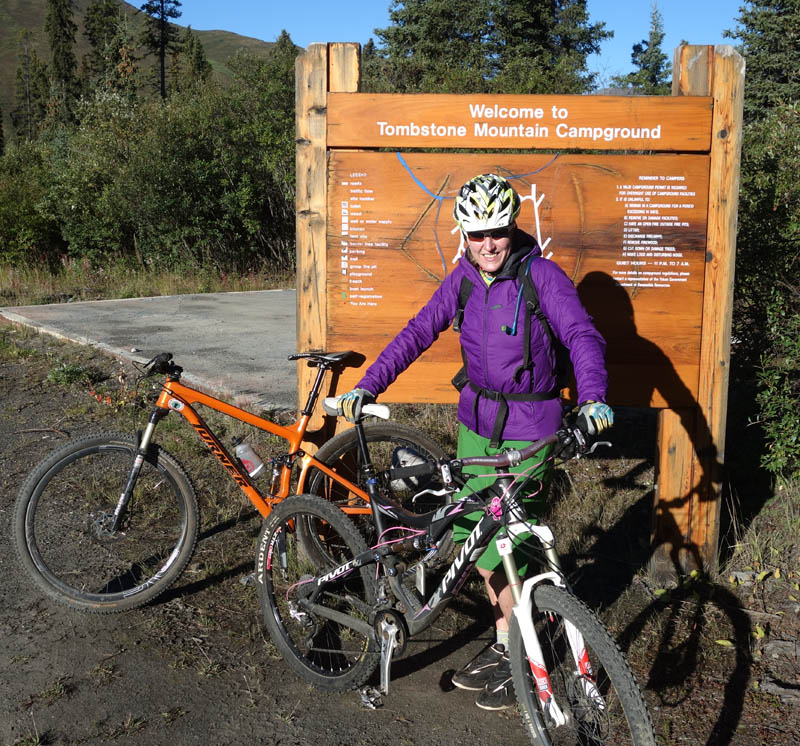 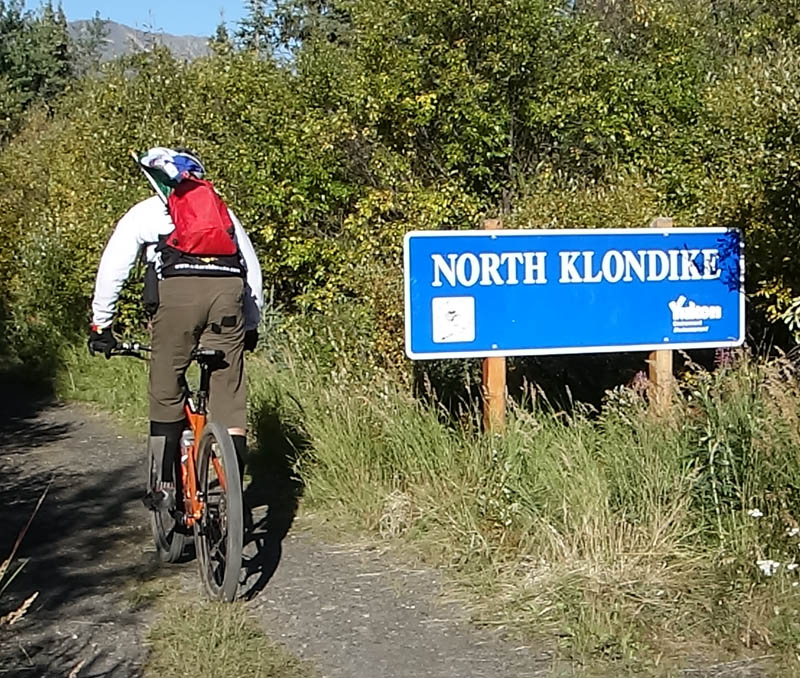 Since this area is mostly permafrost, when the ground melts it gets wet and lumpy, the best trails to ride lower down are gravelled, or you have to get above the permafrost. 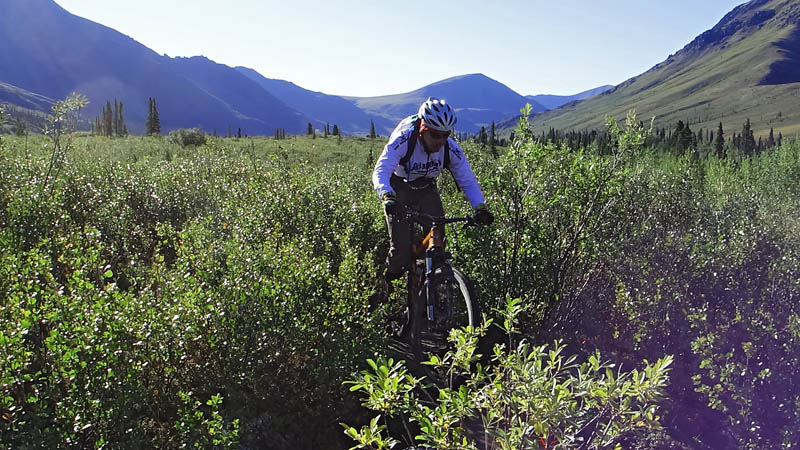 Willows are quite prevalent lower in the valley. Long socks are good to prevent scratches and to look fashionable. 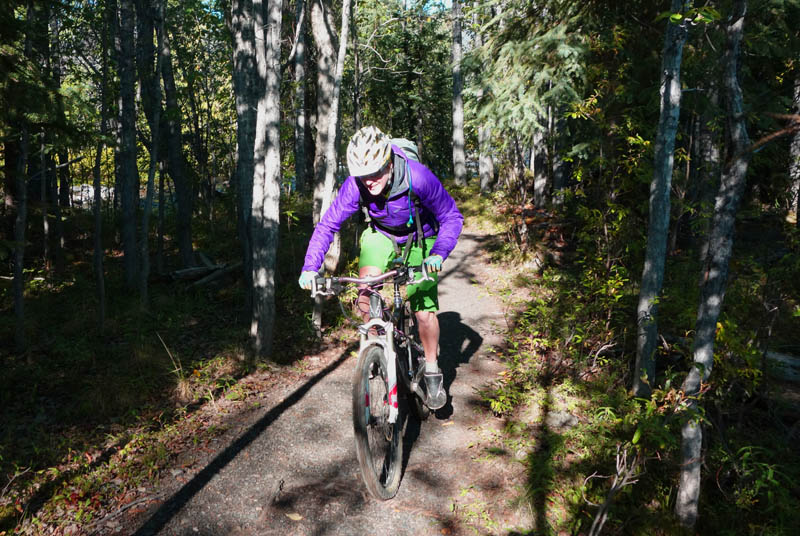 Nice section of trail on the North Klondike River.

On day two we drove through the Blackstone Uplands (72-158km) through Windy Pass at 152.8km into the Ogilvie Range and camped at Engineer Creek at 193.8km. Most of the hiking is in the Tombstone range. Walter Lanz’s book is the best resource for hiking along the Dempster.

That follows in the next installment

This entry was posted in 2013, bike, yukon road trip and tagged BC Ferries, Dempster, Northern BC, yukon, yukon2013. Bookmark the permalink.